As the new lock requires an incompatible patch, do you guys(everyone) think that concrete objects should have a little more grip? I don't know, maybe like 10% or something? They're quite slippery compared to normal road and people use these objects to "simulate" new road layouts. So i think it would be useful if rest people agree as well.
Gr1jkeeRU

Sorry for a such bump and offtopic, but instead of tune current cars (and probably ruin hotlaps), better to add "D-Spec" cars? I mean the same chassis' but slightly tuned, like drift cars is. Wider wheels, a little bit more power and steering angle. ~310hp on 235f/245r wheels and 45 degrees of lock is perfect setup. Also can be released as S3 content, so people who bought it will have something besides Rockingham and will motivate those who still didn't. Talking about model, you can run a competition so 3d artists from community will be able to show off their skills.

That's why it has suggested before: Tarmac objects, or possibility to change grip value on each object

May I ask why in external view, map changes to black insted of being white like in others view?

It's a bit hard to check map in some zones of map...

Apart from this, nice update!
Sobis

Or here's my other idea - each car to have a drop down menu with different options - track/drift/rally.Each option will have different tires/suspension/look etc.Setups will stay,but you will create the different setups under each of these options.This way hotlaps should stay.
Whiskey

I pray for the realistic limited set up of the car setup that was once supposed to be implemented.

Scawen, please, could it be possible to have it as a part of the incompatible patch?
PeterN

The devs wont be adding any new content before the tyre physics and even then they already have a ton of stuff planned.
Flame CZE

It doesn't work on open configs only, but yes, I guess it should work there too?
borja_s13

I didn't changed this value at any time. Maybe it comes changed with update, but lot of thanks for your help, I changed it to white, thanks <3

From other side, I noticed that Westhill minimap have small white line at the top of it.
Whiskey

It's always been like that. In internal view it is white because door frames are black, externeal view uses black to contrast more with the blue or cloudy sky.
Flotch

Make on the mini map yellow flag zones.
Look like this: 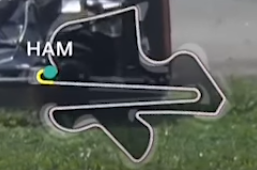 A demo user that made a good suggestion. I've seen it all...

You could create some kind of penalty system for overtaking under yellow flag.
cargame.nl

This is a task for InSim, open layout doesn't have yellow flag on it's own because node/path system and speed data is missing so it's quite limited anyway.

Talking about minimaps, it would be cool to be able to attach an InSim action to RMB if you click on a car arrow. This is handy for streaming where you can immediately can switch to a different camera perspective in a situation that an accident is happening but it's unknown on that moment what name this racer has. I can imagine some admin functionality as well with an InSim menu popping up about the conn_ID of this player.

Be able to influence the colors would be nice also. In case of multiclass racing. GTR and GT2 colored green and red, leaders different colors (overruled and managed by InSim).. If something dangerous is going on you can make the arrow flash by alternating the color by InSim. And probably some more fun stuff which I cannot even think of.. Let one arrow flash others need to chase/seek this person, that kind of concepts.
Last edited by cargame.nl, Sun, 15 Jan 2017 12:51.
vitaly_m

I think the best would be to have (configurable maybe?) outlines with opposing color (white map + dark grey outline, for example), that's the only way to make it work in all those tricky cases -- you can have both dark and light backgrounds, especially if you combine tunnels and bright sky.

And off the topic, are there any plans with layouts? More objects or precision? For couple years already I keep hoping for some kind of kerb object in layout editor, because using concrete or speed bumps does not really work for all the scenarios.
mmaa623

Probably been suggested multiple times, but, it would be awesome if we could create custom minimaps for layouts we have created!
BeNoM