But eehh I am not going to make a very big discussion out of it in this topic, it's not worth it.
Litro

Any other new Dashboards?
DANIEL-CRO

Well, I'm not quite sure that dashboard backlight on newer cars is affected only by lights, I guess I have some kind of light sensor built into aswell... So for now I made that its backlighting off with ignition.

Before release I've talked to both Scawen and Victor about the features of program. I can easily remove it, if that makes you any happier. I don't wanna that this kinky stuff is hiding programs real worth.
Fuel can be retrieved from both memory and by packet sniffing. As you can see from some posts above this is known and used for very long time now. Then again what good does it make if small amount of people have such an info...
P.S. If I don't instantly reply, that doesn't mean I don't want to. Tommorow I'll be practically whole day away.


For now 1303s_vortech has made UF1 and MRT, recently I've improved my XFG and started making some XRG on the weekend... Honestly I hoped for much more interest in making dashes, isn't it enough that I've made the system, now I've have to do textures aswell (1303s_vortech is only exception)

It's already out now so it doesn't matter. Memory hacking you have basically with all games, but there is a difference between publicly known or being just known on the darker side of the internet. I just wanted to speak out my concerns about this ongoing degradation of racing. It doesn't make me more happy or less happy, I already know the racing scene is going to end sooner or later @LFS and developments like these only acknowledges it but what I don't want to read back at a later stage is things like "why nobody never mentioned something about it??!". -Fuel cheating- which I think is/was something in the wild, could easily be prevented by CPW in my believes, so I think it's the wrong excuse to bring such an option like this 'on the market'.

Have a nice day tomorrow

This custom gauges stuff should be implemeted right into LFS, just like your texture optimizer

I'll probably work on a XR gauge when the next version is out.

EDIT : @Daniel : Please do a correct XR positioning for background (align the 3 little gauges and let people move gauges everywhere (like the fuel gauges on the closest little gauge (left one in LWD). PM me if you need more explainations

I'm getting the same error ("Lazy - Overlay : Cannot create dashboard (EN). Another program already hooked LFS?"), did you fixed it?? If yes, how??
nacim

Yes, go to Options, and uncheck the adress verification.
fdg1997

I can't find "adress verification"... on the LFSLazy window Options (Under "Other" tab) and neighter ongame LFSLazy Options
nacim 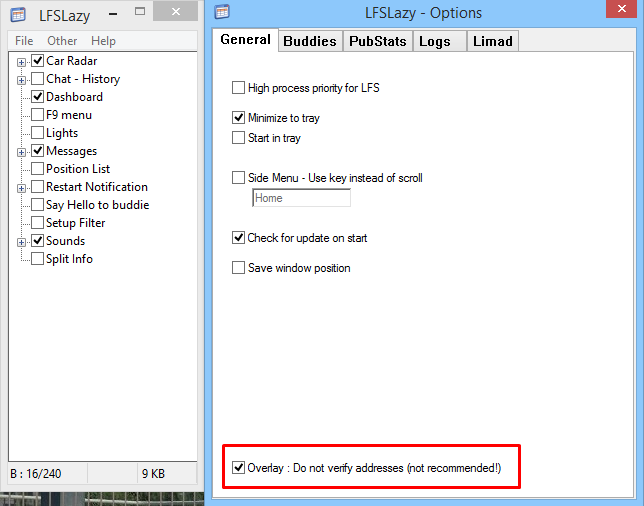 I downloaded the first page DOWNLOAD, it says that i need to extract but the download is a .exe file... is it right?
vitaly_m

Further request: is it possible to have the server bookmarks? Also ability to remember the tab on the main menu widget. So when you open LFS you see the bookmarked servers and then connect it right a way.

And one more question. Is there any ways to contribute or maybe even source opening?

Thanks anyway, keep it up.
DANIEL-CRO

nacim has little newer version which has that feature (looking at change log). I plan to release new version in next few days, but still waiting for some responses.


Thanks! There is still room for an improvement, for example what bugs me the most is where there is approximately half lap difference between cars its "unstable" (switching before/after). Sorting is done by nodes in MCI, that alone wasn't that precise so I had to make it a bit more intelligent by recording and comparing info with the exact timestamp for every car on track.


Flame CZE requested some time ago "Favourite servers", and I've done that recently. Preview in attachment.
Ability to rememeber tab, does that reffer to buddies/servers/replays in entry menu?


LFSLazy isn't a small project, right now it has more than 700KB of code all written by myself. It is written in C, with a tiny bit of classes (so called "objective C") where it actually make sense (memory/performance wise). So far when I shared bits of code, well ... I'd say it wasn't understood well. If you would like some changes feel free to suggest here/pm, I'd say I'm relatively fast at implementing nice suggestions so that shouldn't be a problem. Ways to contribute at the moment is probably creating dashboard textures

Latest version can autoinstall textures in case there aren't for specific car. That should make whole process much easier I believe.
nacim

Oh, I thought it was already on the lastest available version. ^^'
vitaly_m

Yes, you get it right

Thanks for all the answers I will look into those gadgets stuff...
Litro

I dunno why but XFG total distance odometer fails at some point.
DANIEL-CRO

UINT overflow. Fixed in my version

About "/o dash". Is it (or will it be) possible to switch background picture depending on RPM? So that we can make something different for formula cars?

Or maybe there is other way to implement custom indicators?
DANIEL-CRO

I didn't look much into forumula cars for now. I do not see the reason to change complete background texture at different rpms, however what could be done is like LEDs which light up as rpm rises or linear gauge if you understand what I mean.
vitaly_m