It was realy nice to compete in this competition. Keep up the good work and let's see what the next season brings

Thanks for the feedback. Due an idea I got, more detailed information wont come today, be patient!
UnknownMaster21

I will finish Season 1 completely tomorrow, with news and other things added. Then we can say: till next time!
UnknownMaster21 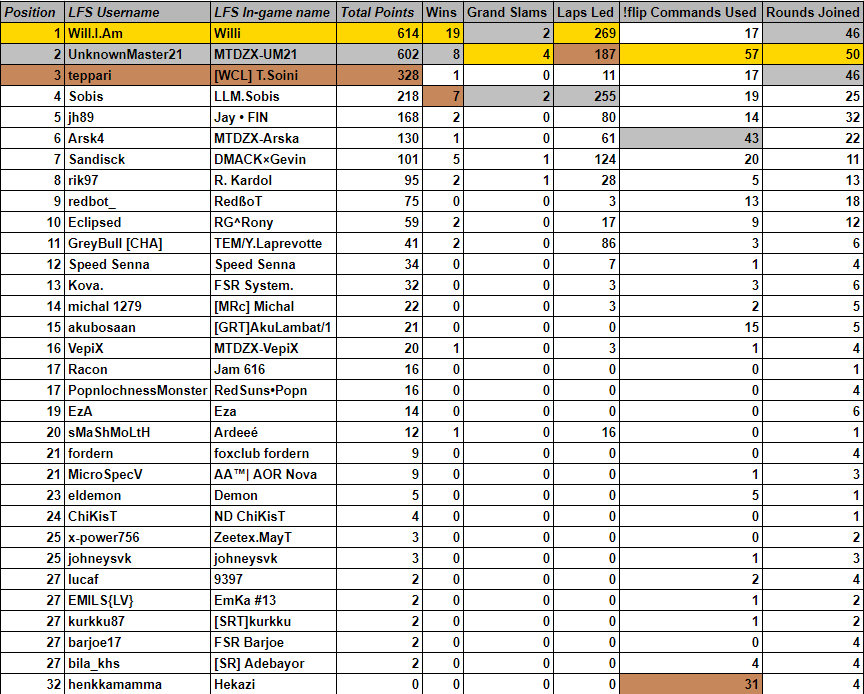 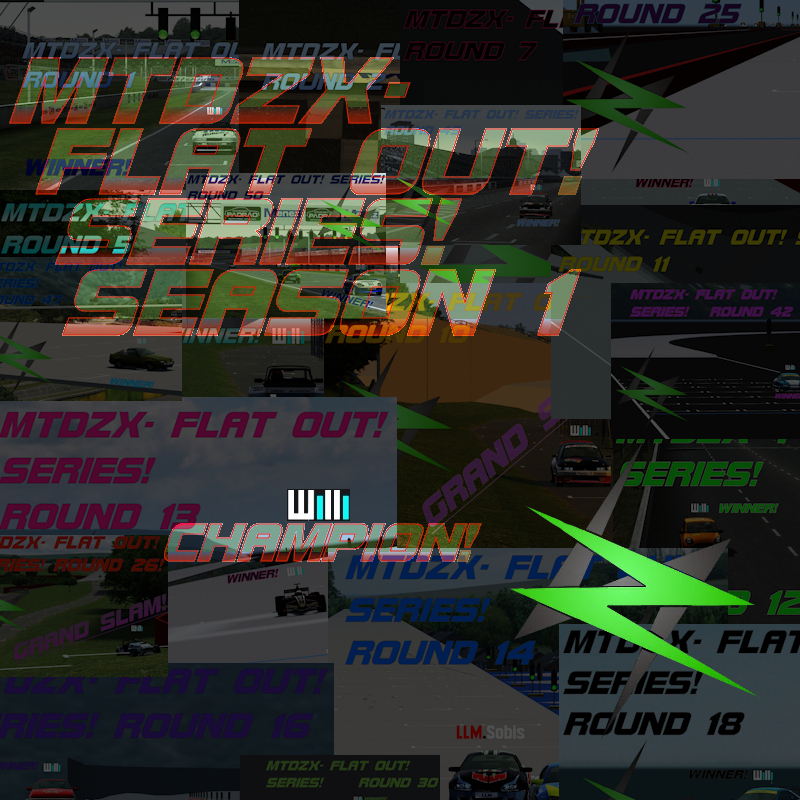 51 Rounds are finally completed! First round were held at January, where six racers did participate. In there, Willi ( LFSW: Will.I.Am ) THE Champion took first round victory. He continued to win Round 2 and showed what he is made of. Ultimately he claimed astounding amount of round victories: 19 and led most laps in total in 51 Rounds. 8 points is the final gap between Willi, and his contender, UM21.

Congratulations Mr. Flat Out! We'll see you in Season 2, in next year! Willi gains TWO S3-vouchers, as he won 2nd S3 by allotment, which was unfortunately not "putted" to be as public.

( UM21 attempted to record how it did happen, but ultimately recorder did not for some reason run and actually record, and doing re-roll would mess the official allotment. Sorry about that. Only three flat outers could only plausible get one, as Willi, T. Soini and Sobis were the only ones who managed to get more than 200 points and participate 25 or more rounds. The thing was done with dice, that same glass dice as done on last year's MTDZX- 10 year superrrrrrrrrrr special event!

Numbers were drawn by their position in final standings and divided to equally:

This unusual moment happened by VepiX ( LFSW: VepiX ), who missed the racing line pretty early on last corner and is hitting to ARMCO guard rails. There is lamp post and two start lights on that corner, sitting outside of corner. The common thing is that car is not supposed to even go through between post and guard rail, but somehow VepiX managed to do so and ultimately got stuck! Even !flip command could not save him and so he was facing a retirement!

This round was held on Disc of Mayhem II a - layout. A disc known to catch ultimate speeds by doing glitch drafting, where cars are above each other, gaining draft constantly and multiplying the amount of plausible draft in percent by having more cars on top each other. Although the layout contains 90 degree banking, which is technically a wall, cars are still on top each other and so the mentioned draft starts to be on existence! Everyone were going more or less faster, but the more cars going on pack, the greater speed it will give! In this moment, a virtual SIX-car wide appears, where everyone is driving on their own line. Although this moment didn't happened on literally, where all 6 cars are lined up, the overtake must have been amazing feel, even Jay from Finland must have thought so as well!

Maybe not so spectacular moment, but it gains to be listed in as number 8, because driving between and actually avoiding concrete pillars was something unique, yet almost never seen before! With strong wind and more than 300 pillars in total, did even made Formula BMW FB02 car to be dangerous feeling! It was also praised to be nice layout, as 2 hard corners did require braking, sometimes braking were required while racing against others between pillars!

This is what Flat Out! originally tried to show for you about what is racing in high speeds. Some nice battle between R. Kardol ( LFSW: Rik97 ), UM21 ( LFSW: UnknownMaster21 ) and Willi ( LFSW: Will.I.Am ). No bumpdrafting, just old school drafting with gentleman rules! It was indeed enjoyable moment, or what you say Rik? For Willi it definitely was, despite he almost ruined his race at that spot at near end of this clip!

Yeah, try to reproduce this little trick during race, with ONE attempt only, see what happens. I dare you! What if you, Arska ( LFSW: Arsk4 ), someday spending 2€ to the Euro Jackpot? Maybe in that day when that happened, all planets and moons were in optimal position in our solar system! Or, maybe you were absolutely tremendously lucky at that one! car is even Front wheel drive with slicks. Yes, he hits guard rail, but he is supposed to crash and fly away from the track. Nope, he survived and that's why it deserves to be on #6!

If you know real life game called Curling, and have even actually played, then you know how hard game that is. Sure, in this clip there is red concrete wall to prevent dropping to the void, but still this amusing and unusual crash, while having two cars sliding on their roofs, hitting to each other, isn't that just fancy curling moment?

This is ranked to be on number four, because at back then, racing on these kind of layouts were pretty new, and did contain several inexperienced racers. There could have been easily FOUR retirements in one crash, but amazingly, everyone survived!

In this race, Jay from Finland ( LFSW: jh89 ) had car in better condition than UM21 had and odds were greatly on his side! Offense vs Defense. UM21's suspension damage was so high he could not go virtually any faster and therefore Jay was catching him... unless unexpected and dramatic moment happens!

Man, this start was pretty crazy and involved three racers to have some crash out there before finish line is reached at rolling start. Very tense moment indeed!

Let this clip talk for me. Simply look at it! Ultimately Sobis received 10 second penalty on first laps by causing a crash, so ultimately it was Gevin ( LFSW: Sandicsk ) who won this round! Double Drama!

Yes, UM21 had some secret investigation about, is there REALLY anyone who actually cares and analyze the race reports, announcements and replays in MTDZX- Flat Out! Series! ?

Well... not really, although one secret was found ( probably easiest one ).

Here is all secrets!

Number 1: Round 23 Race report and replay:

In here, there was claimed UM21 ran out of fuel just before finishing last lap. This is not true, there was still 1.8% litres remaining. If zero would have reached, the car would have bouncing, glitching and offsetting at replay, but in here, it is just stable as it would normally. No one revealed this by giving a reply on forums or even PM'ed to me.

This is kinda continued section to number 1, where indeed UM21 ran out of fuel in this part. This was supposed to be as a hint to the number 1, but no one found out this one, similar to number 1!

If you compare the Round 42 round announcement attached layout and Round 42 race replay, you'll see there is last straight modified a little. In race, there was actually increased amount of concrete section, as BF1 was unable to go full lap without damaging the suspension all the red. So, the secret change was made and more concrete was added slightly.

Dropper Function layout contains original Westhill pitlane, which has original pitboxes. During races and qualifies, if no custom pitboxes are added and no modified default LFS race rules at all and having original pitlane, it ALWAYS has pitspeed limit, if it originally exists!

In here, this was kinda last hurrah of hoping someone finds it. YES, Eclipsed and jh89 found it!

This is it folks! Thank you for all people who joined to races and gave a try! Let's make Season 2 to be even more better than this one, and let's see if we can attract more racers on here! Thank you for all! It was enjoyable to do this. More info will come on next year, with all new rules and more simple things! Stay tuned!

Good stuff, thanks for the races and the reviews

Nice report! I still feel a bit bummed by that round 39 finish, where I didn't keep a safe distance and Yann spun mostly because of my lag :/.
redbot_

Thanks for the great season. Really enjoyed the races, despite being so slow

Hey, it was last corner last lap... You had to have a go

Good season report! Thanks for the epic races all.

And by the way, thanks for reminding me about that failed hunt of mine

When will the server open?
lucaf

oh yeah... original plan for Season 2 is starting at February but due some not-so-good things occurred, I refuse to give any info right now.

Besides, give me 2 weeks and then we are back to looking things on here and there.
UnknownMaster21

Welcome to the speed! 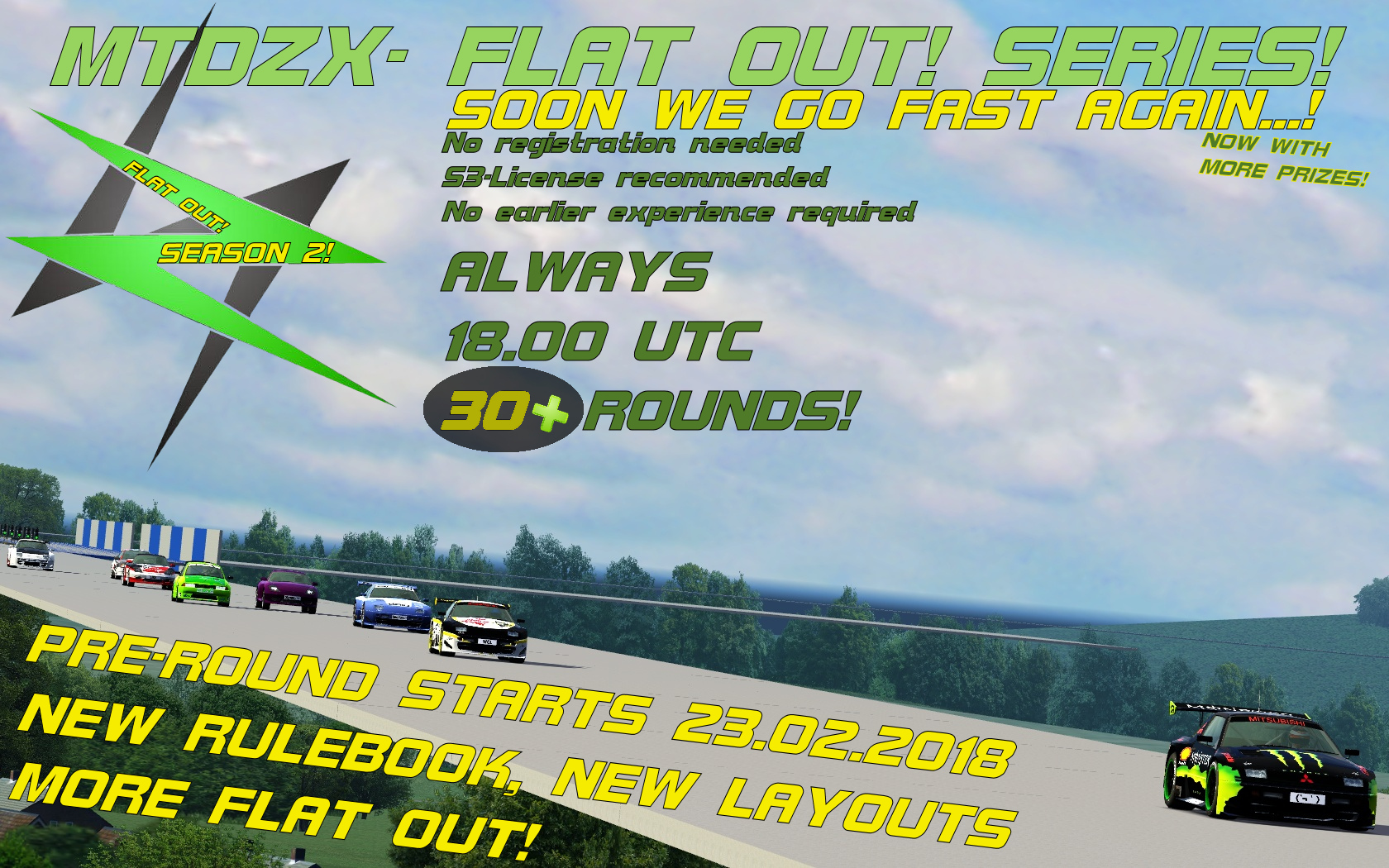 
EDIT: Any questions which pops out, shout it!

EDIT: Any questions which pops out, shout it!

So, did i understand it right... you can not have a broken suspension or flat tyre at the finish line, at the end of race? If you dont want any plausible penaltyes

Yes. This prevents ppl using too much walls or going too fast, or if dropped off the path and used !flip command and damage too high.

Unless combo is xtreme , it wont change much things, if at all.
UnknownMaster21

Reminder: thuis had always supposed to be hard-core. Thats why certain aspects

Alright! Pre-Round 0 will be set soon, with selected code seed number from Jay from Finland, and it is : 31118.

It will be revealed once I have slept enough well. Nap time! --->
Sobis

I want to add - so clutch mustn't be 100% overheated (full bar) or it mustn't be red (~15% of the bar)? Red clutch is by no mean overheated if it has just gotten red - it might not clamp as aggressive but it won't randomly start slipping...

Ahhhh! Good thinking! That is indeed like you said due cars acting differently. I quickly edit that rule, and so be it 1/2 for two reasons:

Everyone must have to keep in mind that no pitstop repairs the clutch overheat!
lucaf

Even the most overheated clutch gets cooled/repaired by itself if you have just patience to wait. If you do that waiting in the pitslot, you can imagine how your pitcrew works on it