Car and Layout is now on, also server is passworded
UnknownMaster21

Let's see if we manage to get over 9 racers to this one! 40 minutes before qualification starts
UnknownMaster21 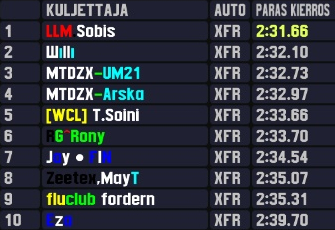 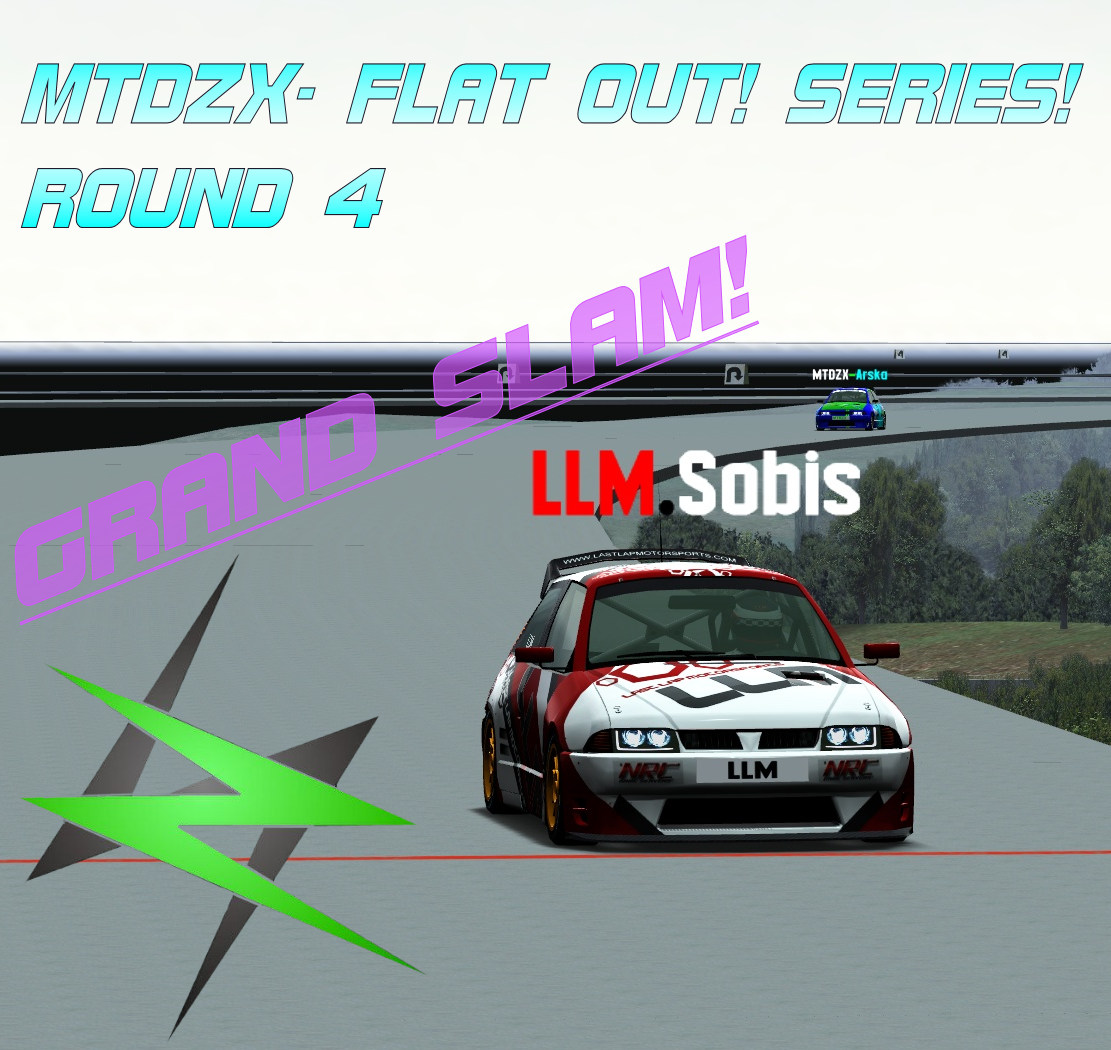 Round 4 is done and did feature multiple times of entertaining issues. Turn 1 was amazing to see no one did fail on there, even close calls did happen! from 10 qualifiers, 9 started, 6 finished, but only 1 can be winner!

2nd position goes to MTDZX-Arska, and 3rd position takes Rony from Race Green Autosports. Fourth place is earned by T. Soini and 5th place takes Willi, who got dropped in lap 1, managed to keep the pace to finish line, unlike some other people, which will be shown on highlights. Here is some highlights. 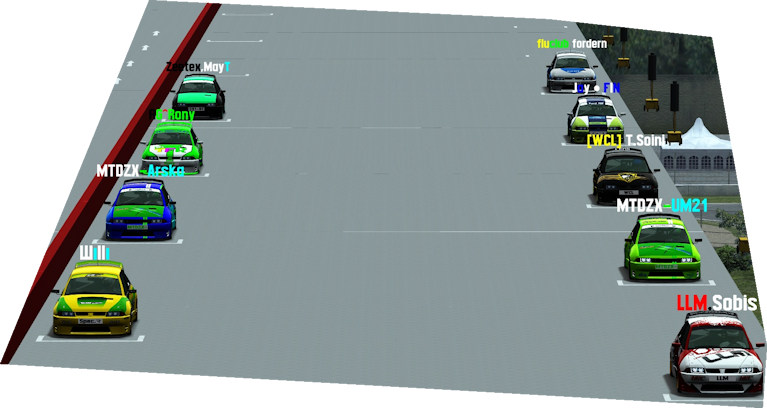 Turn 1.. Jay from Finland (jh89) made excellent cornering and managed to take multiple positions. Amazingly no one did crash, although Rony had minor incident with MayT, which caused MayT to go on 2wheels for a moment due the contact. It was MayT's fault, but no penalties given, only finger pointings towards to him.


Fatal four-wide, contacts did happen, but everyone survived!

Willi drops by driving mistake! he luckily drops to the void and gets no collision to any path! he managed to get back to the track by doing !flip command under the layout, which teleports ALWAYS to the highest point! Knowledge is power, and completely legal!


MayT did survive lap 1... almost, too much throttle on slippery concrete slabs and too much on the edge causes this, game's over!


Back to turn 1, moment when Rony overtakes fordern 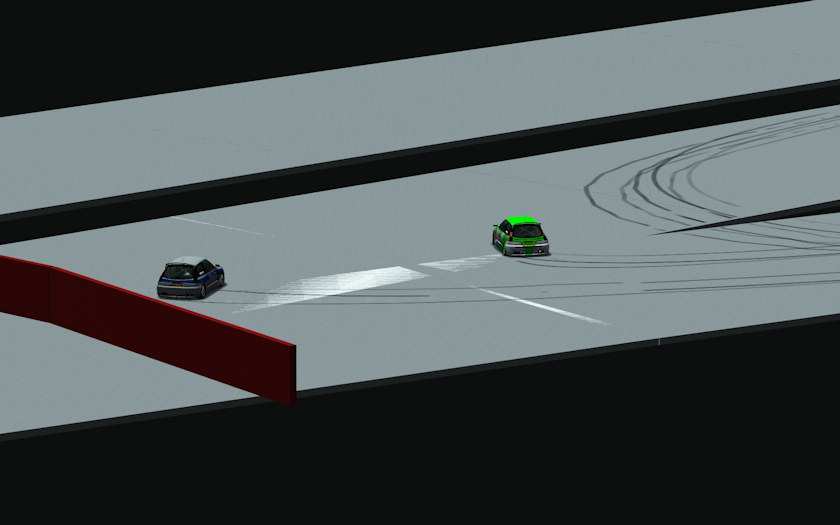 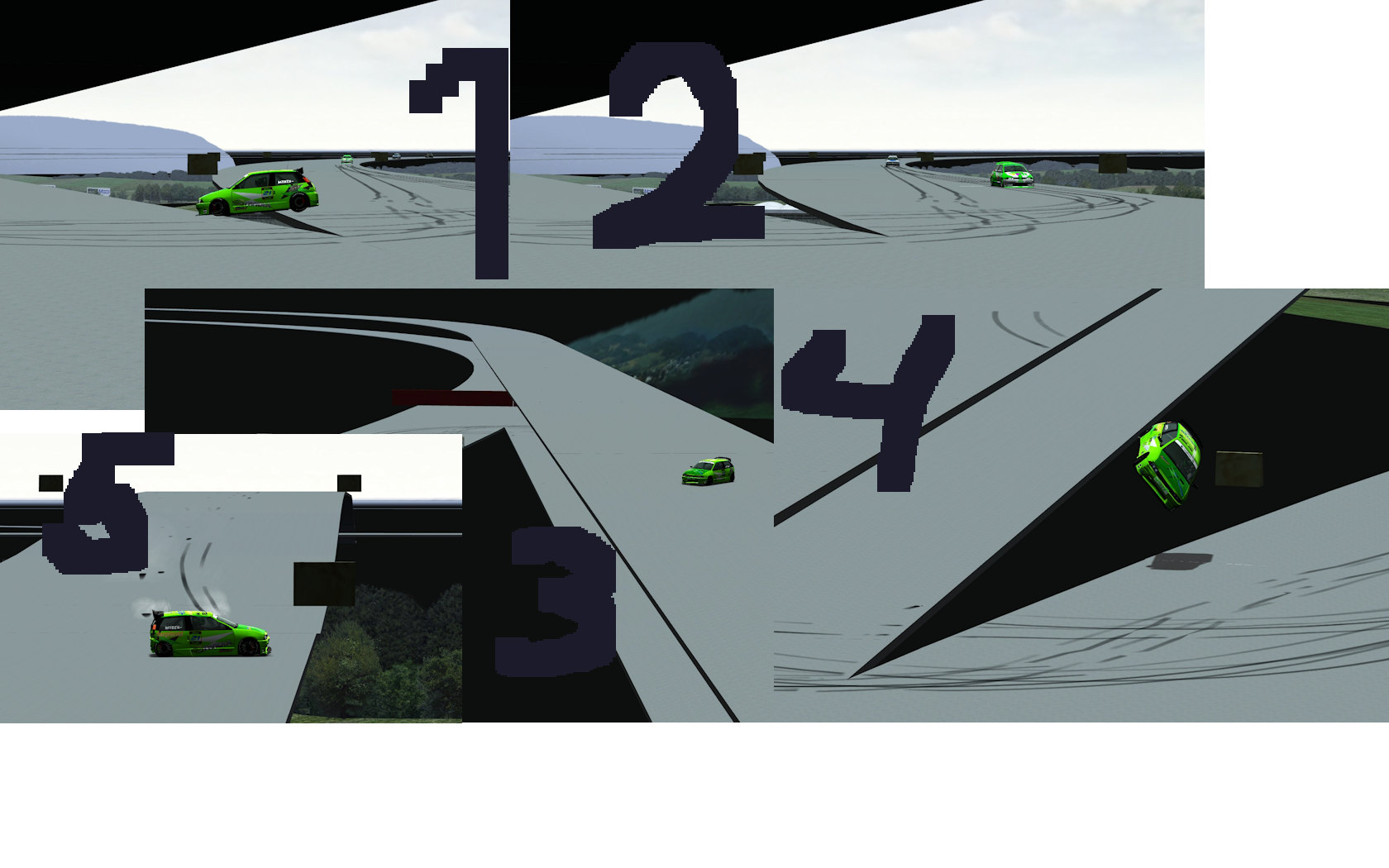 "Better be in track than in void!" fordern and T. Soini had some little meeting on last corner. Gently fordern lets Soini to overtake after he made his rally entry bit too far! No matter how it was, respect shines for non-contact overtake!


Look what the bose dragged in! What if you sometime join for the actual race, dear coder?


And finally it was fordern's turn... fordern's comment after this indicent: "today's lesson: try to open your cookies BEFORE the race" Cake is lie my friend... better luck next time! 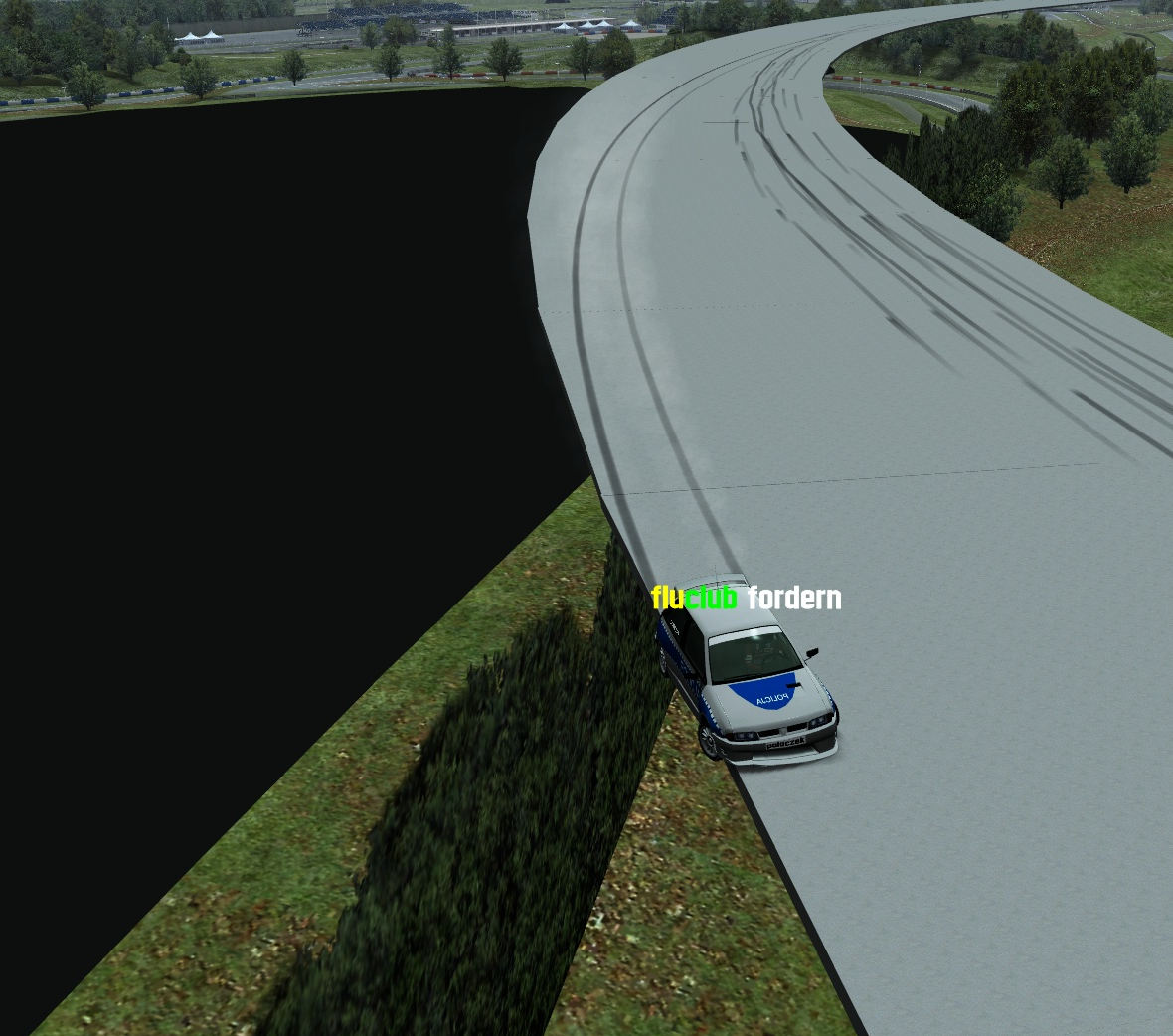 Most qualifiers joined: 10
Willi and UM21 were the only guys using !flip command, both twice ( though Willi used once only, or did he? )
MayT did join back on the track because /midrace no command was not activated. It would had cause automatic DQ, but because he ultimately failed on track, it was settled up.
This was shortest race from what we have done.
UM21 did have a pitstop, no mandatory pitstop was required.
There were several complaiments about hairpins.
Some racers had cookies before race and during race ( well, at least attempted )
People in TeamSpeak did enjoy "SNIGURR" (Snickers)
First time results are published before statistics updated!

Stay tuned for Round 5, which will be on tuesday, on 16.00 UTC! It will be slightly different compared to earlier races! Thank you for all participants! See you next time!

Actually i broke my suspension (that was the moment when i was opening those damn cookies), and thats why later I made a slide when Soini passed me, and later gone too far on that corner.

You warned me, that this layout is difficult. I didnt see any difficulties until that moment.

I did not notice about where, that means I missed something

. But that slide was however, the ultimate end

That happend just lap earlier, on the same lap i made that corner quite well, so i was confident that i'll do that again on the next lap. Well, the result is on the last screen

How about this one? 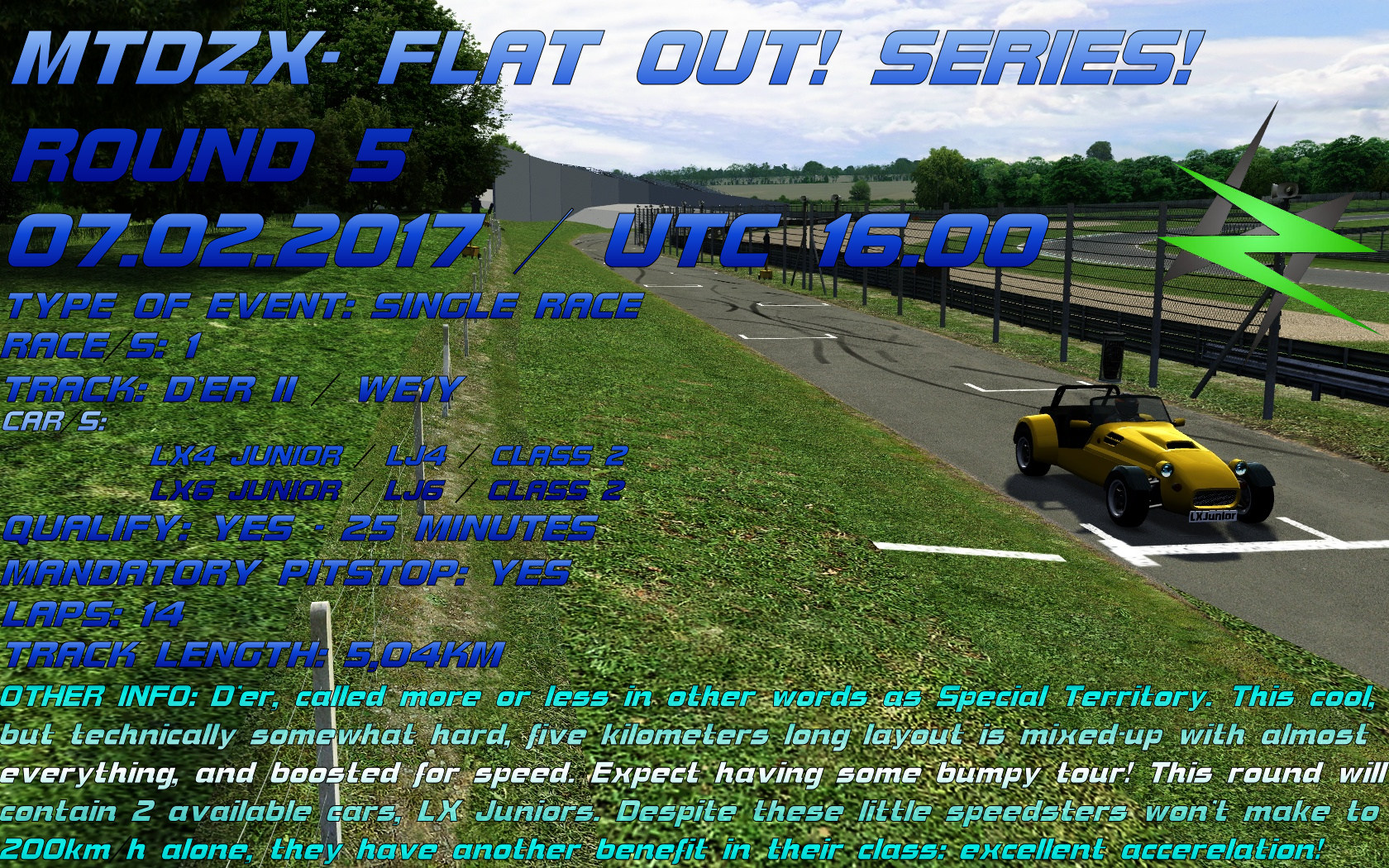 Due the implements on the code, for the next round there is no need anymore passwords

EDIT: however, what if some people joins and starts chatting/asking? any discussions about it?

EDIT: There is still password required, but not on qualification and or before that
Last edited by UnknownMaster21, Sat, 4 Feb 2017 12:13.
jh89

Maybe it should be passworded during the race. Before and in qualification no need.. so there wont be any pointless chatters in race


Updating stuff on for server itself
johneysvk

UM21, that combination of text and green background is almost unreadable

Ahhh, it is good to read if you check it on mobile, with small screen. I guess if you have LCD screen from not-so-new, and the angle you have towards the screen you see, it makes things look completely different. Reflections and other things, try to look it completely horizontally even and you see, it is possible to read


EDIT: but yeah, it feels stupid, I pick next time better color to make it read, or simply background from other way, either way

actually i was checking on my phone hehe.

i mean you can read it, but it takes a bit of effort

hm, I have no idea then

That layout was just awesome and so creative, around Westhill.. really enjoyable and perfect cars. I wish I had seen more racers in that one, was really cool countryside speeding.
UnknownMaster21 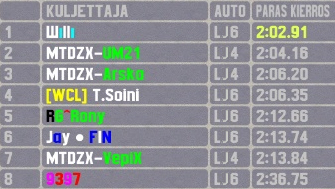 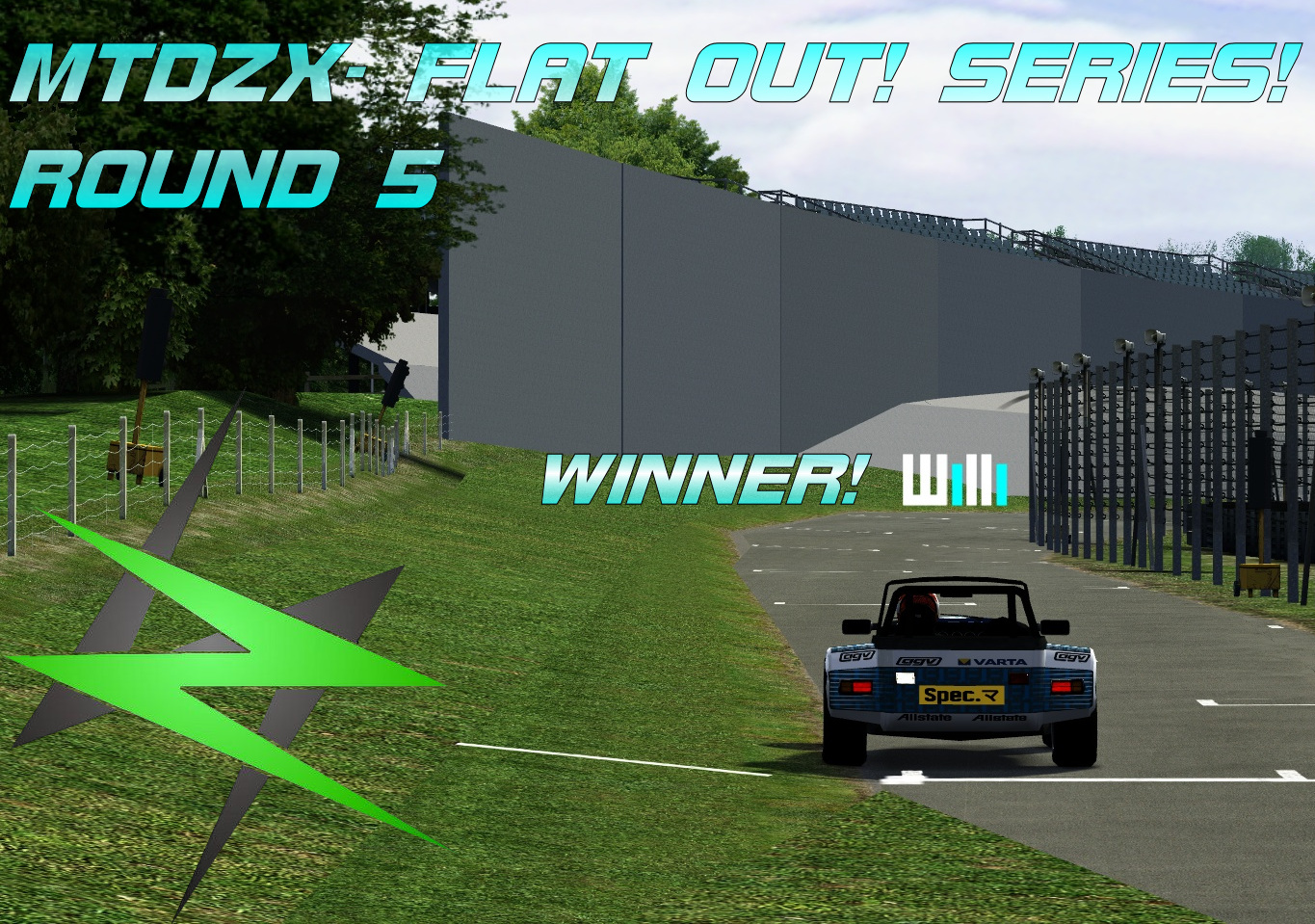 Mr. Flat Out! Managed to being victorious since Round 2. Although not unbeatable, but sovereign performance kept him to keep fast pace in overall for 14 laps. His pitstop was also short compared to others. He managed to have pole position, he managed to lead every lap from start to win... BUT he could NOT take the fastest lap with LX6 Junior car, as that took UM21 with LX4 Junior.

5th place is taken by Jay ( jh89 ), who finally managed to finish the race after two earlier attempts ended to retirement before finish lane! He takes 4 series points.

We had 6th finisher: RG^Rony. Although his race was absolutely difficult, it was no problem to him to actually finish a race. Finish is a finish!

Race was somewhat indeed hard and did include several cool highlights! here is some 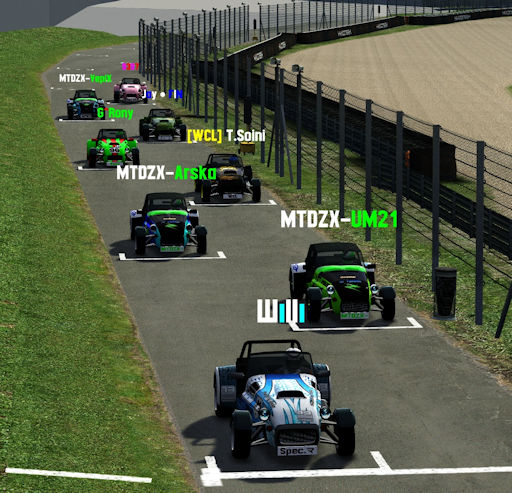 Aaannd we had a crash before T1 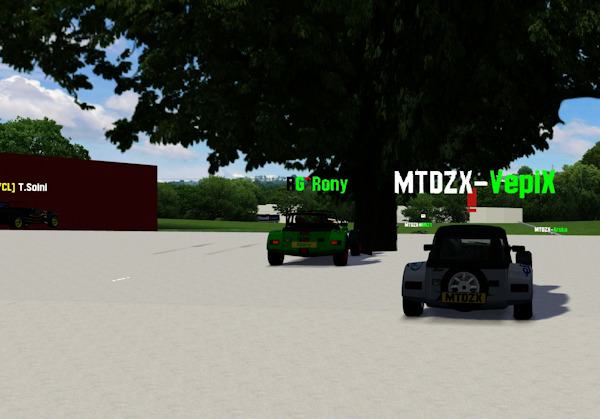 And if in some case Rony, you suspect your feelings about hugging trees or not, you should be grateful to 9397 ( Lucaf ), who managed to make another "backslammer" due the Rony's unpredictable crash towards to trees. I'm sure Lucaf is able to persuade you Rony to join our treehuggers club ( it's green too <3 ) 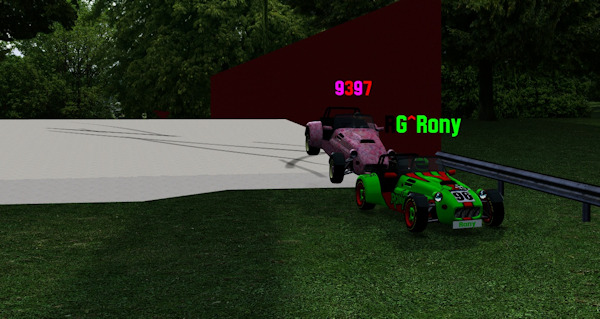 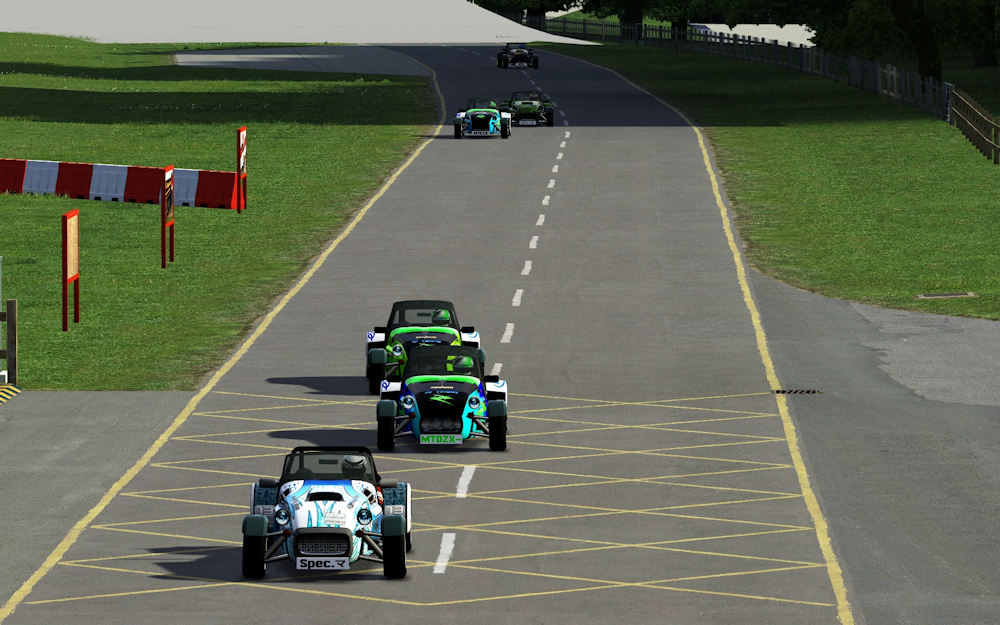 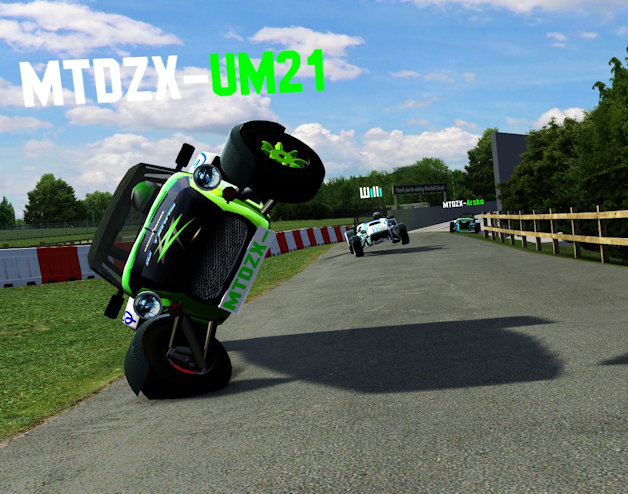 "nub" ( Willi's getting another hit to poles, had earlier one minor ) 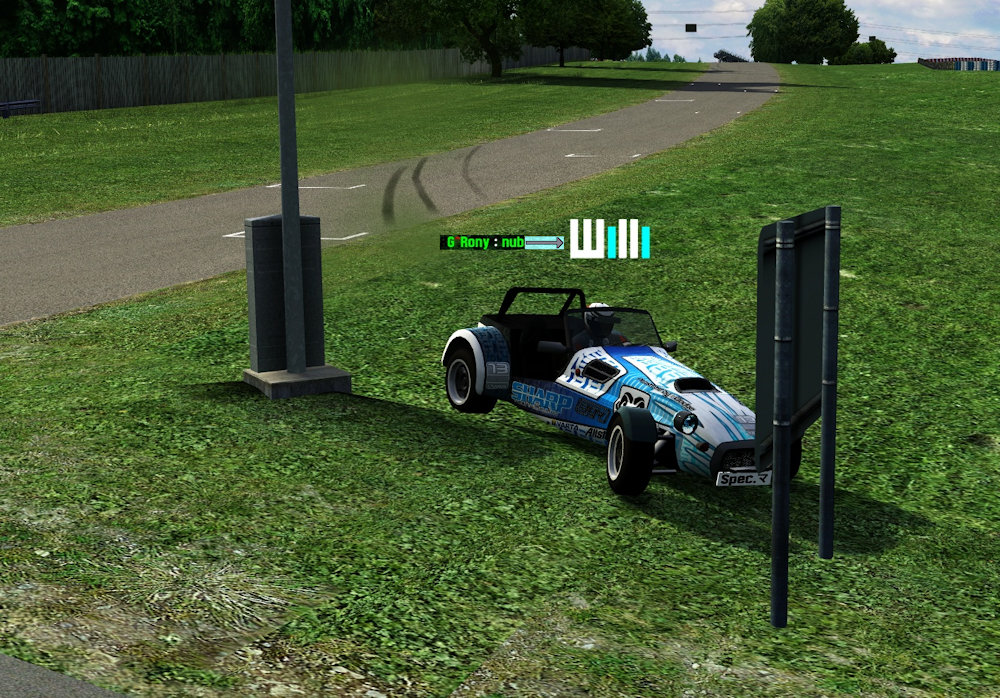 Guess the place and situation what happened! 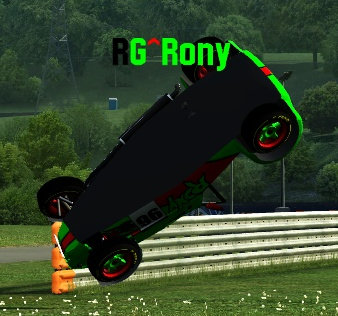 VepiX, first time joined for qualify and race, and first time someone have got stuck so badly, even !flip command did not help at all! 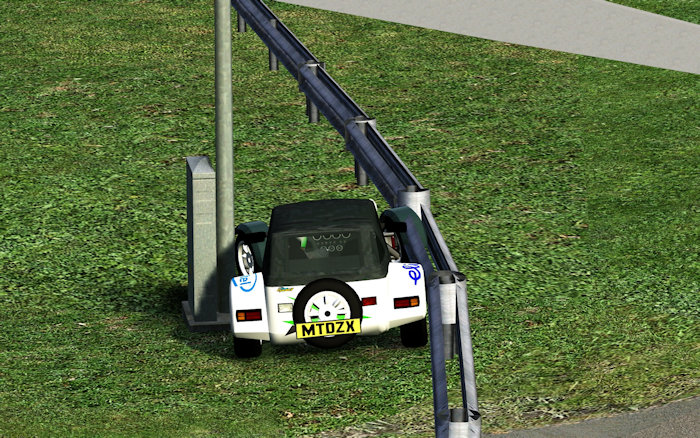 In final laps, this was moment when UM21 landed to ground, rear suspension is gone! And Arska escapes! 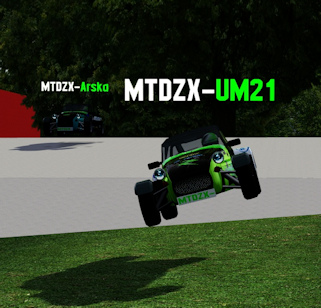 Willi is the first guy leading all the laps on race without getting Grand Slam!
Many racers had to use !flip command
Jay finally finished!
First time victory line is crossed while going reverse by winner!
VepiX was the first guy getting stuck so badly even !flip command did not help at all!
There were first time a crash before Turn 1! ( treehuggers rules, Rony! )
Race time for winner in Round 5 was 0,06 seconds longer than in Round 2.
UM21 had problems on focusing, especially phone.
Despite having DNF for Lucaf, he clearly stated multiple times for having this layout being his very favourite one!
2/8 retired
2nd time we saw signature movement "Comet 9397", in alternatively as Lucaf's Backslammer. The ironic thing is that Lucaf is completely victim!

Points standings in the series: Willi is on lead with 45 points. Arska is 6 points behind of Willi, UM21 is 2 points behind of Arska. T. Soini on 4th position with 26 points. Sobis, the grand slam guy, is 5th on 23 points. Rony from Race Green Autosports ( Eclipsed ) is 6th, only 8 points behind of Sobis. Rest of ppl has 2-9 points.

Thank you for all participants! We did show once again that racing in these series is fun! Let's hope to get some new guys involved here.

Next messages if for dudes from [TC] Cruise and B2R! Racing servers! To obtain more speed, you must go faster! Achieve some speed on Round 6!
Last edited by UnknownMaster21, Tue, 7 Feb 2017 20:24.
VepiX

I knew when i was starting my last lap that i would broke my suspension in this lap.. and i did 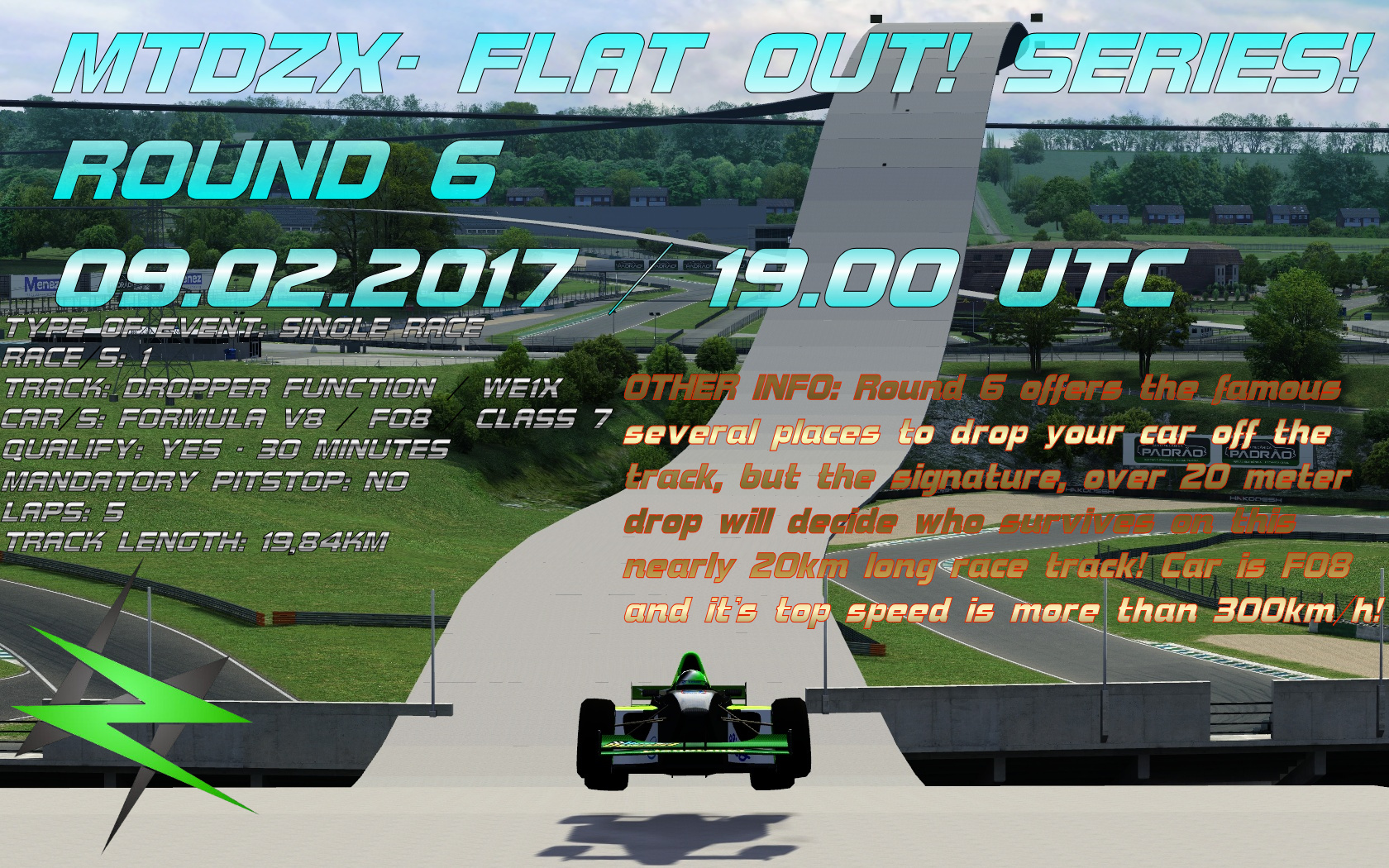 Hell yeah, formula race at the time that is possible for me

as 30 minutes to go before qualify starts, 6 people are held in server, 4 more pl0x! actually 5

Found very interesting technical detail (or even bug?) in the replay of tuesday's race; UM21 right rear suspension gets 100% damaged (color=red) on top of the bridge during LAP6, but after a little while, the colour went back to orange(! + the behaviour of the car got better) , and then after a short while, damaged back to red. How you explain this? Should be reported to devs?
UnknownMaster21