Because, for example in last Tuesday's combo, it was possible to gain over 0.1s per lap by using it. One tenth is a lot in a track with only two turns.

Most people want to use auto clutch for some reason. I don't know, maybe it's because it is a little bit easier to use or maybe some people don't have a good button on their wheel for it. Also, newcomers probably don't even know that bc is faster. So bc makes difference between inexperienced and experienced drivers even bigger and races become less interesting.

That's why using auto clutch has become kind of fair play rule among LFS drivers (that I know). There was discussion on this topic also on Cityliga forums some time ago. There admins eventually decided to disallow bc.

Yes I know this is just a fun racing league, but it isn't any fun that some people decide to use bc while majority sticks with auto clutch. Let's keep it fun for everyone

it was first and last time I used it, just tried it for fun (online)... Only lately Ive been using it on hotlaps, but online that was first finished race with BC and as I said, also last one.

Anyways, I support disabling BC on any racing event, would be just fair against every participant, just like Botsi explained
mbutcher

Auto clutch has always been a sort of gentleman's agreement in LFS. There are 2 sides to every argument but when it has a very clear advantage, even in a car with only 4 gears and a track with only 2 real corners, it should either be recommended or disallowed. So long as everyone knows what the accepted clutch method is, there can be no argument.

I'm firmly in the AC camp because BC feels unrealistic and cheaty.
UnknownMaster21

Hm, honestly, I do not care if everyone uses button clutch. Being on hotlap, league race or just fun.


It sounds odd when you say like that
k_badam

It is unrealistic, it is binary, it is on and off and a real clutch pedal isn't.
Jatimc

technically not cheat but... just like butin 220 degree on xrt, fz5 etc. simulation is war away from that. users who do dis should ban 999 and revoken them licene
Mikus1212

Ok, I will keep using it anyway.
UnknownMaster21

Yeah, that's why we need a rule. There is always someone who wants to take an advantage, even though most of the drivers would decide something else. As Pete said, BC should either be recommended or disallowed. Personally, both are fine for me. But as long as majority want to use auto clutch, it would be easier just to disallow BC. Also, if over half of the grid used AC, I would feel quite "dirty" to use BC even if it was recommended.
Mikus1212

Disallow bc, force cockpit view, hardtrack setup for everyone

This doesn't really make sense though. Only one of these is something that the devs didn't intend on happening. You're making the game work in a way that it wasn't intended to do in order to gain an advantage over those who either don't know, or feel that its "wrong" to do so.

Why do you feel the need to use it anyway? You're blazing fast without it (in the cars I've seen you in).
fordern

Yes, but button clutching is a well known fun remover, any time it comes up.
GreyBull [CHA]

Just to know - I dont use it because it gives me advantage, dont really care about it. I just want to use manual clutch and thats the only way for me, Im mouse user.
Ziomek21

Then set your button control rate to 2.00 if the realism is what you're after.

(it is probably a bit overboard, but it will help you to see the picture why it is a) unrealistic and b) advantageous. A value around 5.00 would probably be closer to what's possible to do with one's feet on the pedals) 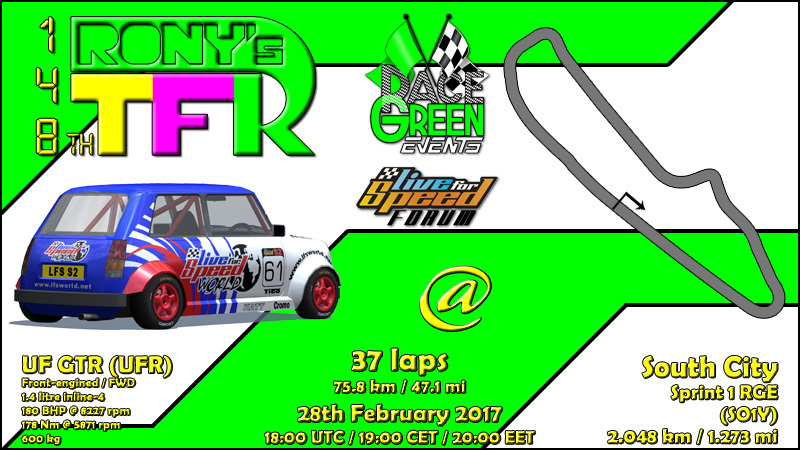 
PS. Following the discussion here any few times in server,it has been decided to disallow button clutch via Airio settings. This means you have to use "auto clutch" option in options-driver menu. Of course drivers,who use pedal (axis) clutch can still use manual clutch,also this means you can still engage/disengage clutch via button (for example in start).
Eclipsed 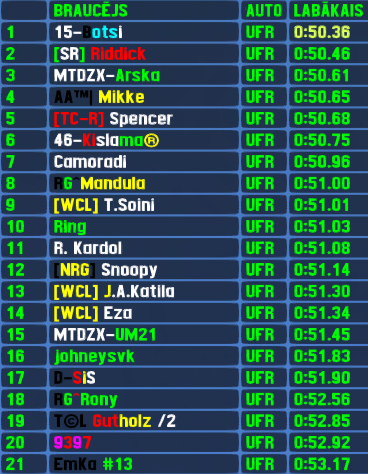 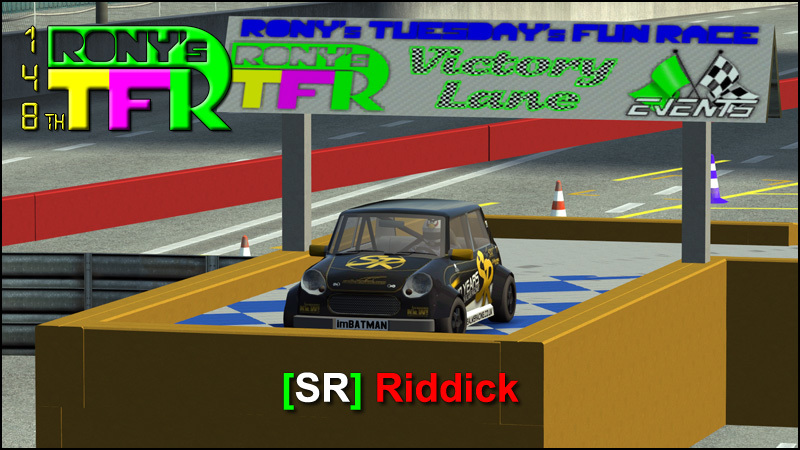 2 RTFR races in row with same car,well,almost - yesterday we used the small UF1000 on steroids,and it was really angry - it ate tyres,clutches and few drivers' patience. Already before qualifying there was fight for fastest lap between Botsi and Riddick,it did not stop until late qualifying phase,where Botsi managed to set laptime noone else could beat and he took his 5th ever pole position. Unfortunatelly the front spot advantage was lost in turn one,later also clutch heat took over and Botsi retired. But northern Europe still celebrated victory - if not with finn,then with swede. Riddick slipped by polesitter in turn one and never gave up the lead during all 37 laps,taking his 1st RTFR win in his 15th started race,adding also 7th top5 finish to his stats. Ridick is now the 56th member of RTFR winners club,2nd new addition in this year. But there was someone who was faster yesterday - starting from 7th position,Camoradi had to overtake few before being able to unleash the full power of UFR,setting also fastest lap of the race (his 2nd),but only 2nd position at the end,6th top5 finish for the croatian,while Arska was the only one in top5,who finished in same position he started - 3rd,which is his 3rd top5 finish. Spencer finished fourth collecting another top5 finish into his stats - 19th,UM21 was 5th with 9th top5 finish. Interestingly the winner was the only top5 finisher without previous win.

After usual 2 weeks break RTFR will return with street legal cars race,before that there is still one more chance to jump in AWS action before sign ups gets closed - the AWS "crazy" classic is next round,using FXR in the Blackwood rallycross track!
Eclipsed 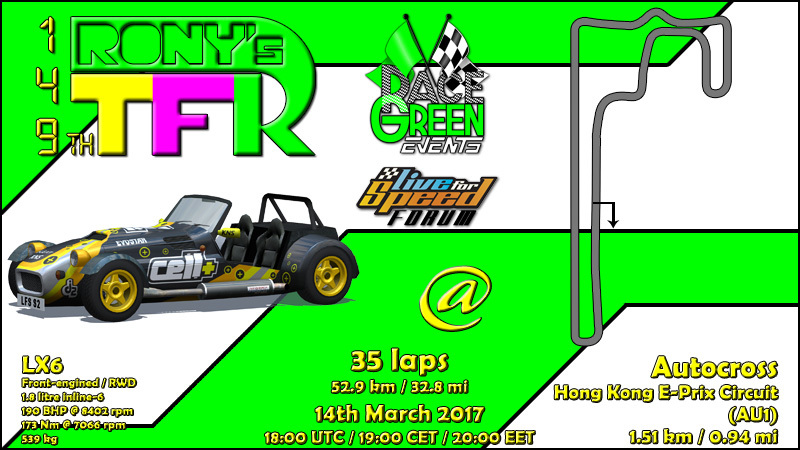 Server is up and running: Ronys Tuesdays Fun Race (feel free to spam the Airio top table with your laptimes)
Kid222

Well that was half really fun and half an absolute wreckfest :|

I agree with J@tko. After I had a quick look at the replay, his reaction to the rough battling was insane. If I remember correctly, this wasn't the first time we experienced such a behaviour, although not as bad as today.

Riddick, he didn't ruin YOUR race. It was OUR race. You're not alone here.

All in all, I enjoyed the race even though I got spun in T1 and had to chase after the field. Sorry to kid for my silly attempt to turn.
Jonathon.provost

Thanks to Rony for organizing. First time at one of your fun races. Unfortunately ruined by an arse! But I will defiantly be back, thanks!
UnknownMaster21

hmh? I shoulda had watch the race, maybe even race, but impossible ( atm )
Oliver Feistkorn