Looks like your kinda late, the race started already before you posted.
Muhi_GP

1. lap Mikali crash me.
8. lap Snelle Eddy crash me.
worst race in which i participated.too much crashes.
N I K I

I propose a race ban for Kars... not only that he braked 50m too late, but he targeted my car. Clear wreck on purpose.

Even though i wasn't there at all.
VTiRacing

Another cruise because someone took off Niki.

It was not on purpose, I am still learning how to drive with steering wheel, my second race with 720* + manual clutch + h shifter, and I am struggling with heel & toe, that's my excuse for that terrible braking

Lap 1 - you and Mikali drive side by side,slight contact and unfortunate lag sends both to different directions,can't see anyone to blame here,racing incident.
Lap 7/8 - after you made a mistake in long lefthander before going under bridge,Snelle Eddy tries to pass on left side,you block off,him,both still exchange contacts until start/finish straight,where Snelle Eddy attempts to pass on right side,you block him off again,I can't see a reason to blame only Eddy,as you initiated twice the contact! In this case WARNING for both drivers (SERT•Muhi and Snelle Eddy) for avoidable contacts and suggestion to race cleaner in future!


As far as I know Kars,he would never make any wrecking on purpose,but it's the 2nd race in row,when Kars misjudges situations causing multiple car incidents. Kars receives 30 second after finish penalty for causing avoidable incident and suggestion to be more careful if you're not 100% sure about you ability! 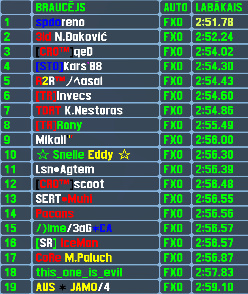 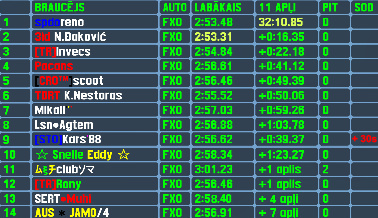 Statistics / Event rating and other statistics (will be updated tomorrow)

As you can read from posts above,the 2nd year of the event started quite...umm...bad. There was a multiple car incident at the hairpin before secondary start/finish straight,started by huge mistake of Kars,who misbraked and hit N.Ðaković,but the mess just started with it,as more cars got involved in this. Reno profited from this and had a chance to pull away cleanely on the way to score the record setting 3rd win in row to become the winningest driver of RTFRi with 5 wins! In qualifying with his final lap he denied Niki his chance to score 3 pole positions in row by taking the pole for himself with an impressive laptime which was just 0.04 shy of the World record. Niki rescued at least 2nd place after fighting through almost half field,setting also fastest lap time of the race (his 3rd),but Invecs finished with a solid 3rd place to score his 7th top5 finish.

Let's hope the number 29 brings us a cleaner race,as we will race with more gripier cars after 2 weeks!


Edit: Event rating and other statistics updated! 3id N.Ðaković takes lead in rating after just 4 race attendances,but in all of them he scored at least 12 points. But after winning his 5th race,Reno takes lead in most laps led table. Also last race had the 6th biggest victory margin with 16.35 seconds after just over of half an hour racing.
Last edited by Eclipsed, Sun, 18 Mar 2012 14:44. Reason : Picture link update
Eclipsed 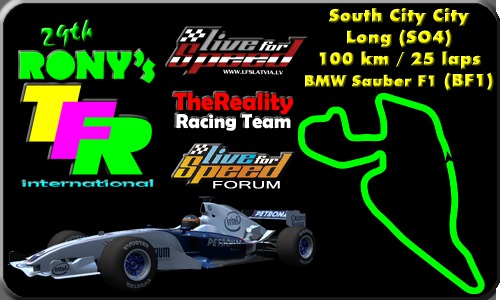 Since this is LFS community year-end awards time,I'll describe this event differently: The current 3rd best voted fun event will have it's 29th edition using 2nd least favourite car (why???) in a non-nominated track! In other words - let's unleash the 720 horsepowers onto 4 kilometers long "City Long" configuration in the South City! The fastest car in one of the twistiest and toughest tracks will provide a great challenge to anyones driving skills - are you up to it?
Last edited by Eclipsed, Sun, 18 Mar 2012 14:44. Reason : Picture link update
sjava

i think this race gonna be similar to crashmas

Since this is a tough combo,I kinda want to eliminate possible crowded server jumpers without any idea what's happening on server they just jumped in,so I decided to put password so only people who are aware of event (red this thread) can join.

Server online: Click to join Password=green (will be changed after qualifying as usual)

Would like to hear any feedback about keeping this in future - putting password would mean less drivers,but eliminate those who just came to drive around in some random server and have no idea what is going on in it (as almost noone ever reads information shown when coming in server anyway).
Flame CZE

Damn, I can't miss this one!

Damn, missed again, I always think that cze is UTc +2, well, my mind is in summer time. Facepalm 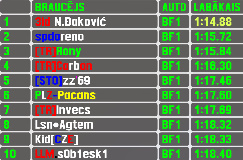 The fastest car really isn't popular - just 10 drivers took this challenge,but still - race must go on,and we really had some fun from racing! The winners of last 4 races battled also this one out to make it 5 in row - but not 4 in row for Reno,who couldn't defend his in turn 1 gained lead. N.Ðaković followed him closely until he found a chance to squeeze an oldschool Formula 1 physical pass on the tightest turn of this already tight track,to get his 2nd win in RTFRi. He also put fastest laps both in qualifying and race,making himself tied for 2nd most pole positions and tied for most fastest laps! This was also the 3rd closest finish of all time,as Reno didn't gave up after being passed,chasing the leader closely. Further down the field - the organizer Rony had tough time searching for chance to overtake his teammate Invecs,and after he succeded it - to defend his position,as Invecs started to pick up pace later in race. But in the end the organizer gets his 3rd place finish,which is his 9th top5 finish (2nd most).

2 weeks rest again from this event,after it will be time for some road going car action!
Last edited by Eclipsed, Sun, 18 Mar 2012 14:45. Reason : Picture link update
N I K I

First time ever I've done an event with this machine and oh boy it's really something. The power and the speed is overwhelming, especially on a tight track like this. I had a feeling the car had so much power it had to be contained.

The race itself was one of the very best I've ever had really. Obviously most of you out there didn't expect it to be this close on this ultimately difficult combo.

But the race was all about close racing and I loved it. 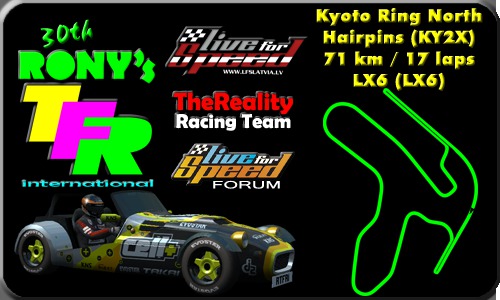 Next tuesday we gonna have some Lotus Super Seven / Caterham type cars for racing and it's the "big" and fast one - LX6. The 1.8 inline 6 cilinder engine which delivers 190 horsepowers and the weight of just over 600 kilograms (including driver) makes this car really quick both in straights and turns. The track for it - it is a modified unnoficial configuration Kyoto Ring North,adding a pair of hairpins to give a couple more overtaking possibilities. Thanks to the ClaViCo plugin,I have created new type of artificial curbs in those new tight hairpins to motivate drivers to keep distance from track dividing barrier.
A wide variety of turns from fast kinks to slow and tight hairpins will make this a good challenge for both driving skills and setting up the car,can you take it?
Last edited by Eclipsed, Sun, 18 Mar 2012 14:45. Reason : Picture link update
Eclipsed 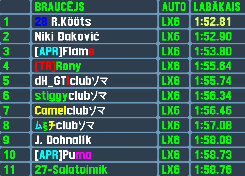 This race somehow attended a lot of czech drivers,but fastest of them still was behind 2 faster drivers - Reno won the hotlap duel with Niki Ðaković in qualifying and pulled away from runner up and first time participant Stuart in race to score his 6th win of RTFRi,also setting fastest lap in race,which is his 5th - the most of all,while Niki met with Flame and almost the rest of the field in very unlucky 1st turn incidend and retired. After very intense multiple car battles (at one point there were 5 cars grouped up),the final podium spot was taken by J. Dohnalík which is actually his first top10 finish from 3 tries. Unfortunately I myself happened to be the 2nd retirement after rolling the car in turn 3,while cutting too much curbs.

I feel very sorry for Niki, my fault. I was waiting for him but he disconnected

Apart from that, nice race from all of you guys.
N I K I

It's ok Flame. Don't worry about it. I've just had way to many of similar accidents happening to me lately. I just wonder why on Earth they keep on happening to me, always on first lap and it pisses me off because it doesn't seam like I'm doing anything wrong.
Eclipsed 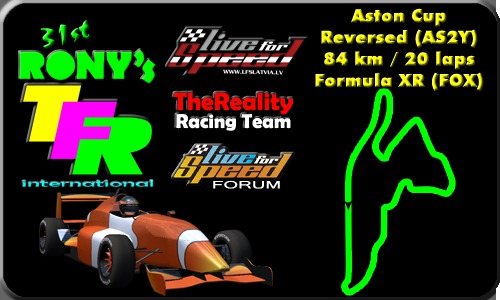 This will be the 2nd event in row with a 190 horsepower rear wheel drive lightweight car,but the difference are tyres and some aerodynamic help - the Formula XR a.k.a. FOX is very popular car among LFS users as it is quite easy to drive and also offers close racing! The venue for next race is one of the slowest new open config tracks,which is a fusion of Club reversed and Cadet tracks - named Aston Cup Reversed,a 4.2 km long track,which can be lapped in under 1 minute and 40 seconds. Layout is taken from New Open Track Configurations thread.
Track has a lot of turns and only "relaxation" possible in the main straight,where some drafting battles can be done,should be quite intense half-hour racing!
Last edited by Eclipsed, Sun, 18 Mar 2012 14:46. Reason : Picture link update
F1 mainiac

If these are the series where you say ''I'm in" and you are done . I am in