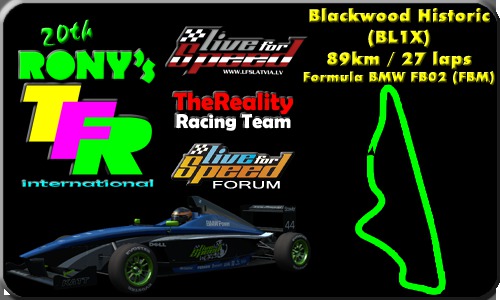 Ever wondered how would be to race the most popular LFS combination without that pesky chicane? 20th RTFRi offers you this chance - the track is so called Blackwood Historic and the car - Formula BMW FB02! Seems easy one,but 27 laps and competition around you won't give you too much time to relax.
The track layout is from New Open Track Configurations thread.
Last edited by Eclipsed, Sun, 18 Mar 2012 14:37. Reason : Picture link update
Eclipsed

Despite removing the chicane,interest about this combo was low,so I decided to give wild card starting spots for both drivers who arrived too late,so there are more that 5 drivers. The german Firedragon took lead in 4th lap and had a solid run until happened something he already had doubts before race - he lost connection just after half distance. Another wildcard starter Tom Parker from Tiger's quit after making some mistakes,leaving only TheReality Racing "union" drivers (AB counts as junior drivers team to TR). The winner of this race was Invecs - in his 7th appearance in this event he extended RTFRi winners club to 12 drivers,winning today from his 2nd pole position. All 4 active TheReality's non-demo drivers managed to position in top4,last finisher was Pacans,who run out of fuel at last lap loosing 4th place.

RTFRi will be also next week,due to need to shuffle weeks so it's not in same week as Baltic Cup,21st event will be run with some of the road going cars,see you there!
Last edited by Eclipsed, Sun, 18 Mar 2012 14:37. Reason : Picture link update
zippytheone

Too many mistakes caused by front left being a damned ass after 18 laps :L And then game went all funny and crashed at that stupid chicane. Shame but didn't have pace to win.

Coulda got pole but 3 minutes too late :\ Ahh well was fun whilst it lasted. Had some nice side-by-side action with Sascha on lap 1

Was 4 wide through back stretch: 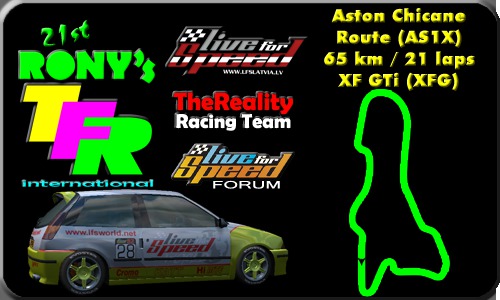 For this 2 weeks in row situation we have 2 weeks in row racing with demo cars - in the 21st event is the 1.3 liter XFG on the line. Aston Chicane Route (A12) is the track to race on - it starts as Aston Cadet,but instead of turning left after downhill turns to go back to front strech to complete the lap,the track follows Aston Historic/GP reverse for very wide and tightening 180 degree turn. After it follows 2 different left-right chicanes to complete this 3.1km lap in just over 1 and a half minutes. Corner cutting in this track is allowed as much as you don't touch the moving objects (bales/tyres),but too much cutting can result in damaged dampers,so cut on your own risk. Track doesn't feature too much overtaking opportunities in case you manage to catch equally skilled driver,mistakes can make a difference,so stay sharp!
Last edited by Eclipsed, Sun, 18 Mar 2012 14:37. Reason : Picture link update
Eclipsed 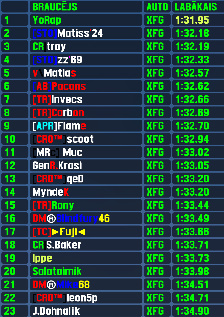 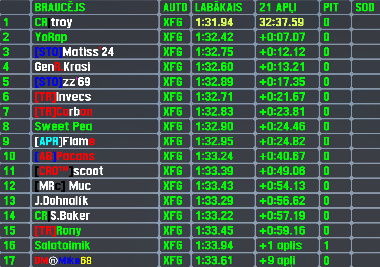 This little car atracted quite a lot drivers and offered close racing for whole race almost for everyone. Double winner Troy this evening became 3rd tripple winner of RTFRi events - starting from 2nd row,he took lead in 5th lap and run away from rest of the field,in last lap managing to make fastest lap not only for the race,but also beat previous lap record by 1 hundreth of a second. Pole sitter - first time participant from Finland YoRap - run a solid race finishing as runner up,but 3rd finished another previous winner - STO's Matiss. In 4th place,sandwiched between 2 STO drivers,finished another 1st time participant Krasi from Bulgaria,behind him in 5th - zz scored his 6th top5 finish.
A total of 20 drivers started this race,17 finished - both are new event records! 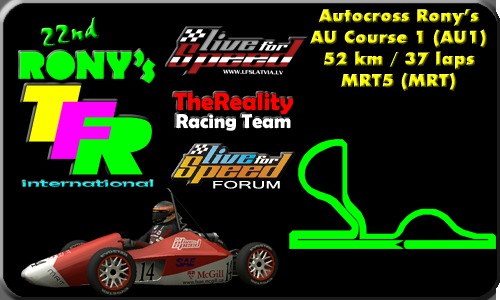 It's time for the last never used car in this event,it's the smallest car in LFS - MRT! Turbocharged bike engine,low weight and super grippy tyres makes this little thing very specific to handle,so there aren't too much fans for it. The best place to drive this car is on flat track without bumps,that's why we'll take it for a spin in Autocross area,where barriers are set to form 1.4km long Rony's AU Course 1. Only 16 drivers can join at a time here due to LFS regulations (come on,ScaViEr,increase it,please!),so only best 16 drivers will be allowed to start this race. Of course it's little optimistic to expect more attenders,but who knows. No available pitstops and lack of reverse gear could mean quick retirement,so be careful to finish this one!
Last edited by Eclipsed, Sun, 18 Mar 2012 14:38. Reason : Picture link update
Eclipsed

Along came "Sweet Pea" Vincper and made everyone else look like they're driving shopping carts - the freshest italian based Playerzone team's signment dominated both qualifying and race,taking first win for Netherlands in this event! He led this race from green to chequered,beating runner-up STO's Zz from Latvia by more than a half of a minute in this shortest and slowest ever RTFRi event (52km; 97km/h). Last step on podium and also last driver in lead lap was greek driver K.Nestoras presenting TDRT. Otherwise this race felt like a endurance event as most of the passes were lapping because of the short track and various racing speeds. Also drivers had to rescue others twice,who happened to be turned car's nose against barriers (one was me,thanks Matīss!).

After two weeks we meet up again for another race,this time with some faster but less grippy cars,see you then!
Last edited by Eclipsed, Sun, 18 Mar 2012 14:38. Reason : Picture link update
versis

Thank you Rony for being brave enough to set up an MRT race, had great fun although some bad luck in the race. Grats to Vincper, amazing performance. See you next time

The most powerful road-legal car is on the line for the next event - of course it's the FZ50,also the heaviest car in LFS with 1380kg. The track is chosen quite hard one - basically it's FE Gold reversed,but with removed the most of the FE Club part,and the toughest part - a 90° turn which leads track to railway/bridge straight,is replaced by tightening hairpin using FE Green final turn! The track is 2.6 kilometers long and I named it FE Half Gold,race will start from usual FE Gold reversed grid and finish line is placed right after underpass of the bridge.
Track is quite demanding from driver,so is the car - are you ready for this challenge?
Eclipsed 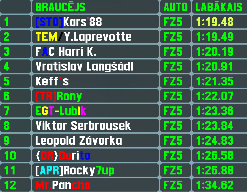 Statistics / Event rating and other statistics

After some time away from this event and LFS overall,Kars made his return to RTFRi and with style - he took his 4th pole position beating Y.Laprevotte just by 1 hudreth of a second. Unfortunately due to some business in real life he couldn't start,letting french driver (or according to LFSW - greenland... emm... -ish

) to start from best starting position,but neither he could convert that to a victory,due to overheating tyres. So the winner is first time participant from Finland - Finnish Automobile Club member Harri K.,who run a solid race scoring first win and fastest lap for his country in this event and becoming a 14th member of RTFRi winners club.

2 weeks break and we return for some grip racing again!

Do I sign-up here, if so here are my details 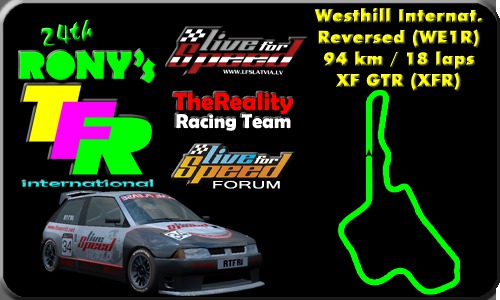 It's the first ever RTFRi visit to this single configuration track - Westhill International will be run in reverse direction with one of the small GTR machines - XF GTR.
If not careful with driving,this FWD car can hurt it's front tyres easily,so control your pace to stay out of trouble!
Last edited by Eclipsed, Sun, 18 Mar 2012 14:39. Reason : Picture link update
Eclipsed 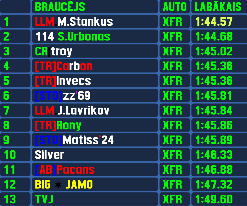 Before this event we had 3 drivers tied for the most winning driver title in RTFRi,but tonight Troy solved this tie and scored his 4th win,becoming the only most winning driver. By scoring also the fastest lap of the race,he tops this chart too - he has now 4 wins,4 fastest laps and 1 pole position in 4 appearances. TheReality Racing Team's most progressing driver Invecs managed to sqeeze in for 2nd place finish right at the finish line after a fight in last lap with the first lithuanian polesitter M.Stankus from Last Lap Motorsports,who participated in RTFRi for the first time. Otherwise this race was quite intense - a lot of fights for position through out the race,especially the 4 way battle for the lead in early stages. There were also 2 incidents leading to ugly exchange of words,but after checking them,I can't see other reason than frustration for lost position or time on track,since both incidents can be ruled as racing incidents without any particular fault.

2 weeks of rest,and then we will start some engines,which puts it's power on race surface without the grip of slick tyres!

was wanting to take part in this after hearing good reviews but my connection didn't like the server, so to avoid incidents, I left.
mrkela

Server name is Ronys Tuesdays Fun Race as mentioned in the OP, but you may not be able to access it unless it is in Demo mode.
Eclipsed

It won't be in demo mode,even if sometimes there are less drivers than demo maximum of 15. Sometimes S1 will allow to participate.

Anyway - it's next tuesday,check calendar! 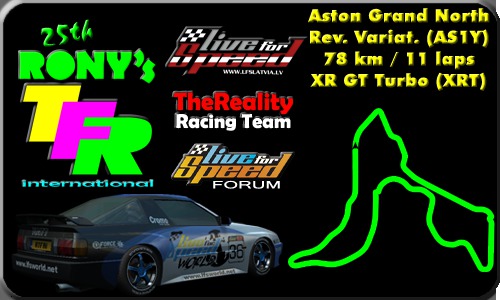 The quarter-century event is celebrated with one of the most basic cars of LFS - the turbocharged XR GT! It's both the heaviest and most powerful car of the TBO class - it's 247 horsepowers are delivered to rear wheels for a lot of driving fun. The venue this time is an open configuration track - named as Aston Grand North Reversed (A13),7.1 kilometers long combination of original AS North,AS National and AS Club configurations,but with added 2 challenging right-left chicanes,both have braking areas while turning,each in different dirrection. Chicanes are made pretty wide,insides of them are layed out with speed humps as improvised curbs - use them at your own risk as it's allowed to cut over them (as usual - everything without touching moving objects like bales/tyres etc. counts as legal). Pit entry is a tricky part in this track because it's right on the racing line,so in case you need to go in pits (although it's not mandatory as always),you should signalize either with turn signal or hazard lights,or at least type "pits" in chat!
The track is long and wide,but even small mistakes can hurt a lot and tyres can get over comfortable temperatures,so control your driving to be on top!
Last edited by Eclipsed, Sun, 18 Mar 2012 14:40. Reason : Picture link update
Kid222

Cool event, i had good fun.

So did I, great race with lots of people, especially with Gener_AL

the race from my perspective
Eclipsed 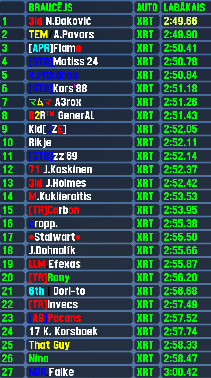 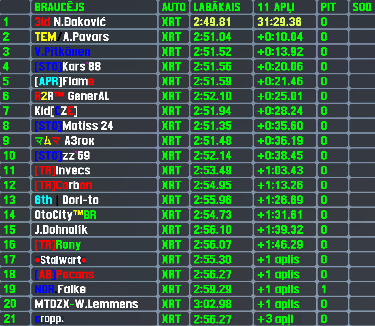 Statistics / Event rating and other statistics (Will be updated tomorrow evening)

This combination attracted a lot of drivers,making the quarter century event as the most attended one! Even if there were more than 32 drivers attempting to qualify,27 were classified as qualified,24 started the race,but 21 finished (2 were just classified so,as one timed out at his last lap,other quit after finishing more than half race) - all af those figures are new event reckords!

There was something else new at this event - it was live streamed for the first time as one of the drivers - NDR's Falke streamed live his point of view of the race,to see,check post above!

First time participant N.Ðaković from Bosnia and Herzegovina dominated the whole evening,not only by just winning,but setting fastest lap times both in qualification and race,becoming the 15th member of the RTFRi winners club. The already-member A.Pavars took runner-up positions in both sessions,but another 1st timer from Finland V.Pitkänen rounded up the podium by finishing 3rd. The tripple winner Kars scored his 10th top5 finish,but despite high 3rd in qualifying,the Czech new "banhammer" Flame had to settle for 5th place finish,having his second top5 of RTFRi.

Keep the challenging tracks with around 2 min lap with fun cars and I'm sure the turn out will be at least the same.