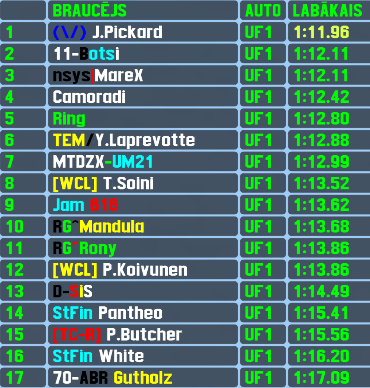 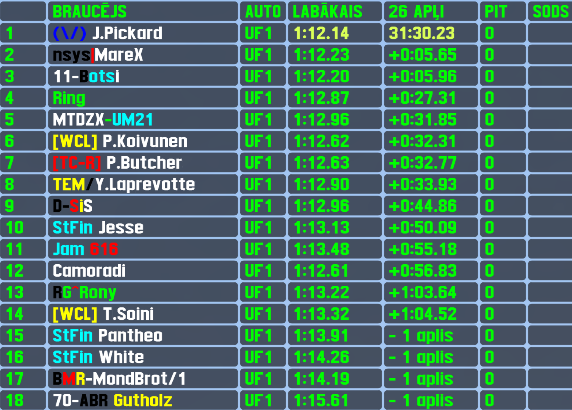 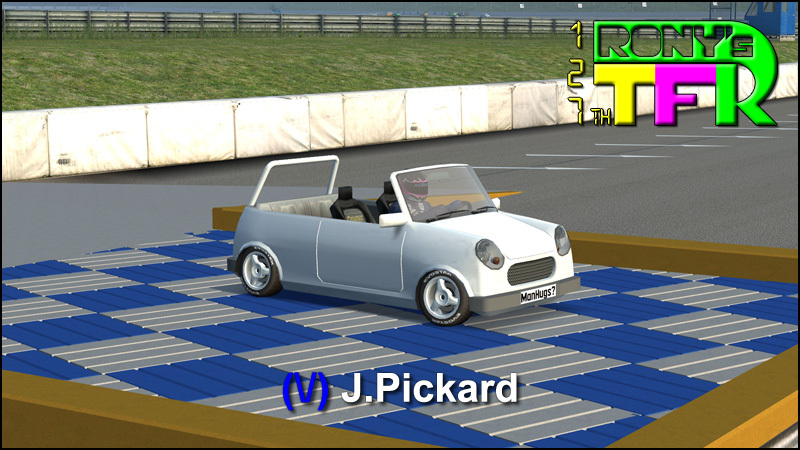 Probably one of the busiest races in last few months - track consisted of one big curvy oval part and a lot of sharp turns,not giving much opportunities to chill,especially if the car is UF1,the slowest LFS car is famous for very close racing. But one racer saw practically no racing action ahead,as he was leading all 26 laps and finished with relatively safe 5 seconds gap - J.Pickard was the only racer,who has set a laptime under 1:12,taking his first pole position in qualifying,also setting his first fastest lap of the race on his way to 1st victory in RTFR races,also taking 3rd top5 finish. J.Pickard becomes 48th driver,who has a RTFR win under his belt,2nd under english flag,bringing England 4th victory. Marex advanced himself by one position during the race and repeated his best finish - 2nd,scoring 7th top5 position for himself,the one,who was overtaken - Botsi - finished 3rd,which is his 9th top5 finish. 5th top5 finish for Ring,who also gained a position and finished 4th,but 5th on scoreboard was UM21,3rd entry in top5 column for him.

Can't imagine possibility of having a race with slower average speed with slick tyre cars than today's one while,so in 2 weeks we will deffinitelly pick up pace in our next race,don't miss that one!
Eclipsed 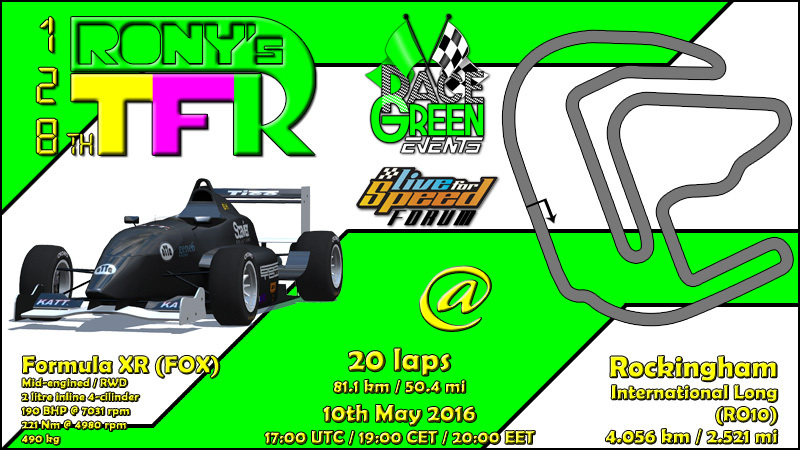 Server is up and running: Ronys Tuesdays Fun Race (feel free to spam the Airio top table with your laptimes)
versis

Looks interesting. No practice at all, but maybe I'll join just for fun if possible.
MandulAA

Great race!
It would be great if someone sent me a replay of the race

Here it is, even with post-race... banter 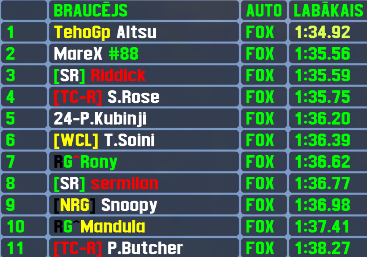 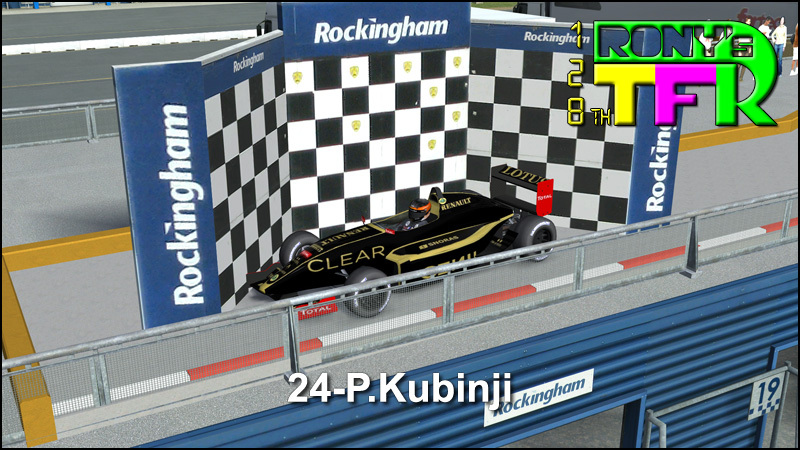 Despite being one of the lowest attended events in this year,this one was somewhat overshadowed by negative emotions. The frustration is understandable,but this still does not make offensive language right! Since there was so much discussions (and still no real reports/protests,just complaints about atmosphere),the incident before first hairpin on lap 2 was reviewed - despite S.Rose making quite agressive overtaking move,the contact was caused by late blocking manouvre of Riddick,who deffinitely turned wheel left much earlier then normally. I cannot see this anything else as racing incident between 2 hardheaded racers,who does not want to give each other room.

In qualifying the newcomer Altsu proved his advantage over the rest and set the fastest lap which was almost a second under official world record time,he brought Finland the 31st pole position. But,he retired very early giving up any chance to take victory home. P.Kubinji started very quick from 5th position,made early passes and led the race since lap 4 to be 3rd different german winner in RTFR,it was also his first top5 finish. He is now 49th different winner in RTFR history. (who will be the 50th???) Marex led first 3 laps,but had to concede to winner's pace,later he had a lucky escape when both TC-R drivers tangled ahead of him and brought home another 2nd place finish and 8th top5 finish,last step on the podium was taked by S.Rose,who also repeated his best achievement,5th top5 finish for him. 7th top5 finish for P.Butcher with 4th position,while Sermilan closed up top5 with his 3rd attendance in it.

Thanks. Uploaded the race here: 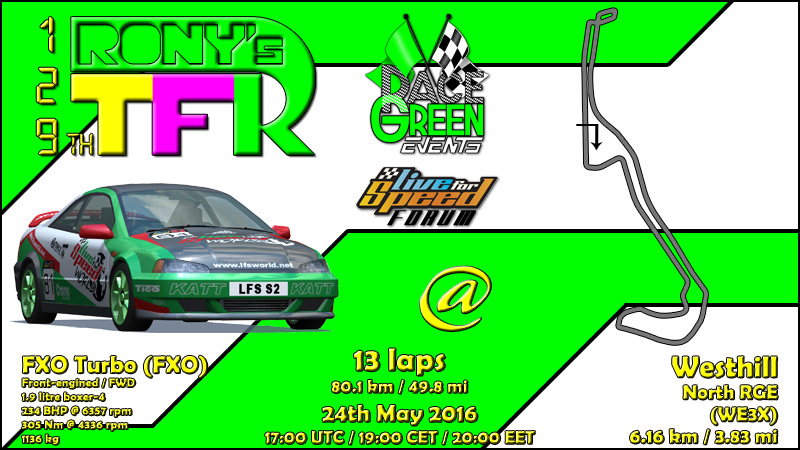 Server is up and running: Ronys Tuesdays Fun Race (feel free to spam the Airio top table with your laptimes)
versis

Oh cock :-D I dislike the car but the track looks fun!
lucaf

I try to be there!
Racon

OH MY GOD! What an amazing layout!!! Could be much more fun with some RWD!

Folks, dont miss this one! Soon!

thank you for the race!

Spent a while with the replay. You guys are really pro drivers. How dramatic moments, how bad luck for Snoopy, how awesomecrazy overtake/lapping by UM21, how funny drifting by Joona, so much nice shots saved by jpg, can I share them somewhere?

Gosh... what a race, I mean I got so angry when I got crashed by Marex got crashed. So awesome track and awesome race.

Had to go maximum, but result was crash, got almost stuck by fence, tried Shift-S but not enough quickly.

yea, sorry about that incident UM21, as you saw we were battling for 1st place on the fastest area of the track, theres space exactly for two cars, no mistakes and of course I did one, my tyres touched the grass (exactly in the corner) and I couldnt get my car back, ended up in bollard at full speed, felt so bad about it, because I really wanted to finish the race. I knew you were MAD at me, and you should be, I would be too, sorry once again for ruining your race, probably I had to spectate a little bit faster, but I was hoping to save it!


Thanks for the great track Rony, it was really awesome and enjoyable to drive. And I wouldnt change the car as many people were complaining, it was great as it was. More stuff like this

Great shots! Seems like I forgot to set my numberplate ... what a shame

By the way, you should check out imgur because its great to share more pictures at once and its better quality. Anyway, here's my livestream uploaded on YouTube:

Agreed! I think it's just that FXO isn't loved by many (including me), but it was a great match for this layout. I also encourage you, Rony, to continue selecting cars that aren't everyone's darling. Makes it so much more interesting. In the end, we had quite a nice starter field, didn't we? :-) Anyway, really pleased with my finish despite the meager preparation.
UnknownMaster21

btw interesting how first 5 laps your right front tyre heated more inside, then in one lap it changed and the rest of the race heated more outside
Last edited by lucaf, Wed, 25 May 2016 19:06.
Racon

Joined : Mon, 25 Dec 2006 11:53
Posts : 1054
Online at :
PiranMOTORally
Nice pics and vid, Lucaf and Mandula - always good to see. Mandula's tyre-heating changed cause he dinged the suspension on that corner and changed the camber

That's right, I had missed some corners banging into the side railing, that's the cause of the tyre-heating change, probably.
Eclipsed 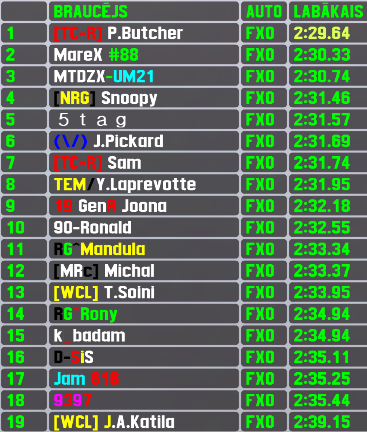 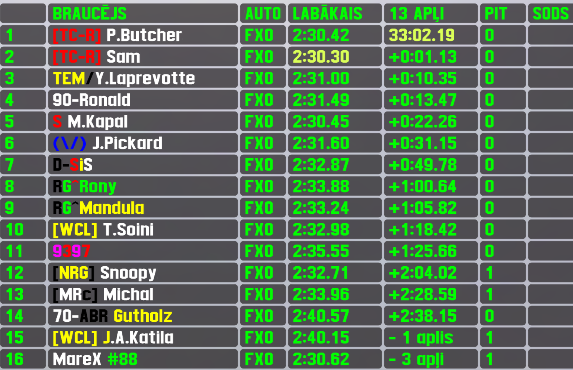 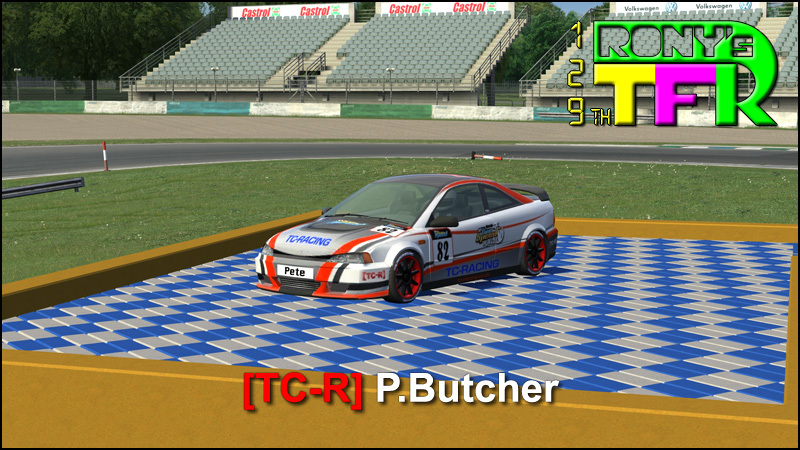 The last race brought to racers a good display of difference between closed circuit racing and road racing - despite car reaching similar top speeds on both parts of the race course,the felt speed difference was huge and any small mistake would end the car in trees. P.Butcher was the first (and until now the only) driver to beat 2:30 laptime mark and secured himself 2nd pole position of RTFR. Allthough he got passed few times,P.Butcher was able to return to lead and took also the 2nd win of RTFR,also finishing in top5 for the 8th time. Obviously it was no co-incident,as his first win was in very similar racetrack - Westhill Eastpark Raceway was the venue of his previous victory,using other road legal car. Even with racing side by side with the winner and leading 2 laps,Sam had to concede to his teammate and finished 2nd in his first appearance in RTFR,but he managed to bring home at least one achievement as he set the fastest lap of the race in lap 9,which is first such achievement for Scotland,also Sam's 2nd place finish is best achievement for his country. Y.Laprevotte finished 3rd and took home 18th top5 finish for him,Ronald was 4th,which is 2 positions higher then his previous best finish,but S.Kapal closed up top5,reaching quartercentury of top5 finishes.

As usually,RTFR takes a 2 week break before next race,where some of the racetrack specific cars will be racing in more "sterile" conditions,possibly with less scary crashes.

RTFR has always been using pretty much all cars - every car has featured in 5-7 races here. Cars,that have lower average attendance (check average drivers per car sheet in stats spreadsheets) might get skiped one or two races after "plan",but everyone of them will be used at least in every 30th event.
12491623283031
32
3334364046545758