Thanks for including our fight with Maciek 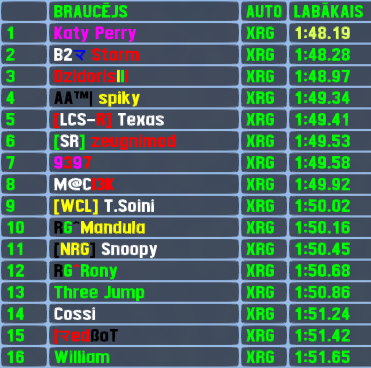 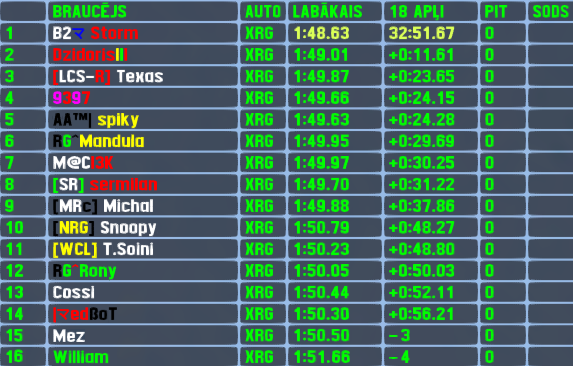 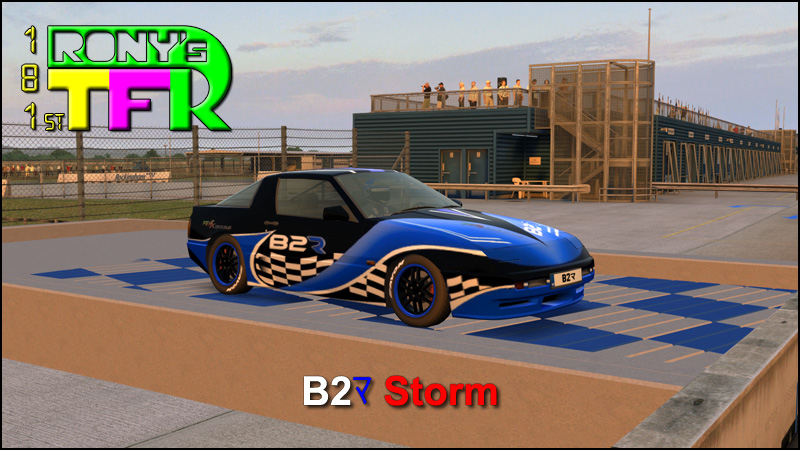 
RTFR already used Rockingham ISSC Long configuration twice and we used XRR and XRT for these races. Yesterday it was turn for the remaining XR car in this configuration.

In qualifying it was battle between 2 drivers - Katy Parry was the better one of these 2 and took the first pole position. But he or she or whatever never showed any interest to join the race. So it was up to other one of the fastest and Storm never gave a chance to rest of the field by driving home his 1st RTFR victory. His previous best result was 2nd place finish. He scored also his 2nd fastest lap of the race,7th top5 finish and 4th win for the Netherlands. Dzidoris was 2nd best in the race and had similar gap to his followers as the leader over him,8th top5 finish for him. The remaining top5 positions were up to direct battle to decide the finishing order. Texas came out best and finished ahead of the small group,taking his best RTFR finish - 3rd position,one place better than before,2nd top5 finish for him. 9397 was 4th,which is his 5th top5 finish,but just behind him - Spiky,earning his 2nd top5 finish.

Already next week RTFR action continues with the extended version - in 19th RTFR XL we're having other XR car for racing. XRR will be run in Aston GP configuration,which could be considered as pretty classic GTR race. Full details will be posted during this week. Then week after that normal RTFR returns with some slick tyre cars for action - to be decided as always in the weekend before it.


Well,I discussed the incident with Mez,we both feel kinda sorry for the misshap. He was racing very defencibly during late phase which reduced pace,so I was trying hard to avoid any contacts,but somehow it was bound to happen - it's a race for position and as a racer everyone would try to use the situation to advance. I saw a chance,he closed it,rest you can see...

I was just joking about that

Clearly a race incident. Tight corner, you put your nose on the inside (as you should), not enough overlap though, he didn't give you enough of space, both drivers suffered.

I'd do the same in your situation, but would leave you space if I was in his, as I tend to race more carefully and last longer 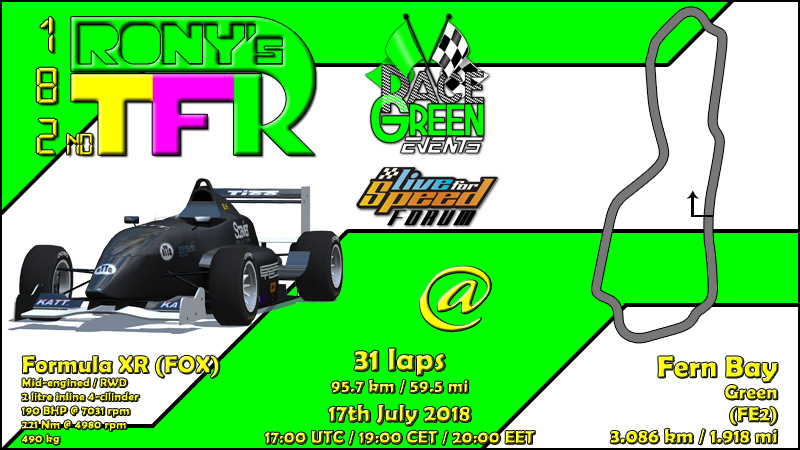 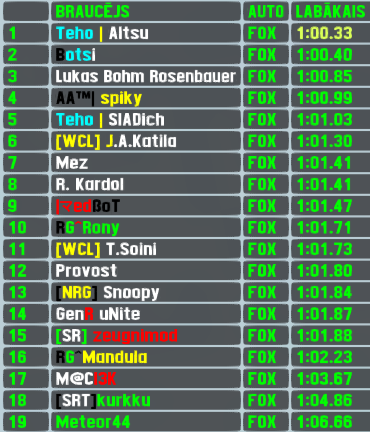 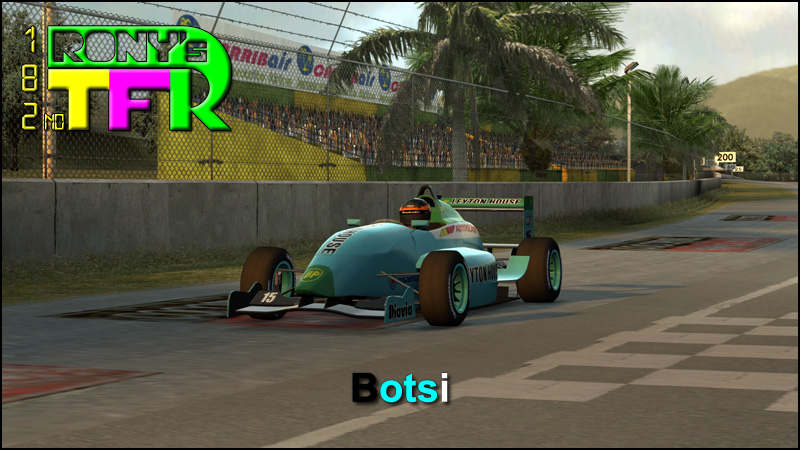 Today we had a FOX race in probably the toughest short configuration in LFS - still over average attendance and race was hot.

Altsu set the fastest lap in qualifying earning his 4th pole position,led the race early,but started to lose ground and in 15th lap made a mistake by trying to defend his position and slid off track. He never tried to recover and just spectated - DNF. Botsi had the stronger nerves and took over lead after his copatriot's mistake and never gave it up - 10th RTFR victory for him,tying with A.Wiśniewski for 3rd place in most wins chart,it was also his 22nd top5 finish. Mr.Rosenbauer tried to chase hard the leader,got even withing striking distance,but could not find a way past him,so he had to settle for 2nd place,which is now his new best finish in RTFR,3rd top5 for him,but during chase he set fastest lap of the race,which is his 2nd. Siadich was in secure position for 3rd place in his 1st appearance here,Rony finished 4th picking up 73rd top5 finish,but top5 was closed by Mandula - 9th top5 finish for him.

In 2 weeks the normal RTFR will return with one of the street legal cars,but in 3 weeks the next RTFR XL is scheduled. Unfortunatelly the winner of last race Average Joe has still not submitted his choise for next combo and the time to submit is over,so the back up plan to pick the next combo is activated by using simple methods:
Car - the most popular of the least used cars will be selected. 7 cars have not been used in RTFR XL so far,the most popular from them in normal RTFR is XR GT (17.8 racers per event).
Track - the least used environment will be selected. Only Autocross environment hasn't hosted an XL race and most attended race in this environment in RTFR was in Hong Kong E-Prix layout (23 guests).
So the combo for 20th RTFR XL is XRG @ AU Hong Kong E-Prix as it is deemed to be proper.
michal 1279

@michal I'd say Mid-Town Ring. Check it out in layout forum, it will host better race than the EPrix circuit

I rank my layouts in terms of race grade. Eprix is a Grade B (C being the lowest). Mid Town is a A, it has better appointments and is better suited to host larger races. Even has its own marshalling wall gaps!

But that being said, I'd love to see the Eprix getting another run, would be much more interesting seeing if the XRGs produce a tighter race than the slippy LX6s!
Last edited by MicroSpecV, Wed, 18 Jul 2018 00:58.
Spiiiky

this was quite interesting combo for me, I just wish I was little more careful

almost recovered from spin in 2nd lap, but then spinned again at the same place in lap 14 and decided to retire
Eclipsed 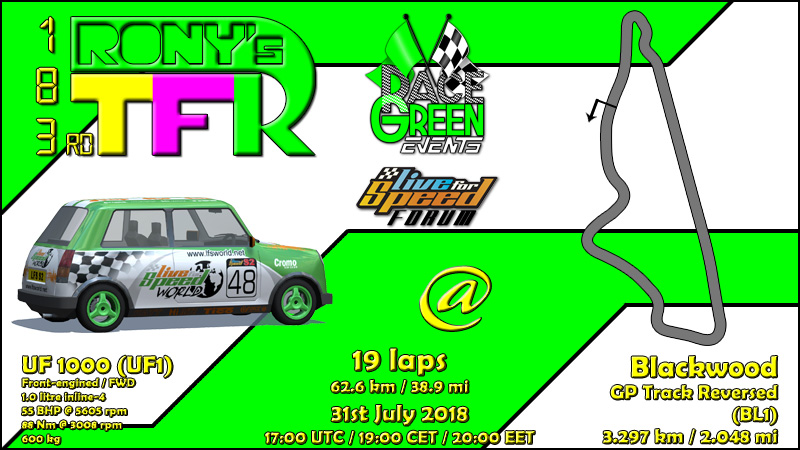 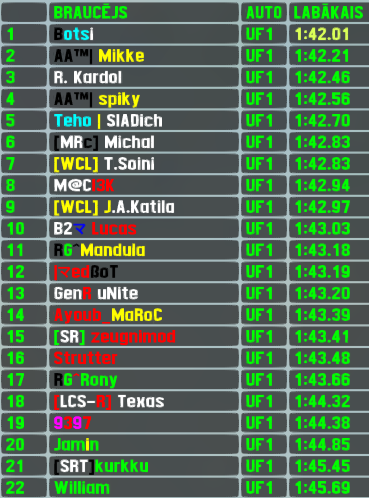 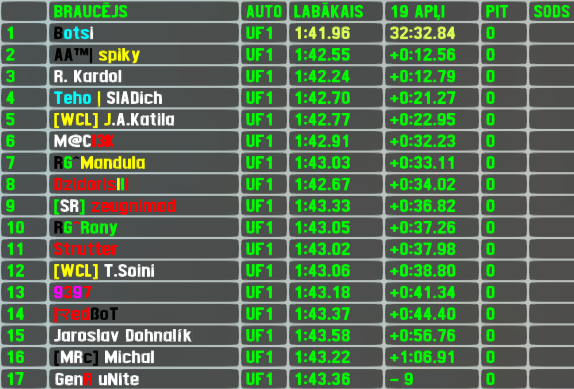 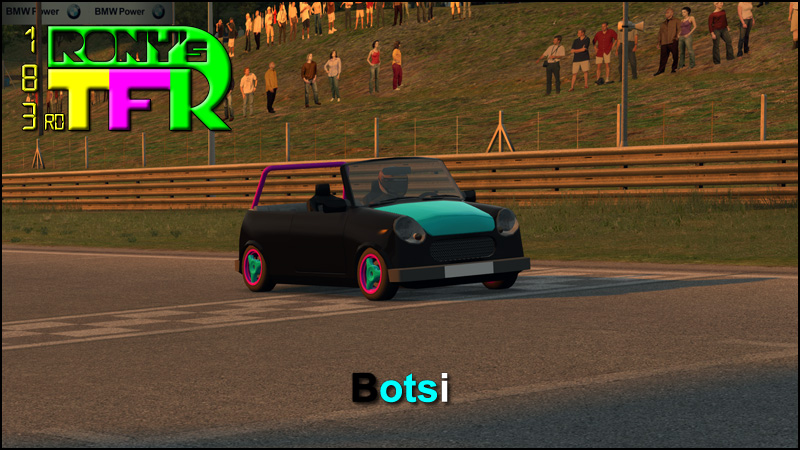 7th race in row with over average attendance - 3rd most popular car of RTFR UF1 proved to be popular again and provided a lot of racing,including all aspects of it.

One of the aspects was domination - Botsi was clearly fastest in both sessions,allthough in qualifying he had close opponent. Botsi led every single meter of the race and celebrated back to back wins,becoming 12th driver to have a winning streak. It was his 11th win in RTFR,just 4 apart of all time most,also he gathered up 10th pole position,9th fastest lap of the race and 23rd top5 finish to his stats. He also set a new world record with UF1 in this and other Blackwood reversed track today. Spiky climbed up to 2nd early in the race and was able to hold the position until finish and it was his best result in RTFR,improved by 2 positions,3rd top5 for him. It was also best ever finish for any slovakian driver. After losing few positions early,R.Kardol climbed up to 3rd position and run out of laps to get higher,9th top5 finish in his book. 4th was Siadich - a top5 finish also in his 2nd race here,top5 was closed by J.A.Katila,who earned his 13th top5 finish.

Already next week it's time for RTFR XL - combo was already out for testing,full info will follow in a day or two. A week after that the normal RTFR will return with one of the slick tyre cars,more info as always in the weekend before.
Eclipsed 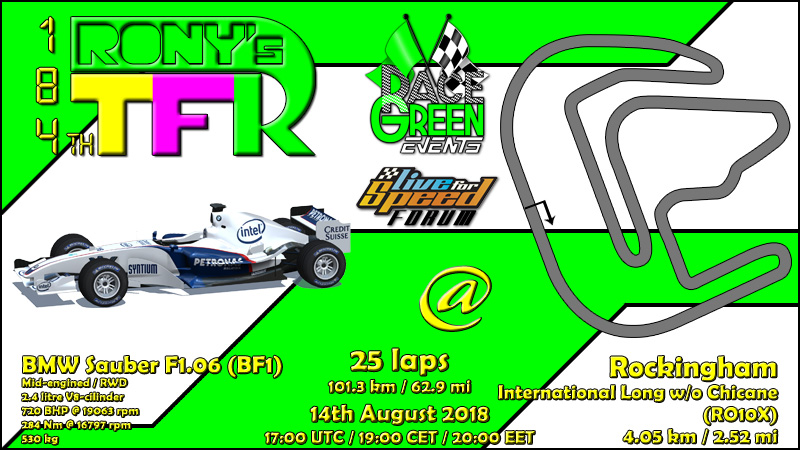 Server is up and running: Ronys Tuesdays Fun Race (feel free to spam the Airio top table with your laptimes)
jackson93

It's little screen but with great people because it's deserving to be honoured for at least trying to survive race with BMW Sauber F1 car.
lucaf 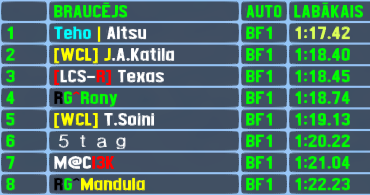 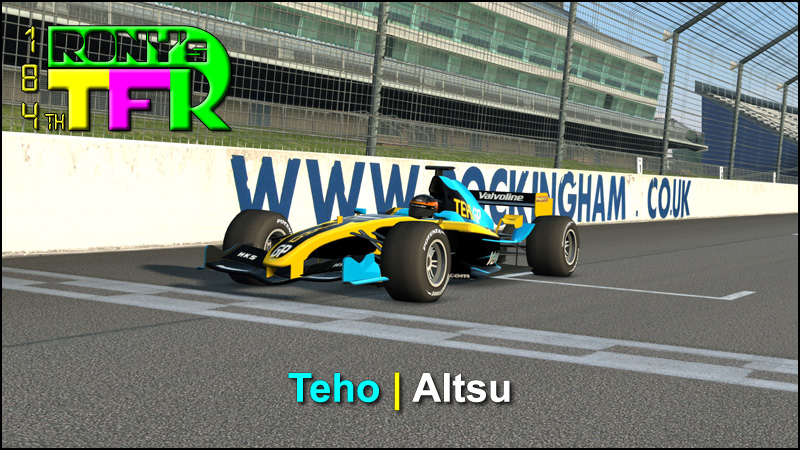 The real world car on a tight real world circuit was a tough combo and without surprise not many were up to it. Both double winning streaks ended yesterday,but we're ready for new ones.

Altsu was unchallenged yesterday - he set the fastest lap in qualifying with almost 1 second margin and took his 5th pole position,in race he led every single meter of the race,earning his 3rd race win and also 3rd fastest lap of the race,11 top5 finishes now in his account. With 47.76s gap to winner (8th biggest margin of victory) best of the rest was Rony,who finished 2nd despite dropping to last position in 1st lap,74th top5 finish added to his stats,T.Soini tried to escape and keep 2nd place,but had to concede and finish 3rd,repeating his best finish with his 15th top5 finish. Remaining top5 finishers had more than enough adventures around the track,costing time and positions - 5tag finished 4th,which is his 1st finish in RTFR with 2nd try,J.A.Katila closed the top5 for the 2nd race in row,increasing the amount of his top5 finishes to 14,he improved his best qualifying position from 3rd to 2nd though.

With this race the Race Green Events activities of this august month are over - also the normal RTFR is taking XL break and will return after 4 weeks instead of 2,where it will feature some of the road going cars. During this "vacation" planning and preperation for the next V8 Racing League season will be done,which is set to start in 16th september - more info as always in this forum.
Eclipsed 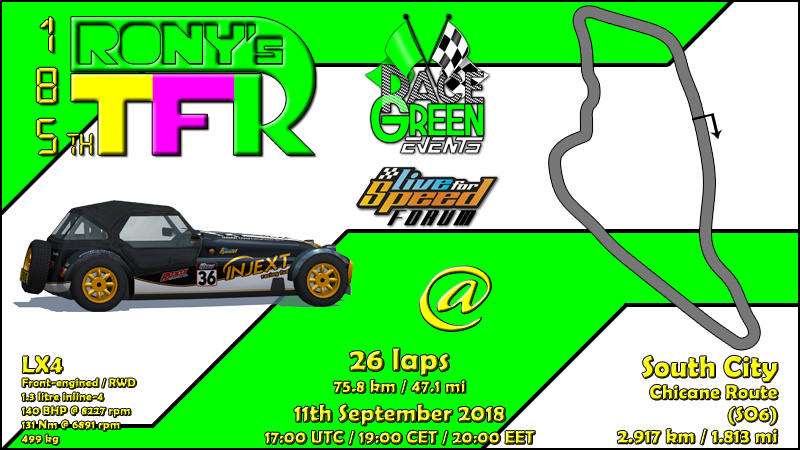 This is worth the try i just need a damn reminder tried to catch Rony s races few times already but always fail... I do not want to miss this.
lucaf

I dont want to be the last one lmao
Litro

You really ought to add these races to your calendar and get it to remind you a few hours beforehand.
Tomislav531

Yeah I really should since the start of this month my free time is very unbalanced i jump on lfs from time to time when I can. Maybe I could of catch the start but barely but qualifications no chance.
mbutcher

Grids are small these days, start at the back and battle through, that's more fun anyway.
Tomislav531

if I get lucky and do like the combo I sure will, probably will miss this weeks fragmaster too.
MicroSpecV

Been doing that for the past two mlg races (SRT, this) I've been in and what you said is defo a +1.
Way better fun starting at the rear having many battles rather than stuck in no-mans land. That being said I didn't qualify for the Gt2 race (P23) and I spun in yesterday's LX race

@Tomi Starting at back is definitely exciting. No need to worry 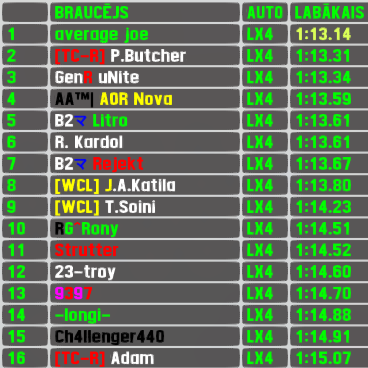 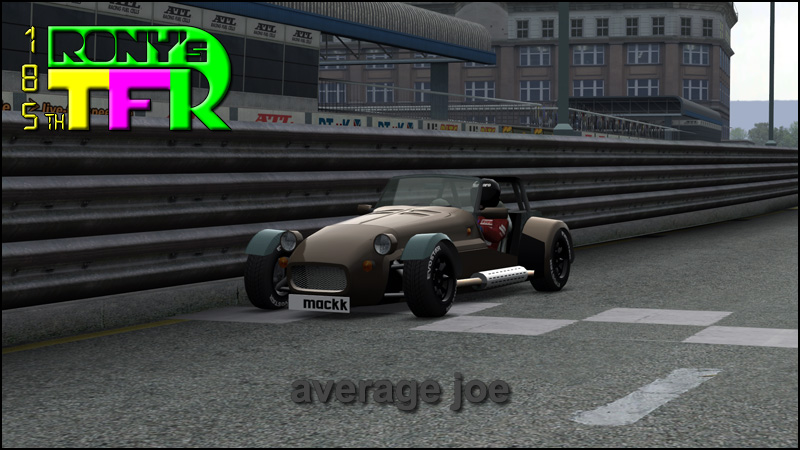 * PENALTIES :
23-troy - the unserved drive through penalty has been converted into post race 30 seconds penalty as per standart LFS rules.

The slower of two LX cars deffinitely threw a good challenge to the racers yesterday,South City's ever closing walls just increased it.

With 3 5-time winners and one 6-time winner attending some might think this race will just increase someone's good stats,but no - we have a new entry (66th) into RTFR winners club. Average Joe was fastest in both sessions for the first time and added 2nd top5 finish to his stats. P.Butcher was the only other driver to lead the race,but it was just for few meters in lap one,rest of the race was just chasing,at the end 2nd place for him and 22nd top5 finish. Rejekt joined this event for a 2nd time and with 3rd place finish he was way better than 12th he scored in 169th RTFR. The singaporian Nova made his debuth in RTFR with 4th place finish,Strutter finished 5th,earning his 4th top5 finish.

Race Green Events' action this week is not over - the 4th season of V8 Racing League starts this sunday. And next tuesday RTFR XL returns with tricky combo in Blackwood's industrial area. In 2 weeks another RTFR is planned,this time with one of the slick tyre cars,more details as always in weekend before it.
12361118253441464849
50
5152555758