Very good racing indeed lucaf! Had to watch the kids this time, maybe I can join next time.
lucaf

Thanks, I think was just lucky with tyres. Have to admit that I didn't feel sorry when Lukas spectated from the lead.

I am bit disappointed in my performance that I wasn't able to run away from Sarlin at lap 7 when I passed him first time. I didn't expect him to fight back at all, and he surprised me driving very well the last turns of lap7 then catched draft on the oval, and that was the end of my 0.4s gap that I had on him.

I will update the traditional TV broadcast video soon in my previous post...
Botswanan Salama

That is not worth a penalty imo. Sarlin was obviously trying to make a move that was not going to work out. However, lucaf started to turn left much earlier than normally in that turn, leaving Sarlin no time to react and back down. Just leaving my objective opinion here.
Eclipsed 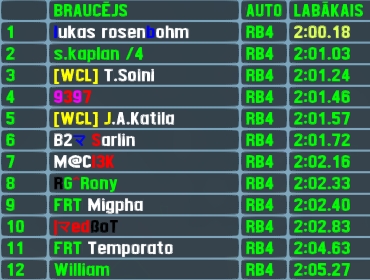 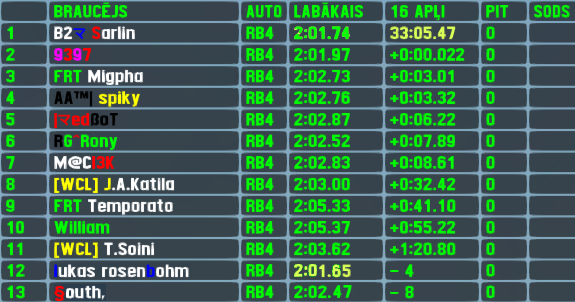 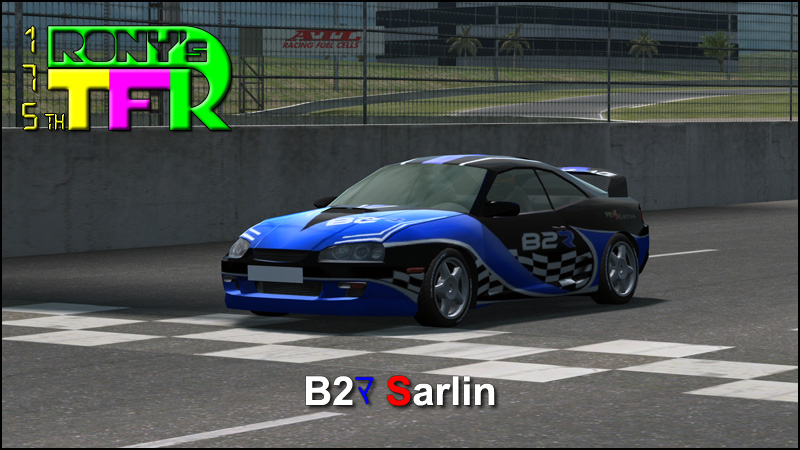 
2 drivers fighting for lead and not leaving each other enough room,resulting in few contacts. Some might call one of them more guilty in paint exchange than the other,but both have their share of not entirely clean actions. No actual action will be taken except angry shaking finger to both individuals. Let's try cleaner next time!

Lukas Rosenbohm was the fastest in qualifying despite his questions about road car tyres and their classification before the event - and earned his 1st pole position. He led 12 laps of the race and during them set his 1st and also Finland's 50th fastest lap of the race,but then suddenly retired,changing the intense fight for 2nd position into battle for the win. Both drivers exchanged positions multiple times during race and also few times during final lap. 9793 came off last corner ahead,but the first time participant Sarlin was able to catch enough draft from him during the oval final turn and passed the finn by just 1.25 meters over the finish line - calculated margin of victory was 0.022 seconds,which is 3rd smallest in RTFR history,smallest in a track that's not a complete oval. It was the 1st estonian win since 30th RTFR (7th feb,2012). Despite not winning the race,it was still the best RTFR finish for 9793 and 2nd top5 finish,while his 4th position in qualifying was 2 places improvement from previous best. 3rd was Migpha,repeating his best finish,7th top5 finish for him,4th was Spiky,improving his previous best finish by 3 positions,but the top5 was closed by Redbot,repeating his best finish for the 4th time.

Next week normal RTFR takes break and we will have RTFR XL instead. Combo is known already - FOX at Kyoto Ring GP Long. More details will be posted tomorrow due shortage of time.
lucaf

Gratz Sarlin, anyway you have suddenly became very quick after joining B2R. Next time I'll fight harder, if will have another chance

Any word on the next combo?
Eclipsed 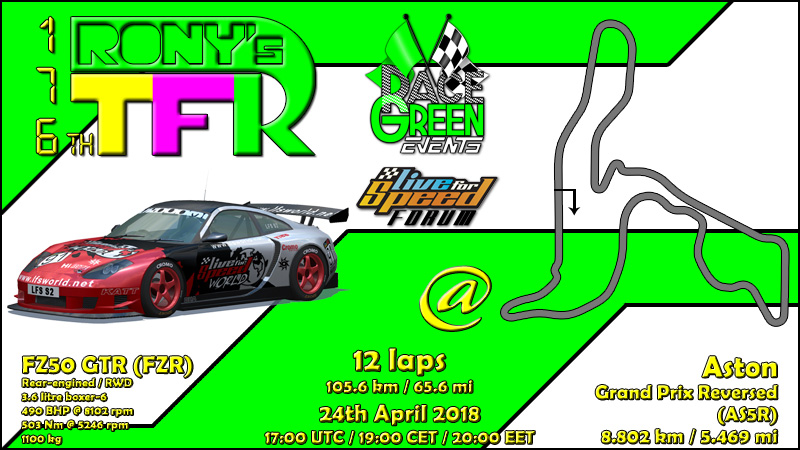 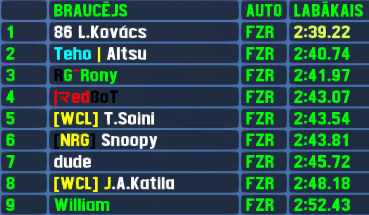 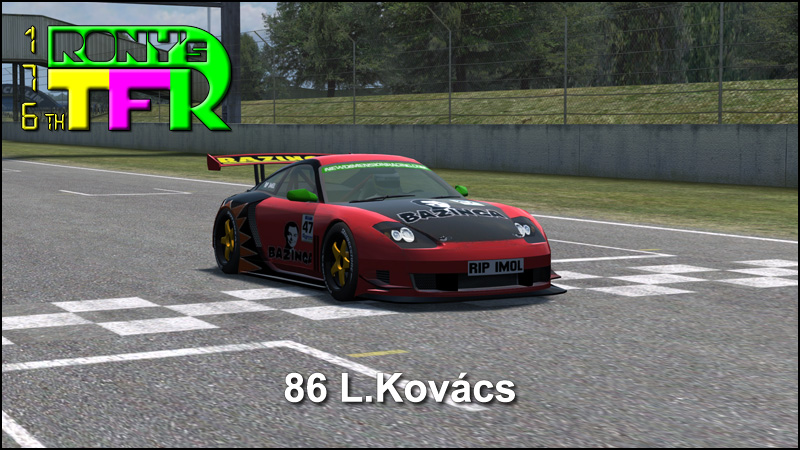 This time we had a pretty classic combo - the powerful GTR class machine at wide,fast and long Aston GP configuration,run in reversed direction. Not many attended but race still was there,even if mostly not for positions but just trying to chase the driver ahead - there were just 2 position changes in results. L.Kovács started his qualifying runs just in 2nd half of the qualifying session,but was able to set unreachable time soon,earning his 5th pole position. He led the race from green to chequered and scored his 4th win,setting 6th fastest lap of the race,6 top5 finishes in winner's account now. Altsu was the best of the rest and finished 2nd,taking his 7th top5 finish,Rony did close up to him during midrace,but could not get withing striking distance - 3rd position in finish,72nd top5 finish. T.Soini is the 2nd most active driver in this event besides organizer,but his success was struggling lately - last race's 4th position was his 1st top5 finish since 150th RTFR,15th overall. Top5 was closed by Redbot for the 3rd race in row - 5th repetition of his best finishing position in total.

Next week is the one with break from RTFR races - in 2 weeks RTFR will return with street car racing,in 3 weeks the XL version will be run using FXR at South City Chicane Route reversed.
Eclipsed 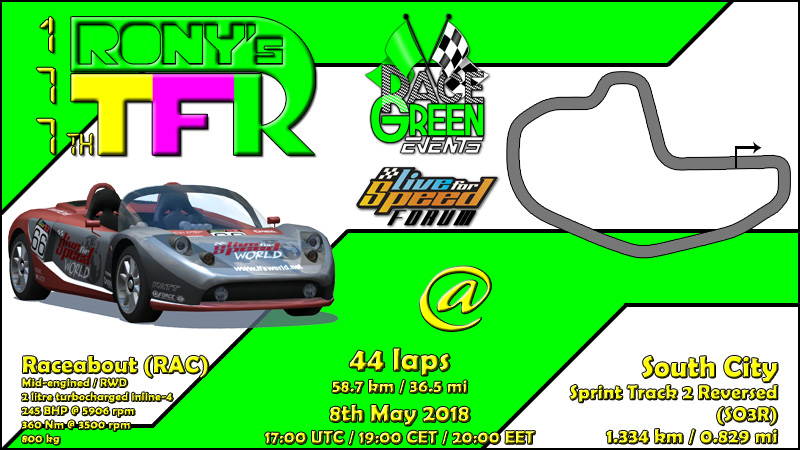 Note: Do not worry about message "Could not find position in path : playername" when joining track - it's because spawn points are placed outside normal path.

Overtaking festival! I really hope to be there
Spiiiky

I hate RAC even thought i've only driven it for a few miles, but i will hope to join tommorow

20-25kg put 100% to the front can settle the twitchyness down.
Eclipsed

Yes,it was off. Weirdly that there's nothing in server logs what could explain why,as last entry is that I started it.
Anyway - server started again.
Razor1373

Yeah and half a second per lap slower. Don't try to fool me! (althought i will give it a go and check myself, thanks for advice) 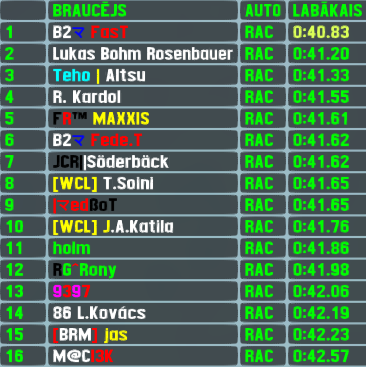 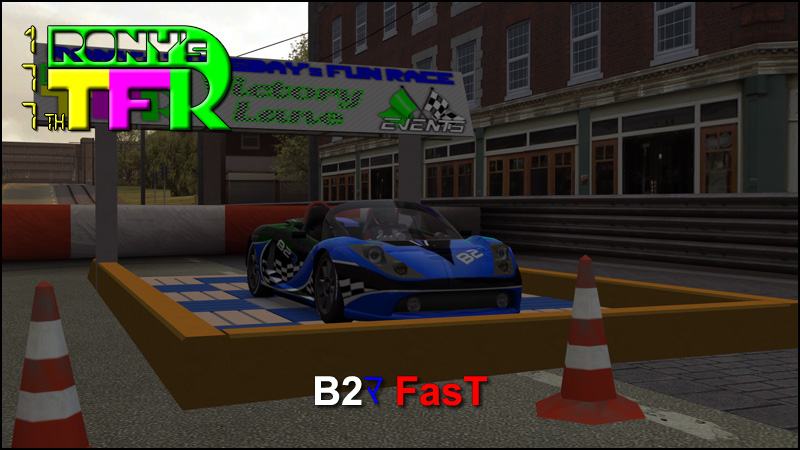 Considering spring attendance drop tendency and unpopularity of Raceabout,this was actually expected as relatively low attended race,so a short track was chosen for obvious reasons. But it broke the records - 16 drivers are 4 more than ever in RTFR race using RAC and it was even 7 more than RAC average. Go figure.
Race deffinitely was intense,everyone was working hard to keep the pace up and tyre temps down,trying to improve the position in between. Except Fast - he was just going fast and led every single meter of the race. After earning his 2nd pole position,Fast set his 3rd fastest lap during race and converted his speed into 1st RTFR victory,increasing the size of RTFR Winners Club to 64. It was also his 4th top5 finish. R.Kardol was best of the rest with his 2nd position,8 top5 finishes now collected,another previous winner Altsu finished 3rd and last on lead lap,also 8th top5 finish. One lap down and in 4th place was first time participant Maxxis from Spain,but J.A.Katila picked up 11th top5 finish by finishing 5th.

Already next week RTFR action continues with the XL race,combo is know for a while - FXR at South City Chicane Route reversed as selected by the winner of last race and in 2 weeks the normal RTFR will return with some of the racing machines,more details in weekend before it.
lucaf

Thanks Rony again for very nice event. I had interesting race setup and competitive race pace, but my destiny decided something else for me.
Eclipsed 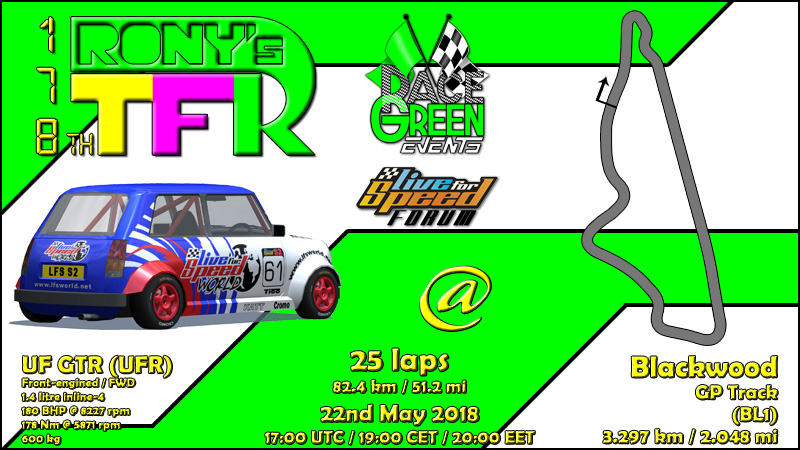 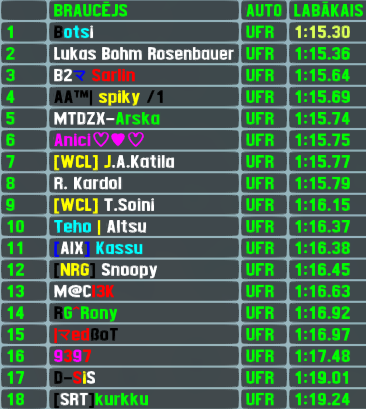 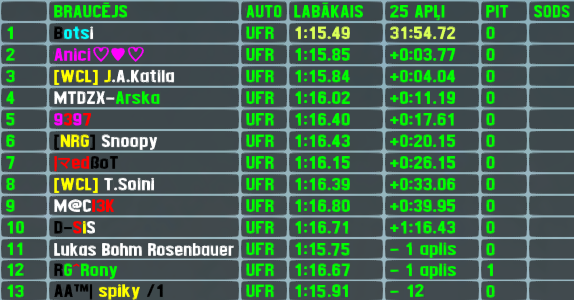 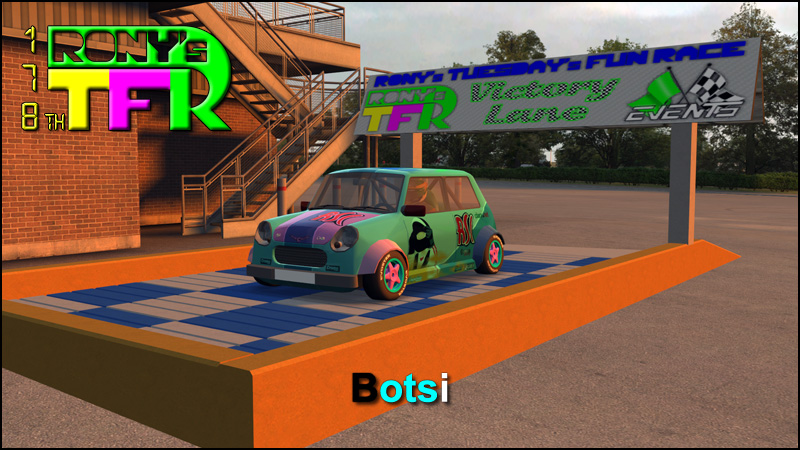 There are races that have rolling starts,yesterday we had one,where some had rolling finish. But the majority survived the tricky car and crossed the finish line. Botsi was the fastest in qualifying and also set the fastest lap in race,but we all know that he would not win the race without that little misshap from the race leader in 2nd to last corner before race finish. But in results and stats books we have Botsi celebrating his 8th win,also adding to his achievements 8th pole position,7th fastest lap and 20th top5 finish. Anici led 7 laps but had to concede to faster drivers later,still 2nd place finish for the first time participant. J.A.Katila finished just a quarter second behind 2nd place,repeated best finish again,12th top5 finish. 4th top5 finish for Arska with his 4th place,while top5 was closed by 9397,who finished in top5 for the 3rd time.

2 weeks break from RTFR events,then the normal RTFR returns with one of the street cars,another week later the XL version - since custom config is selected for next race,the RTFR server will be set with that combo for testing purposes soon.
lucaf

Such awesome battle for the lead, and in all top four. I didn't practice for that one really (maybe under ten laps), and I was expecting a big fail for my race. Instead I got slowly familiar with the car setup and finished better than in my wet dreams could expected.

That wheels only view looks so wrong... Select "draw body" and change it to hood view or in car center view or something like that.
lucaf