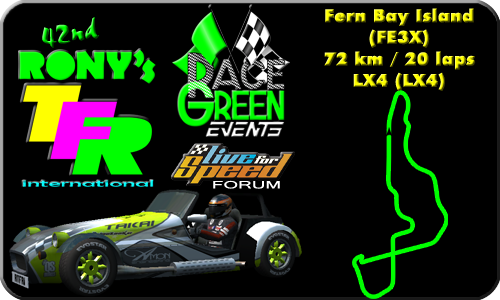 After THAT event,let's settle for some more carm tempers hopefully - in next race the car will take away all your focus! Even if it's the smaller and less powerful LX,it is still tricky enough with it's tailhappy behaviour. Location for racing - Fern Bay Island,an open config track which differs from FE Gold just with one turn - the lefthander after railway bridge section is replaced by a tight righthander,followed by opening lefthander. It's tight and twisty turn combination,but the agile LX4 will deal with it better than almost any other car out there!
Leaving too much rubber on the road will turn your rear tyres into jelly,so be careful with throtlle in longer runs!

Server is already up and running: Ronys Tuesdays Fun Race (feel free to spam the Airio top table with your laptimes)

Just a reminder - since there were no real interest turning this as more public event,race restarts still will be cancelled by Airio,so spare your shift+Rs,be careful and deal with situation!
rockclan

was more my fault tbh . would of been nothing but lfs decided to go full retard and flip me
N I K I

It's worth mention that I really enjoyed this racing with Franky. Just pure action, no strategizing with dirty intentions in our minds. I did make a perfect dive on him once, but he did follow superbly thru twisty stuff and made perfect dive back.

We discussed it and since you want to know, I never had time to see him running wide, I was on brakes all the time and I didn't spin him out.
The flip itself, I only tried to pull him out of the slide by hitting the nose of his car, but LFS resorted to terrorism.

Just makes you realize why sometimes they don't allow teammates to race each other in F1.
Eclipsed 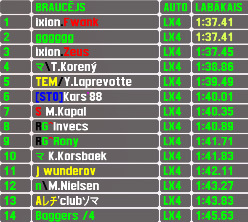 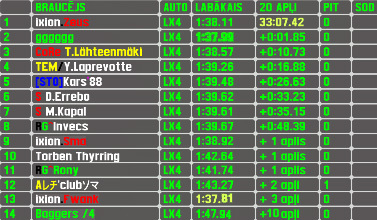 3 different race leaders - that was something new since 35th event,which is also last event that wasn't won by J.Holmes or Zeus - after some unlucky situation Zeus took lead in this race and won it,extending the 2 rival racers dominance here to 7 races in row,while 7 is also his own wins total - most of all drivers. The australian driver with a lot of "g"s in his nickname took runner-up position in his first race here - after leading the 1st lap he was passed by both ixions,another first time participant T.Lähteenmäki took the last step on podium. Y.Laprevotte finished lower than 3rd for the first time in RTFRi - he had to settle for 4th place finish yesterday (his 5th top5),while Kars took his 12th top5 with his 5th place. The fastest driver in this event was someone else - best in qualifying and fastest lap owner is Fwank,who was scored 13th after rolling his car from leading position with some teamwork 2andhalf laps before finish.

On other note: K.Korsbaek receives a warning for too agressive turn one entry - driver should never try to go for pass where it's impossible to avoid contact! If there will be similar actions from this driver,it can lead to disqualifications!
Franky.S

that moment when lfs say no

Sorry Frank, but if you'd worn another helmet, and had different numberplate. I would have felt sorry for you.

Event rating and other statistics updated! Seems like there is no need to repeat who still leads the rating,but there are some changes in other positions between best 5 - Y.Laprevotte climbs from 5th to 2nd,moving everyone else down by 1 position - J.Holmes is now 3rd,M.Kapal is 4th and Rony - 5th. There is now a total of 59 drivers,who have scored at least 1 point in latest 10 races.

In other stats - this race had 11th closest finish,which isn't really much worth to note itself,but there is interesting trend as all 3 LX4 races are between 11 closest finishes,proving that this car is the one for close racing! 2 new drivers have been able to lead at least 1 lap,making the amount of all lap leaders up to 30 (19 of them have led the most important lap - the last one).
GreyBull [CHA] 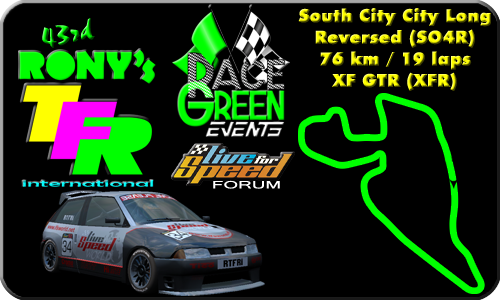 The fastest of FWD cars is our next ride - even though it's direct rival UFR is quicker in turns,XFR is everything else than slow - slick tyres,race spec suspension,rigid body - watch out,other wise you'll turn your front wheels into juice! A tough track of course is set for this car - it's our favourite city's longest configuration - 4km long City Long in reverse direction,with it's elevation turns,tight hairpin and lots of blind turns,it's anything else then easy evening city drive.
Keeping the car off walls is the best way to keep your car's cornering speed constant,stay cool!

Maybe 20 the november?
The Very End

Did someone delete som replies here? Anyway, are there replayss of this race?

The only replies deleted are the private life chitchat between Niki and his closest friends after THAT race.
Replay files - can be accessible via request,as I don't upload them all.
The Very End

Could i request the replay or has no one saved the file?
Eclipsed

Which one? I still have mprs of all RTFRi races.
Franky.S

There you go: 41st RTFRi
The Very End

It was a very interesting cat and mouse game with LoyCat. Absolutely awesome feeling to qualify on pole position and lead the race after a while, or to be exact since 39th RTFRi.

Was fun, indeed. Came in too late, so I didn't really have a chance to do my best at the qually, but was quite glad with the result that I managed ^-^
Eclipsed 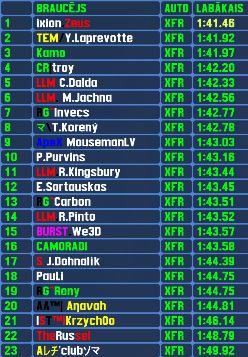 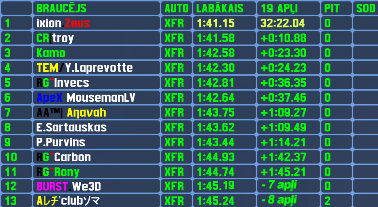 Zeus continues his dominance in this event and celebrates his: 11th pole position,8th fastest lap,14th top5 finish and what's the bigest achievement - 8th win. But the 3rd most successful driver chased him hard in this race - Troy did not let Zeus too far away until unlucky incident,which made the 5 time winner be 10 seconds behind in finish as a runner up,3rd finished a first time participant from Poland - Kamo. After missing start calls,Yann had to start from the back of the field,but he still managed to climb up to 4th place to take his 6th top5 finish,while hosting team's representer Invecs closed top5 with his 9th top5 finish.

The usual 2 weeks break will be folowed by another road tyre car race,stay tuned!