I was quite frustrated I had to start from the back at first, but at least making my way to 4th was fun. This is a really nice combo.
Eclipsed

Event rating and other statistics updated! All rating's top5 drivers kept their positions,only points have been changed - leader Zeus now has exceeded the 100 point mark by 4 points (out of 140 maximum possible),while Y.Laprevotte has reached half century,J.Holmes,M.Kapal and Rony fills the other positions. There are now 58 drivers,who have scored at least a point in last 10 races,one less than after previous event.

2 new countrys have been added to list,no drivers of them actually finished the race,joining Scotland,who was the only country with a participant,who hasn't finished a race. Brazil is still the only country which hasn't been represented in qualifying,but has a finisher. Well,so much about noticable changes in stats.

There is another new thing I want to announce: since lately event server has been joined by multiple very low experienced drivers,who obviously have no clue what is going on in server,I decided to make server password protected an hour before qualifying to keep people not knowing where they are at bay - password always will be the same: green (will be changed after qualifying as usual). I understand,that it will slightly reduce number of drivers,but it will increase the quality of them (hopefully).

And on ending note - guys,please stop that freaking restart voting after start! There always be someone who will suffer from some incident,there always will be someone unhappy about something,and if you join late (like last time 3 minutes after scheduled start while event was already suspended too long),that is only your fault... Thank you for understanding. (now I have to figure out,how to allow Airio the vote-start by traditional "Drivers - vote for start" command... :schwitz

Sorry, I was puzzled and angry that LFS decided to put me at the back for some reason.

I think that Airio would've cancelled the vote anyway...?

That's how long was the race,in terms of minutes/seconds,basically just for average speed calculation in row beside.
Eclipsed 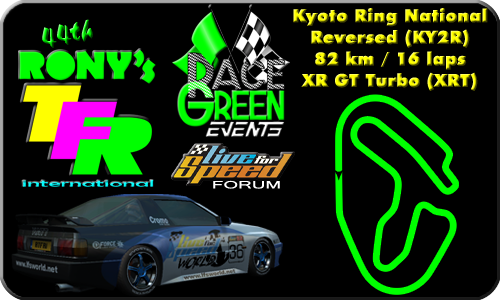 The first RTFRi with new patch will be run with the most powerful of TBO cars - the 247 HP XRT! 2 minutes laptime is the mark to beat with it in the Kyoto Ring National Reversed configuration,a 5.1km track,using the most of oval for high speed action and infield track. Even if the combo can give the "been there,done that" feeling,there will never be 2 equal races.
Pushing too early too hard can leave you without solid rubber later,as the fast oval turns tend to make tyres melt,take it easy!

Server is already up and running: Ronys Tuesdays Fun Race (feel free to spam the Airio top table with your laptimes)
MousemanLV

Great combo... I regret not being able to do this on tuesday 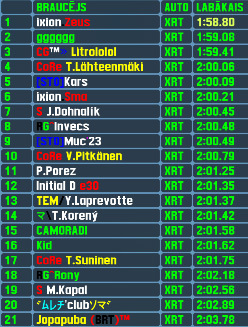 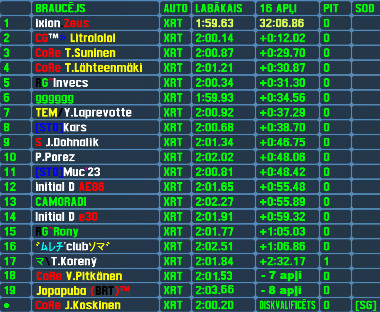 Even with password,what took away some casual drivers from this race,it was very well attended,seems like the "classic" combo attracted most of them. The winner is nothing new - unchallenged today,Zeus has reached the biggest streak for the second time - 3 wins in row and has a chance to be the first to extend to 4. But now he has 9 wins,12 pole positions,9 fastest laps and 15 top5 finishes. Litro[lolol] finally raced a bit more seriously and took his 1st podium finish since his last win in 18th event,1st time participant T.Suninen representing Core Racing finished 3rd,followed by his teammate T.Lähteenmäki,a winner day before in AWS round 1,who scored his 2nd top5 finish in 2 races,5th place was taken by fastest Race Green Autosports driver Invecs,reaching 10 top5 finishes count for himself.

As usual we take 2 weeks break,then there will be something faster to race!
MousemanLV

Zeus, u so fast.
Eclipsed

Event rating and other statistics updated! For the 2nd time in row all top 5 drivers of rating keep their positions with just points being changed. A total of 59 drivers have scored a point or more in last 10 events,1 more than after previous event. Unfortunately there are no other notable and previously unnotified changes in stats,so feel free to browse and find interesting facts yourself... 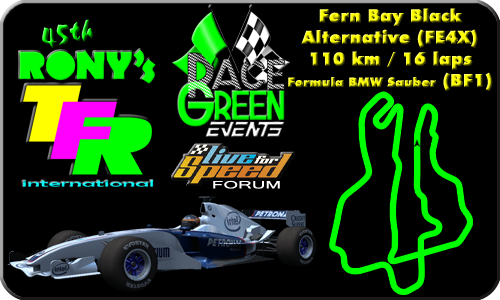 This will be the final RTFRi of the year 2012,but you really didn't thought to get away easy,don't you? It will be deffinitely one of the mentally toughest races,as we visit the longest possible full tarmac track of Fern Bay - it's the FE Black Alternative,which differs from normal Black configuration just with the added little oval part. But the 6.9km track will be rounded quite quickly as we will use the fastest car of LFS - the hi-tech Formula BMW Sauber from year 2006. Even it's not that much of a driver's car with all the traction control/engine brake reduction stuff,it's still fun to enjoy the speed by seeing the trackside fly by with 300km/h!
On statistics note - this race can go into RTFRi history,as Zeus is on the line to go for recordbreaking 4th successive win for the 2nd time,will he be able to succeed this time?
This is the part of event introduction,where usually some small sort-of-a-tip is to be found,this time there will be none really - just enjoy the race,take care of yourself and others around you! Happy new year!

Server is already up and running: Ronys Tuesdays Fun Race (feel free to spam the Airio top table with your laptimes)
Litro

But race with BF1 is very difficult

Due to internet connection problems at my side,it seems that I will have to cancel (postpone) todays race. Currently I'm having just EDGE connection (instead of HSPA or at least UMTS),even that one can't reach nowhere near it's maximum speed (current max speed is ~60kbps,it took minute to load this page). Still have some optimism that connection will be back to normal,so I will wait until 18:00 CET before canceling... Thank you O2,you're "amazing"...

I think will good to tomorrow.
Eclipsed

BF1? OK, no. That's just too much to handle with keyboard and mouse.
Eclipsed

Statistics / Event rating and other statistics (will be updated tomorrow)

The last RTFRi before the end of the world (:tilt

had very few interested drivers,so every single of them managed to finish in top 5 with 1 spare place!

Since event organizer's concentration was gone sleeping and he himself was busy crashing his car multiple times at random turns,only his teammate Invecs threw a little challenge to possible breaking of Zeus' streak,but he held his streak alive and scored the recordbreaking 4th win in row. And another pole position. And another fastest lap of the race. To give correct figures,it was his 10th win,13th pole position,10th fastest lap and 16th top5 finish,while also putting himself on top of most laps led chart. Invecs had a good pace and kept with leader for a while,setting fastest lap few times,but had to concede at the end with almost half a minute margin,it was his 11th top5 finish,3rd in row. Even with recordbreaking pit visit count,Rony still finished 3rd (12th top5 finish),which was last actual finisher,as Litro with a hat stuffed in cars intake just cruised the neccesary 50% of race distance to be scored at finish results,taking his 11th top5 finish. 5th was... Noone,as M.Kapal gave up after 1 lap. So the last RTFRi of 2012 proved to be the toughest challenge,that very few dared to accept.

So that's it for this year,merry christmas (or crashmas),happy new year! Next,46th event will be after 3 weeks of break with a slower car,which is just logical,as this was with the fastest car of LFS.

omg I mixed up the dates ((
I thought that will be today...
Eclipsed

I know. I thought that yesterday was 17 December.
I mixed up the days and numbers. I am on leave

Keyboard and BF1 is not for me.