I hate the fact that I cant do these.
SmokeyBanjo

Can't connect to server for some reason
cuprum

I'm home in time for once... Let's do this!
SmokeyBanjo

Sorry to Suzuki94 for my 2 knockouts in 2 laps (tyre and then the offtrack). Other than that i was happy with my mouse performance.
johneysvk

Got dropped somewhere in the middle of the race, other than that it was pretty fun, even though i spent 70% of the time dodging lapping cars, so many blue flags 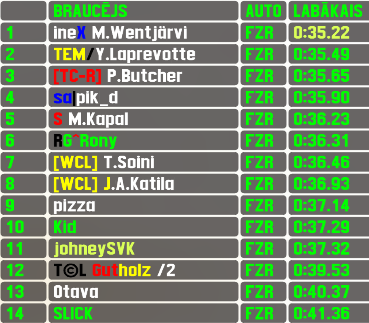 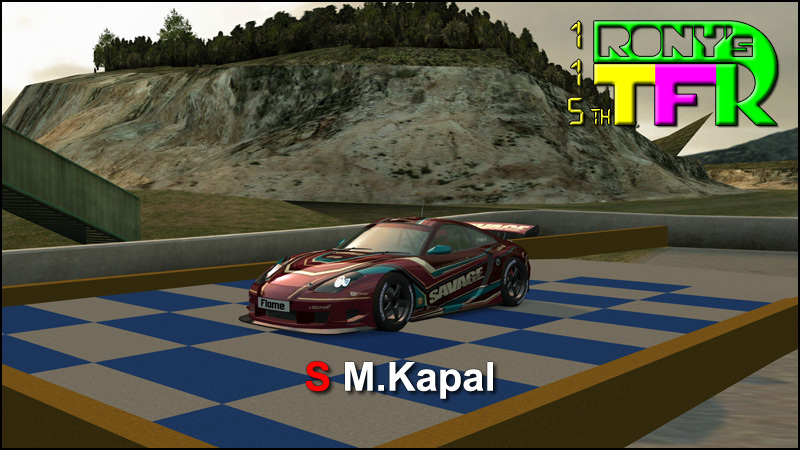 This deffinitely was quite a busy track - not just in terms of driving,but also in terms of traffic. From the start it seemed that we have a secure winner and all the fight will happen for the best of the rest position,but a lot of drama happened in final 10 laps,where the leader made a small mistake destroying the relatively safe 6 seconds gap,he built over the race and let the three driver group catch him. Despite denying any early overtake attempts,leader had to dodge couple tyres with 2 laps to go,costing him lead,while he also dodged a backmarker in final turns of race,losing also another 3 positions. So with a bit of luck included,M.Kapal becomes the 4th driver,who has won more then 5 races in RTFR history by celebrating his 6th win,it was also his 23rd top5 finish. P.Butcher finished 2nd in his 3rd race here,which is also his 3rd top5 finish,but the defending winner Y.Laprevotte closed up podium with his 13th top5 finish. 2nd top5 finish in his 2nd race for Pik_d by finishing 4th,but polesitter and leader of 50 laps of the race M.Wentjärvi did not cross the line of final lap,so he is scored 5th in race results - 2nd top5 finish for him and in qualifying he took also his 2nd pole position.

It might be hard to find even shorter track,so we will use something a bit longer in 2 weeks and it will be run with some of the road cars - stay tuned and join!
GreyBull [CHA]

4-way battle for the lead in the final laps 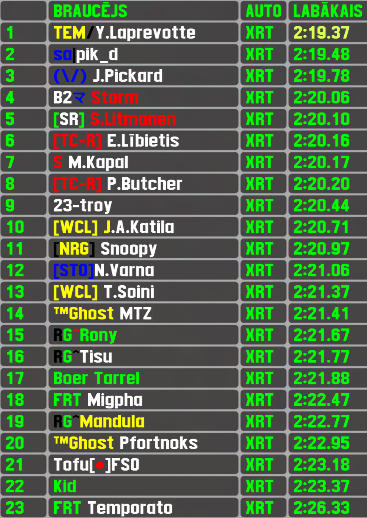 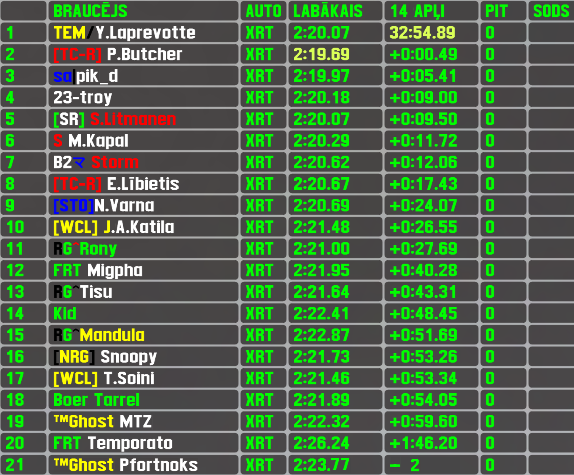 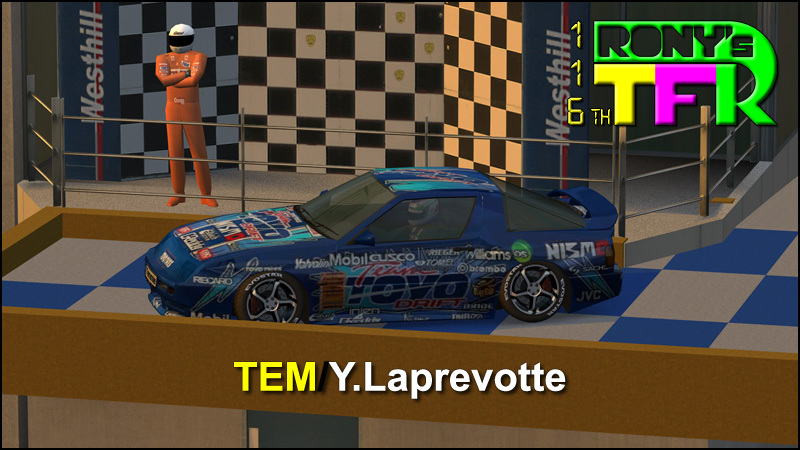 With field like this,finishing in top 5 was deffinitelly an achievement worth mentioning as racers had to put a lot of effort for their results in today's event. Y.Laprevotte set his best laptime late in qualifying in order to take his 4th pole position in RTFR. In race he never gave up the lead and converted his qualifying achievement into his 6th race win and became 5th driver to score more then 5 wins,it was also his 14th top5 finish. Another previous winner,P.Butcher,rallied from 8th position in start to runner up position in finish,setting his first ever fastest lap on the way,4th top5 finish for him,Pik_d finished 3rd,repeating his best achievements in both qualifying and race,finishing in top5 also in his 3rd race here. After more then 50 races absence,Troy returned in RTFR with a 4th place finish today,9th top5 finish in his stats,but 2nd best LFS hotlapper S.Litmanen finally scored his first top5 finish in RTFR with 5th try by rounding up the list of today's best 5 finishers.
Since 101st RTFR the rating points system has been slightly changed by adding conditions for extra points in case of higher attendance (hower with mouse pointer over green title of Rating sheet of stats spreadsheets for more info),a perfect event for one driver (pole position,win and fastest lap) with this attendance would pay out 21 points instead of usual 14,making this the "points richest" RTFR ever.
Will be hard to top the interest for today's combo,but in any case the next race will be held with some of the racing cars - check this thread in sunday before the next race for more info!
Eclipsed 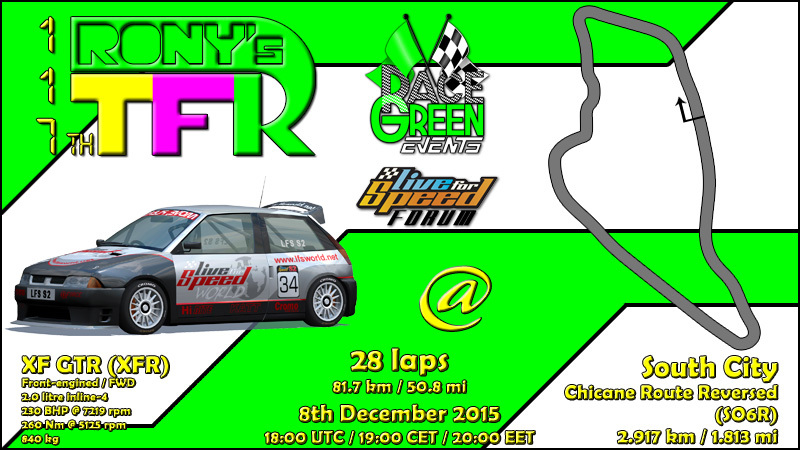 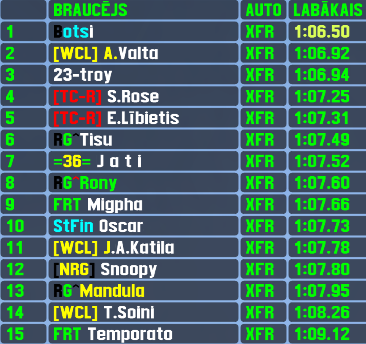 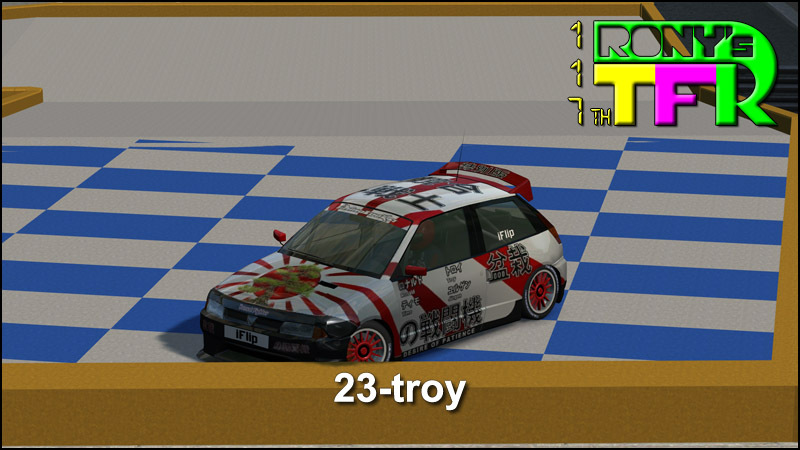 A new record has been set today - after 85 RTFR events break,Troy has won again a race,and it is already his 6th - he also joins the 6-time winners club as he is the 5th driver to have this amount of wins at this moment. Also Troy scored his 7th fastest lap of the race and 10th top5 finish out of 10 finishes. After scoring his first pole position in qualifying and leading first 12 laps of the race,Botsi had to concede to winners pace and finished 2nd today - it was his 5th top5 finish,but S.Rose,representing his new team here for the first time,repeated his best result for the 3rd time and finished 3rd,putting 4th top5 finish in his account. After hard battle Rony finished 4th,which is 53rd top5 finish for him,Migpha finished 5th,which is his 4th top5 finish.
After 3rd over-average-attended event in row,RTFR has left only one more race in this year - in 2 weeks a road car will await us for a spin,more details about that in weekend before it!
Eclipsed 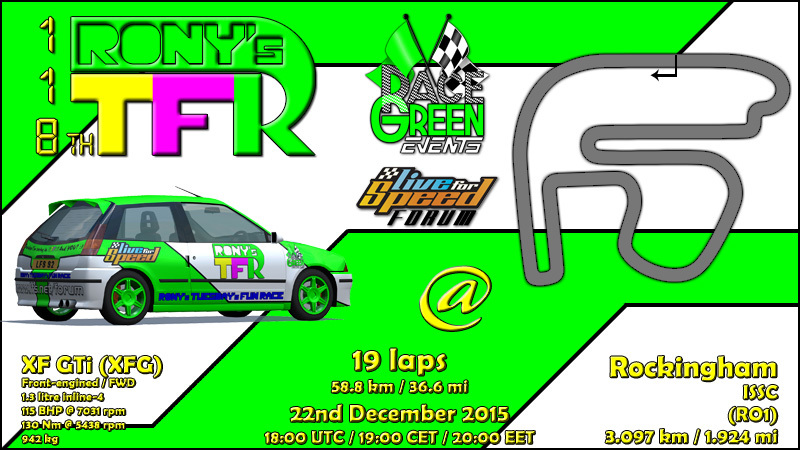 Saturday morning I was hardly thinking what track (car was already decided) to choose for the next event,since it's the last one of 2015,wanted something a bit more interesting,something new,but still not too experimental,at the evening LFS developers took this problem away by releasing the Rockingham environment. So for the second time in row RTFR features XFG race at previously undriven racetrack!

Nais! Can drive this on mouse and not suck entirely!
MandulAA

Great choice, Ill try to be there!
TypeRacing

This was probably highlight of the race for me. Almost as good as last time.

Well i dun fook'd up a few times, so apologies to those involved, should've at least waited for you.

Got upset by some very optimistic divebombs though, mostly by finnish and jamaican competitors. Shame, otherwise it would be a bit better race.
MandulAA

Exported my twitch stream to YouTube, check it out here: 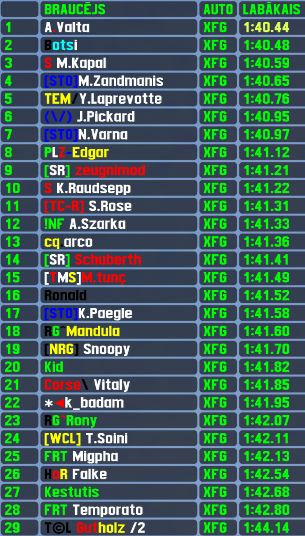 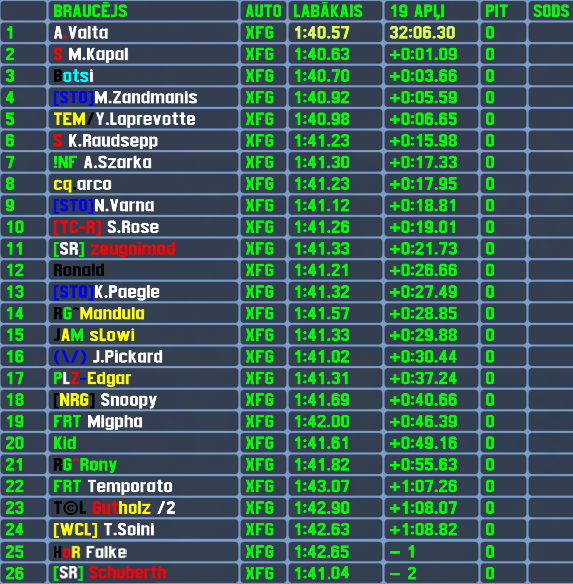 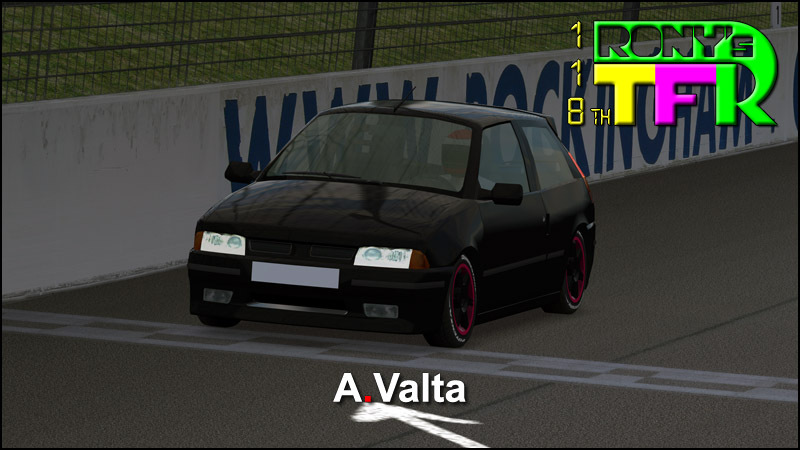 The S3 era of LFS has been opened also in RTFR and there was quite big interest into first sanctioned racing event at the "new" Rockingham track. Best from all was without doubt A.Valta,as he was the fastest in both sessions and led all 19 laps,scoring his 4th win,5th pole position and 5th fastest lap of the race,also finishing in top5 for the 7th time. Despite starting from 2nd row,M.Kapal was the closest challenger in race (14th closest finish of RTFR),but never found a way past race leader,so he had to settle for 2nd position,24th top5 finish for him,6th top5 finish in Botsi's count with yesterday's 3rd place finish. 4th in final results was M.Zandmanis,which is his 9th top5 finish,but top5 was closed up by highest rated driver between today's participants - Y.Laprevotte,who scored his 15th top5.

On a side note - there were few negative aspects during yesterday's race. While driving deeper towards rear end of field,I noticed way too many contacts between racers ahead. It's understandable,that the barely 12 meters wide track is not enough for all to fit in within 50 meters track lenght while driving with race speed,this means more caution should be taken when racing in rather large field and everyone should try to avoid any contacts as much as possible. Also few drivers misused the liberty of chatting too much - Race Green Events normally does not forbit chatting,but a lot of useless binds pressing or discussing every single detail while in race is really distracting for those,who does not want to block messages and leave them on for some casual communication (like "sorry for hit","good pass" or similar). Especially this won't be tolerated from retired drivers,who wants to play commentators - such actions will force me to kick or even ban those keyboard happy spectators. So please keep the chatting to minimum,as I don't want to go nazi way and award every chat line with penalty!

With this race RTFR has completed the racing of year 2015 - we had a total of 24 races in this year,visiting all LFS environments,using all LFS cars,where total race distance was just over 1800 kilometers (co-incidentally it's also the distance between my current living place to home town

). Average attendance was 13 drivers per event (ranging from 5 to 40 uring different events),which might not be a big number,but sometimes you don't need to finish ahead of 30 others to have fun from racing,right? Also we have 4 newcomers to RTFR winners club,which is now extended to 44 members.

- we will resume normal racing in 3rd january with 2nd round of AWS,while the next RTFR will be 2 days after that. But for those,who want to let off some steam and jump into contactful car conflicts - we offer the traditional x-mas crashfest "This is Crashmaaas !!!" in 26th december!

Merry Christmas to best post-race stat nerd in the game