At least one can overtake.

well, as long as i get pole

> When Bernie forgets to put an escape road
k_badam

I don't, I predict no overtaking
UnknownMaster21

Not bad, I got spun at T1 and fought back from 19th to 6th despite being 16 seconds behind everybody. Was fun.
Eclipsed 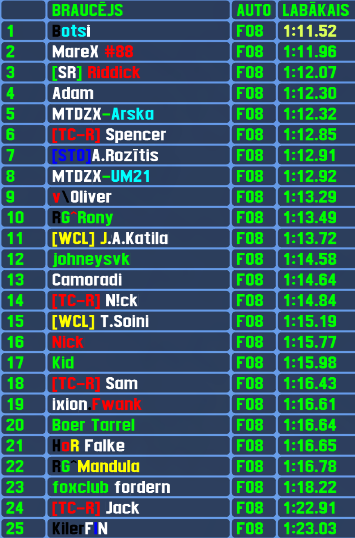 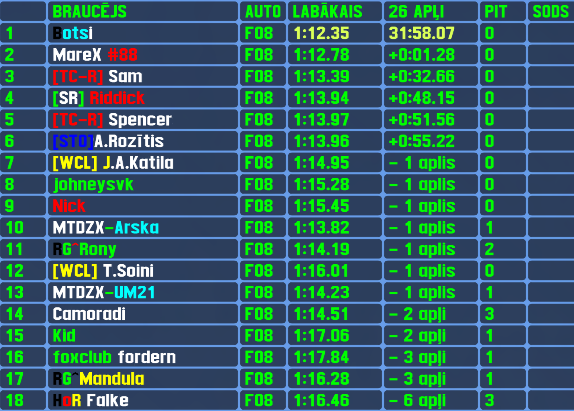 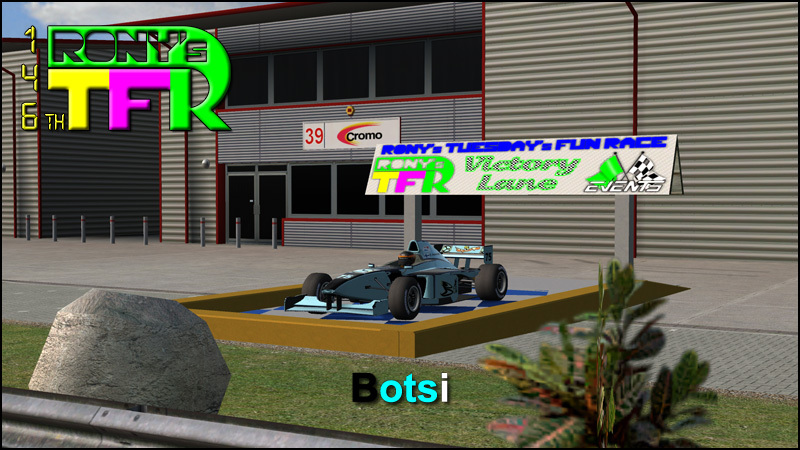 The new Blackwood has been welcome in slightly different way then new Westhill and Rockingham - this time no XFG race and also no basic first configuration,even more - organization went wild and created new custom track for a great challenge! The one who addapted best to variating track was Botsi - the finn is now the 12th driver with 5 or more wins,as he mastered the race yesterday,while also picking up his 4th pole position and fastest lap,13th top 5 finish for him. The best during prerace practice and defending winner Marex let the leader a bit away during the race,but was able to reduce gap and finish just over a second away,also collecting his 13th top5 finish,Sam was best of the rest with more then half minute gap and took 2nd podium finish in row by finishing 3rd,now he has 6 top5 finishes in his stats. 6th top5 finish goes into Riddick's account and he finished 4th yesterday,but top5 was closed by previous long time rating leader Spencer,who has now a total of 18 top5 finishes.

This race for some reason gave me a feeling of older top class single seater races,where there were few guys racing hard for top positions,some more in midfield,never able to reach win and some at the back of the grid trying to survive the hard race. Even venue was sort of appropriate - partially consisting of dangerous public roads. Some deffinitely were happy to race this,some less,but this is fun race,we'll try some a bit less standarty tracks. Usual 2 weeks break and then we will be up for next race,this time featuring one of the road cars,most likely in rather standart track,make sure you don't miss out the action!
Shikari_San

Was a fun race, went from 18th to 3rd (:
Botswanan Salama

I had exciting times with drivers being lapped. Really glad I managed to finish the race without any major incident after all that happened during the race.

The track was very challenging, and I liked it. It was my first proper race with FO8, so it took some time for me to learn throttle control. Hopefully I can prepare better for the next race
johneysvk

this was loads of fun, great combo. less carnage than i expected
11SuLLy11

next tuesday, it's every 2 weeks

Yes,just next week. To make sure,check the Leagues calendar - easy to schedule your racing for few weeks ahead! 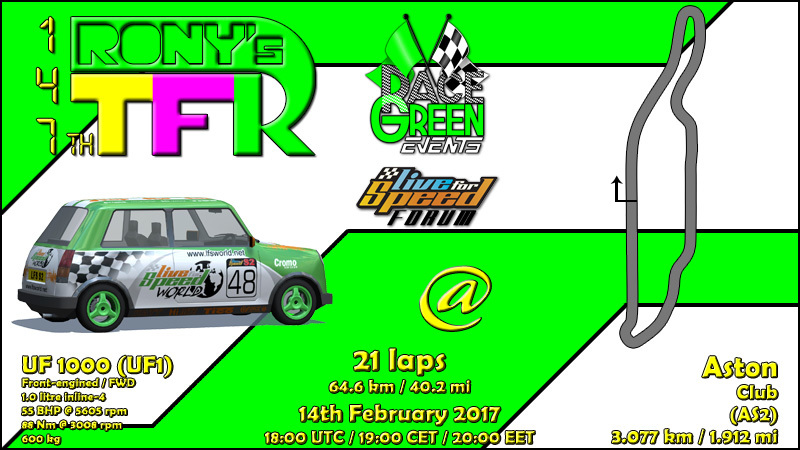 Server is up and running: Ronys Tuesdays Fun Race (feel free to spam the Airio top table with your laptimes)[/quote]
Jatimc 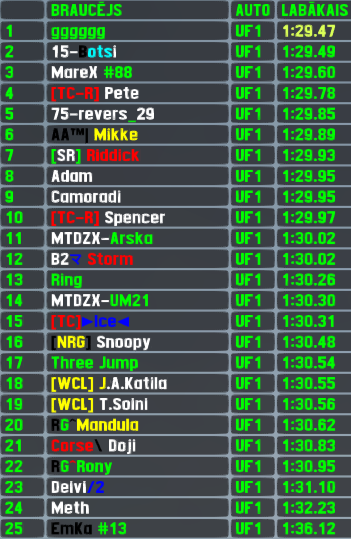 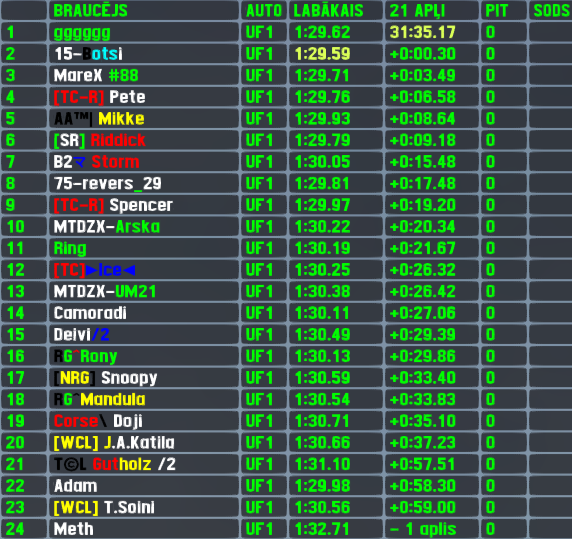 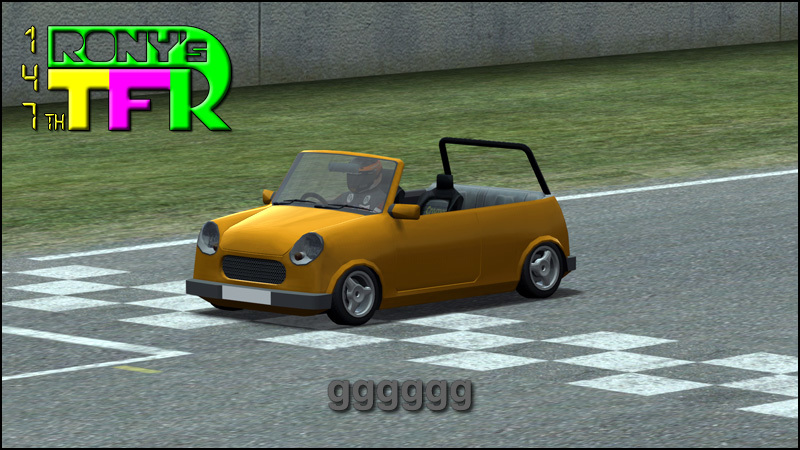 When winning 117th RTFR,Troy set a new record - 85 races between wins. Yesterday this record was beaten by the only pacific region and also only southern hemisphere RTFR winner! Driver named with 6 letters of "g" increased the longest break between wins to 99 by taking his 2nd RTFR win,which was also his 5th top5 finish,also he achieved his 2nd pole position. But fastest lap was taken by someone else - by 2nd place finisher Botsi,who finished less then 1/3 of a second behind winner,adding 5th fastest lap and 14th top5 finish to his stats. 3rd with 4th podium finish in row was Marex,who also scored his 14th top5 finish,4th was Pete,collecting his 19th top5 finish,but 5th place finisher Mikke was the only one in yesterday's top5,who did not finish in same position he started,he had to move up a position to get his 2nd top5 finish here.

In 2 weeks the normal RTFR will continue with some of the slick tyre cars,while already next week we will have the XL version with yesterday's 5th place finisher's chosen combo. Detailed info will be posted a bit later!
versis

Sad I couldn't take part again, but it's really good to see that RTFR still sports a really nice grid considering the competition of more recent sims. way to go!

hope I can join again next time.
Flame CZE