We are ready: Qualify is done and was as expected dominated by 'Last Lap Motorsports' very closely followed by '[TC] Racing & Friends' - the two top favorites to win the DoP 24 hours race this year.
'eXtrem Racing' has taken the third place in this 24h DoP Grid.
What a great success!

The last chance may be to move on from hibernation, to create or join a team and to take place in this DoP 2017 24hours grid.
This endurance race today at Westhill International is the last one before ..
yes, you know it


[TC] Racing is top favourite for the 24h Race! Last Monday at Westhill we have had one of our last testraces before the main event DoP 24h starts.
It was amazing to have a nearly full grid with these powerful GTRs.
And it was even greater for sharing these special LFS 24h Spirit with teams like HoR, extrem Racing, Absolute Beginners or many others and having fights with experienced racers like ‘Ring’, ‘Riddick’, ‘Mazdarati’ and many more. 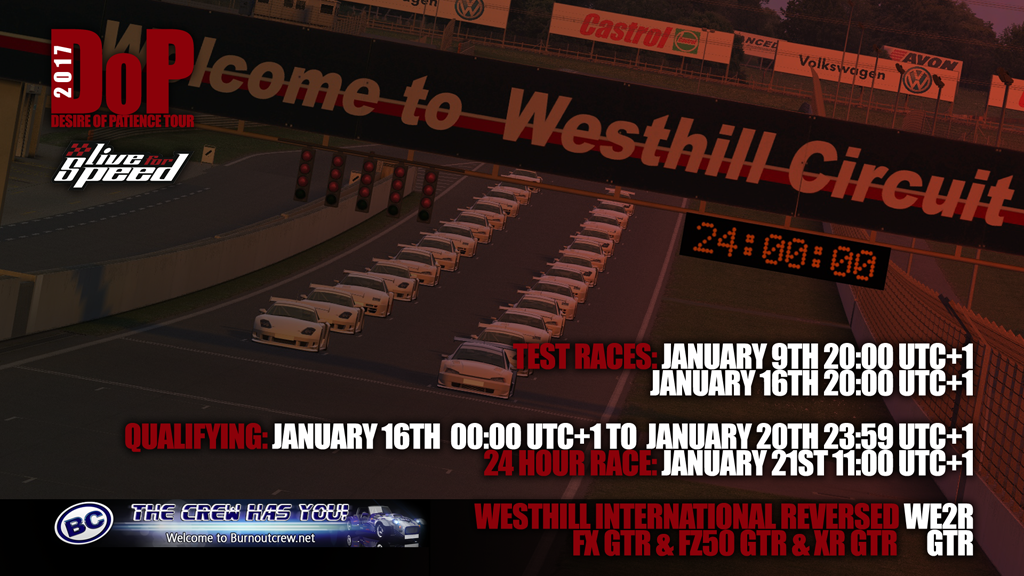 get ready, start your engines and feel this special 24h LFS racing spirit.
Welcome to Westhill and Fortune GTR! This is your chance for racing with us, compete with DoP GTR Drivers and decide afterwards for being part of the DoP 24h Grid.

There are still only a few days from today to next Monday.
The first challenge for you and your team to speed up skill, pace and team spirit starts

What is this championship all about?

Hands down for Thomas TP Poulsen, he is really a hotlaper and the champion of this years Hotlap Championship.
At second place we find Erik from Sweden, and at third place we find Elias Lundberg.
Good job every one, 2016 we got close to 100 piont takers and at least 300 drivers over all.
2017 will be a good year in LFS.

First we would like to wish you a Happy New Year!

Today we have made a change that will be helpful for many LFS racers.
Until now, everyone paid the same price for an LFS license. The league with "slippery road" sign logo is back for it's 6th season - and the traction rich cars will not be scared off from the very slippery schedule of the 2017 season.

The next January 10 begins in Virtual GP a new season, the Formula BMW championship '17.
You are invited to participate with us.
All information in Virtual GP

Merry Christmas and a happy new year.
But don't forget to get ready for one of the most historic virtual racing events - the 24h DoP.

On Tuesday 27th December, we're hosting a 55 lap race at Aston Club (AS2) with the Formula BMW (FBM)
The race will require a pit stop, though no work needs to be done, qualifying will be single lap call out.
Interested? Please see the Event Thread. On Tuesday 13th December, we're hosting a 44 lap race at South City Chicane Route (SO6) with the XF GTI and XR GT with 1% (XFG and XRG+1%)
There will be 15 minutes of free qualifying.
Interested? Please see the event thread. New Dimension Racing are pleased to announce a revival weekend for the iCON Touring Car Championship, to be held at Westhill National (WE1) on Sunday, 11th December 2016.


The iCON Touring Car Championship (iTCC) was created in December 2008 by iCON Racing members Joe Keaveney, Darren Taylor, and Tom Madl.
A test race was held on 21 December 2008 with action-packed races, which carried over for all three seasons held.

On Wednesday 7th December, we're hosting a 23 lap race with at Aston Grand Touring (AS6) the Formula XR (FOX)
There will be 15 minutes of hardcore qualifying (no shift+p/s allowed)
Interested? Please see the event thread. 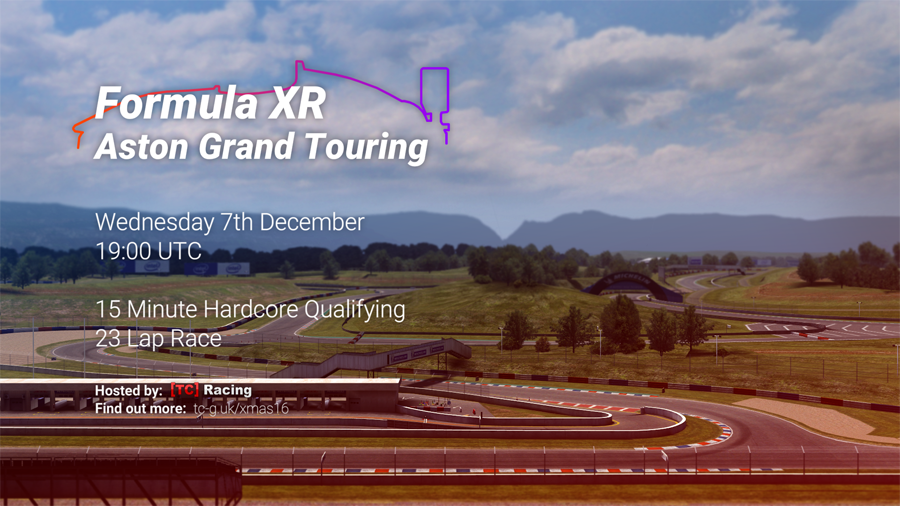 The next November 22 begins in Virtual GP a new season, the MRT Cup '16
You are invited to participate with us.