" We made the decision to release it now rather than waiting for the other content to be completed."

Lol, oh ya completed? Like what? Tire models and stuff? I'm not joining the third season of those shenanigans & you should be extremely blessed that people do put up with it.

In retrospect I purchased this game back in the day for roughly 45 CAD and that was an EXTREMELY pricey move & most of the purchasing motive was under the impression that the game had a cool crew and some neat things coming/put in the works but really all it did was flourish into nothing more then a subpar sim at the end of its life.

I bought the Nordschleife for AC for around 10$ last march when it came out. After 48 hours with Rockingham I believe I have now driven more hours (mostly offline) into it than the laser-scanned Green Hell. AC is looking great, the general physics are very well done and the AI is not as bad as some people say but for many, the fun factor that LFS provide makes a new track with 11 layouts worth 12 pounds easily especially if more is to come.

A sim at the end of it's life as you say wouldn't offer any support anymore and would make place for an upcoming game based on promises and fireworks à-la-EA, the exact opposite state of what LFS is today.


The only footnote in this release in my opinion is that Scavier are too cautious, by saying that they can't promise any more content which might, for sure, scare many users for the moment because they feel that a track alone is on sale for 12 pounds. Being the devs, I would gladly show screenshots of upcoming S3 tracks/cars even if they are a full year away by saying: This is a work in progress of what will be added in time. This would of course, lead to an unlimited number of threads from the Sciroccans and start another dark age of negativity all over again so I guess that explains the lack of information on upcoming contents, which is sad because most people understand that it takes time to make quality stuffs.
marlon99rocks

s3 will be my this afternoon
Pasci

Aaah... Thanks for your explanation, now it's clear.
Xenix74

Progress report! Come on Scawen, as someone mentioned earlier, it would not matter if the content is a year away from being released.

When will dcom commands /ro10 and /ro11 be fixed?
pako_customize

but but what happens with new physics?
Flame CZE

I suppose when he gets back to work and there's a new test patch ready or something,probably after holidays...
pako_customize

The tyre physics will be a free update for all LFS users, while S3 is a content pack (new tracks & cars).
pako_customize

tryed but looks too different to the old shine, u can make a new patch for disable the reflections? ingame reflections settings doesnt work and i tryed what u say but only allows me to use 4096 of max highlight and in brightness i put 0 and nothing happen, i miss old car shine :S
MousemanLV

Random dudes with cameras.
We have given out camcorders to randomly selected people at the track. The idea is to see what the race looks like from their view. 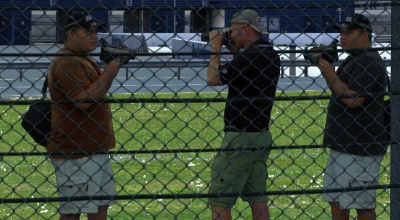 It turns out most of them were busy filming each other and taking selfies. But here is perspective from marshal post #19

I love how whole track is one continous areal, without visible areas of empty nothing.

One can follow cars around the whole track.
https://youtu.be/ksvi2jYOuo4
cargame.nl

I don't agree. Cruising is a big part of LFS nowadays, it helps to get Rockingham more popular if that parking lot is accessible/drivable and you would be able to drive from tunnel to tunnel.

Even for racing it would be cool to make a custom layout. I am sure that the dev team was/is disappointed that the (racing) community didn't take the full potential out of Westhill 2.0's capabilities but this is mainly due to uncertainties about the future of LFS and time investment. Now it looks like LFS is here to stay I think people (including myself) are willing to put a bit more creativity into it.

I have no idea but I guess it's not that extremely difficult to make that area drivable because it's mainly flat. Rockingham is a landmark for LFS, why not squeeze that little bit of extra out of it. *Unless the track license cannot make it possible.
MousemanLV

Got to test the new track recently, feels awesome. The track looks amazing and the amount of configurations available is also great.
Awesome work, keep it up!
MandulAA

We had a race on Rockingham ISSC with XFG as part of the 118th RTFR and it was awesome. So much fun and challenge even with slower cars. Well done.
englishlord

Dunno about that, Absolute Beginner's league had a 6 round cup of custom tracks using the outer Westhill environment http://www.absolute-beginners.nl/news.php?item.786.10 I've seen it being used in quite a few other places. Personally, I thought it was great. I know people keep saying to allow mods but the whole thing of adding custom objects into existing environments to create new places to race/drive has always been a much easier way of going on. I also haven't seen other racing games offering the ability to be able to customise environments the way LFS can be (correct me on that if I am wrong).
cargame.nl

Thats why it are other racing games

My question is the host of 0.6K version goes more lag the host 0.6J?

Since in 0.6K up to host gives lag: s
cargame.nl

Netcode didn't change. It's quite superior already (although I wonder if more pps provides better polishing)

You probably connect to the other part of the world, this causes lag. No patch can fix this.
MiniVan

How dope would it be if the Scirocco and tire physics came out for christmas? Not saying it will happen, but S3 coming out gives me big hopes and excitement for the future of LFS.
ShannonN