Franck Montagny, ex F1 & IndyCar & 24 heures du Mans driver, actually Formula E driver, working as consultant for Canal+ TV network and friend of Jules Bianchi said he has seen the scene of the accident: "It seems the car has slid and stopped on an impact at the helmet level".
CodeLyoko1

where did you read that?
Stig209

First I actually thought that the tractor was broken and that's why Sutil's car stayed there.

In some images it looks like car's back is badly crushed and front looks better. Hope he's OK.
Last edited by Jesse Kyytinen, Sun, 5 Oct 2014 09:45.
Lotesdelere

Montagny said it live on Canal+ TV which is broadcasting the F1 season in France this year.

It has also been reported on some sites since then (french language):
http://www.eurosport.fr/formule-1/grand-prix-du-japon/2014/grand-prix-du-japon-2014-lewis-hamilton-mercedes-vainqueur-jules-bianchi-marussia-accidente_sto4427364/story.shtml
Jesse Kyytinen

Everywhere it has looked like car hit the tractor sideways but Mika Salo has said it went straight nose first under it.
http://www.iltasanomat.fi/formula1/art-1288747042264.html (Finnish)
In that image the front of car doesn't look like it's damaged, not a good sign. I've seen a pic in a different angle which clearly shows that Bianchi's roll hoop completely gone from the impact like the pic above but I won't link to the pic here. This is definitely not good.
Last edited by speed1230, Sun, 5 Oct 2014 12:46.
Seb66

It's likely that large sections of the car, around the cockpit (nose, sides, airbox if possible), were removed to get him out safely. It seems that at least jaws of life were used, for one.
speed1230

L'Equipe reporting that Jules' operation has been completed and is able to breath without aid
http://www.lequipe.fr/info-continue/bianchi/97363
ChristijaNL

If it was head on the 2014 nose probably made it worse. Did the team not communicate yellow flags in that zone?
NotAnIllusion

I believe the drivers have lights on their steering wheel that advise them of yellow or blue flags.
Funnybear

I've literally just watched the BBC coverage. Nothing. Absolutley nothing was mentioned untill you can blatently tell that SKY had got the footage and the reporting already in the bag. The FIA footage shows cuts, and editing whilst the Beeb comentators where floundering around looking for something to say. Coultard knew something was up, and he knew it was serious. Shameful broadcasting from the FIA and from SKY. The Beeb editors should have just gone with it, never mind legal, some major shit just went down. That race should never have been run. We already know what has happened with Shoe, Senna et al with major head injury's. Media contracts just make a complete mockery and sensationalise a sport we all feel very passionate about. That's it for me and F1. This year has been a bag of shite and this Suzuka just puts the whole thing into perspective. Hope the poor man is ok, those JCB's are built rock solid at the back. That's where all the counter balance wieght is, and by the look of some of those photo's you can see exactly where the Marussia hit and you can only imagine how Bianci's head played a role in that. Nasty, nasty stuff.
Hyperactive

It is probably time to start thinking about putting skirts on the tractors that need to go on track during the race.
troy

Nothing was cut, you couldn't see the Marussia car because of the camera angle, SKY was in the dark just as much as BBC was. There is footage apparently but it was never shown on TV and not released afterwards. It only got clear something serious must have happened when they kept showing the Sauber standing around and Marussia team members looking worried, news slowly started to trickle down after the SC/Medical Car was out.
Hyperactive

I simply assumed there was some kind of accident with the tractor and some track marshall. Only when that accident scene was shown with bianchi's name on the screen it dawned to me there could be another car there. And you could see sutil standing there which also indicated sutil was not the person who was injured.
Cornys 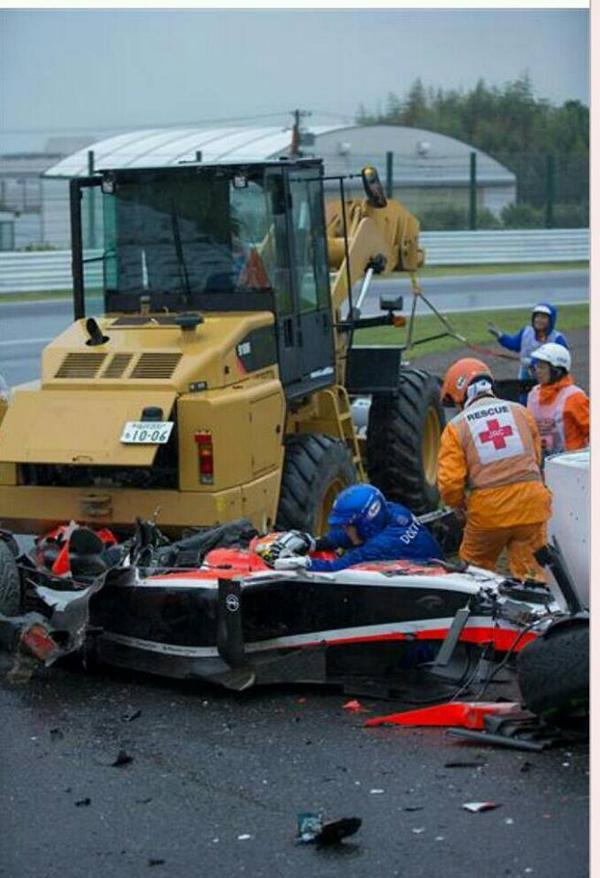 What a race, and what a sad way to conclude it. For now our thoughts should be concerned with Bianchi's health.
Last edited by Cornys, Sun, 5 Oct 2014 22:44.
chanoman315

how there's not a scratch on the tractor
tristancliffe

There is. There are photos of the tractor later in the evening, and is scratched and a tyre has been pulled off its bead.
Töki (HUN) 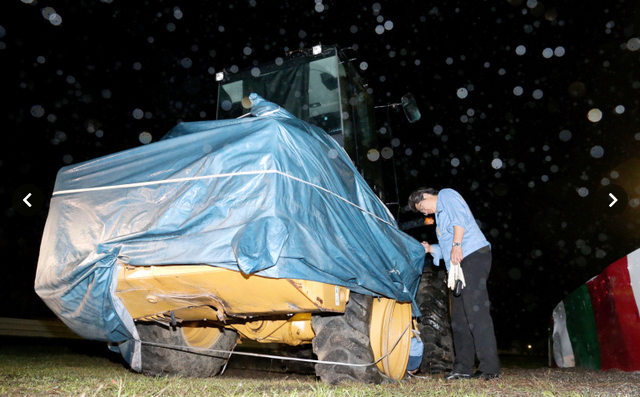 That's more like time to send the safety car out as soon as some rescue staff and/or stuff is operating within the bounds of the track and its run-off areas.

Apart drom that, Prof. Gérard Saillant, a famous surgeon who is actually President of the "Institut du cerveau et de la moelle épinière" (Brain and Spinal cord Institute), and who cured people like Ronaldo, Dan Carter and Michael Schumacher among other ones, is actually flying to Japan with Jules Bianchi's family.
I wonder if it's some good news.