He already tested removing the stripe in Photoshop. Do you see any guide holes in his photoshopped image?

did you try to get 4rse for the numberplate?
R3DMAN

no its the original numberplate that came with the car
XCNuse

Nope, they don't it's just stuck on with that 3M automotive molding tape (same stuff i have on my eyelids, that stuff is CRAZY strong!)

Biggest problem i've seen is one person on the MZ3 forum took his side moldings off and there was about a half inch spot where the car was bare metal, no paint at all!

After seeing that, I might paint my wheels black now...


@mrodgers lol yep! maybe I'll have to go in there and drill some holes around the car with photoshop .. make it more 'realistic' haha, but yea there's nothing there.

Unfortunately I wanted to debadge my rear completely, but the big flying M and mazda have holes in them and I don't want to get those filled in and have to repaint the whole back end.. I guess I can do that when I decide to repaint the whole car to factory spec when I get the body styling parts I want on it (GV lip, GV grill, and Speed3 spoiler)
Bawbag

Not really my car, but i've helped on the project

My mate got this car about 8 months ago, it got a lot of work done to get it through an MOT, my other mate is a painted so he fixed all the crappy bodywork and painted it, used to be such a heap, but it's cool as now, though it's a long way from finished.

got any rough guesses on how many hp those stripes add?
Scrabby

Depends on thick- and widness. If they are thick and wide u will have allot more air resistance than slim and small. The aerodynamic aspect on these play a huge roll on the downforce of the car.
XCNuse

Or how about a powdercoat with white

I think I like the white more imo.. I'll have to do more shots.

edit - oups sorry about original shot, forgot to get rid of the white reflector thing it looks like! sorry already closed out :/
sgt.flippy

Keep them stock imo. Spray them black, and you will get horrible bright silver marks on them if you scratch them.
Bawbag

He'll probarly will join somehting like that when it's done, he doesn't have his licence atm (He lost it a couple of years ago :shy

so the car being finished is his motivation to get a licence and get facking going.

As for the Mazda, white wheels ftw, looks awesome.

He should sign up now, have a nice progress thread on what's going on. Always fun to look back at when it's done

Nice one CobraDrifter !
What's the model ?

Thanks, glad you enjoy the car..
Haven´t any newer vids of it...

Travelling down the seaside in convoy and approached a wet bend - we all slowed, the guy in front in a Clio was fine, my car understeered a little (which was odd as I was only going 25...) and the white Fiesta ended up oversteering. He over-corrected to avoid an oncoming car and ended up driving through a hedge, over a mile-marker stone thing which broke his oil pump and landed in some guys drive.

Besides the obvious damage, the wheels now have mega uber toe, and even when it's in neutral the engine was still turning over as we rolled it back...

Quite glad we were on holiday though - **** knows how we'd of moved his car with the wheels seriously jammed without 5 or 6 people pushing.

Annoyingly, after we'd got everything sorted out, the car empty etc, I got in my car. It'd been sitting on the other site of the road on the grass with the hazards lights on and the bloody battery had drained to nothing :X
Bawbag

What's happened to that? Someone left it in out in acid rain.
Jakg 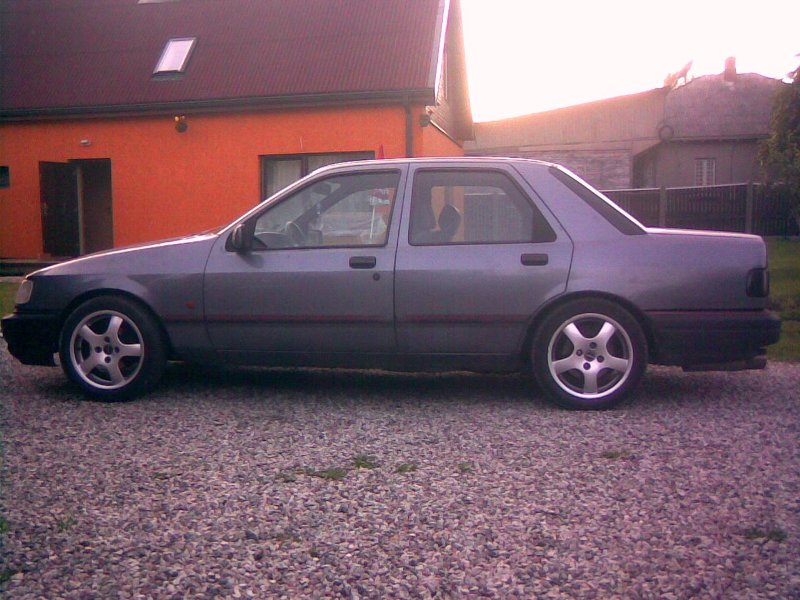 Either it's been a vandal attack or the owner was sick of the car and just got it done himself to claim it through the insurance, regardless, doesn't bother me.

I think we'll start prepping it at the weekend or next week, so hopefully it will be on the road in a couple of weeks.

Yesterday i had good fun in this: Its not my car, but that of my good friend Carsten (the guy on the last pic, S2 licence name Randall Raines, but he is hardly online, more a GTL guy)
He recently bought it together with his brother and his dad, imported from somewhere in the UK. It only got 135hp from a Rover K-series, but with just 500kg weight, its a bloody fast drive

I'm atm uploading a vid of our ride in it to youtube, but that takes another hour

In contrast this is my pimpwagon Began to fit fit the rollcage with my dad.

Here is the Super 7 Vid
Scrabby