Aww, neat feature, thanks for that!
Ibtasim6781

Daniel, I found a bug regarding the right indicator.

thanks for quick update!

Why is the consumption of fuel less?

I'm not sure, but I may have found a bug.

There's no option to change the position of the scroll menu, right?
I changed Text Size for the car radar to 1,5m and it happened.

You mean that the scroll menu goes to the top right? When in Gadgets menu you can click and drag it like the other gadgets.
Happens to me often xdd. Ps: Image link is broken.
mihkel44

Car radar doesnt work, i dont know what i should do.
troy

I was always too lazy (ok bad pun) to get this but wanted a way to quickly check where I loose time so finally downloaded.

Now I've got a suggestion for the gadgets related to sector/best times:

Would it be possible to either do a standalone gadget or change the "time diff" to add some more options regarding what time it compares it's delta to?

I would really like something similar in the way iRacing does this, you can quickly change the delta time to either use your all time or current session "best lap" "optimal lap" or "best sector".

Like this the data can stay useful even if you, for example, go from qualifying to full race fuel. Or you can quickly check in which sector you lose time not just regarding to your best lap but the best overall sector time.
Nilex

I thought about what you said and I agree it would be very useful. Here's my own expanded input on that:
- why not let the 'PB/Session toggle' affect all of these gadgets?
- toggled gadgets should be highlighted with different shade/color under session regime

They all relate and contribute to understanding of where you gain and lose time.
(BTW, there is a long standing BUG with "SPEED COMP" gadget in the screenshoot. More on that in my next post)

I spent some time thinking about 'under-the-hood' implementation of it but before that I think it's best to agree on criteria what is a "session". Would it be determined by qual/race restart, spec/pit, disconnecting, or maybe custom duration (set by user, eg. 24 hours)? It could have it's own command to reset it beforehand manually as well. "/o del sess" for example.
Each of the session info would have to be stored somewhere for the duration of the session. For example, the current PB gadgets info is stored (permanently) in ...\LFSLazy\SplitPredict (and maybe in ...\LFSLazy). So it becomes clear you can't have 6 types of sessions unless you find it acceptable to have 6 more subfolders and many more files. Lets just pick the best one? To me disconnecting criteria makes the most sense; custom (with reset option) after that.

If whichever gets done, the only thing I wouldn't like is another ...\SplitPredict file clutter. So I'd thought about making a hard limit to number of sessions stored. Following session would then overwrite the 1st one. And call the new subfolder ...\SessionPredict or something.

Since I'm not a programmer maybe there is a way to do it by including every type of session with unlimited storing potential, BUUUT without the file clutter. In that case go for it

Reporting a "SPEED COMP" gadget BUG mentioned in my previous post. And a couple of suggestions which tie-in to fixing the bug. Relates to updating relevant gadget values when making a new PB.

The BUG:
After the release of updated Blackwood, deleting existing LFSW (and Lazy) PBs, then making new ones some of the gadgets did not update properly. I'll explain using same screenshoot:

If you take the split speed from the small screenshoot + add 3.05 "SPEED COMP" difference... what you get is currently registered speed from old Blackwood PB (1st row larger screenshoot, taken shortly after the small one). This speed did not get reset after all I mentioned so far. It could affect all the other split speeds on other combos but I can't verify atm. 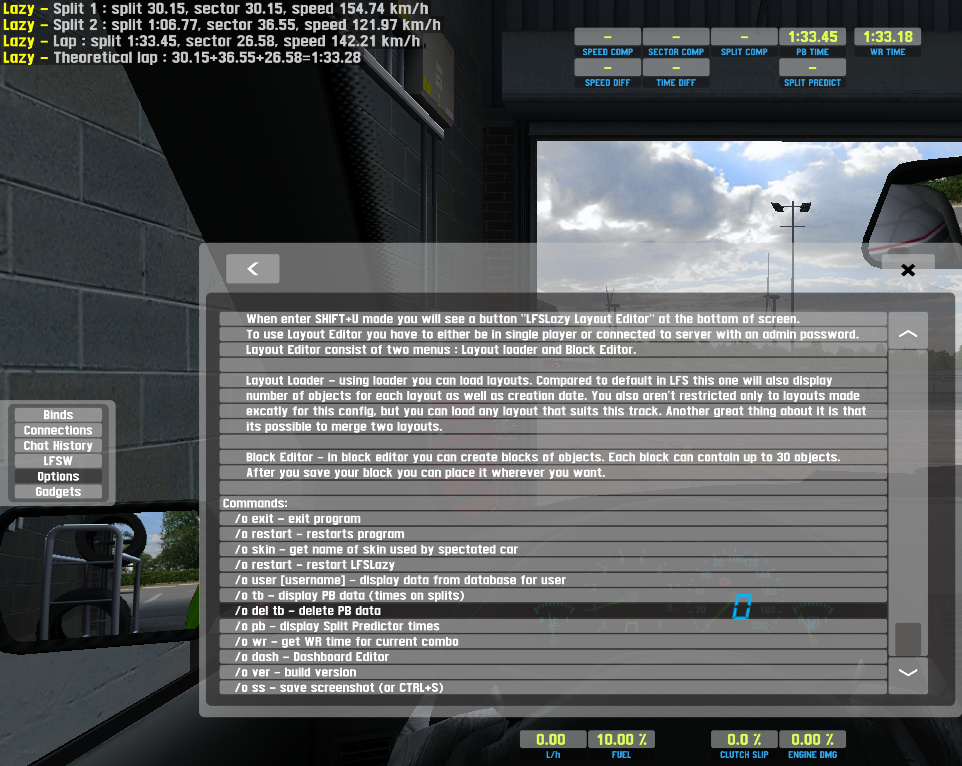 These are my long-lasting suggestions I never got around to write before. Please put them in order I mentioned, lol. It's slowly killin me how they are now...

Today I decided to find out what is this Lazy and installed it. I say WOW, this is magnificent add-in for LFS, really super! Thanks for the developer! And this is for free? Donations? I want to give 3£ LFS voucher to the developer.
Last edited by lucaf, Tue, 28 Feb 2017 13:47.
mihkel44

Does your car radar work ?
oleroc

I have a really weird situation with the UDP comms.. I have 2 sims in network connected to the same switch running against a LOCAL server, one is wireless, the other is cabled. On the wireless one, I have no problem, but on the other with cabled network, I get message "UDP packets arent't comming, check your firewall" on player list, and no radar.
The two PC's are clones, so everything is identical, and firewall is turned off. I have run Portqry, and get Listening on port 30000 when I ping it.

Where does Lazy collect this UDP packets? From the LFS server? How can the UDP packets reach the wirelessly connected computer and not the wired one, when the 2 are absolutely identical except for the network card?

Would really appreciate any input... I am stumped....

EDIT: I am getting the same "UDP Packets aren't comming..." in single player also... go figure....

Anybody using Lazy's Layout Editor? I try to save a selection of blocks - but the saved selection does not appear in the list. I tried with several different objects, very simple, for example two Armcos - no result.
johneysvk