Every patch stop RevBouncer from working, this happens every time. The author only updates it after a major patch, not these mini ones.
R0ut66

I have a suggestion, the pitstops could work only on one elevation, because you can be pitted on the roof of a house (example) if the pit is on downstairs
cargame.nl

It's a memory hack, every update changes the memory usage pattern. It would be much more complicated to hack if memory usage gets randomized on every LFS init (I guess).
UnknownMaster21

Just noticed, you can see trees in KY track which are behind the stand 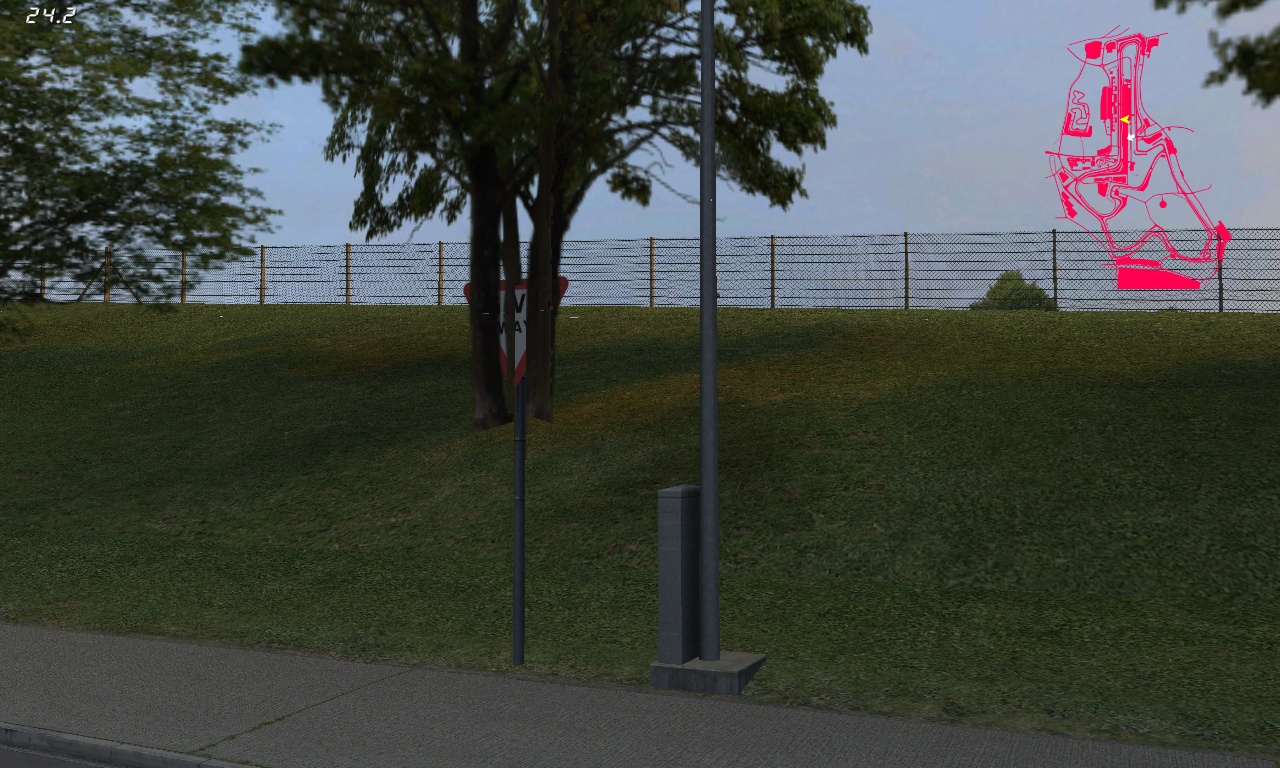 I hope and someday you can, Live For Speed has a lot of future, it is a great simulator since I have seen many simulators but none met my expectations, most are simulators with closed circuits, what I like most are the tracks with free driving as Whesthill!

I hope they continue to add more tracks like that, freestyle like cities, what is most striking is the Cruise, driving freely in the city as in real life...

Sorry for my bad english

@Scawen - It seems that the track map wont rotate now. The option is still there but multiple people have confirmed that it does not rotate for them.
nacim

However, now that it's as much detailed, I'd like to see an option to make it zoomed (seeing only the 200m and dezooming when speed increases) or totally visible (as it is now).

I deliberately avoided the rotation of the open config map. The individual race track maps do still rotate if the option is selected, and I can see that may be helpful if you want to see the corners ahead of you. But having the open map rotating is quite undesirable and confusing so I thought it would be better not to allow it. Also, without rotation, the map can be made to fit exactly into the available part of the screen. If it was allowed to rotate, some parts might go off the screen or over some text.
mbutcher

A lot of people, especially those in the cruise community, still use map rotation. Since there is still the option to enable/disable map rotation, would it hurt to leave the option available for open configs?
k_badam

Also, couldn't you make the map go behind the text, if you mean the lap times and position etc.
Scawen

I'm interested to hear a description of why anyone would want the map rotating. Otherwise I'd just be deliberately coding a mistake.
pik_d

People cruising like to be able to glance up to see if people are coming toward them, or at cross streets. Generally people (cruisers) have used it for ages and are just used to it, and like it.
borja_s13

We at cruise servers, use the map for search other cars, and for check if someone is coming into us in the other direction. If map is rotation-able, it's more easy to find your car and if someone is near you.

As said above, having the option for have this OFF, you should activate this options for those ones who are interested on this tool

Obviously, if it really looks dodgy when the new open-config maps rotate, I appreciate your decision to not rotate it. But when it has already been an option in the game for 15 years, a lot of people will have got used to it and will expect it to be an option going forward.

I personally do not use a rotating map but I know that many people in the cruising community use it for the reasons pik_d has just highlighted.

When I used to cruise, I used the rotating map because I was more easily able to discern what the traffic was doing around me, at junctions, roundabouts and just generally on regular roads.
jujek

I also don't use rotating map but removing that option will be not nice or any other option becouse people what play LFS do this for very long time so when we lost some option for e.g. map rotation people will be not happy with it so please don't remove any options what we already have.
k_badam

I am fine with removing the options we already have but only if very little use them, as Scawen have discovered here, people use the rotating track map. I can understand why Scawen didn't know as he has probably never been to a cruise server.
NeOn_sp

I don´t play on cruise servers, but yesterday we had our first 2017 league race in cesav. It was Open Config Track and It was a nightmare trying to check where I was and If there were someone joining track after his pit-stop without map rotation ( I always play with map rotation turned on ).

New open config maps are big, so the solution might be an on/off button zoom switch. Just a loose thought.

edit: to precise, zoom in could switch rotation on, like in GTA

I have been to cruise servers! It's important to know what people get up to in LFS!

But I do look at maps a lot, specially these days for cycling routes, and I never rotate the map around, because it would be confusing!

However the small zoomed in map (breadcrumb trail) on my Garmin is rotated to my direction and that is helpful.


OK, I'm only quoting yours but also read the others. I'll try it out.

Only thing is, I think with rotation switched off I'll be able to get the map squeezed up nicely on the right side of the screen (better than it is now - it's unfinished). With rotation, it'll need to be out about where is is now, and there could be a bit of overlap. So I'll code for two different positions of the centre point, making best use of space when the map is not rotating.

We'll see how that goes. I expect to be able to work on that tomorrow.
kristofferandersen

Moderator
S3 licensed
Joined : Sat, 25 Sep 2010 15:41
Posts : 592
Online at :
[RC] Reality Cruise 2
I agree with that, one of the reasons I don't rotate the map at all. Confusing.
If there's just a small amount of players using rotation still, I'd say just squeeze it to a corner and remove the rotation feature.
chucknorris

A slider for a map scale factor would be nice as well, like for the message text size. If it's not too much trouble.

Edit:
On second thought, it would be even better to have two sliders

One to set the size of the drawn image on the screen and another one to control the clipping. I mean to show only the part of the track that is close to you. That would be useful either way, whether it's rotating or not.
Last edited by chucknorris, Wed, 18 Jan 2017 09:49.
loopingz

When using maps and flying it is very usual to rotate the maps, but that is not lfs related.

Anyway I would really enjoy to allow custom map on top or replacing the existing one for special layout. These maps already exists for main special layout and it would avoid casual racer to get lost too much.
rockclan

I was about to sugggest to use a code similar to the Mirror codes, where you can either choose a fixed position(right corner as you suggested) or, for the map, rotating, but then you can slide it to what ever position,left and right, as you (the player) likes? But within the screen border?
123456789
10
1112
This thread is closed