You can look at the picture. It says nothing but that. 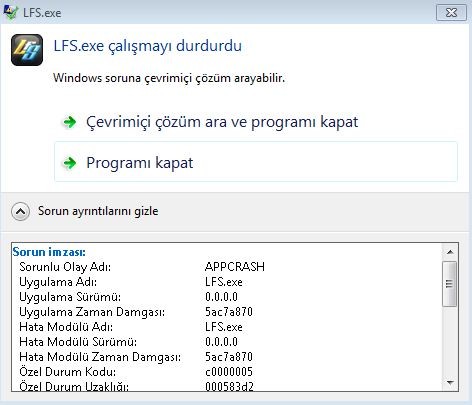 To bad we couldn't test if bullet proof today

Anyway, I'm reloading LFS. I'm not going to use this patch..
Degats

It was also reported here
Scawen

I think that is because of the lighting information that was removed because of changes to modeller objects.

Today I've disabled some of those modeller object changes to allow me to disable the lighting removal but there are some issues I still need to solve.

Unfortunately the code now in the public version contains an early version of some of the graphical updates that was merged in. But then the graphical updates went so much further it has become something that can't be merged in at all and for the new graphics we will be releasing new versions of all the tracks and most of the textures.

For this current update I just need to try and backtrack a little so everything looks OK with the lighting mostly restored, in a small patch.
Scawen

Tnanks. I've made a note to add a more informative error message in the next test patch.
greg_slideways

Will I be able to update my host from lfs.net to test patch or only dedicated servers?
RC-Maus

Can download dcom.zip. If u host somewhere i'm sure u have some rights.
greg_slideways

I don't know specifically when, but when the official LFS update comes out. Skin downloads will be possible.
RC-Maus

From this morning it is now possible to use R9 on the LFS rented servers.
rosewood2

Small update: It turns out that some skins actually came through, while the rest gets rejected. (see screenshot)
Scawen

Thanks, please check here in a couple of hours - I'll try to post an R10 test that shows the actual error text so we can figure this out.
rediske

So now online activity is recovering back to normal it seems...
Just curious: Are those narrow minded people still trying to attack the master server?
FreeScirocco

Rule one in the book; do not give it attention
Scawen

I know there are more things to fix but I wanted to get this one out more quickly so we can solve the skin download issue that affects some people. Anyone else can also benefit from the restored lighting on objects.
nacim

Looks like you are using my shader pack. I just made a quick hotfix for version 0.6R10 that fixes this.

Oddly enough, now all of the skins are downloading correctly for me now.
Scawen

Don't think I changed anything but the error message!

Maybe the bug will come back.
Sobis

Let's rather hope that it doesn't come back. Ever.

Thank you for your hard and devoted work, Scawen! Oh those teasers you give us...
rosewood2

A second round of downloading skins later, turns out it didn't come back (not yet anyway)!
Scawen

Just tried it, works nicely, no more missing light textures. And skins downloads as they should for me.