A trip back to my old haunting ground LOL

jep...
thats not fordman...no greetings.
his acc. is hacked i think
Fordman

Oh I do apologise HA HA

I recognize a few names in here

You can add me on Steam if I'm ever around I'll join ya: XCNuse is the tag.
kars19

Very nice, btw that BMW is some rip or?
kars19

Yes it's a rip, but with very good physics, that's why you can't find it in AC or RD forums
troy

So which one is it then? I see plenty around, the Lukas update with 5 different versions?
Boris Lozac

I tend to avoid the rips, not even sure why.. feels wrong for some reason.
kars19

I think ac physics is made of lasors. Lots of bright red lasors.

I'm not sure if I understand your question. What is box style physics?
kars19

LFS appeared quite revolutionary with separate physics for each wheel (as mass body), calculating physics for each contact patch, later also different parts of suspension attached to car body CoG - so in fact such simplified mesh was calculated, later even every tire sector for tire temps (as you see in F9, F10 views of tires and suspension).
I think only RigsOfRogs went further in terms of car body simulation treating vehicle structure as a 3D mesh calculating forces on each node.

While SIMBIN, as was known to me, kept on tweaking one box simulation with car treated as one whole. Thus calculating all forces as result on rigid car body (represented by its CoG). You don't need to calculate wheel as rotating wheel with contact patch to calculate car movement - it can be just CoG and 4 sectors of contact with ground (for different surfaces) relative to CoG with simplified formulas for combo: wheel-suspension-bodymount as one object.

Thus LFS could be really accurate showing ie. each tire revs under different loads (so it is so prevaling among drift lovers), while SIMBIN sims were good in showing car body movement with wheels just mathematically (for graphics) put on ground level not in fact physicly calculated.

QUESTION is: does it only look like LFS or RBR (also with SIMBIN physics I think) or also feels like?
Last edited by AndRand, Sat, 7 Feb 2015 22:59.
AndRand

This is how SIMBIN sees a car (with forces as relative to CoG): 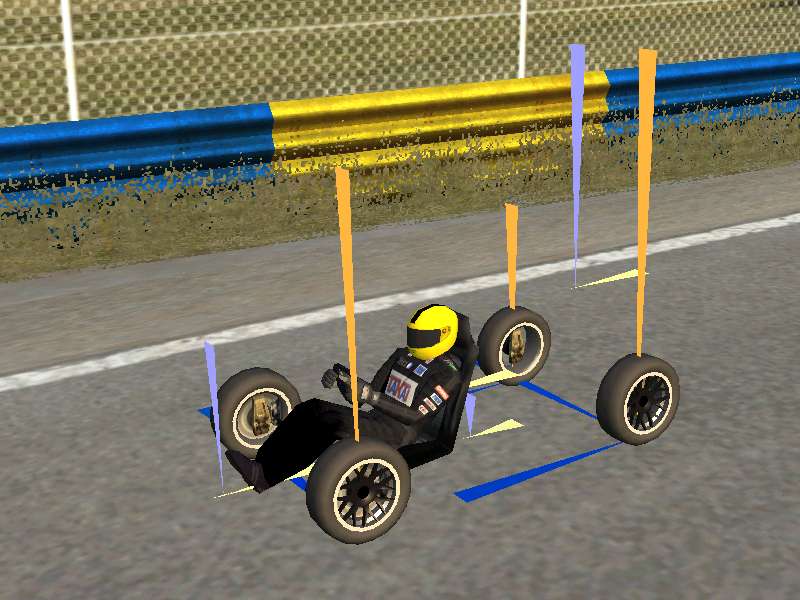 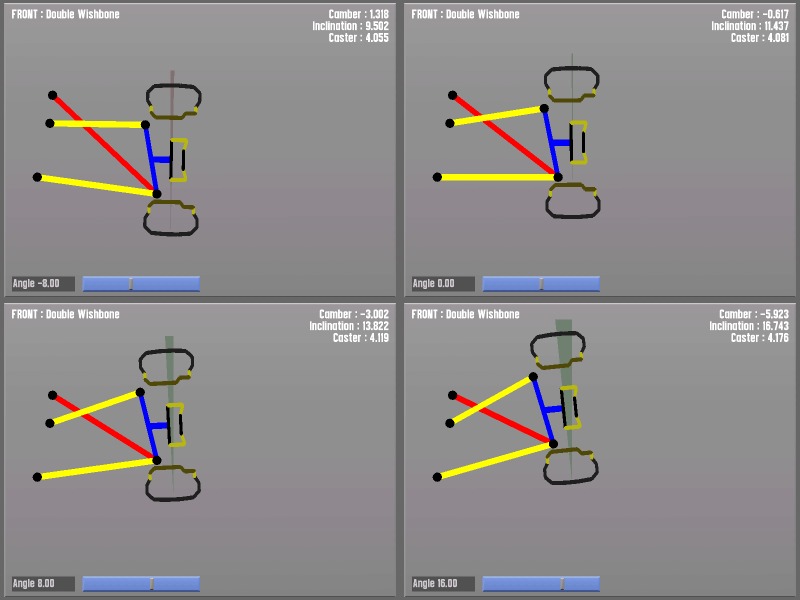 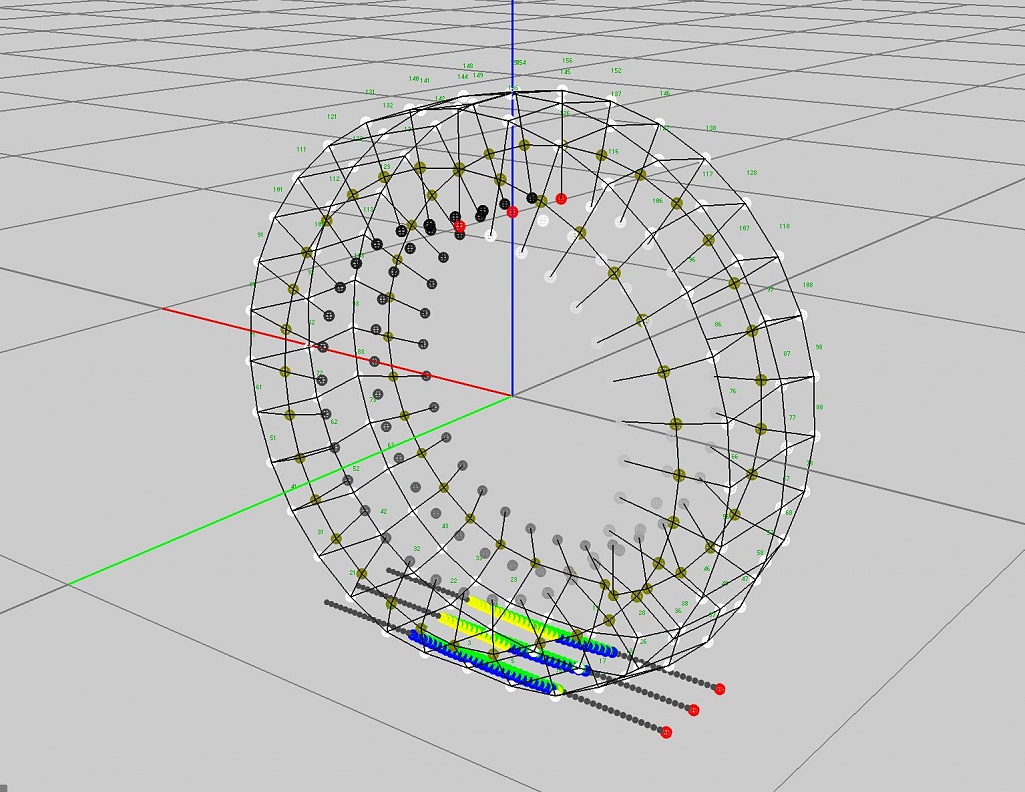 The name you're looking for is "ray casting wheel model".

And no, it's not box physics. Box physics is one single mass point with no separate forces from each wheel. It's sometimes referred to as "center pivot physics". With the exception of Mario Kart clones this approach has been dead for years. Even the most arcade car games use ray casting now.

NFS2 is a box physics title. Anything ISI is not.


The wheels in ISI sims have moment of inertia calculation linked correctly to the drive line components. It's no worse than LFS/AC in this regard and the angular velocity you see is not just a graphical representation. I know this is LFS forum and people do ISI bashing with a passion but some times it's going a bit too far.
Whiskey

LFS had tire flex while other sims didn't, and the force feedback was simulated instead of using canned effects, but I don't think that modern sims are lacking any of that, so now they are all (almost) even in the physics field.
Hyperactive

LFS had visual tire flex when others didn't. All car sims have had flex but not visual flex.

That box is just an illustration of how ac handles the car body inertias. Tires have their own weight and rotational inertias as well but it doesn't go as deep and complex as rf where you can have inertia values for all parts I think.

The problem with ac is that instead of allowing users to directly write the car body inertias in the files they use this strange box which is used to roughly describe the car dimensions for the inertia calculations. A box itself is easy to solve and convert into inertias but there is some kind of multiplier or set of multipliers that makes it really difficult to use the real inertia values if you have those.

This will be getting released today too:

It is not bashing - it is asking: when I buy AC will I go back to game like RACE07 or proper sim?

LFS is known for representing as separate objects all parts from tire contact patch to suspension mount (mounted to rigid body - that means CoG with given arm): tire elasticity, wheel inertia, spring/dumper units, wishbones, steering rods, antiroll bars.
The way to simplify is to make a combo object transferring forces from ground to car body. Of course the more parts are simulated - the better, becuase all have their operating angles and force transfer (especially seen with damage simulated - in AC I could see only wheels being jammed). So instead of results from simulation of one part being taken as inputs of another to give overall effect, the tweaking of such combo with parameters of each part is then "the state of the art" - simplified formulas for combo giving simplified results.
Last edited by AndRand, Sun, 8 Feb 2015 14:28.
Hyperactive

All modern physics engines can do very good job if you put in the correct numbers. As far as suspension design goes lfs is probably the least advanced of them all. I remember reading something about how lfs suspensions only work in 2d but I don't remember what was it exactly. I think lfs suspension supports stuff like antidives and kingpin offsets along with complex bumpsteers and caster changes so maybe I'm just imagining things.

As for box physics you can make 3 wheel cars in ac and it works pretty much without any issues. While ac doesn't support 3 wheeled cars and asymmetric suspensions it still allows asymmetric cars to be created as long as the suspension arms are identical on both sides. I'd imagine motorbikes is possible too although I don't know if the rotational inertia of the tires is modelled in ac. But we all remember nkbike

Yes, LFS suspension is only 2D.

If there's anything fancy with LFS's suspension, it supports beam axle.

Sorry for being harsh with my words.

For suspension, we're looking at rigid bodies with only one DoF per corner here, so combined or not they are effectively the same. Most of the forces will go straight though the rigid structure. The only difference is probably inertia handling on those suspension parts, which isn't much.

The elastic tire model in LFS was such a brilliant creation it made Pacejka-based everything else look obsolete. rF1 was way behind it in this aspect, but the rigid parts were more or less the same.

If one day we can have elastic drive line simulation, modeling each component separately would make a huge difference at least in theory.


Not sure about "only see wheels being jammed" in AC. The current implementation of damage in AC is so simple it's probably not acting on each separate component.
Last edited by Keling, Sun, 8 Feb 2015 15:17.
Hyperactive

The newest version of the jaguar is out: http://www10.zippyshare.com/v/rr2X4UBw/file.html
(new sounds, lods, improvements to 3d model, textures and physics)