There definitely won't be a backport of these features because the engine of AC simply doesn't support this. Anyways, I see ACC as a single-series proof-of-concept-product for an upcoming AC2. Which is great, because I dig the non-GT3 cars in AC and can use my investment* in AC a little longer, hoping that SimRacingSystem will continue to provide their wonderful service for AC also when ACC is complete.

*AC is one third of my total gaming investments, given that LFS, AC and Automobilista are the only games I bought in my whole life, I don't count nowadays virtually 0€ sims like GTR2 and RBR. Yes, you can call me a sim racing fan.
Keling

Well, there's no magic attached to an game engine that just somehow makes it support rain or D/N cycle. You code support into it if you need/want to.

D/N at least is relatively simple to do at a primitive level without lighting/shadowing getting too fancy. They might need to figure out how to update track object shadow maps in a manageable way for performance reasons though.

Rain is a very different problem as it involves significant physics changes. But if they could build that physics into ACC maybe they can run the same code for AC as well?
Last edited by Keling, Wed, 28 Feb 2018 14:31.
versis

While that's right, not sure where I read it, but I remember they stated it would be too much work changing the engine to support more than one light source. Can't remember that actually would cause the effort. With a small developer team I can understand their reasoning to try to move to an engine that already supports this.
troy

Kunos on the way forward for AC:

Hello. I'm pretty sure lot of people who use mouse don't know about this. In this way you can set up mouse in game like a steering wheel. So after this you can use clutch for mouse. Here is files and explanation how to do all this. Hope this will help 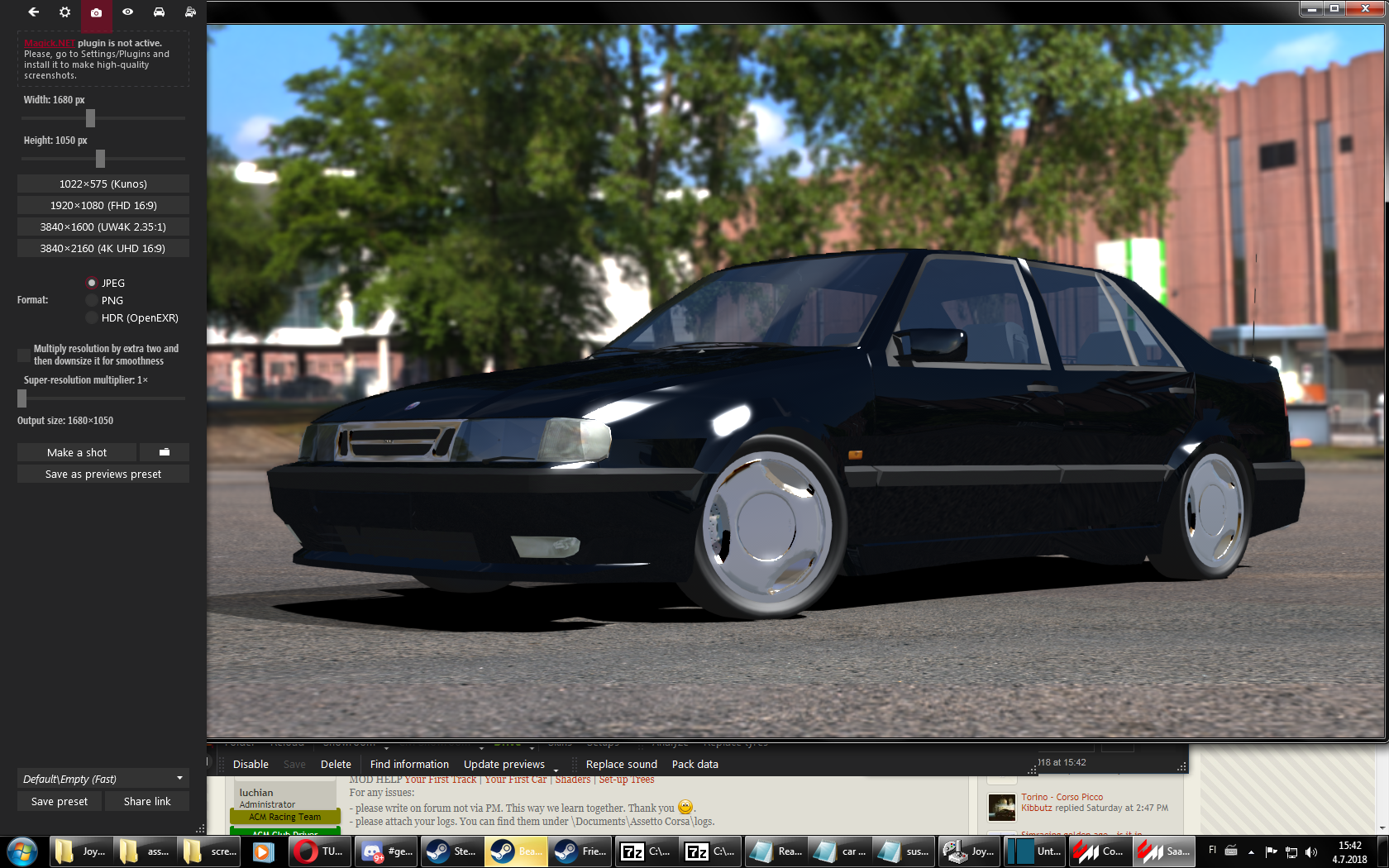 It has been said that AC wont get more updates, and this is the final stage it will have.
I think its a bit unfare, i paid 60€ for a game that does not have a decent chat client, a decent on the move settings manager (i like to mess with my ffb setting on the fly, and AC has a very detailed ffb manager), and i cant change the grafics settings on the fly.
These things should be there from the start, and they are never coming to it.
ACC will have a niche market, only gt2 cars, no drifters, or more interesting cars.
at this point Raceroom will be mutch better, they only develop competition cars, and they do it for many years, and it works well enouth.
sry for my english, i dont write mutch
Flotch

I think ACC is to only provide GT3 cars, so not even GT2 ...
AC is great, but is clearly disturbing me aswell on many aspects ... This is why I am still and will remain focused on LFS : developers may not be very quick to provide plenty of things compared to some other game companies, but in the end you get something at a very high quality level, speaking about how are implemented all the features. And this is priceless (and even cheaper than other simulations)
krakilin12

ACC is the first stage of whatever is to come from Kunos. Focusing on GT3 opened up resources for the UE4 adaption, if that is done and well worked in we may see other series and types of cars on this new platform. The Dev is open for anything, constantly scouting for clever heads and artists.

LFS on the other hand is proper niche, its only attractive to people with seriously outdated hardware, don't fool yourself. The good VR implementation may have fished in a few hundred new users but compared to the other current titles its just a spec of dust in the simracing world, one that people have fond memories of, sure.
Razor1373

Hello fellas
I know a lot of you play AC, so maybe someone drove the Porsche GT3 cup 2017 and have some setups or even advices to share? I've recently bought this sim and im starting in league next week, so setups would be helpful. Also how does weather affect setups? do i even have to make any changes?
Would appreciate some help, and if someone is intrested, here's link for that league:
https://www.republicofsimracers.com/

Unfortunately this is polish league, and everything is in polish, even communication on discord. Rules don't say anything about drivers from different countries tho

You can find my vJoy basic script on AC forum and elsewhere but most of the time anything related to AC hates everyone that creates something for AC that is too much for common people's brain, such as programming anything, modding, etc. always thinking it's cheating and so they delete it.
With AC making mods and being on AC forum = ban for almost everyone I know that does mods, because Kunos hates modders literally, making insults in PMs as seen here in this thread reported before but also even in public threads, then going and deleting any evidence, no reasons given for forum bans, nothing, they simply kill the modding community when ever they can. Most of the issues I've seen reported for AC by others and me... yeah guess what... first they deny it so that they please their sheeple followers, then next month they start silently rolling out patches to fix the bugs LOL.

The only thing that keeps AC alive is modding as it still lacks even basic features LFS has had for ages now, such as a sensible launcher+game executables, spectating, driver swapping, online web statistics, ...
Yet, Kunos tries it's best to kill modding for AC when they can.

In the PIE, FreePIE, vJoy, PPjoy thread on AC forum you should find my explanation of all the rubbish Kunos did when it comes to native mouse and keys support implemented in AC, it's freakin' unusable thanks to their enforced helpers that you cannot disable anywhere in any GUI or file, it's hardcoded in the executables for mouse+keys input, I also suspect some or similar helpers are hardcoded for xbox/gamepad input, hence why I call AC an Arcade Corsa often because LFS didn't have any of these rubbish helpers enforced, they could be disabled/enabled as desired and able to be detected by servers to kick anyone trying to use them even.

You have to use an external mouse + keys implementation if you want to have any decent driving with mouse and keys in AC, define it as normal wheel+pedals+H-shifter in AC so that all the crappy enforced helpers get disabled, they even force some on if you don't define clutch or H-shifter, you literally have to define it all to get rid of them. I even have handbrake defined as an axis not a button just to be sure there is not some crappy helper hidden. Because once you're doing all the work to get working right you might as well do it all.

Kunos didn't want to remove or allow these hidden helpers to be toggled on/off by users and AC forum fanatics only get royally pissed off when someone shows them the bugs and issues in their favorite Arcade.

There is also probably in this very thread or elsewhere on LFS forum a script from, I believe, Skagen that you can also use as a starting point. Yeah Skagen, here is the file name if you want to search for it: Skagen_LFSv2.py It's also for FreePIE as mine and I used these existing old scripts often made for rF as a learning point to see what I need to define for FreePIE to work.

Best advice I can give to anyone about AC: If you have anything to say about AC that isn't fanatical positive mindless praise, then avoid AC forum as all that will happen is eventually one of the developers or mods will ban you and yes their fanatics and developers also monitor other popular websites related to AC such as RaceDepartment, so beware even elsewhere what you write that could somehow trip off their fanatics.

As much as I like AC for it's modding and some positive differences from LFS, the lack of features, developers/money-grabbing/am-gonna-ban-ya-all-just-because-I-can/god-syndrome and poor community is it's biggest weakness.

You know I haven't spared LFS my criticism either over the years on it's multiple forums, yet never had any issues with the devs or community. AC it's different in that regard.

I'm not too optimistic about ACC, I think it's a money grab so they can keep the machine churning. Which I understand but then why not make something worthwhile. So far it looks as a no modding GT3 only copied AC reskinned with UE graphics and probably an online server ranking, no custom servers I think. Aka $racing made in Italy.
Last edited by JackCY, Tue, 24 Jul 2018 15:09.
Flotch

Thanks for reminding us you are the 1st lfs fanboy around here.

ACC may not be attractive at all : kind of redundant on AC on many aspects, and you know you will have to pay again and face most probably to bunches of DLC (if interested) ...
I think I will buy it ... but not so excited, just to see the graphics part and how the handling feels (one car/one track if I read correctly for now)
nikopdr

Hey, it's not his fault LFS offers the best racing sim experience physics- and compability wise

heh that's why we have around 100 daily active players.

I love LFS but let's face it, there is simply better products for every needs out there.
Eclipsed

Careful,not that you also get a fanboy stamp on you!

So which product offers best and easiest server hosting for events and league races? In which one can you alter many settings on the fly without restarting it?
lfsrm

It's very relative, and that's your personal opinion not a general rule, league hosters are doing just fine with other sim even if they don't offer the simplicity of LFS but price need to be payed for actual gameplay feature, I guess the more feature you have the more complexe is the server setup.

Every sim out there has something to offer, people are aware of that and that's why LFS is not their sim of choice anymore, maybe it will change in the far future with some big updates.

As for me LFS will never leave my hard driver until it dies, as for every worth simracing title worth my time.
PeterN

That's massively annoying when you're used to LFS.
lfsrm

AC 1 HTML interface is pretty annoying, but at least it let us having some freedom with customized launcher mods.

Anyone tested AC Competizione yet ?
Flotch

yes, that is crazy ! Total fail on this aspect !
Graphics are quite nice (environment is very eye candy with plenty of mooving stuffs

that is pretty nice), but the road surface is looking ... not so great imo... Sounds are pretty nice to hear (like braking even it feels a bit not as natural as RL).
Handling ... I do not know. Some aspects are nice, some are still very disturbing (like you can loose the control of the car and spin it at 15kmph, if you go offroad the car is slowing down gently ...)
50-50 for me ...
Flotch

Awful to put the pedal to the metal

Very nice !!! Maybe a bit too icy, but fun !
edit : made a test with medium rain : it's very nice ^^ . Storm is full of water and the tires are not going well into water