Do you not like a challenge? Nothing better than overtaking the field?


Again, a challenge. I think it's great fun starting in the slower cars. Starting GT is nearly the best part of the game.
Boris Lozac

That would be the case if only it was fun

Recipe for winning those races so far in GT was ram the oponents and go buy, without getting damaged offcourse, otherwise they'll ram you

I suspose my opinion on good graphics must differ to yours. Im not denying the fact that GT5 has nice models/textures and whatnot, but the one thing that really annoys me is the lack of any anti-aliasing, and not just with GT, but with pretty much all PS3 games. GT:HD had no anti-aliasing. GT:P had none either, so im guessing the final build of GT5 will have none either, but as you said, we shall have to see until both are realesed. As for the enviroments, well not alot has been shown about FM3's enviroments, but if there anything like that spanish fantasy track shown at E3, then i will be a happy chappy.

You dont need to voice your opinion, its fine. Comparing updates with GT5 is a little tedious however. LFS is quite clearly stated by the devs as a beta, yet i doubt this would be the case when GT5 is realesed. My point was that GT5 is apparently going to be realesed with a rather small ammount of cars, then they shall add multiple small packs of cars as they finish them, and get you to pay for them. As for LFS, well ofcourse, we get new cars and content for free, and wont have to pay again until the realese of S3. I just think its pretty silly of them not to finish things like damage/content and then realese the game, instead of realesing a game which is not showing its full potential, which will only give them bad reviews.


Oh, you fell for that? Oh ok. Oh, and FYI, just because they take lots of readings and do lots of test's with the car's does not mean they can get the physics right. You say an EVO in GT4 drove the same as your real EVO? Well, if thats the case, then im sorry to inform you your evo had handling problems. Did it refuse to turn in, just like GT4? Did it slide at incredibly low speeds, like GT4? ,

See, now you saying that makes me think that you have not played FM2, and you are just trying to make it look like you have, so you can just slate it. I mean, you really think NR2003 has better physics then FM2? Christ, i think that even GT fanboys could say thats a stupid comment.
brt900

1. It was an example, racing tyres, racing engine etc. That's how you upgrade your cars, it's been like that since the first game. And the only tyres you can drive a fully upgraded car with atleast 500hp are the racing tyres, the street tyres give you next to no grip.

2. Sure, a challenge, maybe in the first 3 games.. Then it just becomes a grind for credits, licenses and cars. Rather than what the game is there for... "Gran Turismo - The Real Driving Simulator" - The game is there to be enjoyed, it's a game, you're meant to have fun, not sit there for hours on end grinding your teeth as you do the same race fifty thousand times to buy a Ferrari for the Ferrari League, and then you win the exact Ferrari you just wasted your time saving up for.

The driving, cars, tracks and graphics are all great, but the restrictions and the boring _boring_ grind for money? No thanks..
Gills4life

What restrictions? Have you somehow managed to get hold of a copy of GT5 so that you know exactly what it is like? I doubt it somehow. It's only a "boring_boring grind for money" if you make it so. You race in events and earn your money. So sometimes you have to race an event more than once... I haven't heard Lewis Hamilton or Sebastien Vettel moaning about having to compete in F1 year after year or having to drive in Spain year after year. Drivers do not go to Le Mans and then refuse an invitation to race again, just because they have already done it once. The game is setting you the challenge, if you can't be assed to take up the challenge to earn the cars, then you shouldn't even bother posting in the GT5 thread, because that is part of what the game is about. 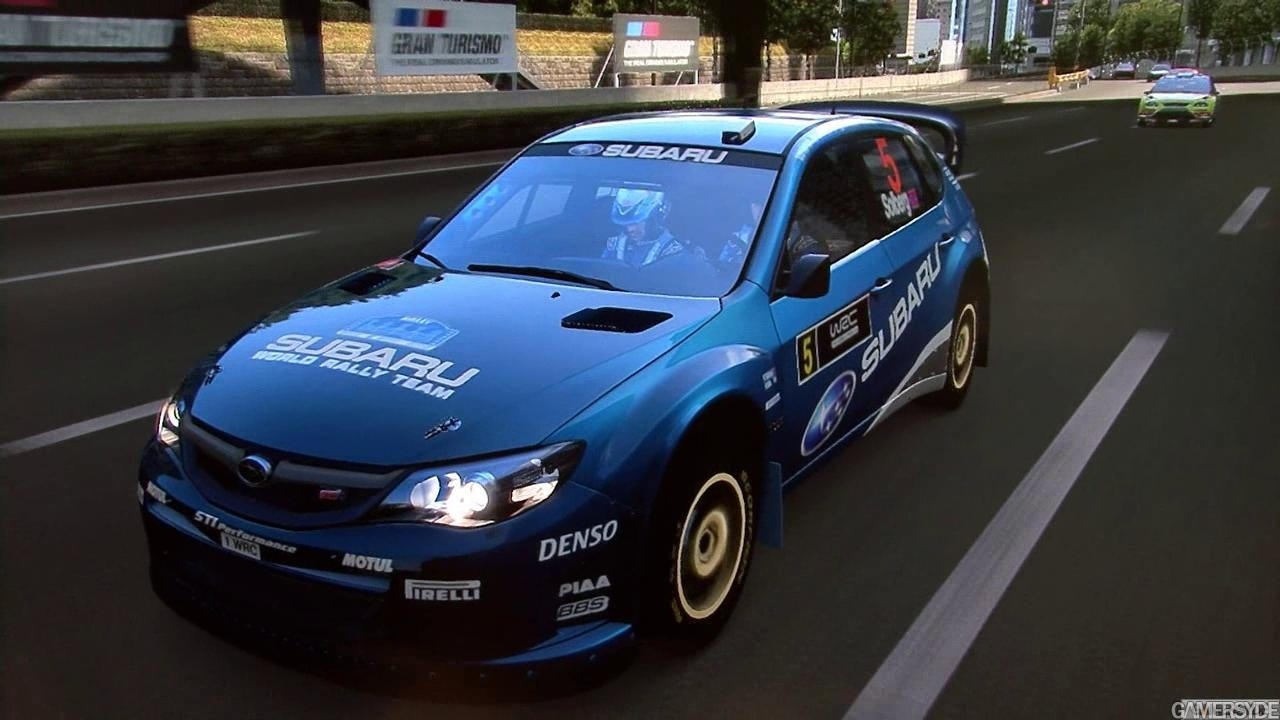 That doesn't look right in that res... have you got a bigger version of it?
Boris Lozac

That's real mint, wonder how they do it.
The Very End

Looks amazing.. really looking forward til when it's out.
theirishnoob

i cant wait for this now as i got stuck into prolouge their yesterday,

Forza will be better but ill buy this anyways

Man! They have everything! GT5... Well damage, is about time. I mean FM1 had damage. The PS3, with such processing power, should have done it no problem!

Look at the list. They have everything. I might just get a PS3 for this!
Boris Lozac Wha? That car is moving, that's why the rim looks like that.
Gills4life

To be totally honest with you, the Forza rims look cartoony, and I don't think you can justify saying it fails just because you do not have a PS3. That's pretty much admitting you're a fanboy.
JJ72

I guess the problem is it looks flat.
Boris Lozac

Have any of you looked any screenshots recently, that's car po*n. Badmouthing graphics on this game is just a no..

Not questioning the graphics overall but that picture does look a bit iffy, the other GT5 screens doesn't look like that one on the rims) the rim have a depth to it even when it's blurred. Don't call it badmouthing, I just don't make every single post full of praising. Just take it in a matter of fact sort of way.
Boris Lozac

I posted that picture just cause there's a release date on it.

You do realize that screenshot is from Prologue right? Not GT5?

They don't look flat at all. XD Better than some games i admit.

Rims tend to look "flat" when moving at a fast speed due to your eyes not being able to keep up.... it's kinda like looking up at a moving fan if it's moving fast enough, so you cant really pay attention to the details unless you roll your eyes with a specific part of said rim/fan.