its just the vid, low fps here to

the graphics are great, but that guy does not know how rally is driven with a 4WD or the physics suck making it impossible to drive well
5haz

T'is because hes using a console game controller, which fails for driving.
John5200

+ why on earth is everyone looking for the phisics? the devs even sayed it ll be more arcade then the last dirt...
DevilDare

the devs havent said that, they've said it will be better handling than the last one and that the cars will be more weighty
Boris Lozac

lol so Ken Block will be their cover man?
batteryy

blen kock seems to be quite popular these days
John5200

Now check this new pic out: 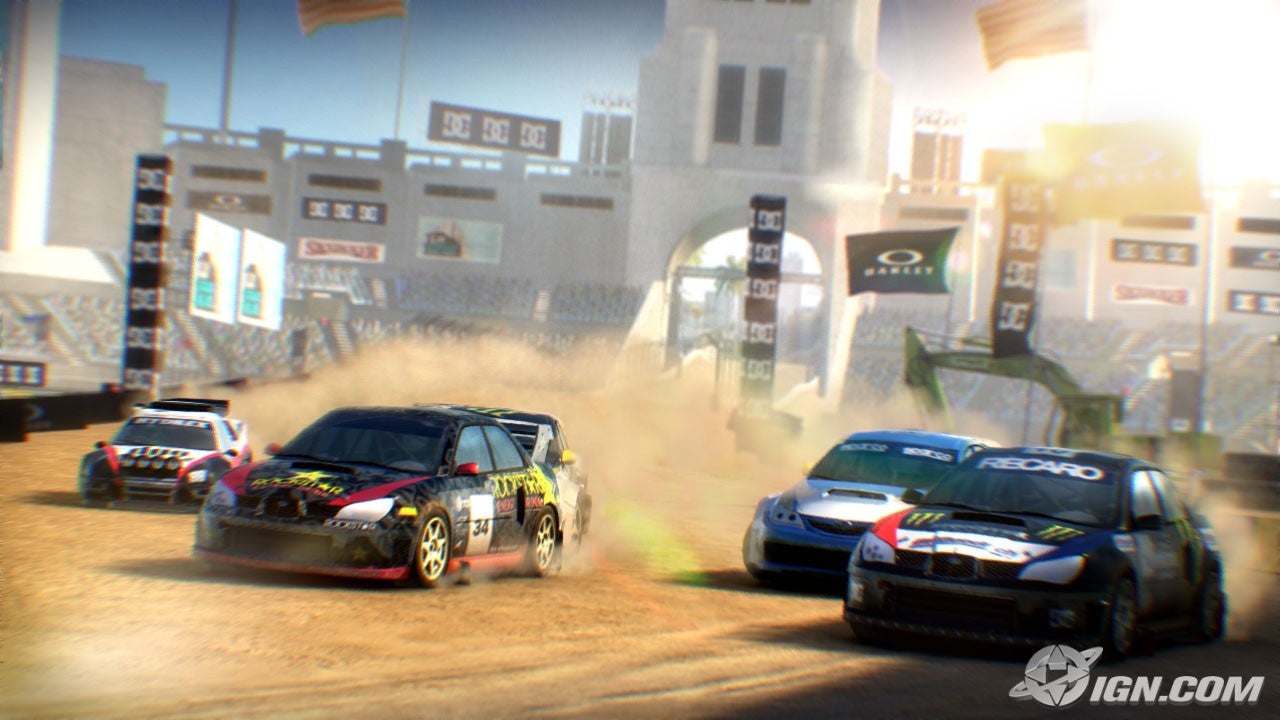 As usual, the screenshot is eye candy. But that car at the far left looks unoticable. Probably a rally car in RallyX form. Does anyone think it is a..... RS200?

Yes, it is an RS200 but the front lights are covered and replaced by 2 stickers

You can see the way the front wheels flick from lock to lock that he's using a pad, which is one of the reasons the car's behaviour is a bit sucky.
jvcala2

how the f**k did they ended up with Colin Mcrae Dirt 2 if all the trailers contains that ken blockhead dude who only knows to do donuts around a bloody pole?..morely like Ken Block Rally...
....
anyways..i hope this will be near good as CMR2 or CMR4
ATC Quicksilver

Ken Block is actually a bloody good rally driver, obviously not to the same standard as Colin Mcrae but isnt exactly around to promote it is he? Ken Block is probably one of the most well known rally drivers around at the moment, so he will appeal to the mass market, and he is leading the push to make rallying more of an extreme sport that appeals to the X-Games generation.
Furiously-Fast

WTF codemasters, 25 cars in a £40 console game? They better offer alot of dlc for free, otherwise it is going to be a miss.
jibber

It's going to be a crap arcade game anyway... who are we kidding?

Codemasters are rip off merchants, they know that people are retarded enough to be ripped off and buy the crappy dlc they offer.
Rappa Z

oh dear, cmr has gone far away from rally...most of the cars are some buggys or SUVs nobody likes, only few actual rallycars in there
The Very End

Well, if they offer 25 different cars with their own uique feel and handling, I see nothing wrong in that. Also, we can cross the fingers that it has something with the damage system to do, that they might did not get so many of the known brands to let them use their car in a game if the damage system is very good.

Again, we know too little, the video's around doesn't give enough deep impression to know how the game is, so before you have actually tried the demo or the game, keep your rage to a minmum

I have not been fan of the latest CMR (wrote NFS first time lol) games, but I will give this a chance before I start going all-out rage on my keyboard.

Edit : To above post : It's focusing on many aspects of motorsport, but the main different from earlier games is that it seems to go more over to the America Rally, instead of the more known ones. (Well, might not be less known, but sure better drivers than the American ones) . But again, I am curious to see how this turns out.
Last edited by The Very End, Sun, 9 Aug 2009 17:20.
batteryy

There are either 2 option 2 al the other drivers in American rally suck.
Or ken block is god....

If they are using Ken Block as like the main selling point why not rename the series for him i mean i reckon Colin would be turning in his grave to have another crap game come out under his name.
Thats personally what i think.
The Very End

I would also like to see the game getting a new name. I am sure that Colin wouldn't mind having a arcade game named after him, but when that game claims to be realistic it better be! I don't understand why they can say "the entertaining rally game" or something other than realistic. I enjoy a lot of arcade games, but none of them claim themself to be realistic.
123
4
567911131618192021