WARNING: THIS IS A TEST


THIS PATCH IS NOT COMPATIBLE WITH VERSION U

The changes are listed below.

Please back up or rename your LFS.exe from version U so you can revert to it if necessary.

IS_RES: TTime in qualifying now indicates time in session
IS_RES: PLID is now zero if the player has left the race

OutSim packet is documented in docs\OutSimPack.txt
Added steering torque as additional field in new OutSim
All data options can be switched on with OutSim Opts 1ff

LFS runs 'road.lfs' / 'sequential.lfs' / 'paddle.lfs' directly
(previously these scripts were called from a CAR.lfs script)
This is done after loading a car and immediately before CAR.lfs
Commands to run these scripts from another script are ignored

Many updated translations. Thank you, translators.

IS_CPP FOV can now be used in-car but not smoothed (0 = no change)
InSim NLP / MCI minimum time interval reduced to 10 ms (was 40 ms)
FIX: It was possible to miss IS_PSF packet after taking over car
FIX: STime in IS_PSF packet was wrong after car was taken over
FIX: Free view roll is now reported in InSim IS_CPP packet

In Graphics or Misc options (in-game) click car icon then 'P'
You can now see CPU usage for Physics, Draw, Prediction, etc.
The "Pred" line shows CPU usage for prediction of remote cars
Prediction time also shows up in an MPR if /mprlag is set

Enable by setting the OutSim Opts value in cfg.txt
All data options can be switched on with the value ff
The new data is documented in a header file OutSimPack.h

When LFS is set to close the reason is logged to deb.log file
Added a little more logging about D3D initialisation to deb.log
CAR.lfs scripts are reliably run when user car is spawned or reset
FIX: Memory leak related to threads (most often for skin download)
FIX: Replays from old Westhill before 2015 now marked as obsolete
FIX: Driver names ending with a lead byte could corrupt text
FIX: Issues with driver names ending with caret character

A FULL version of LFS 0.6U must already be installed

To install the PATCH using the SELF EXTRACTING ARCHIVE:

NOTE: You can see if the patch is correctly installed when you run
the program (LFS.exe). At the bottom of the entry screen: 0.6U25

NOTE: To use the new GTR configuration for XRR / FZR / FXR

Edit: Drift configs are fun, can get some nice angles with them!
Edit2 Any one online this weekend? Would be fun to go online again, been years.
Last edited by Bose321, Fri, 5 Feb 2021 18:48.
tankslacno

Testing with 32 AI's seem to be working fine when I'm alone at least but my bug is that AI's will not change tires even if i have tire change set to "always" in F12-box. I should also mention that I initially did disallow refueling in server settings but allowed it again via Admin-command during qualifying.

Tested this in Single Player as well, same thing happened

Attached a Screenshot about this in multiplayer mode

EDIT: This happens also on player itself in both modes. I also tested other F12 settings (damage etc.) and they seem to work properly. It does change your tires if you change tire compounds.
Last edited by tankslacno, Fri, 5 Feb 2021 19:38.
chucknorris

Aye, it seems like resetting the car (spacebar) does no longer reset the tyres.

This did actually happen like twice a week to me, so cheers

Posted this on Drift team Discord so to get more feedback from other drivers/drifters, thanks @Scawen
Flotch

: amen to that patch

), and saw that : XFR and UFR are not included

... They are designed to be rallycross machines !
Scawen

Thank you, it was also for real players, not only AI. I've uploaded U18 with the fix.


Thanks, that was a result of the same bug.


XFR and UFR can use rallycross tyres too but you don't need to select a different configuration.
bobloblaw

S3 licensed
Joined : Thu, 2 Dec 2010 02:03
Posts : 125
Online at :
Just a Ride
No bugs to report, but I think allowing slicks on RAC/FZ5/LX6 would be nice. It would destroy records but servers could still limit to road tyres.
EgorkaPomidorka

Thank you for your work, it is really cool to drift on high hp powered cars!! But i want to ask you, can you add 45 steerlock to rb4? It would be really cool to drift with much angle. There is a lot of this car lovers, and this car has a big drift potential. Or maybe it can be realised the same way how you did it with GTR cars.Thank you in advance for your answer!
Last edited by EgorkaPomidorka, Fri, 5 Feb 2021 20:20.
tankslacno

Scawen, not a bug but two questions:

1) Did you ask Victor that can we test this incompatible update on hosts rented on LFS.net or do we have to use Dedi Host/create own server on LFS Client?

What came to my mind however is that this is an incompatible update though. So should we translators wait a little bit before editing those in-game help files to see what changes are final in official patch?

By the way, I also noticed that English language doesn't mention anything about S3-mode in those in-game help files when starting a new host.
klbbadd2002

This is really great. I hated the idea of 60 degree lock until I was drifting around in the FZR and realize it was need and it works great.


My only dislike is the XRR is not H shift. Not sure if this is something youd consider changing or making an option because I for-see it not being used much in drifting being sequential only.
Degats

CPP Pos being relative to Centre view is working now, thanks

For some reason, I'm only ever seeing Config == 0 in NPL

Also, I've noticed that the driver model stops turning the steering wheel when the GTR cars hit their normal, non-drift, end stop, but the wheel continues spinning through the hand. Minor thing, but looks a bit weird.
UnknownMaster21

Spoke with some guys and they all been agreeing on that too H shifter for XRR Xr/drift please! Other wise feels pretty good!
R-to

Can you do something for the tyre wear? its way too fast way they overheat.
Flotch

Scawen if you make xrt to look lke this it will be very sick.. 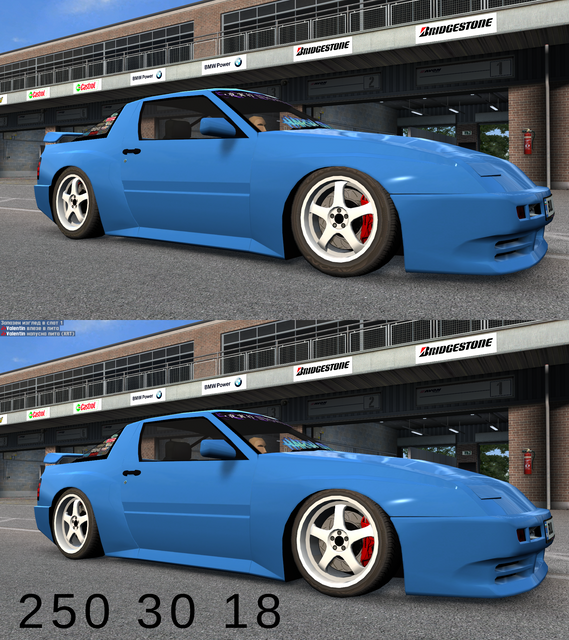 Too bad this plausible configuration was not available four years ago. But absolutely better late than never.