Check in C:\Users\Teemu\MNK\data\scripts\autoexec.lfs (in notepad) do you have good path to LFSLazy.exe

// This script is run when LFS reaches the main entry screen
// You can use it for initialisations, running scripts, etc.

This one should be that autoexec.lfs path you wanted...
What´s wrong with that then?

idk whats wrong, you should check if path is right (beacuse this is that "autoexec: line 5 - Parameter doesn´t pass" error)
teppari

Hmm, I didn´t find there myself any error but one guy said that there is something different... He promised to fix it during this weekend
teppari

Ok, now I have somehow working version of Lazy but it´s not starting automatically when I open LFS... Then, Windows Defender is very strict and doesn´t let me open/use Lazy unless I loose those virus scanning settings..
DANIEL-CRO

I just tried it but no... "Cannot open autoexec"
I had earlier autoexec.lfs file but just in case removed it yesterday when I was asked to remove older LFSLazy properly before I downloaded this new one I have now... But it seems like autoexec.lfs doesn´t include to LFSLazy installation then..

Beacuse autoexec.lfs its a part of Live For Speed.

Go to C:\Users\Teemu\MNK\data\script and make new one. Copy, paste, rename existing one to autoexec.lfs, then open it with notepad and clear content, if there is any.

You can also add manually (to autoexec.lfs):

I tried this already on Monday when I read your message but I write only now. I made new folder, named it to autoexec.lfs, put there same content there has been earlier (also those 2 lines starting with //) and it´s in right place (...\Teemu\MNK\data\script). Still same result when I tried Other -> Autostart -> Install : "Cannot open autoexec"
I think I made this properly, autoexec.lfs is small text file etc. ...

Can you make screenshot of folder with that file? Did you created new text file (fom right mouse click context menu) and renamed it to autoexec.lfs? If yes do you have disabled "Hide extensions for known file types" in your windows?
teppari

I took some screenshots... I created this text file from upper left corner (I have Windows 10). I have no idea about that last part of your message ("Hide extensions for known file types" thing)
LakynVonLegendaus

The autoexec.lfs file (not folder) has to be directly in the script folder. It will not work if it's in a subfolder.

(you will probably have to rename the autoexec.lfs folder before moving the file because for some reason Windows doesn't allow names of files and folders to be same)
Draggo

ehh...
just download autoexec.zip from my attachment and extract it to your data\script folder


I wat talking about this (tiedostotunnisteet):

How do you read the layout objects?
Cronick_

I cant download it anyhow, pc just locking it as a virus
DfndR

Hello there. I have a question. I have been using your program without problems for 2 years, but I have encountered such an error. What is the solution? Have a nice day. 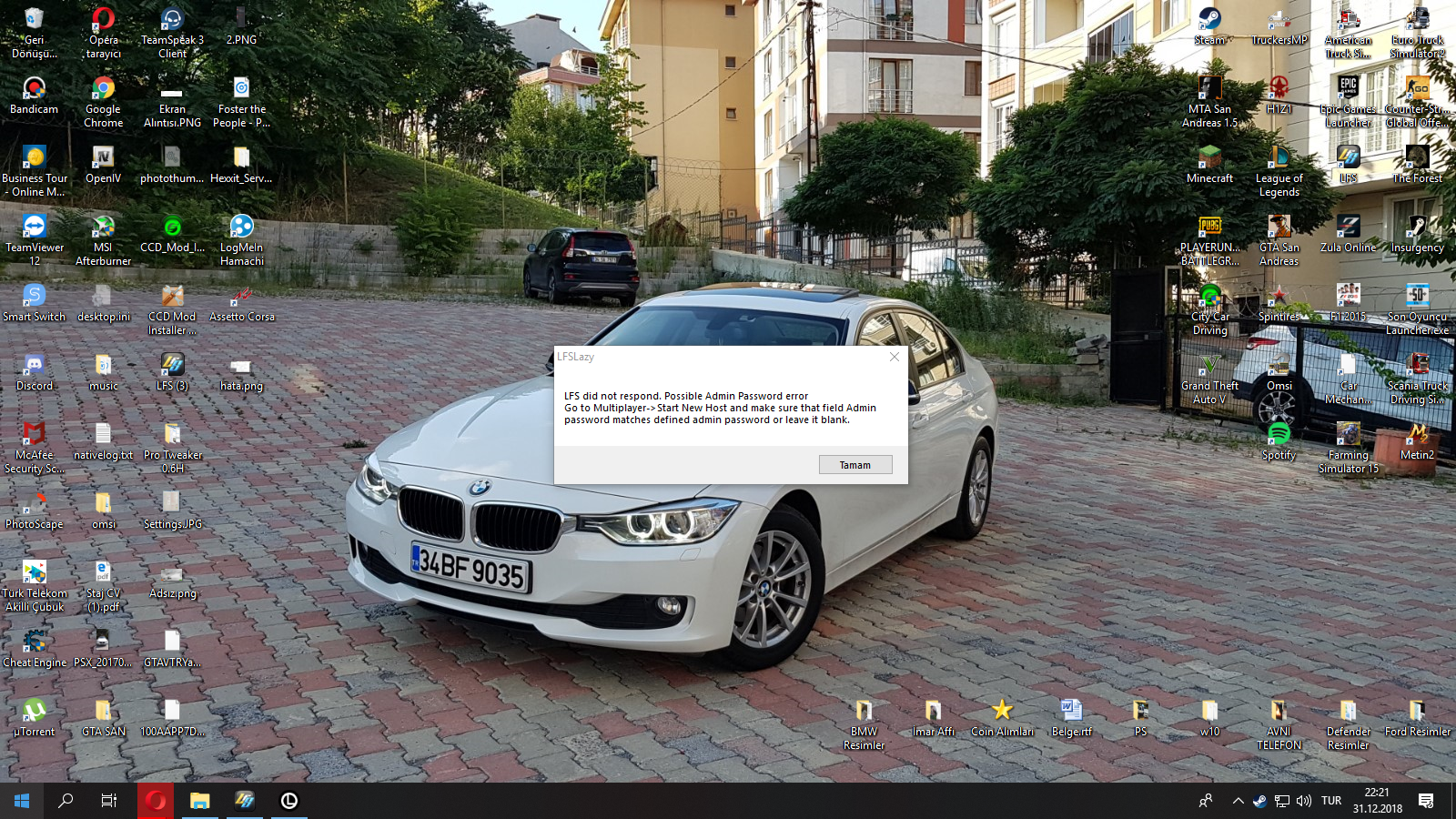 I have a question for DANIEL-CRO... Will it be there an update where LFS Lazy supports more than 256x256 resolution?
NorthModel

Hi! I don't think you need both the server password and the administrator password for the basic functions of LFSLazy to work.
DANIEL-CRO

Trust me I am high res freak. Dashboard in LFS is drawn on 256×256 surface. Using higher resolution textures would have no effect.
Pasci

Perhaps that could change if the cars will be updated (after track graphic update is done/released)?

Hey Daniel, I think you expect this question after seeing the test patch thread. Can we expect LFSLazy to be updated for 0.6T2?
DANIEL-CRO

Hey, I'll look into it at evening. But it may take a little while to update dashboard because "Increased resolution of dashboard texture"

1. For LFSLazy dashboards, (specifically on XRG) would it be possible to have oil and engine temp needles next to the dials?

When I try move them they only show either between the dials, or above the shifter (middle of car - XRG).

2. If it is not possible to fix (1.), would it be possible to add linear oil and engine temp gauges? (so they can be used as OilLin and TempLin, displayed where the dials typically are in XRG).

Screenshots of the WIP (with permission from Vano Paniashvili):
a.) as you can see the oil and engine temp gauges underneath the RPM dial doesn't have the respective needles. I'm trying to either add needles to both of them, or make them lin-gauges.
b.) I don't want to have to edit the .dds files as well, as its nice to keep the whole mod within one gauges folder.