For those who can read Russian a bit:

For those who cannot:

'In the area of ​​Toreza we shot aircraft AN-26 (http://pl.wikipedia.org/wiki/An-26). Lies somewhere in the mine "Progress". We were advising not to fly in our skies. And here's a video demonstrating flightless bird. The bird fell for urban neighboring territories. Residential area not caught. The residents are not adversely affected. There is also information about the second precipitate plane - this is probably the SU.'

http://en.wikipedia.org/wiki/Igor_Girkin - it is the guy who posted this

I guess there is no doubt who is guillty of this disaster...

1. Civil planes flew there all the time. FL330 is too high for every normal weapon, same reason there is quite a lot of civil traffic over Afganisthan and Iraq

2. Well they only have to count to make sure all their own missiles are still there, plus whatever air defence radar stations they have, due to the current situation I expect all radar stations to be manned and working in that area. A simple RPG or Stinger won't reach 33000ft. This does.

3. That exact flight went missing on ATC, stopped sending out its ADBS signal and people already found unquestionably Malaysian wreckage parts. And this time it was not over the open sea (where neither transponder nor radar reached it).
Mustafur

you better hope Russia wasn't involved in this or it could end bad.
TexasLTU

EU will once again will express their "deep concern" but nothing else.
Mustangman759

If it was a russian attack... Oh dear. CNN is also saying there is a possibility the plane crash landed, as apparently all videos do not show a smoke trail towards crash site as would be expected if a plane was on fire from a missile attack. However I would rather wait for official investigational news.
flymike91

Where else do militia get guided surface to air missiles.
przemek21061995

According to trustful Russian medias :rolleyes: plane was shot by Ukrainians, because their target was to destroy Putin's aircraft which was near the place of accident and they missed it

So it looks like the plane was mistaken for a military aircraft and shot down with a highly sophisticated "service to air" missile system provided to the separatists by russia. This could get a lot worse than it allready is. Strange feeling personally since i was working where the plane took off this afternoon. Deeply saddend for all the victims.
amp88

If this is a legitimate recording it brings up an interesting question: Were communications between Russian military intelligence and pro-Russian separatists being conducted in-the-clear (unencrypted) or do the Ukrainian security service (and their allies?) have the capability to decrypt intercepted Russian military encryption in (near) real-time?
kars19

The terrorists themselves admitted that they have the machine. 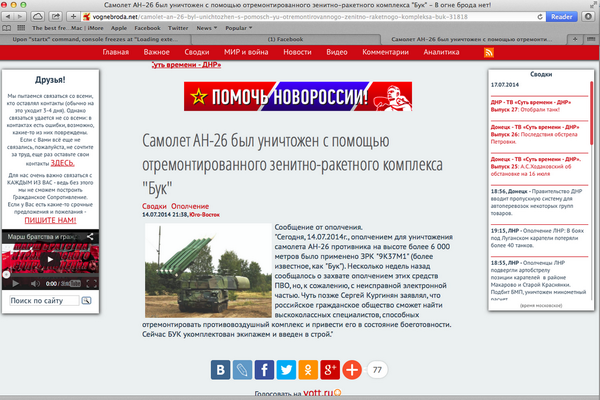 Grad shooting from Russia couple of days ago. Haven't got much publicity after the plane crash.
Racer X NZ

Lets look at history shall we,
Ukrainian military shot down a Russian passenger jet containing 78 people on 4 October 2001 as it flew over the Black Sea travelling from Tel Aviv in Israel to Novosibirsk in Russia. Russian crash investigators concluded the Tu-154 was hit by a Ukrainian ground-to-air missile despite the fact it was on its flight plan on an international airway which did not fall under any restrictions imposed by Ukraine. It exploded in mid-air, sparking speculation it was downed accidentally by Ukranian military on exercises in Crimea.
http://www.theguardian.com/wor ... wn-malaysia-airlines-mh17

Thats a link from the Guardian, reputable I believe.

Then there's this info, from Russia, so I'm sure the good little drones will discount it.
“I can say that Putin’s plane and the Malaysian Boeing intersected at the same point and the same echelon. That was close to Warsaw on 330-m echelon at the height of 10,100 meters. The presidential jet was there at 16:21 Moscow time and the Malaysian aircraft - 15:44 Moscow time,” a source told the news agency on condition of anonymity.

"The contours of the aircrafts are similar, linear dimensions are also very similar, as for the coloring, at a quite remote distance they are almost identical", the source added.
http://rt.com/news/173672-malaysia-plane-crash-putin/

So, the US has given their Al Queda drones no end of high tech weaponry, The US is busy supporting the "Official Ukraine Govt', The US wants to pick a fight with Russia, Could this be another Lusitania incident ? Putin's aircraft was in the same area at about the same time. Was this just a case of mistaken identity ?

FYI, The US's drone state Saudi Arabia has been flying in Al Queda troops from Syria at a huge rate, do your own research, if you are dumb enough to claim I'm lying then I'll post links but I'd like to think that your bright enough to find that for yourselves.

This is from a fanaticaly right wing US source, sadly their actually right, for all the wrong reasons.

In the Benghazi scandal we found out that the United States, in the person of Ambassador Stevens, was actually supplying arms to an estimated 60,000 Al Qaeda rebels in Syria. Why? The answer is the Shi'ite Crescent of Iran, Syria, and Lebanon. Al Qaeda rebels in Syria are Sunni Muslims, while the Assad dictatorship in Syria is Shi'ite. Naturally, the Saudi Sunnis have done everything in their power to slice the Shi'ite Crescent (Iran, Syria, Lebanon) in half. The Saudis have therefore sponsored and armed murderous AQ rebels, who literally decapitated children in the village of Maloula, where the language of Jesus is still spoken, as we saw in iPhone photos that flashed around the internet. Killing Christians and Jews is what AQ does best, as Americans should have learned after 9/11/01. But in a pinch they will also kill Shi'ites, like the Assad regime in Syria.


When Ansar al Shari'a, an AQ-linked group, killed our ambassador and four other Americans in Benghazi, it was essentially a corrupt arms deal gone wrong. The United States colluded with France and other European countries to overthrow Gadhafi in Libya, with Ambassador Stevens acting as the point man. Stevens, who is a CIA plant under State Department cover, then worked to smuggle Gadhafi's vast arms supplies to the Sunni rebels in Syria. That plot failed, because nobody can make a reliable agreement with the AQ's, who are themselves sliced and diced in the usual way of the Muslim world. Ansar al-Sharia therefore decided to burn out the Americans at the Benghazi arms depot, and, according to some reports, steal tens of thousands of MANPAD anti-aircraft missiles for their own use.
http://www.americanthinker.com ... ganda_empowered_iran.html

" and, according to some reports, steal tens of thousands of MANPAD anti-aircraft missiles for their own use."

Meanwhile,
An image of Israelis in Sderot who gathered on a hill to watch and celebrate Gaza being bombed has gone viral on Twitter. The photo posted by a Danish journalist caused uproar online.

Do I see any posts about this ?
Oh, sorry, that's 'reducted' isn't it. Can't comment about that can we.......
And how many dead there ?
Bring on the flaming.
http://www.haaretz.com/print-e ... ionist-web-sites-1.268393
The Immigrant Absorption Ministry announced on Sunday it was setting up an "army of bloggers," to be made up of Israelis who speak a second language, to represent Israel in "anti-Zionist blogs" in English, French, Spanish and German.

Lets push some buttons, always fun....
Israel is sending military vehicles into Syria to pick up wounded Al-Qaeda terrorists involved in the fight against the Syrian Army before patching them up and sending them back into battle, another startling example of how the Zionist state is working with its supposedly sworn enemies to topple President Bashar Al-Assad.
That’s a not a claim being made by Iranian or Syrian state media, it’s calmly admitted in a report by the staunchly pro-Israel DebkaFile .

Here's one of their posts;
The first objective of their Operation “Levant of the Prophet” is to seize the Quneitra-Ein Zivan crossing, before targeting Quneitra the town. Defense Minister Moshe Ya’alon, who visited the Golan Tuesday, May 13, said, “Syrian rebels have pushed Assad’s military into a corner.” DEBKAfile: Quneitra’s fall would free the Golan and S. Syria of the presence of Assad’s army and Hizballah.
http://www.debka.com/search/tag/Syrian%20rebels/

You'll need to pay to read the articles as your only goyim.

The word is also used to pejoratively describe those not of Jewish descent. It is regularly used by Jews to refer to any and all peoples of faiths other than Judaism.
http://en.wikipedia.org/wiki/Goy

Even as the Israeli leadership enjoys the pseudo proof from Boston on how nightmarish Islam is and how the world will now see it and leave the Israeli occupation alone, the most important thing has been repressed: Israel is becoming a racist society, in which the prime minister of a country that was founded after the murder of Jews salutes a rabbi who supported a work on the laws of killing non-Jews.

That Netanyahu has thus essentially expressed support for “The Laws of Killing Non-Jews” overwhelms the rabbinic rulings being imposed on the military and on all of society and that are being revealed daily, whether it be permission to rape non-Jewish captives or the “necessary” inequities against “goyim” by the state. These rulings aren’t really new. This is a bucket that has been slowly filling for a very long time. It’s a bucket that has been drawing from the depths of the racism that Heinrich Heine warned against. It’s a bucket whose profound support by the prime minister will lead it to overflow and spill onto all of society.
http://www.haaretz.com/opinion ... he-goyim.premium-1.517024

That's from an Israeli paper, Worth reading.

This is so much of a sick theory... Jesus

- Since Putin was returning from Brazil to Vnukovo airfield, flying over Donetsk in Ukraine would be a hell of a detour.
- Surface-to-air missile systems primarily use radars to guide the missiles. Visual appearance of the plane does not matter. Even if you were trying to identify the aircraft visually, the lack of 4 contrails should give you a clear info that you are not looking at an Il-96. Contrails are one of the few things you can easily make out from the ground.
- The accident you are referring to happened during a big military exercise during which 24 missiles were fired and one of them hit a wrong target. It should also be noted that the weapon that hit the Tu-154 was most likely fired from an S-200V system from 1970.
- The reported times where the flightpaths of MH17 and RA-96016 were supposed to intersect are 40 minutes apart. An airliner travels about 600 km within 40 minutes... how lousy a shot would you have to be to miss your target by that much?
- MH17 had been tracked by Ukrainian ATC since it entered their airspace. They knew the aircraft was there and where it was going. It also followed the same flightpath as the previous flights.
- Why would the Ukrainians try to shoot a Russian plane down anyway? I thought they were trying to keep the Russian forces outside the Ukraine borders.

Do you actually spend any time thinking when you're concorting these theories or do you just empty a bottle of cheap liquor and type whatever happens to cross your mind?
amp88

Terrorists quickly transporting surface to air missile system back to Russia
https://www.youtube.com/watch?v=mICnsgEY7wE
2 missiles has been shot, 4 in total 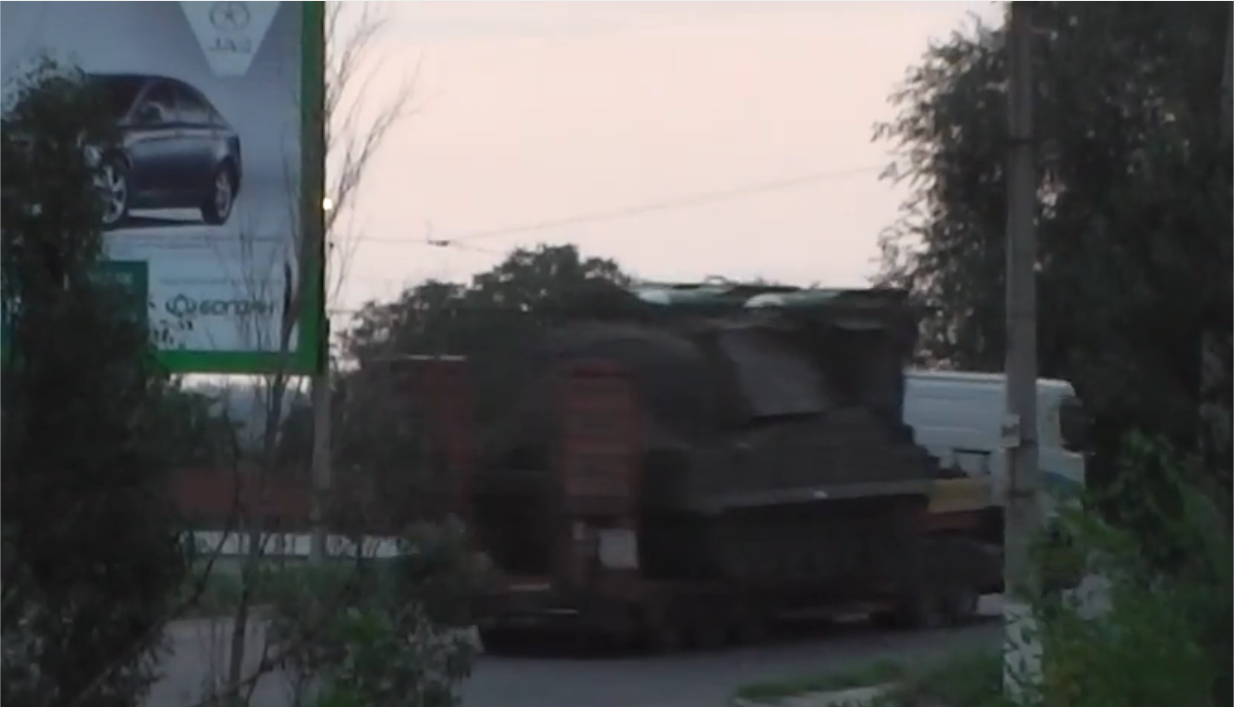 I'm sure Racer X NZ has convinced himself that George W. Bush is somehow behind the shooting down of MA17 and other planes in Ukrainian Air Space.
DeadWolfBones

Not to mention that it's impossible to see the markings on a passenger jet at 33,000ft altitude.
Mysho

google translated, but still understandable and you can see the actual loss that came with this absurdity.
amp88

Uhoh, I think I hear RacerNYZKQPT making a conspiracy out of that. It was the medical companies!
Fordman

And what thread is that Ant

and here the sad stories flood the dutch television
Anthoop

I do not believe that any person of power/intelligence made the call to fire at a passenger plane.