George Barris ...... Some people will be thinking who was this legend who has sadly passed away.....http://www.thewrap.com/george- ... tvs-batmobile-dead-at-89/
jonmrbean

Another sporting legend sadly passed away at such a young age....Jonah Lomu

"Don't ever turn your back, on the all black haka son" - Jonah Lomu﻿
https://www.youtube.com/watch?v=Ine8lfJiYIM

After just eight minutes the All Blacks were leading by an unbelievable 24 to 0. Miraculously, the Wallabies came back and were leading 35 to 34 when, in the dying moments of the game, the great All Black winger Jonah Lomu scored the winning try.
https://www.youtube.com/watch?v=heoO_5MvZ0w

At least he saw a NZ World Cup win, over Aus at that, what better way to go out.
RIP Mate.

1995, 6"5 262lbs on the wing?!! Crazy!! But his quickness, agility and speed made him a BEAST... By far the most devastating player/winger ever. https://www.youtube.com/watch?v=hLTxcyarfjw

History and info regarding the Ka mate Haka. *
https://www.youtube.com/watch?v=dHCJIEoa0lE

TENEI TE TANGATA PU-HURU-HURU
This is the man, so hairy

NANA NEI I TIKI MAI, WHAKAWHITI TE RA!
who fetched, and made shine the sun!

* And as usual, here is a different point of view which, in our culture, must be respected.
Hona Wikeepa 1 month ago
I think he should let the descendants of Te Wharerangi tell their own story. That's the proper order. I'm direct line through Te Raroa, Te Wharerangi, and my mother Parerohi. Our version of our koro's story differs markedly from the story of these people I have never met. The moral of the story is that Te Wharerangi lays down his life for his enemy Te Rauparaha. Ten years later Te Wharerangi is killed by those people that sought Te Rauparaha's life, according to the utu principle. it is a shame that the people telling our koro's story have got it so wrong, and so Ngati Toa, also have it so wrong. At Okahukura on the poutokomanawa, Te Rauparaha occupies the bottom rank, inverted under our kuia. Here, there is no mana. Furthermore, Okahukura, isn't a person like Rakeipoho or Haikairo. It is a place. And finally, Te Wharerangi's father Tukaiora, is pre-waka.﻿
Last edited by Racer X NZ, Wed, 18 Nov 2015 11:30.
Lotesdelere

Anyone who watches Roadkill on youtube. There pitbull Bika, (pronounced bee-kuh) has passed away....

But, he was happy with kicking some French Arse at this World Cup. Cus, history....
https://www.youtube.com/watch?v=sefkAixRDf8

‘I hated losing,’ he says. ‘When you hate losing, you find a way to win. The thing I find is that when you are backed into a corner, you can do one of two things: it’s either you accept you are going to lose or you come out swinging.
‘My attitude has always been: “If you beat me, then next time I meet you, I want to beat you and I don’t want to just beat you, I want to absolutely give it to you”. It’s that sort of drive and mentality that gave me the success I had on the pitch. I hated coming second to anybody.
‘I gave the person the respect that they are due as a rugby player but outside of that, I don’t fear nobody. It’s just the way I attacked life. This disease is a challenge but you either lie down and die or you accept it and carry on. That’s where I have been very fortunate. I have just never been able to accept coming second to anybody or anything, including an illness.’
Now that he has his boys, his motivation for overcoming the disease has changed. He does not think about rugby any more. He thinks about his sons and making sure they are protected from the hardships he suffered during his own traumatic childhood.
Lomu’s father used to beat both him and his mother until, as a young teenager, Lomu snapped and fought back. He was banished from home and did not speak to his father again for 17 years.

Read about it yesterday

At least Pearl Jam is still keeping it together and is set to last a lot longer.

EDIT: just watched this whole concert about a week a go

That game has done more for me than can be put into words.
Racer X NZ

Motorhead vocalist and bassist Lemmy aka Ian Fraser Kilmister has died of cancer in Los Angeles.

He died on Monday (US time) aged 70. The band confirmed Lemmy's death with a post on its official Facebook page.

"There is no easy way to say this...our mighty, noble friend Lemmy passed away today after a short battle with an extremely aggressive cancer," it read.

Lemmy was lead vocalist, bassist, principal songwriter and the founding, and the only constant member of Motörhead since the band’s formation in 1975. To date, Motörhead have released twenty studio albums and achieved 30 million in sales worldwide. Their last record, Bad Magic, was released in August 2015.
sermilan

He's just had a big birthday party with lot of famous people participating on the stage...
R.I.P.
MandulAA

Not an Immortal as hoped.

Had a wee cry when I heard the news.I was sure he was an alien and would just leave for his home planet when the time came.

"Man of words,Man of Music"

Its webpage says it is "mostly read-only".
Does it mean that it's not in active development anymore? It doesn't look so by the posts on its forum.


Not that I don't care about David Bowie's departure, I'm deeply saddened by it, but this RoR post caught my eyes...

Absolutely awesome track, one of my favourites....

But this version is even better, a Cappella version that shows how great they both were as singers. (Yes, a video but just listen

"Look up here, I’m in heaven
I’ve got scars that can’t be seen
I’ve got drama, can’t be stolen
Everybody knows me now

This way or no way
You know, I’ll be free
Just like that bluebird
Now ain’t that just like me

The artist to the end..

Grizzly Adams character actor Dan Haggerty... cancer
Watched that show when I was a kid.

Glenn Frey.........Glenn Lewis Frey was an American musician, singer, songwriter, producer and actor, best known as a founding member of the Eagles. 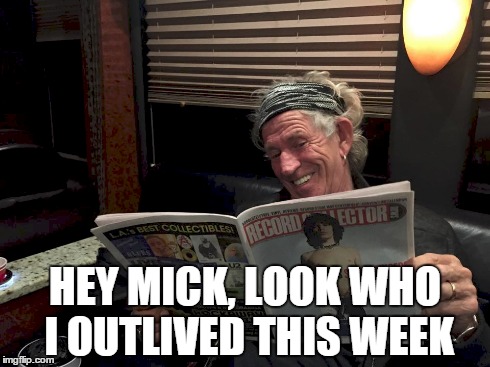 Another great musician left us... R.I.P.