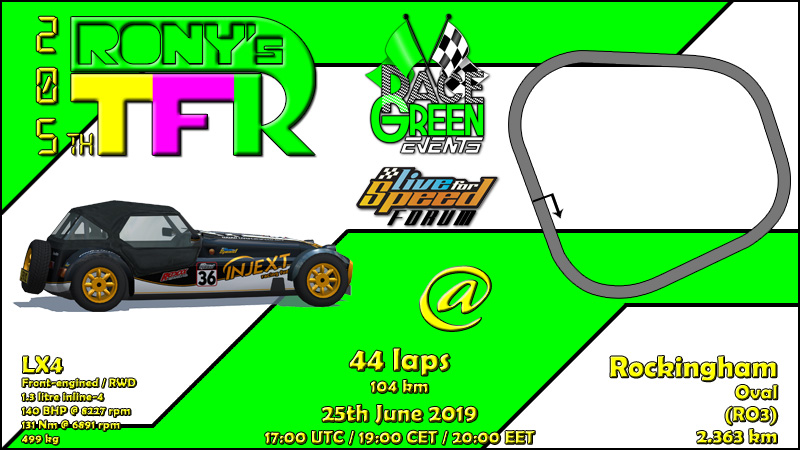 Another box of chocolate

I may be there!
Tomislav531

I would join, but can't because work.


Yeah, because requires to brake with certain cars. I would still join if I could.
lucaf

Join now, this is one of those races where many cars will create lot of fun
Eclipsed 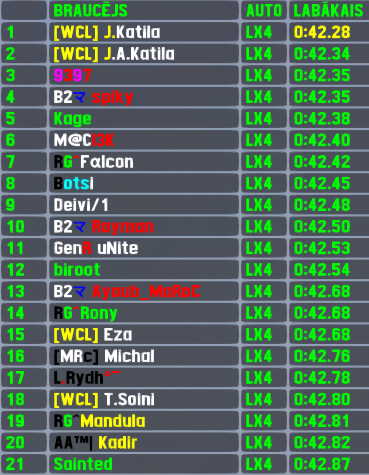 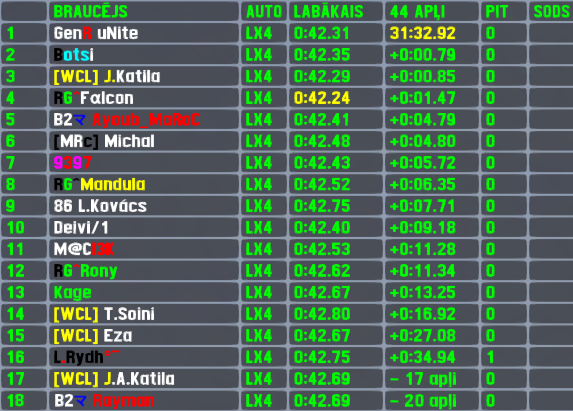 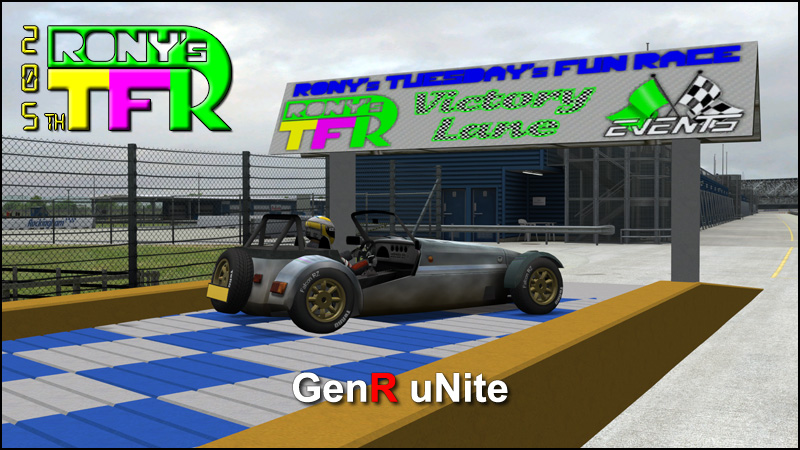 Yesterday featured a race that was a bit different from usual races - the LX4 was raced at Rockingham's oval track,where things feel a bit different than in LFS's classic oval of Kyoto. A lot of overtakes and a total of 17 official lead changes (much more during the lap,as stats are made only about lead changes between full laps) and 3rd repeat of most drivers leading a single race - 4. Some liked it,some not,but everyone agreed it was quite intense.

Usually starting from outside of top10 one does not have a good chance of winning a race,but yesterday was different and Unite used his chances for that - he led just 2 laps,last one of them in sole lead - a safe 0.79 seconds gap over competition over finishing line. It was 3rd win for Unite,who keeps his "perfect year" alive with 13th top5 finish in 13 races and 17th overall. Also the finnish winning streak is kept alive and is now 9 races long. Despite a lot of positions changes,the top2 finished in same order as standings of this year - 2nd was Botsi,who was the highest finisher without leading a lap,36th top5 finish in his account. After a long break,J.Katila returned to racing and together with his father he managed to set the fastest lap in qualifying,making all-Katilas front row for the grid. The duo led first 1/3 of the race when they were cought by chasing group,while J.A.Katila's race ended with an incident,J.Katila still was in leading pack and led a total of 31 laps. But at the end the situation did not allow to trade lead laps into win - just 3rd place finish with his 1st try. 4th was a driver,who led 5 laps and also set fastest lap of the race - 4th such effort for Falcon,34th top5 finish for him. Top5 was closed by Ayoub Maroc,who spent most of the race in chasing group - he improves his previous best position by 3.

RTFR now takes 2 full weeks break,then one of the slick cars will return for racing. But already this sunday the 4th round of XRT league START will be run in RGE's environment of the month - Rockingham. The well known Handling configuration will be run in reversed direction for 150 kilometers - signups for the league are still open until start of the qualifying,new entries might not have chance for high positions in standings,but could make a difference in both teams and nations championships.
lucaf

That was actually more entertaining what I expected. I did some really noob mistakes like going wide at critical time, or lifting too much and losing draft. Anyway, great experience, and would love to have such races more. I am surprised Rony did not announce how many drivers went under WR

Because it would be too obvious going under WR... Slipstreaming/Bumpdrafting
lucaf

no actually my connection was lagging (which affected also some bump draft operations), too laggy mpr for longer video. 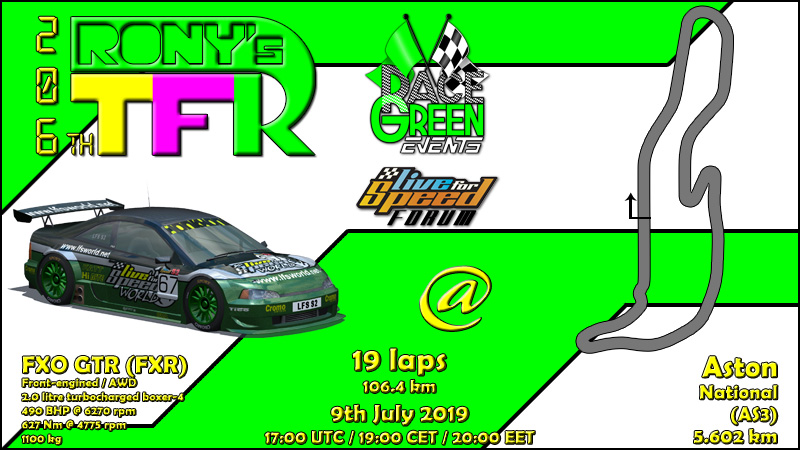 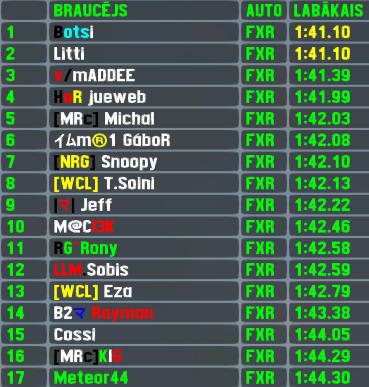 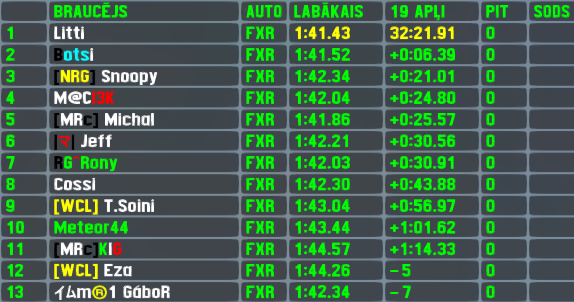 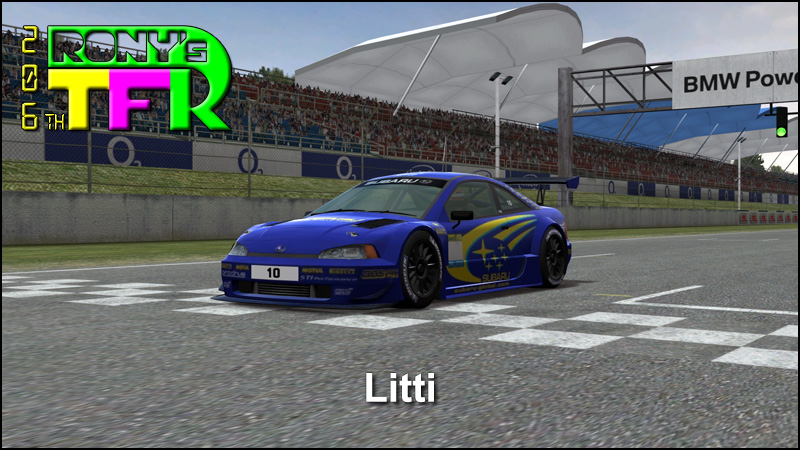 One of the most classic non-demo combos was up for grabs yesterday and most of the participants had a fair share of usual action here - passing,side by side racing and few bumps here and there. Despite all this there were no real complaints and everything settled in peacefully.

Litti tied pole position laptime with his last effort late in qualifying,but as you know tying is not enough,he had to start the race from the worse front row position. But outside pass when entering turn one sealed the deal for race lead,which Litti never gave up - Litti brought Finland the 10 race win in row! He is now the 18th driver with 4 or more RTFR race wins while he also set his 6th fastest lap of the race,also the top5 finish was his 6th. Most successful driver in RTFR history Botsi added 16th pole position to his achievements,but could not trade it for another win as he got into some battles early and never really could challenge his countryman for lead despite returning to 2nd place already in 2nd lap - 37th top5 finish for him. Snoopy had a rather clean and trouble free race and repeated his best RTFR finish - 3rd,7th top5 finish for one of the event veterans. Maciek had a fair share of battles on his way to 4th place finish,4 top5 finishes now in his account. Michal had a good start and even led the race for few meters,but had to give it up for Litti and due some trouble he even dropped back some positions more,but he climbed back in order to finish 5th,which doubles his top5 count now.

Action from Race Green Events does not stop this week yet - still last round of STARL ahead,but no new drivers can enter the event,but already next tuesday the next RTFR XL is scheduled - it will feature the 1st event appearance of FZ5,which will be raced in Aston North configuration. And after usual 2 weeks break the next normal RTFR will return with some street legal car action,but as always - more details in the weekend before.
nikopdr

Damn, I especially wanted to drive this combo but couldn't make it because of unexpected delays so i couldnt get home in time

Looks like it was a fun race based on the stats alone, too
Botswanan Salama

This race was quite exciting. 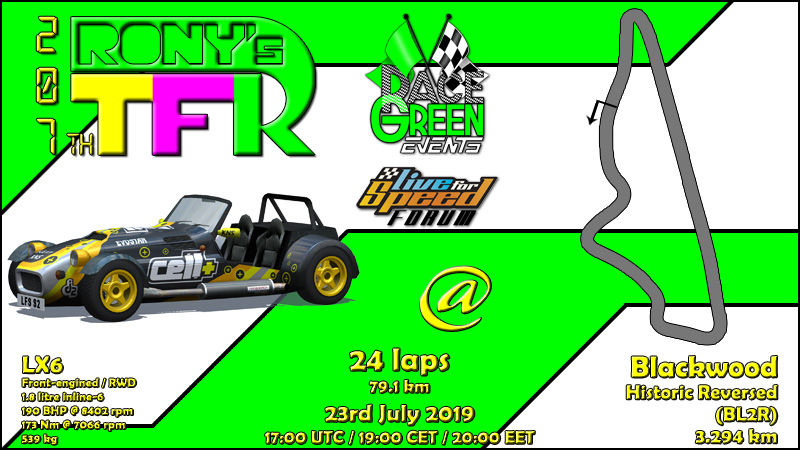 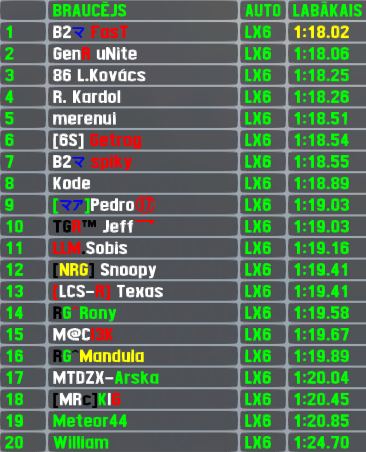 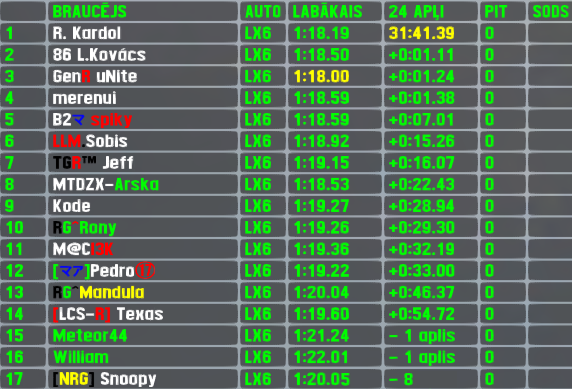 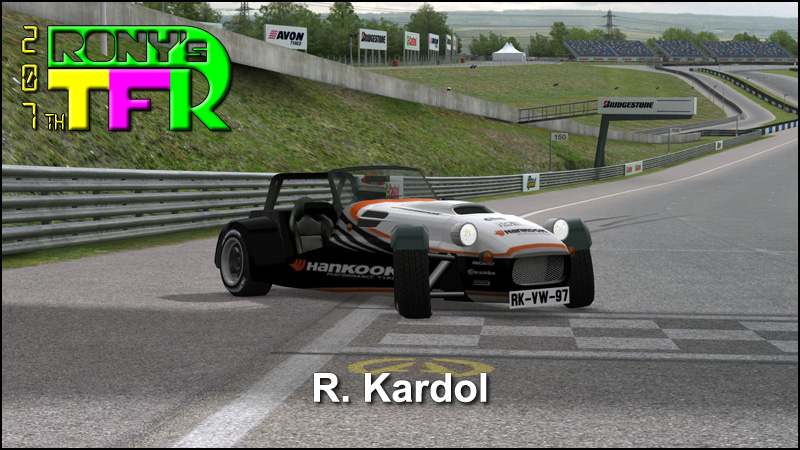 Our own Catherham version was used for this event - the LX6 was raced in Blackwood Historic reversed configuration offering plenty of overtaking opportunities. Already in qualifying there were thoughts that the finnish streak might end at this race as only a single finnish driver was in qualifying results top 7 - but it was the freshly baked world record holder. As you can see in results,hotlapping pace was not enough to keep the streak alive. But there is still a streak of it's kind - last 17 races have been won by drivers just from 3 countries - Finland,Lithuania and Netherlands - who will be the 1st outsider now?

Fast was the one who managed to beat WR holder in online hotlapping competition and scored his 6th pole position,but he left before the race and never tried to convert his achievement into 6th win. This left the opportunity to 4 other previous winners - R.Kardol was the one who led 20 of 24 laps,but saw a car or two ahead of him plenty of times. But still he managed to pull away slightly from closest rivals in later stage of the race and led last 4 laps on his way to 4th RTFR race win,rounding also his top5 count to 20. L.Kovács was in the mix for whole race and won the final battle for 2nd position - 8th top5 finish for him. The fastest on paper was Unite,but he never had a chance to unleash the pace with opposition close around him - on his way to 3rd place finish he set the fastest lap of the race - 5th effort for the 3-time winner and new standings leader,18th top5 finish for the only high finishing finn in this race. Merenui is the most successful driver from all participants in this race,still only early in the race he was able to make the battle for lead a 4-way,he was able just to watch the action from behind for the rest of the race - 4th place yesterday is 31st top5 finish,still less than 1.5s apart from race winner. Spiky was the best of the rest in 5th position - he pulled a safe gap ahead of all others,but never was able to challenge the leading 4,5th top5 finish for him.

Hi Eclipsed,
Would be nice if you could share the Replay files of Qualify and Race.
Maybe using Google Drive.
The races in the Leagues are normally very good to watch.
Thanks!
rik97

It was a epic race this one and I loved every battle I was into. I made 2 screenshots from the race.

Looking forward to the next one!
GreyBull [CHA] 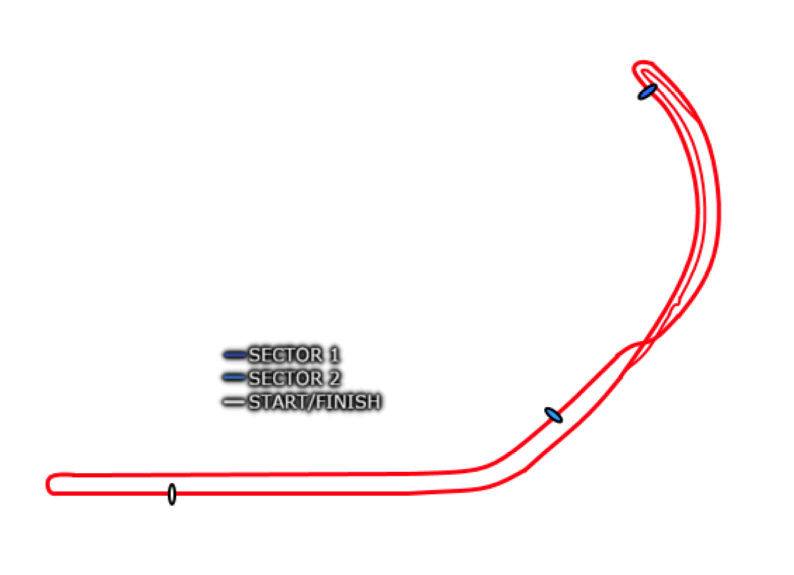 A custom reversed version of the Rony Sprint 8 circuit will be used for today's Layout Racing League, Round 7.
A fast, relentless circuit that will hopefully produce one of the series' closest qualifying session!

Thank you to Rony (Eclisped) and 9397 (lucaf) for the layout and edits! 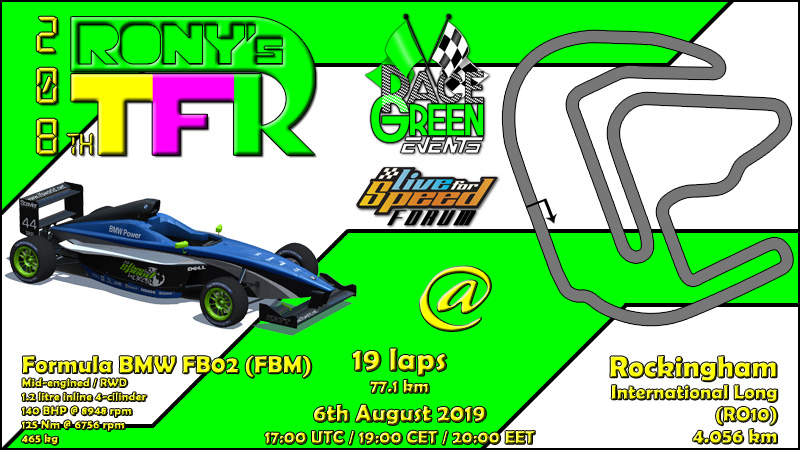 PS. I am aware of STARL final results being withheld,the work on them have been delayed due personal life distractions that has to be dealt with first. I'll post them as soon as possible while remaining events (RTFR/RTFR-XL) will be run in normal schedule.
k_badam