Good race, nice stats and great review about the race! Thanks! 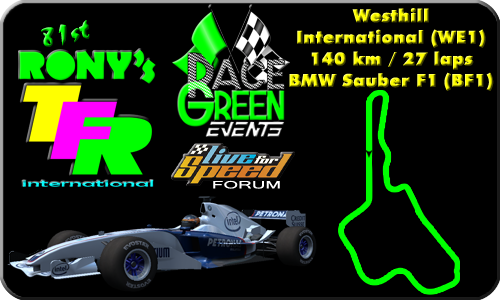 Winners first words after unluckily lucky race pretty much described this race - "What a messy race". At the start 2 leaders safely pulled away from the rest,who were still sorting out their positions,but then both leaders could not share their place on racing surface and lost their lead after joining green part of track due few contacts. After a lot of chasing,the very last lap brought tons of drama as 2 of top 3 drivers run out of fuel - leader V.Minnakhmetov lost power soon after 2nd split and never finished,while Rony took over lead,tried to defend it,but also run out of fuel 100m before finish,while the first time participant A.Wiśniewski had a good run in final straight to take the win anyway,taking also first win for Poland after scoring also first pole position for his country. After making few costly mistakes late in race,most lead laps owner Rony had to settle for yet another 2nd place,which is 35th top5 finish. Litro pushed very hard in last lap and took his 8th fastest lap of the race and finished 3rd,which was his 23rd top5 finish,tying Agent for 2nd most top5 finishes. V.Minnakhmetov was placed 4th in final standings,2nd top5 for him in 2 appearances,Falcon finished 5th,which is his 15th top5.

In 2 weeks we will taking out for a spin something very slower,since the last race beat the previous fastest race by big margin - this race had an average speed of 255km/h (previous fastest - 226km/h),also road tyres will provide us less grip,join us and prove that you can handle it!
vitaly_m

The thing I did to A.Wisniewski... I am very sorry, driving BF1 with crap mouse and bad mood is not the thing I should repeat. Yet it was kinda fun, hope everyone enjoyed it

Well i was going off pace big time and failing simple corners so we would get near eachother anyway. But not as near i hoped :d i have no idea how i managed to get round your car when i saw the onboard but the contact was rather unnecesary. Just racing, still better than Massa vs Perez, despite all i managed to win, with tons of luck on my side. Anyway thanks all for racing.
Eclipsed 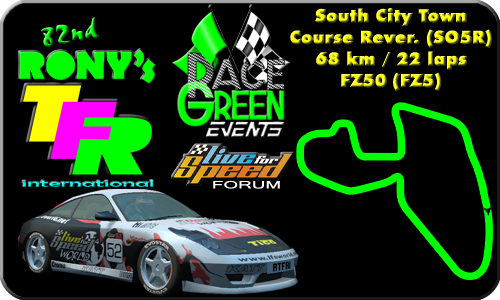 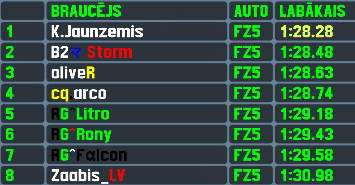 After this race the RTFRi winners club is extended to 35 members - K.Jaunzemis took his first pole position in qualifying and led the race from flag to flag to bring home 24th win for Latvia. He also scored fastest lap of the race to his stats,allthough he just tied previously set fastest lap - this is the second occasion when fastest lap is tied between 2 drivers. The other driver,who has the honor of having fastest lap of this race is 2nd place finisher Arco,who was the only driver in race,who gained positions in race,it was his 1st top5 finish in 3 race starts here,3rd place finisher Oliver repeated the result of his previous appearance here,2nd top5 finish for him. The only driver,who lost positions - Storm - finished 4th,which is 4th top5 finish,Litro never gave any chance to teammates to pass him,so he secured his 24th top5 finish to take over 2nd most top5 finishes status for himself.

As usually 2 weeks break after which we return with some of the slick tyre cars!
bogdani.cojocaru

I'm always viewing this thread when the race day is over. ****ing always!

I'll make sure I won't miss the next one.
Franky.S 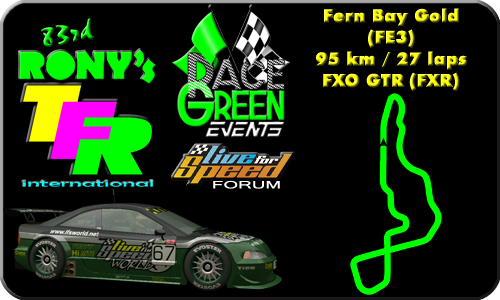 If you mean the statistics, I can open that with no problems.
By the way, I'll join you guys on the next race, I hope I won't do too much trouble.

Good race! Count me in next time, too :-) It awesome, I just can't understand why people don't join these races.

Favorite car, but failed a lot. 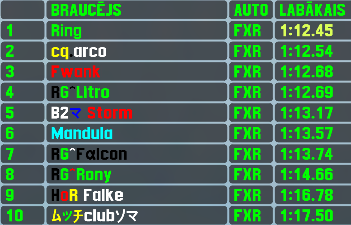 This is the 3rd race in row with a first time winner here - this time polish racer Arco took the glory and joined the RTFRi Winners club as 36th member,after he overtook Litro for 1st place,he pulled away from the rest,scoring his 2nd fastest lap on his way to victory,it was his 2nd top5 finish. The driver,who won the hard race for pole position - Ring - decided to start from last position due computer weakness,he still managed to overtake everyone but the winner to take 2nd place in final results,which is his 1st top5 finish in 3 appearances,Litro held up the chase from his teammate and saved 3rd place,25th top5 finish for him. Falcon finished in top5 for the 16th time with his 4th place finish,but 1st time participant Mandula closed up top5.

In 2 weeks we'll have some racing with road legal cars,stay tuned!
Eclipsed 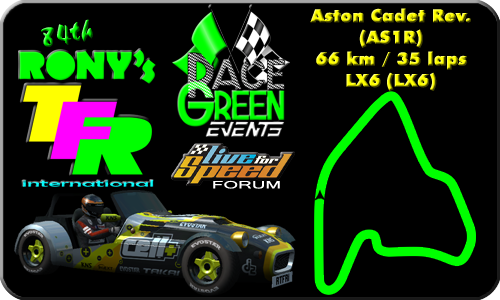 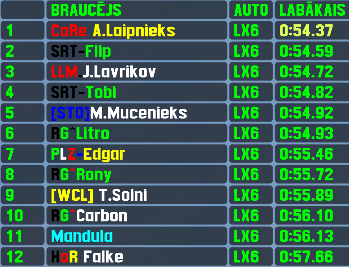 4th win,4th pole position and 5th fastest lap - that's the gain of todays winner A.Laipnieks. He did lose his lead in turn 1 of the race,but the temporary leader had to concede after 4 laps,making free way for winner. It was also his 7th top5 finish in 7 races and A.Laipnieks is now the 7th driver,who has won 4 or more races. After a while the german driver Flip joined this event and with his return he upgraded his previous best 3rd position to 2nd,which was his 6th top5 finish,but M.Mucenieks just repeated his best position by finishing 3rd,5th time for him in top5. Another german driver,who took part for 2nd time in our races,Tobi finished 4th to be in top5 for the first time,but the organized closed the top5 with 36th top5 finish.

In 2 weeks slick tyres will be mounted on some of the faster cars,join to see what we gonna race then!
MandulAA Probably I won't be there, will celebrate a birthday at that time.

Good race and have fun!
Litro