Joined : Sun, 30 Aug 2009 10:09
Posts : 88
Online at :
(FM) FOX Endurance
What a nightmare from start to finish. I apologize to everyone involved... well, that's everyone... for my mistake in the first turn. I simply didn't realize we are already at the end of the straight as I focused on m@ci3k on my right side and was only just getting ready for T1. After that I was a passenger. I have never seen such a short distance from the grid to T1.
Last edited by Botswanan Salama, Tue, 21 May 2019 19:19.
jackson93

@Botsi
Not sure I should feel good or bad about it. One thing for sure, my car skin got your attention.

And then there are those magical walls that shoot you up into the air. I saw 3 flights myself and in 1 of them I was the one flying, unfortunately I ended up on the roof.
michal 1279

Maybe unusual thing, but I'd like to make a protest against myself.

End of lap 3 or 4, don't know exact time.
Katila was in 4th with me right behind him.
Entering the penultimate corner (before pit entry) I made absolutely stupid and unnecessary maneuver onto his inside that forced him off the track and into the lamp post, pretty much ending his chances for any good result.
I know this was not any kind of serious race event, but I feel like I totally deserve some sort of post-race penalty or points deduction for this...
Spiiiky

Rony should ban you for your disgusting heresy
jkat

Joined : Fri, 27 Mar 2009 18:18
Posts : 282
Online in LFS
Don't be too hard on yourself Michal. It was unlucky touch and because nature of the track (not real race track, on which real track can you see those kind of road edges like in BL industry area ? and lamp poles just beside track ?) the outcome was worse than in normal race track.
Even after this incident I could have had decent end result but was also victim of those magical walls, sobis is mentioning couple of posts above, on lap 12 which forced me to pit early and repair fully damaged left front suspension. Summa summarum, just forget it and let's move on.
Eclipsed 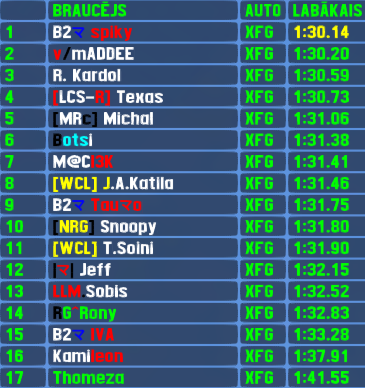 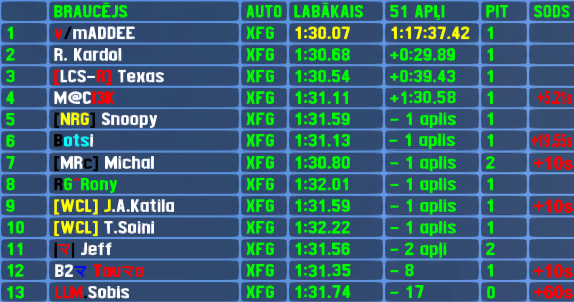 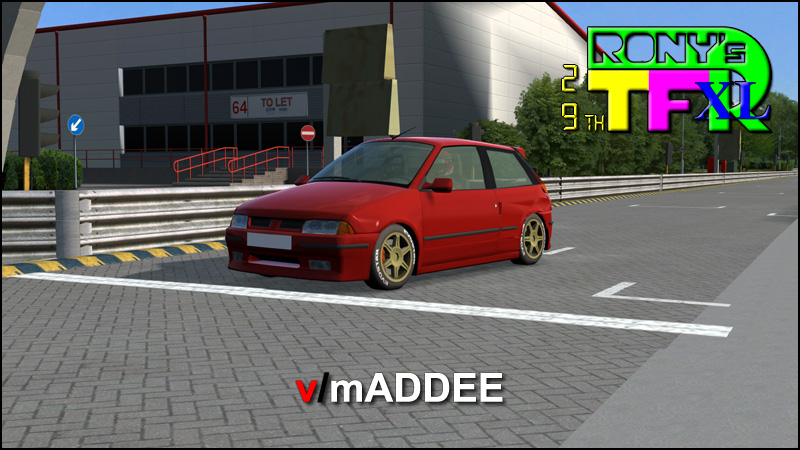 Narrow track and unforgiving barriers was the biggest obstacle this tuesday - barely any overtaking opportunities and relatively minor mistake could make the driver's evening go south in matter of a split second. Still - difficult races are a challenge,the better you perform,the bigger the reward. There were few incidents between some drivers and even few reports,but after reviewing situations,nothing bigger than racing incidents happened. Mistakes happen and there is no need for penalties at such situations unless it's a repetitive behaviour.

2-time winner Spiky was the fastest on this track in pre-race testing and also when it actually mattered - in qualifying,he picked up his 1st ever pole position in RTFR XL,but - he left the position unused due personal reasons. And the 2nd best driver used his chance without being actually challenged - Maddee joined this event for 2nd time and celebrated his 1st win,picking up also his 1st fastest lap of the race and 2nd top5 finish. R.Kardol did find a way past Maddee in 1st lap,but after leading 4 laps he had a technical problem forcing him to let by his opponent. After Maddee's pit,R.Kardol led another 18 laps,but eventually had to give the lead up and settle for 2nd place finish,7th top5 finish for him. Texas survived an incident involving rolling his car,still finished 3rd in final results - still best ever finishing position for the polish driver,who did also improve his best qualifying effort,3 top5 finishes in his account. His countryman Maciek finished 4th and last on lead lap - also best result improvement and 2nd top5 finish. Snoopy finished right behind the leader with 1 lap deficite,5th position for him and 5th top5 finish with it.

* FUN FACT OF THE MONTH :
Despite having almost half of the finishers being penalized,the penalties did not affect positions for most - the only victim was Botsi,who lost 5th position due his too short pitstop. However he would have lost 2 positions,but next driver in results also earned extra 10 seconds...

* CLOCK PITTER OF THE RACE :
Very unlikely for XFG racing,many drivers needed pitwork in this race,but some still finished the full distance with blank pitstop,fastest of them was R.Kardol with 10.34 seconds.

* FIELD RUSHER OF THE RACE :
Only 3 drivers were able to advance in positions,best of them was Rony with +5 effort.

* HONORABLE MENTION :
He picked the combo and had a weak race in it himself and due blown tyre lost a bunch of positions too. Jeff might have learned a lesson on combo choice here.

The winner of this race still hasn't replied about his combo choice for next RTFR XL,he still has time until next tuesday,then the automatic pick will take over. But already next tuesday normal RTFR is scheduled,one of the street legal cars will be used there,more details in the weekend. RTFR won't be the only RGE event next week - 2nd round of the new league STARL is also in the schedule,where drivers will have to tackle the longest course in the season - the custom 8-track exceeds 2km lap distance and is a great challenge for both skill and stamina.
Botswanan Salama

I wonder if I was luckiest person pitting when I did. My tyre popped before I fully stopped for my stop. I started to do some actions preventing that situation just a couple of laps before heading to brand new pitlane by mainly kinda pulse braking.

Would I suffer puncture on track if I decided to pit just one lap later? I suppose we'll never know.
rik97

After that my pace/confidence was gone and started making mistakes. At the end I got my pace back en was gonna improve my best laptime but got understeer last turn and flipped and rolled on the barrier. Managed to get it on it's wheels and finish second.

Also my strategy for doing no pitwork wasn't the best haha. But happy with the points and looking forward to next races.

It was nice race, I was keeping out of barriers nicely and had good fun untill accident with J.Kat who was lap down. It's a shame cuz maybe i could challenge Rik at the end of the race, who knows. Unfortunately that's part of the racing.
Btw My pit stop was faster Rony

Yes,but that clock pitter thing is about someone,who just pits without any pitwork - pits on clock and leaves as close to 10s as possible. Requires just a bit of timing and also gamble - leave 0.01s too early and you lose 5.03s in that race.
Eclipsed 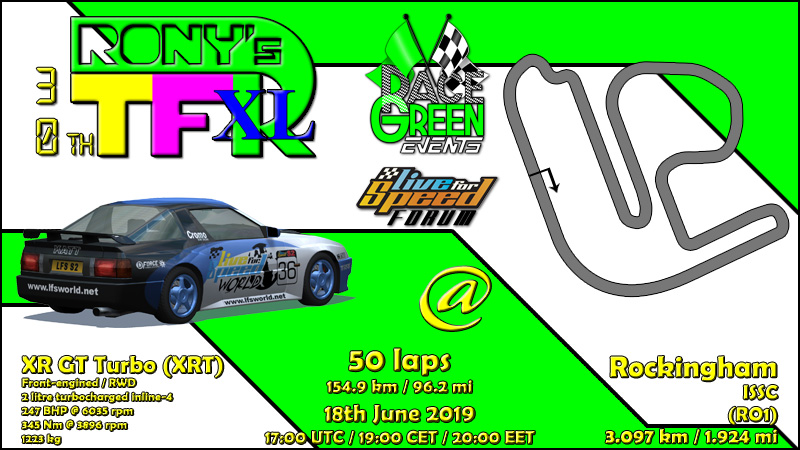 Server is up and running: Ronys Tuesdays Fun Race

(Rony: attached today's replay, if you need it)
Botswanan Salama

Joined : Sun, 30 Aug 2009 10:09
Posts : 88
Online at :
(FM) FOX Endurance
I don't really understand what happened to me in turn 1. You can see from the replay that I'm almost on 25% throttle in T1 and with this car it doesn't make any sense. I don't remember doing that, I was only wondering why my car isn't stopping. I used my DFGT pedals, which are very loose compared to G29 ones, so it is possible that I accidently pressed the gas pedal. Another explanation could be that it got stuck somehow, it wouldn't be the first time. Or maybe I just mixed up this car with FWD cars and an old habit made me press the gas pedal. Luckily no one was in front of me

Why to worry anyway?
Botswanan Salama

Joined : Sun, 30 Aug 2009 10:09
Posts : 88
Online at :
(FM) FOX Endurance
Everyone who are constantly causing crashes should be worried about their driving. But as I said, these two turn 1 incidents didn't happen because of my driving style being overly agressive or anything like that. The incidents don't have anything in common except that both took place in turn 1 and it was just a weird coincidence that they happened in consecutive races.
Last edited by Botswanan Salama, Wed, 19 Jun 2019 15:01.
GT4_PL

why tuesday??? why no Friday-Weekend?
i want play but i'm work in week and back home, no time to play fun event day..

There are many other events being organized on weekends but this is the only race happening on Tuesdays (that I'm aware of).
Last edited by Botswanan Salama, Thu, 20 Jun 2019 15:07.
Eclipsed 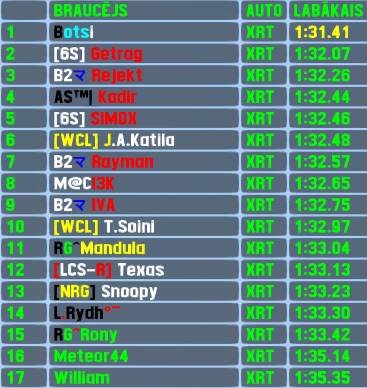 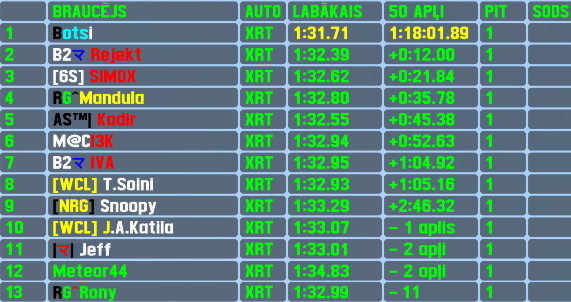 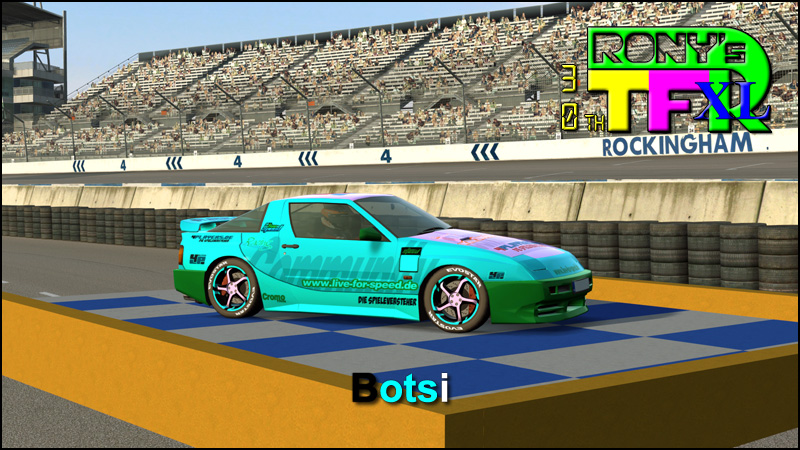 
The automatic choise led this event to visit Rockingham for the 2nd time and use XRT for the first time - a little surprising that car that is relatively popular in LFS has never been picked by someone. The event had over average attendance once again and there was a plenty of head to head racing early in the race before things could settle more.

2019 standings leader Botsi was the one in charge in this event - he set the fastest lap in qualifying with 0.6s gap to closest rivals and with it tied for the most pole positions in RTFR XL history - 4. He missed turn one though and returned to track several positions behind,he pitted right after lap 1 and started the chase from behind. And the chase brought results - despite not leading in the 1st half of the race,the pitting sequence returned him into race lead for final 22 laps - 4th win and also 4th fastest lap on the way,both are also tied most in RTFR XL history. Winner's countryman Rejekt had a day of improvements at RTFR XL - he qualified 3rd (his best position before was 7th and after leading early 19 laps he finished 2nd,which is improvement by 1 position,2nd top5 finish for him. 1st time participant Simox finshed 3rd,4th was Mandula,who also upgraded his best finishing position - from 6th to 4th. The top5 was closed by another 1st time participant Kadir.

* CLOCK PITTER OF THE RACE :
Rony stopped early in pits for 10.15 seconds workfree pitstop,just 0.02 better than Jeff. There were 2 quicker pitstops but both had pitwork (refueling),one of them was "perfect" 10 seconds by Mandula.

* FIELD RUSHER OF THE RACE :
A lot of position changes in this race,best of them was Mandula,who advanced himself by 7 positions from 11th to 4th.

* HONORABLE MENTION :
Jeff get's honored here for the 2nd time in row - his connection experienced problems right in the ending phase of the race,where the only administrative feature of Airio had to jump into action. He could have finished 7th in the race,but at the end it's only 11th due unstable connection.

The XL event goes into it's usual 4 weeks break again to return in 16th july,this time the winner was quick with his decision - 31st RTFR XL will be another premiere of a car,the first appearance of FZ5 here. The selected track is Aston North and the race will feature a round number of laps again - 35. Until then there will be 2 pairs of other RGE events - 2 normal RTFR races,1st of them next week with one of the road legal cars. The other pair of races will be 2 season deciding rounds of STARL - 1st of them in 1st june will feature a 150km race in Rockingham just like this event,but in different configuration.
Last edited by Eclipsed, Thu, 20 Jun 2019 15:25.
123456789
10
1112