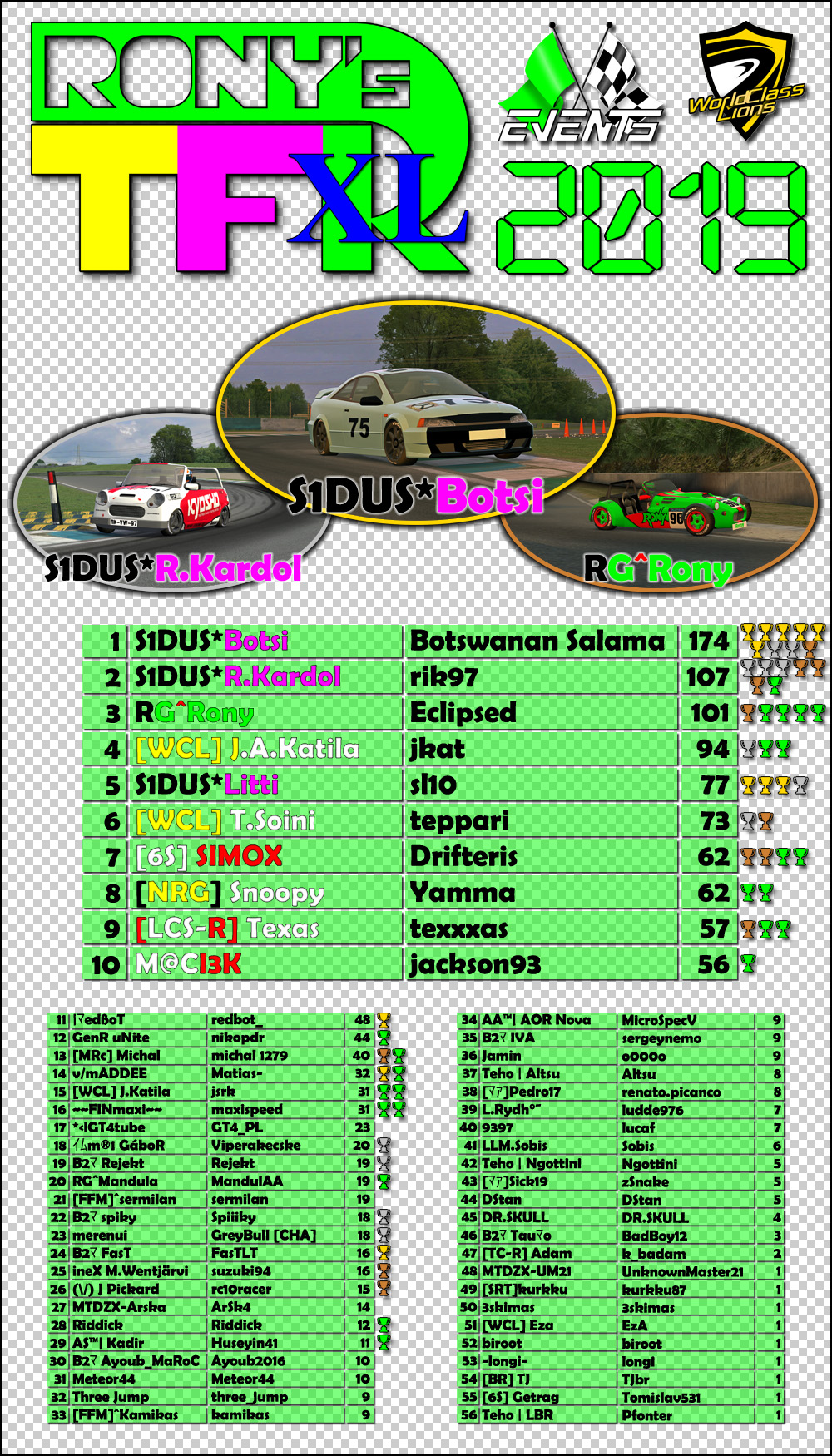 Due to offered sponsorship from World Class Lions team a new "championship" has been created within normal RTFR XL events - the year long total standings. After 12 events this is now completed and winners have been decided. As always,let's look at some numbers first. A total of 56 drivers have scored at least one point during this year,allthough there is no count how many tried. 3 of them scored their only point solely from their qualifying performance. 26 drivers finished in top5 at least once,5 drivers took the winner's glory in one of the races,while also 5 scored a pole position and 5 - fastest lap of the race,but in none of those lists are all same drivers.


RTFR XL 2019 standings winner: S1DUS*Botsi
Alone by winning half of the 12 races during the year Botsi scored enough points to be on top of the standings table,but he also added 2 second place finishes,a 3rd place finish,6 pole positions and 7 fastest laps to his points scoring activities and also he finished 6th on the only custom track of this year. Botsi scored a total of 174 points through 10 races he participated - 67 more than his closest rival.
Best of the rest was another member of the new S1dus team - R.Kardol. The previous race winner completed this year without winning a race,but finished 3 times in both 2nd and 3rd position,whie he added another 4th place finish and a pole position to his achievements. The event organizer lost to R.Kardol his 2nd place only in last race of the year,but kept a safe 3rd place in standings,finishing 3rd once and 5th on four occasions.

The 3rd member of S1dus team Litti also scored half of the wins - half of the year's second half - he finished 5th in final standings. Redbot won the only rallycross event during this season,while his other results were not very high - 11th place in standings for him. Maddee also won an only specific track race - he finished first on the custom layout at Blackwood,14th place for him in standings. The last in winners list is Fast,who took part only in 33rd RTFR XL and won it - the single racewin puts him 24th position in final standings.


There are currently no plans for year 2020 other than keep up the normal racing,but plans might change. There is still one more race left for 2019 standings in normal RTFR - on the upcoming tuesday the challenging Fern Bay Black awaits all the racers with XRG cars,after that similar final standings results will be posted in appropriate forum thread.
GT4_PL

Rony's Extra large FUN Racing serie for year 2019 is now succesfully over and it is time to redeem the promised prices according to agreed sponsorship announcement before starting this RTFRXL serie in the beginning of 2019.

We saw very good and competitive racing in majority of the races and team WCL is very satisfied on the high level of racing along with the fun factor although it may have been slightly more serious than earlier seasons due to the sponsorship stakes involved.

WCL team wants to congratulate all the money prize winners, especially the top 3 who got extra bonus on top of individual races money prizes. According to announced prizing model won prizes less that 5€ will not be paid out so the list of racers getting money prize payouts is following:

As informed in the sponsorship announcement, the money prizes will be paid out with PayPal.
To get your money prize please send your PayPal account info as PM here in lfs forum to me (jkat).


When looking into the future we really want to see competitive racing continuing next year. So stay tuned for announcement before launching the RTFRXL 2020