DUDE! HEY! Where you have been?
MMaijala

Receiving PM via this website is not enabled for this account. Please enable it by clicking on your username on top of the site,settings -> check the box besides "Allow people to send you messages on this website".
CARRERA GT

Sign ups closed for 1st round - all new entries are eligible only for 2nd round.
Currently there are over 20 racers online,if you want to follow race,you can do it via LFSRemote: http://www.lfsworld.net/remote/?host=V8+Racing+League
TFalke55

I'm sorry, but I couldn't make it today.
Eclipsed 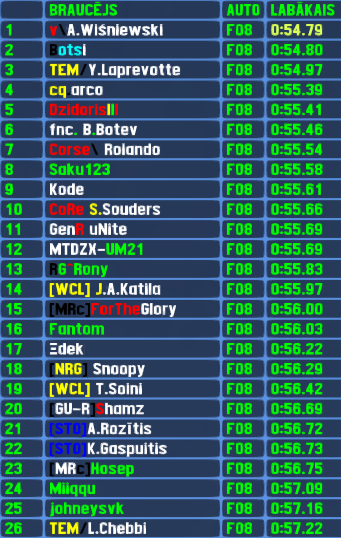 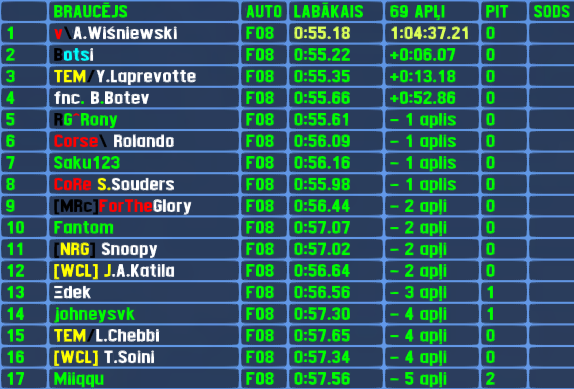 I think there's a special level of hell where you have to drive a damaged car for endless laps.

I got caught up in a couple of other people's crashes early on, but fortunately they only cost me time, not damage. I had a couple of my own crashes later in the race, neither of which really cost me much time directly, but did cause a fair bit of damage to my car. That chicane is soooo treacherous, and the consequences for being just a little off are huge.
Last edited by Forbin, Sun, 1 Oct 2017 21:08.
johneysvk

Interesting race, i've been a lap down ever since i got bumped into the wall at lap 2 and pitted for repairs. Had a few close ones with lapping cars, sorry for that, it's hard to keep track on a track like this, nonetheless managed to have a bitvof a fight at the end which was fun
przemek21061995

Well, I simply knew it.
Zaabis

I wasn't able to use my sim-rig, so I really came just for the attendance points. Hoped for at least some points, but I forgot to switch to my personal net, so I chose to spectate before I ruin any more races.
Eclipsed 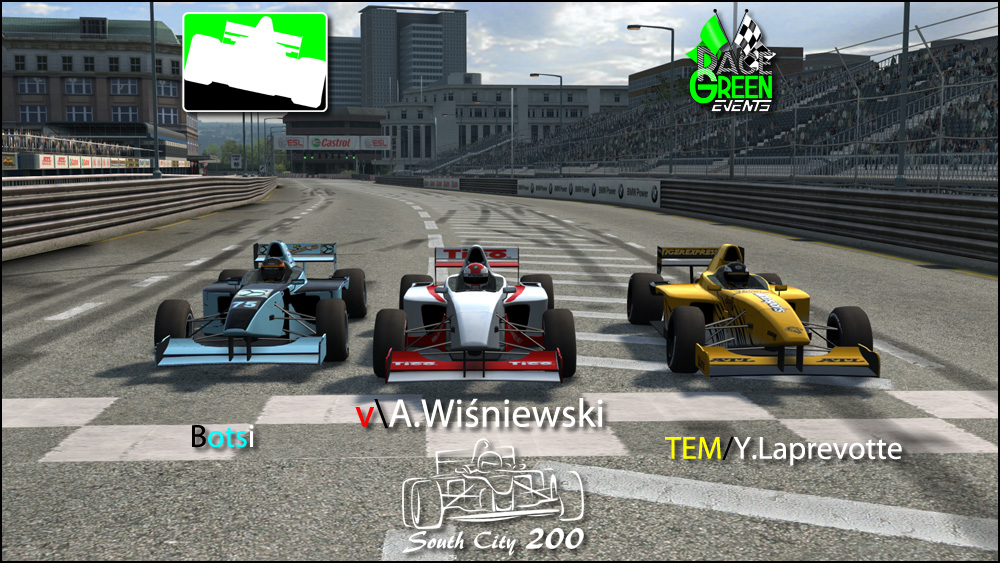 The VERL champion of 2016 A.Wiśniewski continued in the 2017 season right where he left off. Well,sort of,as he did not won the last race he participated in,but still - he set the best laptime in qualifying beating the closest rival by just 1 hundreth of a second and he led all 69 laps of the race,setting also the fastest lap of the race,earning all 17 possible points towards championship. This way he sets the course on becoming 1st ever double individual champion in any Race Green Events returning series. 2nd place was taken by Botsi - he was close to the race leader,but the track configuration does not offer any really easy overtaking chances,at the end the gap was 6 seconds,another 7 seconds apart was the 3rd fastest racer of the day - Y.Laprevotte. The leading trio never was really challenged by the rest of the field,as only one other racer finished in the lead lap.


Round 1 is just 25% of the series,so you can't predict much yet,but some outlines of the big picture are already visible. Currently the standings are exactly as 1st round finishing order,except the gaps are a bit variating - A.Wiśniewski has now solid 5 points lead over Botsi with Y.Laprevotte another 2 points behind.

Teams Championship has slightly different situation - Vires racing leads by 6 points over Tiger Express Motorsports,while Fast And Crazy SimSports is another 3 points behind in 3rd. But due multiple participants for most nations,the Nations Cup seems the most challenging one now - Poland leads by just 1 point over defending double champions Finland,Greenland and Bulgaria following with 8 points gap to leaders.

With 26 starters this was the most attended VERL race ever,probably the activity will sink a little as 2nd round of the series will be held in custom built racetrack layed out in container storage facility near Blackwood actual raceway. The 2.6 kilometer course is very wide for the most tracklenght,but still features few tricky single line sections. Despite being build on practically flat field,course still has few uneven parts with potential of unsettling cars when power not carefully applied. Everyone has 2 weeks of practice now - who will be the best to adapt to different track?
Last edited by Eclipsed, Tue, 3 Oct 2017 10:13. Reason : No,it does not!
johneysvk

the link points to the 2016 spreadsheet

Thanks for MPR file. Wow nice to see such group of pro drivers. Watched almost full race.
1
2
34
This thread is closed