The FOX somehow doesn't attrack too much drivers in RTFRi,but still,there was a lot of racing,but the pole sitter,fastest lap setter and winner Niki Ðaković had a quite lonely race as he led all 20 laps on his way to his 3rd win of the RTFRi to stretch the Reno/Niki-only won series to 7. He is also 2nd for most pole positions and tied for the most fastest laps of RTFRi. Raptor's Paddi had to fight through the field from last starting position to take runner-up spot,missing on fastest lap just 1 hundreth of a second,Flame had to surrender his position to Paddi to take the last step on the podium,which was his 4th top5 finish.

Yeah buddy. One of my favorites. And I hope Paddi joins us next time. He's very fast and I'm sure we'd have a lot of fun if he does qualifying.

Shame Reno didn't dare to touch this single-seater. The track was very well suiting for this formula.

This track felt almost like some Aston GP with FO8,just mini version,somehow I thought it will be a good idea.

Anyway - got my lazyness beaten,updated Event rating and other statistics - Niki still leads rating and I'm now tied for most top5 finishes with Kars,and this race got right in the middle of closest finishes chart,everything else new already said.
Eclipsed 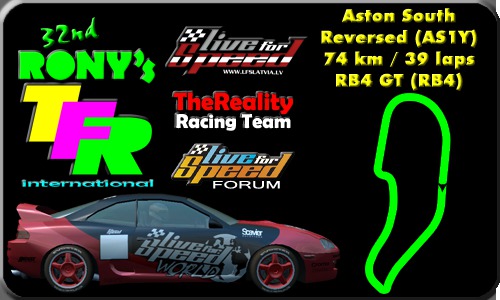 A 1.9 kilometer track which features practically just 4 turns is up next for RTFRi racing - it's Aston South Reversed configuration,using Aston Cadet Reversed starting grid. The fancy part - there will be practically no run to 1st turn as it's right (to the left side) after start line! Using the 243 horsepower all-wheel-drive RB4 will make this quite intense race with need to watch out for your tyres as the front left will have to carry most of cars weight for significant amount of time during the race. Cutting over speedbumps in the chicane is legal until moving objects (bales) as usual,but use it at your own risk - the dampers tend to be worn after too much cutting!
Remember - turn LEFT when exiting garage! Drivers joining track from the short way (exiting pits to right) will loose precious practice/qualifying time while rejoining server!

Btw, will the server be password protected, and/or where i can find it if it so?
Eclipsed

Joined : Wed, 12 Dec 2007 12:58
Posts : 5456
Online at :
AWD Winter Series
There will be no password until end of qualifying. Between qualifying and race server will be put under password and it will be notified via rcm on screen (as chat is visible on remote) as usual!
-RitariÄssä-

If i may request, some open wheeler would be nice at some point :3
andRo.

There was an open wheeler last round and 3 rounds ago. 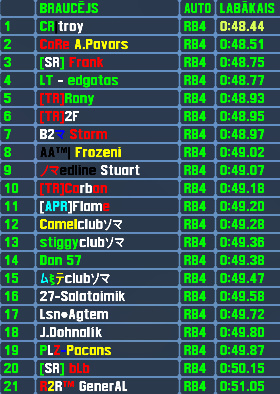 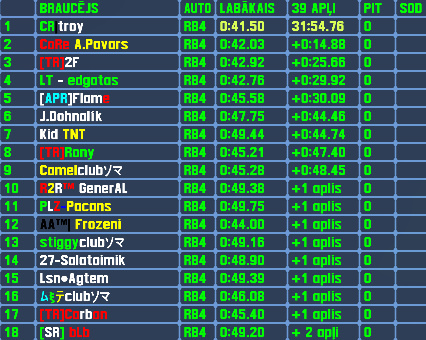 Fastest lap times are corrupted due to fact that 1st lap happened to be shorter then all other.
After checking data,fastest lap ot the race: CR|Troy - 0:49.01

Troy still is unbeaten - it's the 5th time he joins this event,and after leading every single lap,he scores his 5th win (still 2nd most),taking also his 5th fastest lap (tied best with both Reno and Niki)! Runner up was Core's latvian driver A.Pavars,who had his 5th top5 finish in 5 appearances,while 1st time participant and freshest S2 licence owner in our TheReality Racing Team - 2F put himself onto the last step of podium. Another 1st time participant Edgatas from Lithuania came 4th in finish,5th with his 5th top5 finish - our dear modarator Flame representing Angel Power Racing.
This race put itself into RTFRi archives with the 2nd most finishers so far (most was with other TBO car at other Aston open config track - pattern?),while Troy had put himself into most laps led standings in tied 2nd position.

After 2 weeks we hopefully (there is a chance that event might not be held due to personal reasons - TBA) race a car with slick tyres,but no,Frozeni,it won't be a single seater,as they were used in last 2 slick tyres races as Andro already noted,since I try to vary cars as much as possible.
Last edited by Eclipsed, Sun, 18 Mar 2012 14:47. Reason : Picture link update
-RitariÄssä-

Darn, oh well.. i guess it's a good thing to have some variety

Overheated front left really killed me that race, i dont know if it's just my lack of skill with tires though..

Anything with slick tires is awesome though since you can take r3's or such if youre having problems.. 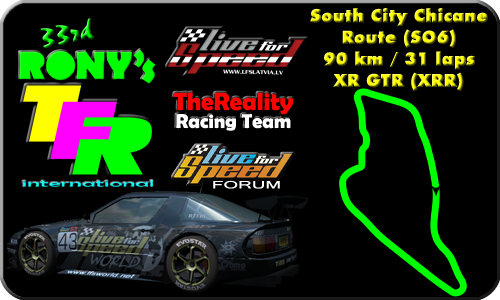 31 times around few blocks of a city - this won't be an easy early evening drive,as the car for this is the 490 horsepower XR GTR! The track is called South City Chicane Route and it features 2 fast straights,few slower corners and the narrow chicane where the race can be lost easily with slight lapse of concentration! Car has a lot of grip and pretty much power - all you need to cover this 2.9 km course in less than a minute,can you do it?

I'll try to update all of them soon.
stevenkelman

sorry for being a noob but what time does qualy and the race start in gmt ?
Eclipsed 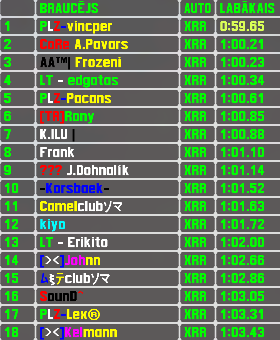 Well,this went totally wrong,I can blame only myself for poor combo choise,as fast cars and tight city tracks usually ends in quite a mess. Unfortunately drivers managed to completely block the track with cars... Twice...

Lap one mess was caused by 2 mid-field drivers who somehow could not share the track with each other,one spun other,the rest of field made a huge Nascar style pile-up. Can't really find the one to blame,as both had their share of guilt,so no penaltys will be enforced,as there will be no use of them anyway.
But after all these incidents,we still have a winner to congratulate - his name is Edgatas and he is now the 16th member of RTFRi winners club,scoring the first win for our neighbours Lithuania! He took the lead in lap 11 and held it until the chequered flag,setting also the fastest lap of the race. This race was unique also in some other ways - it was the first RTFRi event where the polesitter didn't even start and due to very much incidents,this was the first race where less then half of started drivers didn't finished (previous worst was 50%,also in SO Chicane Route,just reversed).

This is the part of usual race recap,where I'm saying about the next race,unfortunately I can't say anything this time - due to personal reasons this semi-weekly event will take holidays for a while - if everything goes really good,it will be 3-4 months until return,if not good - ah,we'll see.

This has nothing to do with current state of LFS developement (like some other moaners quitting because there is no new content etc.),so keep racing other events,I will too until I will be able to do so!
Thanks to all participants,especially the clean and fair ones!

I hope you have a good time whatever you're doing next few months..

Looking forward to join the racing again as the time comes.
Cornys

Hey Rony, why is there a 34th RTFRi scheduled for Tuesday?

Does this really mean they are coming back!?
Flame CZE

I would also like to see this series to return.

After 4 months of absence,the semi-weekly fun event is returning! Allthough a bit later then I wanted (1st tuesday of july) as there were some unexpected problems with banks in my new home country and the usual annual 500servers problems later,but finally everything is settled for restarting the event. So... 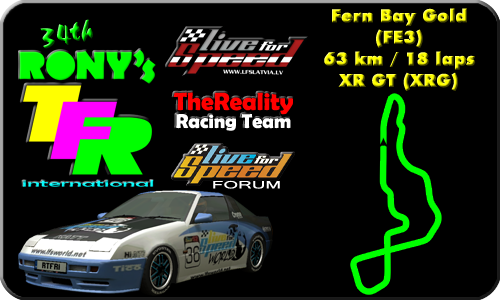 This feels like quite a classic - one of the most popular Fern Bay configurations (the 3.5km long Gold) will be raced with one of the most basic cars - XR GT. Even if 140 horsepower rear wheel drive car for the most experienced racers will feel underpowered,everyone still will need to work hard to handle the car without unnecessary sideways action. Tyres ussually aren't a problem for this car,so expect 100% performance for the whole race!

Server is already up and running and it is kindly sponsored by Team Rock Racing!
Ronys Tuesdays Fun Race (airio is connected)

Have to visit this one and let my teammates know

Awesome, hope to be there 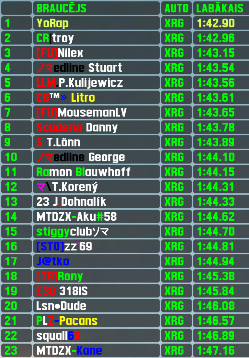 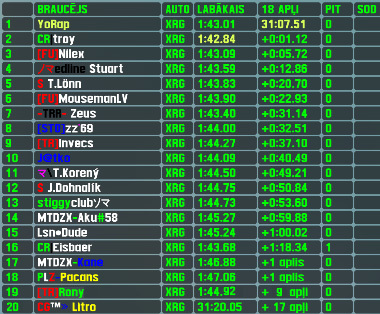 Statistics / Event rating and other statistics (will be updated tomorrow evening)

Return of the event was well crowded and race was close as usually in slower car races. This race goes into statistics books as the one that broke Troy's unbeaten streak (5 wins in 5 appearances) - the finn YoRap led the race from flag to flag,but finished just 1.12 seconds (4th closest finish ever) in front of the swiss iFlip master and it was his 2nd podium finish in 2 starts (other was runner up position behind Troy with other STD car,also starting from pole position). He is now the 17th member of RTFRi winners club. The last step on the podium i taken by 1st time participant from Croatio - Nilex,while Redline's Stuart took his 2nd top5 finish finishing 4th and the swede T.Lönn representing Savage Racing colors rounded up top5 in his first race here.

Next race will be already next week due to need for shuffling weeks and it will be run with faster cars using slick tyres!