There will be to add some bumps but it's a good start.

I hope in next months that will be released officially.
Hoshimodo

Wow, great looking track. Is this a RSR-only beta or is it available for public testing?
Shotglass

oh great monza in a game where the most powerful car has about 50 hp thats gonna be... exciting
Hoshimodo 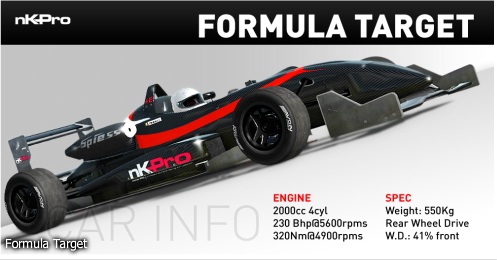 Mugello is not a public release for now, i hope in next months it will be public.
For now it's open for internal RSR Champs and for beta tester.
For example is near to start a F1800 Champs where will be used this new beta tracks and all partecipants could download these tracks.
mblixt

BUMP.
how can i get my unlock code back ? newly formated hardrive so dosn't have any codes left
StableX

Any chance that we can get Fiorano to work on NK Pro fiddling with its files?
DeKo

I was thinking backwards to this, would be good to put NKpro tracks into the Ferrari simulator, would make it worth buying

Meanwhile you could try Dijon Prenois wich was released a couple of days ago at the GPC forum. This track is awesome to drive with the FF1600...couldn't stop hotlapping for hours this evening

In fact i was quickly disappointed with the FVA pack. 15 euros for hotlapping in a F10 on Fiorano?

Does anybody know if Fiorano can be transplanted to NK Pro?
michele0676

It's impossible, the same for track.
New code structure in FVA ...
migf1

Guys, am I the only one who gets Race Studio 2 Analyze Software crash almost every time I try to Import an nKPro telemetry file? Actually it crashes when it tries to save the .drk file (right after importing the .ntk file). It works seldom and randomly however.

I'm wondering if it has something to do with the way the file telemetry_dump.ntk is produced. If for example I go into a server and I just spectate, will the game produce a corrupted .nkt file? Or is there any specific procedure I should follow online, in order to make sure that the produced .nkt file will not get corrupted or something? Or, can't I import a telemetry file which is not produced by me (if I have download it from the net or a team-mate has sent me his, for example)?

I'm trying for 2-3 days now, with no success. The very first time I did it, it worked on WinXP 32bit (the .nkt file was produced on the very same machine). It never worked on Win7 64bit though (although I was always trying to import .nkt files produced elsewhere... on my WinXP machine for example).

Any help or pointers to the right direction would be very much appreciated!
Hoshimodo

Did anyone notice the new netkarPro front page?

Too good to be true, isn't it

Now, that made my day!

Can't be an f1 car, front nose is to far forward, rear wing to wide.

Could be an indy car but i am useless at guessing.