I agree! However it doesn't give the big picture about the curved straight. In that shots it gives an impression that the pink car goes on the yellow one. If the straight was absolutely straight, that would be true. But in that specific case no-one takes such driving line that yellow car took. But time to let this case in history and look forward

Nice report again Nova! I'm sure these kind of reports raise the interest to the series. And I know it takes time to write such ones. The MPR was great to watch from the start to the end. Last lap fight for podium positions was epic! And GT4 was once again running that hilarious setup, I laughed so hard while watching it, because he drove it really well and did serious job behind the wheel xD.
Last edited by lucaf, Sun, 16 Jun 2019 10:30.
MandulAA

Awesome report, great to read and recall events - great effort. I LOVE the heli-cam GIF, that looks awesome. Keep it up, I really enjoyed the race!

That's great, make sure to schedule upcoming rounds so potential players see it on the top, as an active (and awesome

What a pro helipoter camera!.

add "YOU DIED" from Dark Souls in the end and it will be perfect https://www.youtube.com/watch?v=j_nV2jcTFvA
MicroSpecV

Yes, it was fairy nice to watch the race again and catch battles I missed - I have to say the Simox did very well today, coming from Cruise background he has the pace and it will be interesting to see if he can try to close the gap to the top 2 in the standings

Also yes! GT4's civilian set up was crazy, just like in Broker Hill, I do not know how he controls it, amazing
MicroSpecV

Experience NASCAR in LFS! The Martinsville Speedway is now loaded on LRL Layout Racing server for this weekend only! Hop on to have a try! 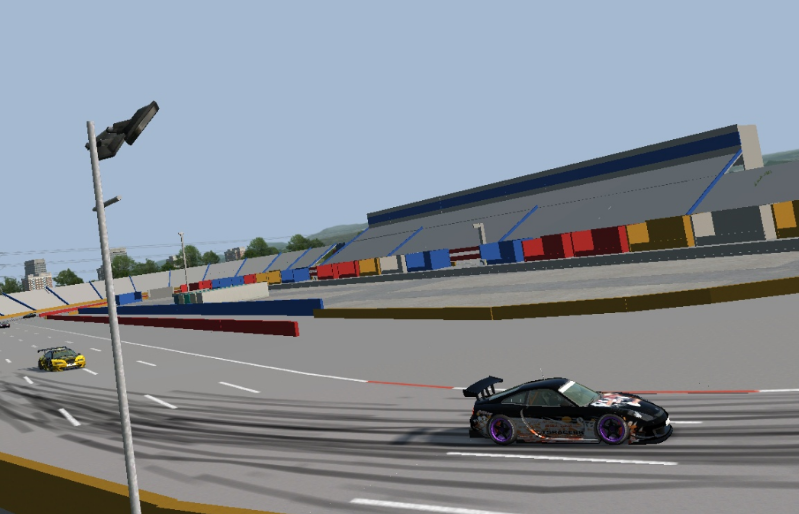 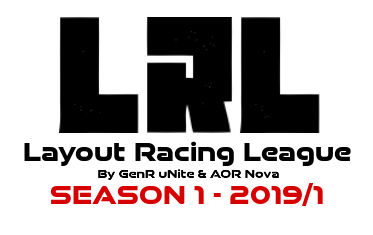 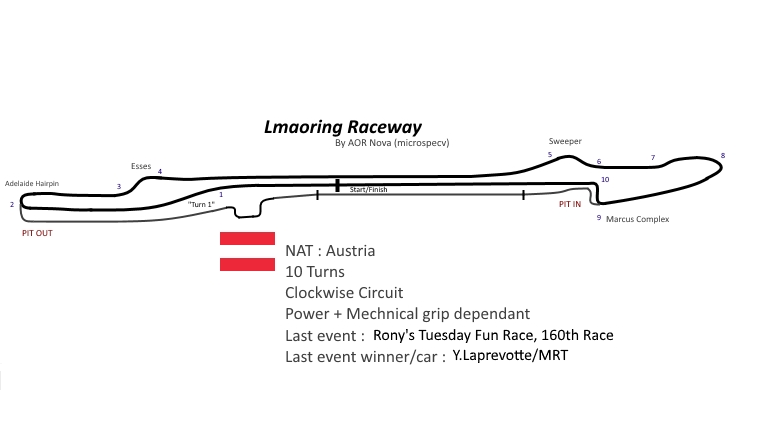 *Update*
A minute's silence will be observed prior to grid for Race start today at the Lmaoring.

Marcus Kane, or [LCS-R]Marcus.K as he went by, was a racing driver who contributed to the LCS team and participated in races and the LCS UF1 league back in 2016-2017. He was known to be one of the calmest and most precise drivers the drivers raced with, and he proved the point by winning his first race in the LCS UF1 league on his debut race.

We lost him in 2017, when he was involved in a fiery car accident, of which he was not able to survive. We all know you are a lap ahead of us, rest well, Marcus.

In his honor, the Lmaoring had a stadium built in the last sector; better known today as the Marcus Complex.

That was frustrating. Rift software crashed and LFS crashed with it. Pitty, I was enjoying my fight back to the front. Apologies to Katila for that tap, misjudged where you were going to brake and that was that.
lucaf

Wish I could have been there

there was actually two XRG's flipping in tandem, but the later one spectated immediately (its displayed in the gif for only a fraction of second)

The whole race ended too fast. It was getting really hilarious with all the crashes and safety cars.
Last edited by lucaf, Sat, 29 Jun 2019 20:52.
MicroSpecV

Heading to Austria for Round 3 of the LRL Championship, we see drama and amazing racing, with key incidents and a fumble at the top of the table! A well-planned strategy sees Trespasser take the race win for the second time in his LRL career! 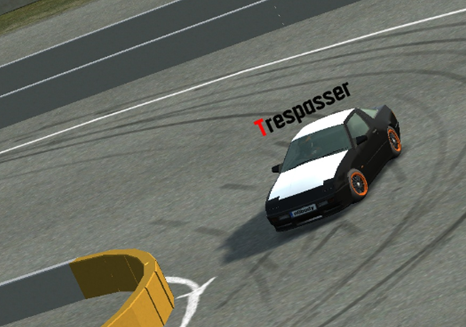 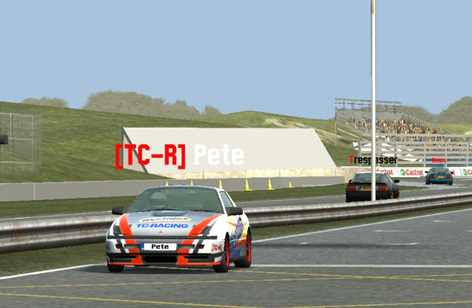 The short punchy circuit proved a challenge for most drivers, nailing the corners being key to gaining lap time. Trespasser set the early pace, with Lydh in his XFG driving the lap of his life to put the underpowered shoe box up into 3rd, ahead of rivals AA|Kadir and fellow XFG racer, [LCS-R] Texas. [6S] SIMOX placed his car in 6th, just 7 tenths off the lead. The midfield , headed by 9397, was extremely close, further giving us a glimpse of the action in the race.

Surprisingly, it was [TC-R] Pete who put in the fastest lap of the session right at the death, pipping Trespasser by under a tenth. Further down, surprise returns to racing by [LCS-R] racers Wax and Ltras saw them qualify near the back in 15th and 16th, just besting Cruise hero GT4Tube. 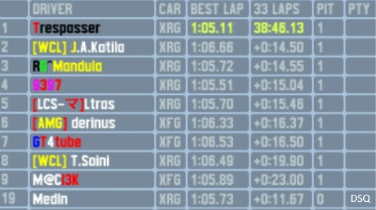 
Round 3 and drivers put their patience and grit to the test at the tight confines of the Lmaoring! 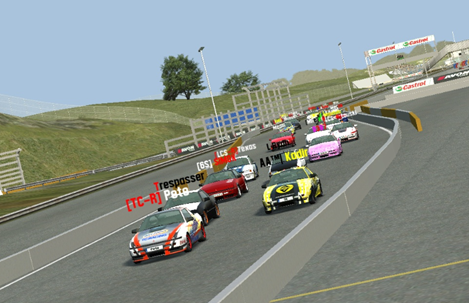 Lights out, and away we go!

The start was once again clean, with Pete leading the furious charge down into turn 1, with Lydh losing out in the run with his XFG, and SIMOX powering past down the inside. Further down the back, the slow-starting Medln saw [LCS-R] Lauski and [MRc] KIG sweep past him, which would prove to be one of two turning points in the race, with the field compressed heading through the first lap!

The worst case scenario down into turn one became real - Trespasser having a go under braking and drawing alongside Pete, however, an overly ambitious [6S] SIMOX misjudged the braking point, tipping Trespasser into Pete who goes for a spin, directly in front of the 19-strong pack! Avoiding action followed, with Lydh having no-where to go, hitting Pete once more, with cars scattering left and right as the field marched into the Esses. 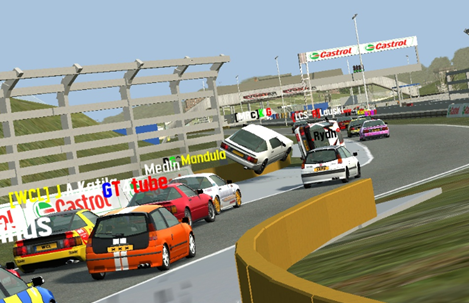 The first Safety Car produced by this incident

The fast starting Lauski had a huge tankslapper moment as he exited the Esses, over-correcting his car and sending him straight into the Castrol wall, with [MRc] KIG going off at the same point in sympathy!

Heli-cam over the Lap 1 pile-up

The incident saw a pile up as the drivers weaved their way through the field - Lydh and Derinus suffering damage along with the championship leader, Pete. Both cars involved in the initial incident retired on the spot, with Lauski unable to pace shown earlier during the Practice sessions.
The safety car was called, sparking a flurry of pit-stop activity! 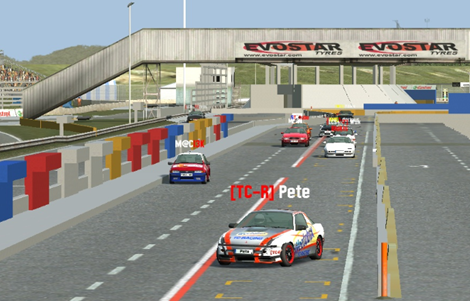 Majority of the field taking their compulsory pit-stop

End of Lap 1 and the deployment of the Safety Car saw the pit-stops take place, with most of the pack opting to clear their pit, with SIMOX, Texas and Kadir the leading cars who chose for the alternate strategy, staying out for track position. Trespasser pitted and rejoined in 4th behind Kadir, with RG Mandula, [WCL] Katila and Pete - who had already recovered to 8th, right behind. SIMOX was slapped with a Stop-And-Go Penalty for the earlier incident with Pete at Turn 1, of which sadly turned out to be the end of his race, getting stuck in his pit-box with a LFS glitch.
Weirdly, Texas and Kadir pitted on the second lap under Safety Car, dropping to the rear of the field and promoting Trespasser to the lead after SIMOX's retirement. The battles after the restart

The race restart saw the field spread into place, as the drivers passed each other and found a rhythm for the middle part of the 33 lap race. Pete fought Katila down into the Final Hairpin, both coming into slight contact, with a clumsy spin by Katila after both tried to catch their own cars; deemed to be a racing incident. Battles for position were all around the order, with Texas fighting with Medln for 5th, and [WCL] T.Soini passing Blokis at the back.

Lydh's great qualifying and run in the top 10 came to an end after sustaining damage at the final chicane, retiring his XFG on lap 12, pointless here in Round 3. Meanwhile, a train was forming behind 5th placed Texas down to M@CI3K, as well as GT4Tube, who was holding down 10th ahead of the recovering [LCS-R] Ltras. GT4 would go on to finish a respectable 7th in the race, with the latter claiming 5th for LCS-R, a great tribute to Marcus Kane. 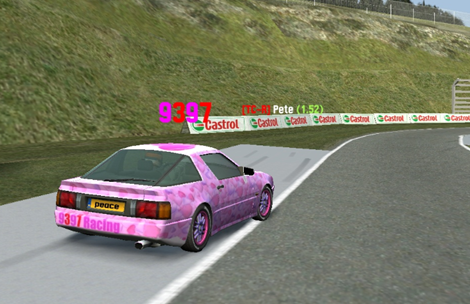 The unexpected for the championship leader, Pete

Lap 15 saw the retirement of [TC-R] Pete following a technical glitch with his Rift, crashing his game and taking him out of the race from a strong 2nd, after pulling a move on 9397 a corner before. With his retirement, he scores 0 points, gifting Trespasser a huge lead in the championship. Will Pete be able to recover? 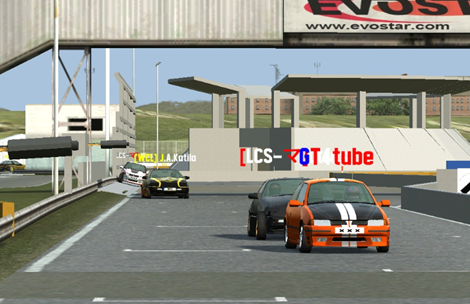 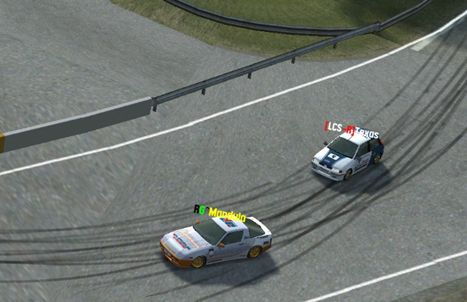 The battles during the middle stint of the race

The field spread saw few battles as the race tipped over the half-way mark, with Ltras getting past GT4tube down the main straight. With less than 10 laps to go, Texas was slowly closing down on Mandula for the final step on the podium, however, his charge was halted with a rollover by [LCS-R] Wax at the final chicane on lap 24, right on the exit; bringing out the second and final Safety Car of what had been a very exciting and close race thus far.

Lap 28 saw the Safety Car come in to release the field for the final 5 laps, with Trespasser leaving nothing to chance, dropping the field as he stormed away in the lead. Down into Turn 1, 9397 broke a little too late, and Trespasser, having run wide, was collected, with 9397 coming off worse and spinning around in front of the top 6, with Texas somehow emerging in P2 ahead of everyone else.

What followed was an intense battle for the second step on the podium between 6 drivers, with Medln and Katila barging through ahead of Mandula and Texas, with the battle stretching all the way to the flag. 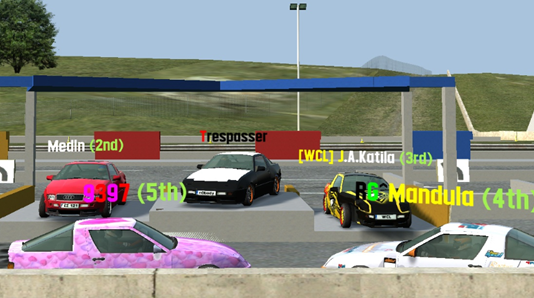 Up in the lead, Trespasser crossed the line in 1st with no challenge, claiming his second win to boost ahead of Pete and the rest of the drivers in the championship. With the disqualification of Medln, Katila and Mandula took a well deserved podium ahead of 9397 and the newcomer, Ltras.
With the fastest lap going Trespasser, his unassailable lead in the championship will be hard to take down. Can anyone do it?

Driver's Championship as of Round 3 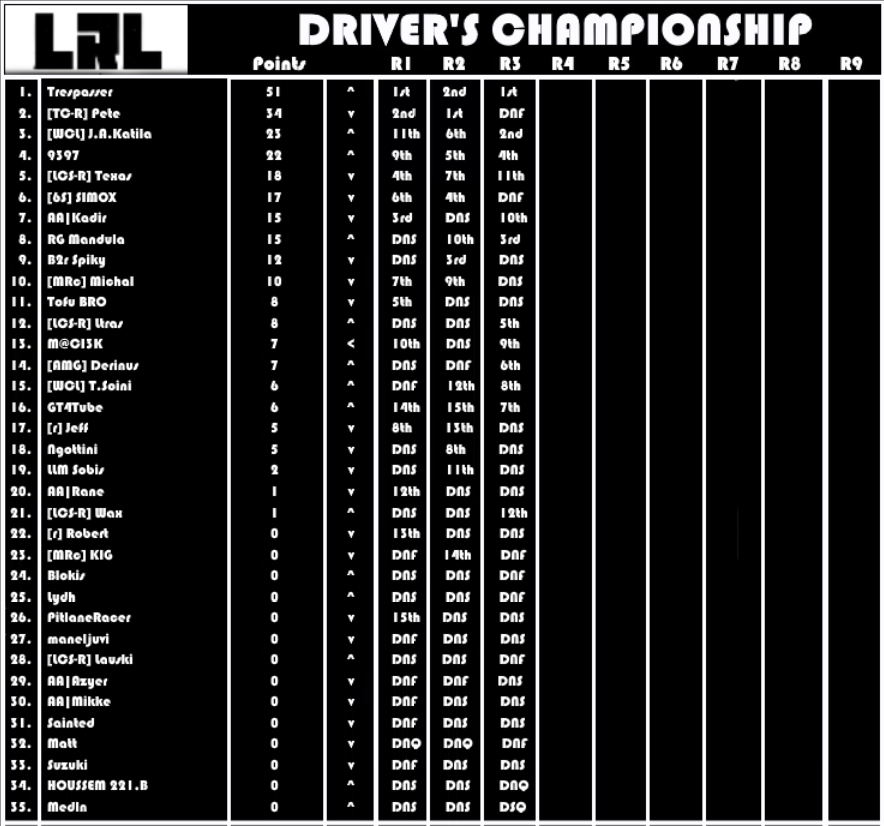 The triple header has just started - see you for the next race this coming Saturday, 6 July 2019 for Round 4 at Scawen's Racetrack!

LRL Got some epiclip will on Epic replay part 61 next weekend see ya!
mbutcher

Nice write up. I've got it all to do now to challenge for the championship. Bring it on.
MicroSpecV

You go mate! Close that gap down. See you and everyone else for Round 4 this Saturday, 6th July!
Pathseeker

Show me what you got.

The test race we had before is missing as well. But now I have one drag race in my lfsworld stats, so I believe it was recognized as drag race instead.
MicroSpecV

Yes Spiky is right, I believe the Lmaoring track saves the races under the Drag strip, check your LFSW stats, it should fall as one race in drag, if not...

Round 4 confirmed will be this Saturday 6th July at the Scawen's Racetrack circuit.

Mid-way in LRL's triple-header! Many overtaking opportunies, and a enjoyable driver's circuit! 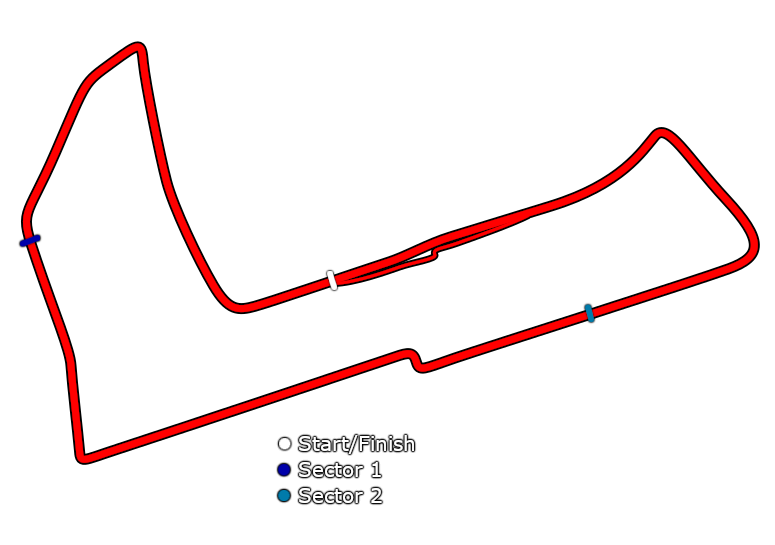 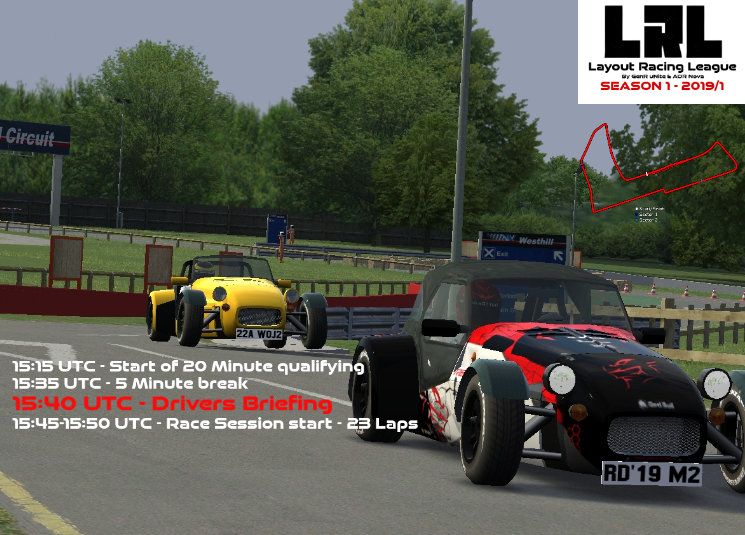