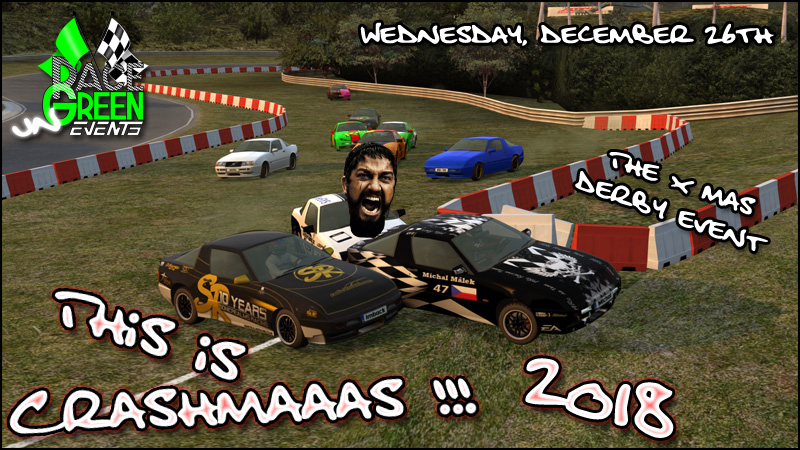 Got some rage after a race?
Are you mad to someone?
Want to put your anger on someone to see his car upside down?
Want to release some steam while racing?
Or you are just naturally aggressive driver but all events too soft for you?


For 7 years we have been smashing cars at this time of the year,this year will not be an exception,so for the 8th time - Race [un]Green Events presents: the chance to take your 140 horsepower rear wheel drive XR GT and don't feel sorry if you happen to destroy it - because this is an event where you have a risk to get your car finished before crossing the finish line. The event will have only few basic rules regarding behaviour on track,otherwise - feel free to impress your opponents physically,divebombing and P.I.T. maneuvers more than welcome! Event will consist from different parts - qualifying,where each driver just sets his laptimes to decide starting places,heats,where the fight starts to get physical for the chance for final,the final,where best will be decided and a bonus run,where everyone will get a final chance to let out rage on masses!

The event starts 18:00 UTC / 19:00 CET / 20:00 EET with hotlap qualifying,everyone who wants to take part,should be in server before the start of it,but arrival deadline is 20 minutes after start of qualifying (it's the minimum lenght of it),everyone who comes later will be able just to watch and take part only in bonus run - noone without qualifying will be allowed to take part in main event.

Seeing the activity in track updating,probably for the final year this event will use the Bullring in a shape as it has been for 7 previous years with minor updates. So let's say a proper farewell to old Fern Bay and look forward to opportunities brough by new one. 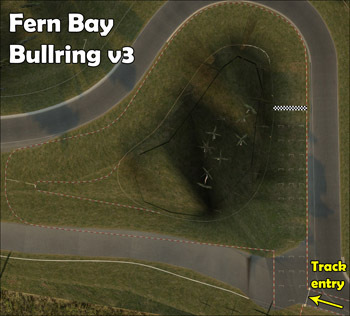 (click to see bigger image)
The track surface is 99% grass (not that the 1% of tarmac would make much difference anyway),one lap is 330 meters long and width variates from 10 to 20 meters and it even has a slight elevation! Layout file can be found as attachment from one of previous year's thread and in server when it will be online,feel free to have practice runs to be familiar with track or just store the layout for own needs.


Now some information about the parts of this event:

Qualifying:
The hotlap qualifying will be used here. Every driver will have 1 outlap and 2 timed hotlaps,the best lap counts as per standart LFS qualifying. The order will be decided by connection list - from top to bottom,late joiners will have a chance for their run after initial order. Each driver will receive 2 simple commands from race administration:
[drivername] - join - driver joins and stops his car right before entry of track (right before the yellow line)
[drivername] - go! - driver enters the track for his qualifying run
Everyone else is expected to stay in spectators until called for his run! To speed up things,we will run 2 cars on track at same time. Track is just over 20 seconds long,this means cars will have around 10 seconds between them,so noone should disturb other driver normally. But in case someone spins and loses a lot of speed,he is expected to allow other driver to pass in case he is near behind!
Qualifying will determine starting order for most of runs!

Heats:
Heats will be 10 laps long and will be used to determine drivers eligible for the final. Heat run amount and levels (as semifinal or quarterfinal) will depend from number of drivers taking part,but every heat will be run with no more than 8 drivers,best 2 finishers atomatically qualifies for next level (final or semifinal),except the last chance run where more drivers could start if needed and it will be just 6 laps long!
For example - if there are 13-24 drivers,all will be divided into 3 heats (from qualifying results - 1st in heat 1,2nd - heat 2,3rd - heat 3,4th - heat 3,5th - heat 2,6th - heat 1,7th - heat 1,etc). Best 2 from each heat qualifies for final,the rest will run in last chance run for remaining 4 postions in final.
If there are more than 24 drivers,the first round of heats will determine best 18 to take part in semifinal heats which will be run just like in example.

NOTE - before leaving unhappy after first failure,it's worth to remember that everyone will have 2 chances to qualify for next round! So if you fail to make next round during your quarter- or semifinal heat,you'll have another chance in relegation/last chance run!

The final:
The final is the run where the event official winner will be decided - it will be 20 laps long and only best 10 drivers through qualifying and heats will be able to fight for bragging rights! The starting order will be decided partially from heats and qualifying - for example if there were 3 heats,all 3 heat winners will start from top 3 places,order for that will be determined by qualifying results,all 3 heat 2nd place finishers will take 4th-6th places on start with same ordering,last chance run qualifyers will be ordered just by qualifying results.

The Bonus run:
It's the ultimate carnage - everyone in server will be able to take part in this 20 lap run,the best part - starting order will be random,so you could only blame LFS randomizer for a bad starting position. As usually bonus run will have some new layout additions,some a bit experimental,some pretty much classic,some might put you out of race,some will help you to put others out.


Even this is a almost rule-free event on track while racing,the event format asks some tough admining,so everyone is expected to behave in server and follow admin's instuctions and these guide lines:

Starting of a run:
...was a quite tricky stuff in earlier events,but since LFS v0.6H there is an option to create custom grid. This means everyone will be simply gridded in default formation - 1st position is on left side,2nd in middle and 3rd - on right side of each row.
Make sure you don't jump the start as LFS will either give you DT/SG penalty or even spectate you - penalty will be replaced by 1 lap penalty,while spectate will mean that your heat is over!

Racing rules:
Everyone is expected to follow clean racing rules... Yeah,right... This is crashmaaas! There are only these basic rules:
1. No wrong way driving - just anti-clockwise direction on track! In case you get spun heading wrong way,driver is expected to turn his car to right direction on full steering lock or reverse and make the J-turn.
2. No standing on track or massive slowing down - exept the car is in undrivable condition/position,in that case feel free to leave your car as an extra obstacle for others and hope for someone's help.
3. No disturbing on non-finished drivers after finishing himself.
4. No rejoining during run - if the car is undriveable,rolled or outside the track,the run is over!
5. Have fun! (also a mandatory rule

NOTE: After having some incidents in previous years,special attention on rule #3! If you finish your run,you may not interfere others in any way! Serious infractions will lead to disqualification. Let's keep it cool and fair for everyone!


(video made by Litro)


(video made by Litro)

The event will not require any sign-ups,but everyone joining server will be expected to have red the rules and information about event format above and follow them!
Feel free to post your interest to take part in this so everyone will know how many drivers (or even - if between them personal rivals) can be expected!


See you on track and have fun!
jmeade

my liver is ready
mbutcher

I won't be able to make it again unfortunately. This year is your year Jared.
Eclipsed

Password is now set,you can find it in 1st post. Make sure you're familiar with the rules before joining the server!

For those who needs a setup,Pete posted his in files section:

Deko messaged me this evening

"did you do Crashmaas as me?"
Litro

Oops, forgot about it!

Here are the MPRs of the 7 official event sessions. The afterparty lasted another 1.5 hours or so,that's just for memories.

Feel free to express your emotions.
Official results will be posted this year. Maybe... 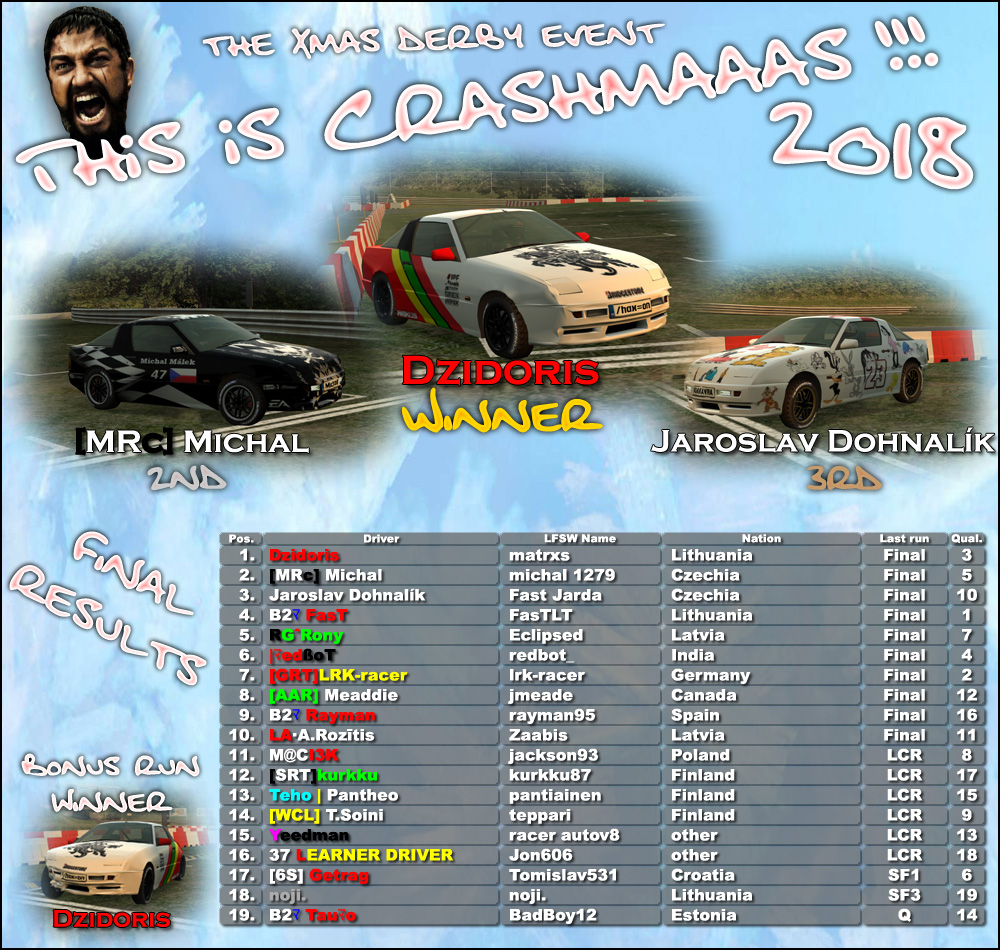 So it's time to post official results - still within 1 month of an event! 2 more drivers than last year qualified,allthough one of them left and never took place on grid. The usual 2-level system was used - semifinals,last chance run -> final.

It's know that drivers need some good pace to be the best also in this crashing event,this year between best 10 drivers in final were 3 "outsiders" (drivers who qualified outside top10),all of them took last 3 positions in results. Fast was the fastest in qualifying and mastered his semifinal heat without trouble - that just ment he had the biggest target on his rear bumber as he had a big amount of contacts during 1st lap of the final. This gave the chance for others to escape and his countryman Dzidoris used them best earning Lithuania the 1st This is Crashmaaas !!! victory. 2 czech drivers Michal and Jaroslav Dohnalík completed the podium,while the only previous winner present this year LRK-racer was kicked out of track on final lap while defending 2nd position. Dzidoris is the 8th different winner of this event in it's 8 years of running and Lithuania is the 6th different country in last 6 years to have a winner (3 first years were won by latvian drivers).

Bonus run featured a different grid layout again and also new layout additions. One of the object sets was "the funnel" - despite it's funnel shape it actually acted more like a filter as it filtered quite few drivers out of race already in 1st lap,another few during remaining 19 laps. As someone in chat pointed out,during late stages of bonus run all running cars had at least one busted damper,so it was a survival of the fittest again,Dzidoris took the winning momentum with him and became the 1st driver in event history to win both the final of the main event and the bonus run. The layout author used his knowledge to finish 2nd,Jaroslav Dohnalík got another 3rd position.

Everyone is welcome to express their experience here by commenting,even if some memories might have faded. And maybe we can get a "winner's speach"?

Let's mark the thursday 26th december 2019 in our calenders as 9th annual X-mas derby This is Crashmaaas !!! - I'm pretty sure this tradition has to be carried on. The only question is where it will take place as the upcoming graphical update might change the exact Fern Bay location. But whatever happens,we will find a nice place on one of the S1 tracks for a short 3-5 turn track on grass/gravel for this yearly tradition!

Race Green Events still will be offering clean racing through out the year - RTFR has been feeded up with sponsorship prize money by WCL team for this year,AWS season already starts to heat up,VERL will return in late summer/early autumn and in the making is project "STARL" - the 3rd RGE yearly league is in plans,more details around april/may!
This thread is closed