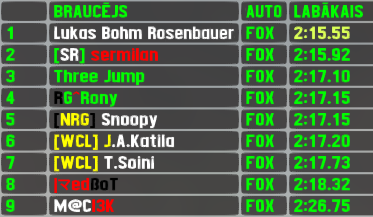 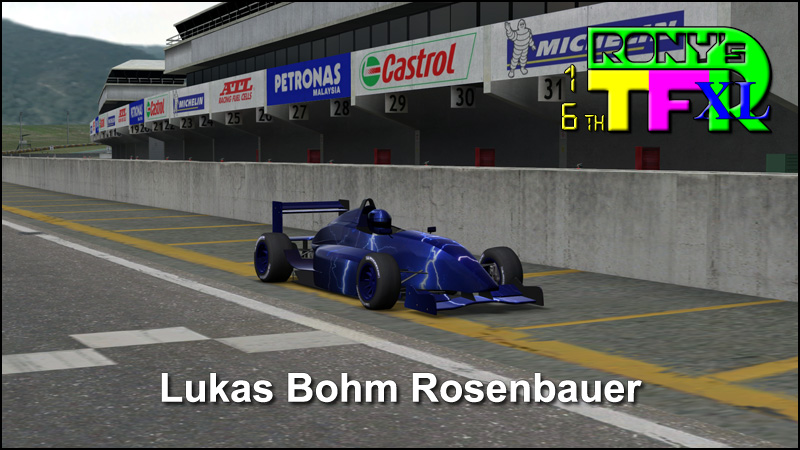 
Second appearance of the popular medium powered single seater car wasn't that popular here - was it the usual spring attendance drop or just the tricky and demanding track,who knows. Still competition for every place was there in some level,everyone had their ups and/or downs and hopefully enough fun to keep racing.

A name that is very known to weekly FM FOX Friday guests also here showed his skills with this car - Lukas Bohm Rosenbauer dominated both sessions and earned his 1st pole position,1st fastest lap of the race and 2nd race win. It was also his 3rd top5 finish out of 3 finishes,4 starts though. With his win Finland is the 1st country to have more than 2 wins - everyone knows the number should have been bigger,but some have decided to race under "other" flag. Three Jump was best of the rest in this race - he finished 75 seconds behind winner,which is 3rd biggest margin of victory,still his best finishing performance improved by 2 positions,4th top5 finish. Also 3rd place finisher had the previous best finish position 4th,now upgraded to 3rd - it was Snoopy's 2nd visit in top5 here. T.Soini just repeated his best position by finishing 4th,4th top5 finish for the only driver who has started every RTFR XL race,top5 was closed by Rony,increasing his top5 count to 8.

* CLOCK PITTER OF THE RACE :
Again a race impossible to finish with single tank of fuel,again same clock pitter - Redbot stopped just for 10.13 seconds,just a hundreth less then the best of the rest.

* FIELD RUSHER OF THE RACE :
T.Soini started 7th and finished 4th - +3 positions is the best performance in this race.

* HONORABLE MENTION :
Despite winner's domintation,there was at least one other driver,who could at least remotely challenge him - Sermilan was the only other driver able to set laptime under 2:16 in both sessions,but he had to concede to the risky chicane 10 laps before finish.

Mr. Rosenbauer already has messaged his choice for 17th RTFR XL - it will be first ever race using the all-wheel-drive GTR class car FXR. Race will be run in the South City's Chicane Route reversed direction,probably known combo for AWS participants,all though the race here will be almost twice as long. But already next week normal RTFR will return with one of the slick tyre racing machines,more details will be posted sunday.
Eclipsed 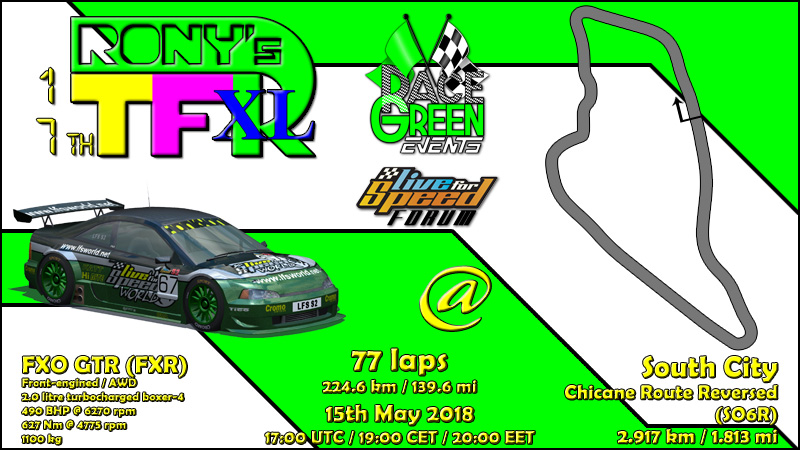 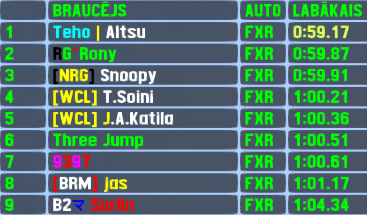 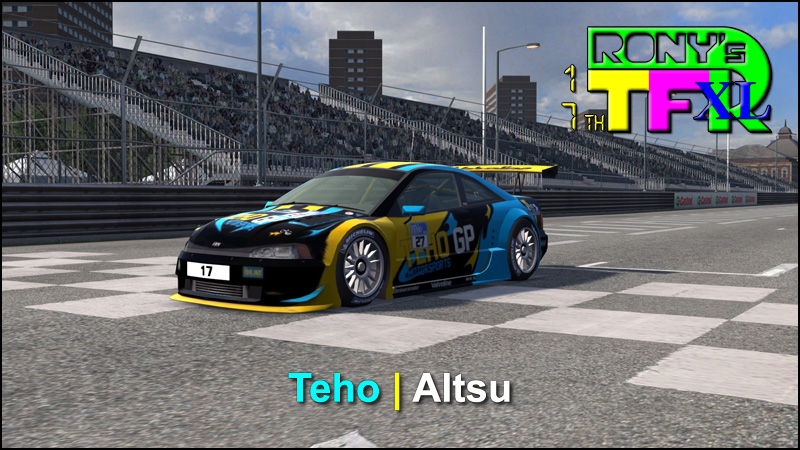 It was already 3rd race using GTR cars,but just 1st one with FXR,XRR is still untouched. Combo wasn't easy,rather demanding and if done wrong - frustrating,as the stiff handling AWD racecars require precise handling,easpecially in the narrow chicane,where it's so easy to hit walls. Probably one of the reasons of lower than average attendance.

Altsu set the best time in qualifying with safe margin to the competition and scored his 4th pole position - noone else has this many in RTFR XL history. Early in the race he run away from followers and it seemed like he'll dominate the entire race,but then he was chased hard by his compatriote who was setting one PB after another and decreased the lead. Proabably due tyres recovering from heat peak Altsu was able to increase the pace and also distance to followers. During pitstop phase he lost the lead,but regained later to lead until finish line - Altsu is now the 5th driver with multiple wins,4th top5 finish in total. Despite blown tyre in 1st corner and time penalty for pitstop being too short,Rony still finished 2nd,collecting 9th top5 finish. Snoopy improved his best qualifying effort by 2 positions with 3rd position and repeated his best performance in race by keeping the same position in finish,3rd top5 finish in his stats. J.A.Katila complained about update disturbing his race,had to settle for 4th despite heating up leader's race in 1st third of the race,4 top5 finishes for him now. Top5 was closed by 9397,who finished in top5 for the 1st time,improvement by just 1 position.

* FUN FACT OF THE MONTH :
Actually this fact is not that much fun,but still something that stands out - with just 6 finishers this race had the lowest number in RTFR XL history in racers finished category. Previous worst was 7 in 7th RTFR XL (FBM @ FE3)

* CLOCK PITTER OF THE RACE :
T.Soini actually was the only one with pitstop without pitwork,so the mention was easy to earn,still he had also the shortest legal pitstop between all finishers with 10.24s.

* FIELD RUSHER OF THE RACE :
The newest top5 entry 9397 gained 2 positions between green and chequered and also was one of just 2 drivers to gain positions at all.

* HONORABLE MENTION :
J.A.Katila had the pace to close up on the race leader. At one point it even seemed that this race will have an actual fight for win. Unfortunatelly for him his software decided to disturb his race sending him off course. At least he came back in race and tried for 3rd,but run out of laps.

Altsu announced his choice for next already after finish in server - next race will be return in Kyoto,using almost the same layout as one race ago with one difference - we will be running other oval part between usual GP Long sections. Configuration is known under name Grand Touring and codenamed KY32. Also the car will be relatively similar to the one used one race ago - the powerful Formula V8 instead of it's smaller brother FOX. After next RTFR race (next tuesday) the server will be set to the combo for almost 2 weeks for testing purposes.
lucaf

Thanks for the event. Actually I hadn't planned to join it - GTR@South City sounded just too challenging for me. But the reverse version of S06 with FXR wasn't that hard as one could think, so after some practice laps I found myself in qualify, and finally in the start grid. I rather would name myself as pit clocker - refueling + one tyre changed, still just +0.99 over the mandatory 10 secs

Combo for next race loaded in server Ronys Tuesdays Fun Race for testing purposes - since it's not a standart combination,possible laptimes have to be found out for distance calculation.
Combo is FO8 at Kyoto Ring Grand Touring (KY3X-K32)

Combo will stay until next RTFR race (scheduled for 5th june) will be set up.
Eclipsed 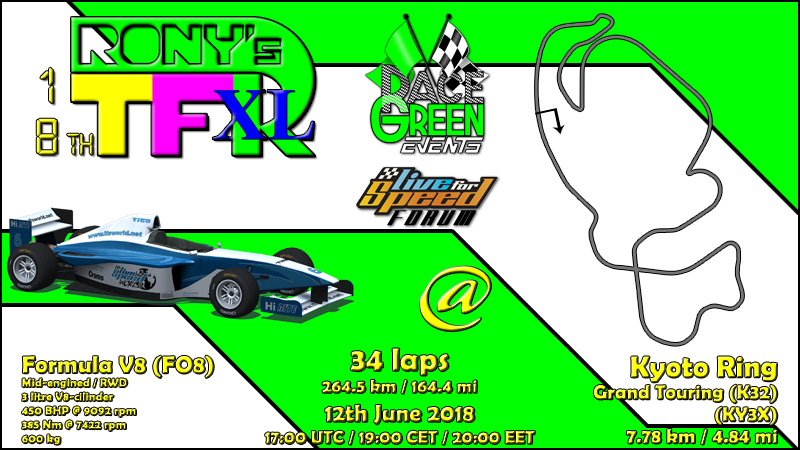 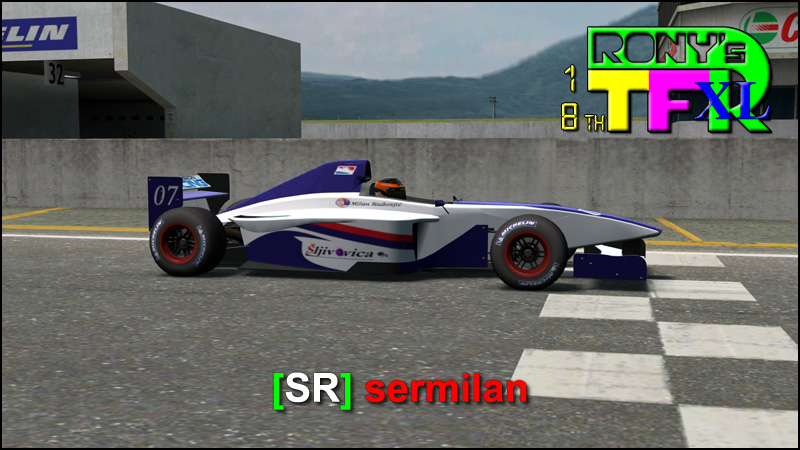 
We can only guess if it was the combo or other reasons,but the 18th RTFR XL goes into history as the lowest attended race. Only 7 drivers attended,6 started and 6 finished - the last number is just repeated lowest,set 4 weeks ago. But at least all 6 starters finished the race,which is the 2nd time in RTFR XL when all starters are scored as finishers.

There were no doubts about yesterday's winner - Sermilan set fastest time already in combo testing weeks ago,was fastest in qualifying and in race,taking all the glory home - it was his 2nd entry in all the following categories: pole position,fastest lap of the race,race wins and top5 finishes. He is now 6th driver with more than 1 race win. Also 2nd place was pretty clear - Rony had close follower in early phase of the race,but could run away and take relatively easy 2nd place home,repeating best finish and scored 10th top5 finish. Most of the race was practically time trialing,but there was at least something similar to fight for position in later stage - T.Soini delivered it,even if the pass was made using opponent's mistake,3rd place finish was earned - best of his 5 top5 finishes. Redbot finished 4th,which is improvement by 2 positions,also his 4th place in qualifying was an improvement by 1 position. J.A.Katila finished 5th - 5 top5 finishes in his account now.

* FUN FACT OF THE MONTH :
As already mentioned,it was the 2nd win for Sermilan - his 1st win was also scored with margin of victory of just over 60 seconds.

* CLOCK PITTER OF THE RACE :
Tyre change and few seconds waiting - 10.15 seconds was the time of the shortest pitstop in this race,set by Rony. Every driver either changed tyres or refuelled or both.

* FIELD RUSHER OF THE RACE :
The only driver with positions gain between green and chequered was T.Soini - he gained 2 positions. Interestingly his teammate lost 2 positions,so practially only order change in race was 2 teammates swapping positions.

* HONORABLE MENTION :
Since we had only 6 drivers in yesterday's race,only one is left unmentioned. Maciek had somewhat lower pace in the race,but never gave up and finished the race. Some might say it's no fun to finish last,but even then valuable experience is gained which will help in future races.

The winner Sermilan has now time until next tuesday to submit his combo choise for the next RTFR XL,planned to be run in 4 weeks. Until then we will have 2 normal RTFR races,first of them already next week - some of the slick tyre racecars will be used,more details in the weekend before it.
jackson93


It is nice to be part of history...
And that I didn't cause any crash...
And that it was my first FO8 race ever.

See you on track next time.
sermilan

Hard combo, but a lot of fun to drive.
Well done jackson, that's the spirit!
faansolihin

The answer is in two bottom paragraphs. You can click server name and LFS should start connecting. But you will need to type password on first try.
lucaf

Why to quote a text if not read it first

Nice memories of that first xl-race, it was my first race. I recommend to participate next ones, really nice events! But do not be discouraged, drivers are quick. I mean the others, not myself
Eclipsed 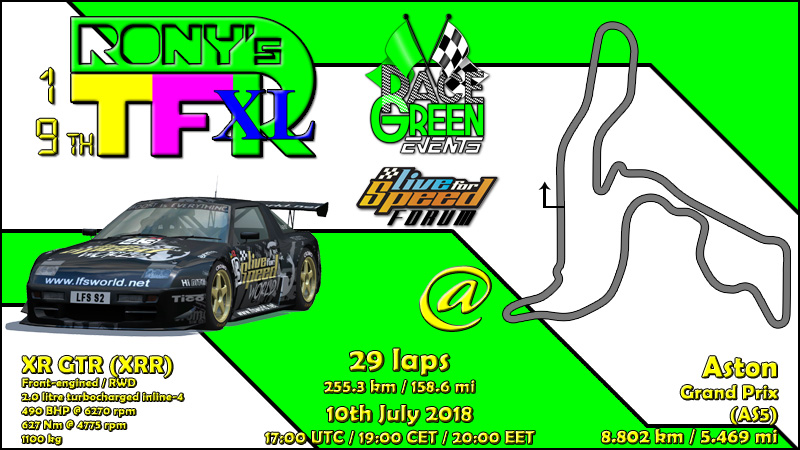 Do you want to kill us?
Litro

Brilliant photos! You have a great talent, I use to love your video edits

I decided to risk with tyres, but at least I know what to expect next time

There goes my race, right there in the first turn HAHA

Great vid, thanks for sharing!