Taken just after he met a very solid concrete wall, whilst being pushed by a bigger car, it didnt like it

And for those that wondered, it used to be one of these, once.

Omg, look at the paint, it has a big scratch on the front.

I can see why people like KDE but me? I personally hate KDE with a passion. There's millions of useless buttons all over the place that don't do anything I want them to, screaming "ME ME ME! CLICK MEEEE!", and it took me 5 minutes until I found the program I wanted.*

No! Just gimme my Firefox, my files and my terminal. Then I'm a happy 'nixer.

Cool desktop though! At first I thought they were clickable links to artist playlists (which would be awesome, wouldn't it?) but it's just a wallpaper.


*KDE in Ubuntu, I haven't tried KDE in other distros.
danthebangerboy

As mad as it sounds, we did manage to pull it about in strategic places on the back of our lorry when we got home using the crane and actually managed to get it reasonably straight again with a view to taking it to a smaller meeting over here.

It want really too bad considering how it was, panel beated about under the wheelarch and managed to get the inner and outer wings ready to be stitched back together using weld, chassis member could have also been plated up and repaired where it had creased and split, all it needed was a steering rack replaced and another engine and it could have gone one more meeting, but we darent take it really

Would have only took some yahoo trying to make a name for himself turning round and going flat out into the front of it head on or something and that front would have bent back to where it was if not more, could have potentially been a death trap if it took the wrong kind of hit at the wrong angle, so we didnt bother in the end.

The hit was captured on video, as well as the 2nd one he took a few seconds later that i didnt know about, drivers side too, could have been alot worse for my mate who was the pilot, look of the size of the yank limo pushing him in, plus the jag pushing that, thats one hell of amount of force! 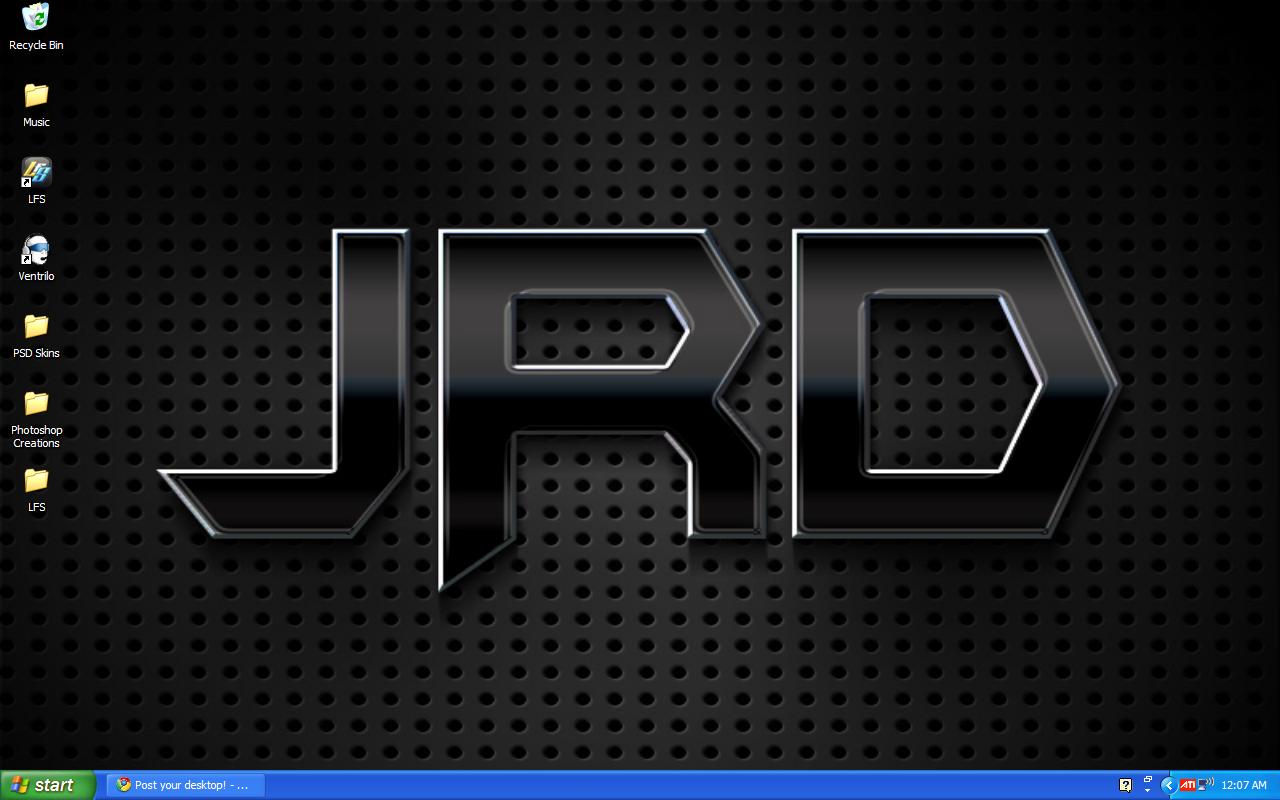 It does his job and aslo makes me laught, why not ?
matijapkc

I haz a new one. There were more icons but I deleted them on the picture... Those were a few songs and a folder with my school stuff and there's no need for it to be there..

Was bored. Took another snapshot of my Blackberry and touched it up in bridge. Still unsure of what skins I should use for Rainmeter
Bose321

Yes, it's retail Mac OSX Leopard and yes, I'm running it on my PC.

It runs quite well actually. 64-bit, GPU accelerated. Adobe CS5 and Nuke run even better than in Windows 7. Just a few extra kernel extensions, GFX injectors during boot, recompiled DSDT pointer list to properly connect OSX to my BIOS and that's it! I'm even running the untouched Vanilla kernel. Boots in about 20 seconds.

Yet you molest it by running Firefox (Firefox is by far the worst piece of OS X Software... it's slow, doesn't follow the expected OSX behaviours for... well everything.) I'd suggest Safari, or even Chrome.

Also, as much as µTorrent is great in Windows, it's really not as great in OSX. I'd suggest Transmission for torrenting.
(SaM)

You're right about Firefox in OSX, it's a huge memory hog, takes 3 times as long to start up than Safari and after 20 minutes of browsing and having a few tabs open, it gets even worse. That, and it doesn't like common OSX shortcuts very much. Like Command+[ or ] for Back and Forward works half of the time (Which I mapped to my mouse buttons with USB Overdrive)
I just installed it because I'm used to it back in Windows, I could Sync my history, bookmarks etc. and to run Ad Block Plus but I notice I'm grabbing Safari more often now. That's really not a bad browser.
But Chrome? Ugh. No thanks.

As for uTorrent, it does what I want it to, I never missed any feature. I don't see a reason to go for Transmission.
dawesdust_12

Fair enough. I prefer Transmission mostly for the UI, but I haven't given µTorrent a try in ages. Firefox is definitely a piece of crap on OSX. They never have given it the appropriate amount of attention on OSX to bring it up to atleast proper interface guidelines, nevermind performance.

If you can't stand Ad's.. go get ClickToFlash.. it replaces Flash objects with gray Flash boxes (which upon clicking, activate the object)

Then there are extensions for Safari that will take care of the rest of the Ads (Don't know which, as I have no qualms with Ads.. just Flash sucks).
(SaM)

That's why AdBlock Plus is right on the money. It blocks any blockable content based on what users marked as ads. You subscribe to one of those lists and almost any ad is gone, leaving genuine objects you'd actually want to see intact.

Yup, I hate ads with a passion! Which means I really have to find a solution in Safari for it to become my default OSX browser.
Otherwise, my loyal but clumsy Firefox will remain the default.

There are HOSTS files out there that block ads. That'd be the easiest. you can just chuck it to /etc/hosts restart OSX and Voila.
anik360

Heh, someone actually agrees with FF running slow on OSX. Use chrome for my macbook which I got recently from my work. Anyways reorganized my win desktop with another rainmeter skin and gobbling up on my ram by running my usual day to day work apps. Running FF with these apps brings mem usage to 4.9gb out of 8gb
Ni-san

Your monitor must be huge.:cry:
amp88