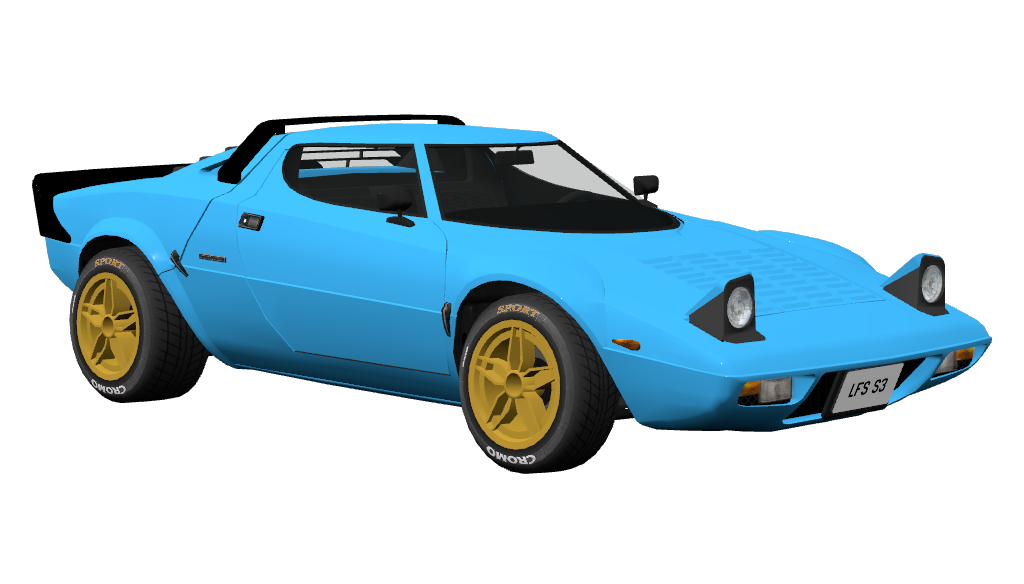 Engine sound made by martin18.

License type : CreativeCommons Attribution (BY)
Content / license location : https://sketchfab.com/3d-models/lancia-stratos-low-poly-model-3e896215812e445281f6516aef4bb572
License credits : "Lancia Stratos - Low poly model" by Daniel Zhabotinsky is licensed under Creative Commons Attribution. Use the model as you see fit, only modification of body geometry is prohibited. Have a nice day.

This mod is inspired by the Group 4 version of Lancia Stratos HF from 1976.

I imported the Lancia Stratos 3D model by Daniel Zhabotinsky and used his textures. Then improved the interior and suspension according to real life car reference photos.

I'm working on a mod inspired by the famous Lancia Stratos rally car from 1976.

3D model source: https://sketchfab.com/3d-models/lancia-stratos-low-poly-model-3e896215812e445281f6516aef4bb572 - the model author says "Use the model as you see fit, only modification of body geometry is prohibited." - I hope I'm allowed to add things like a better interior, because that is not very detailed out of the box. 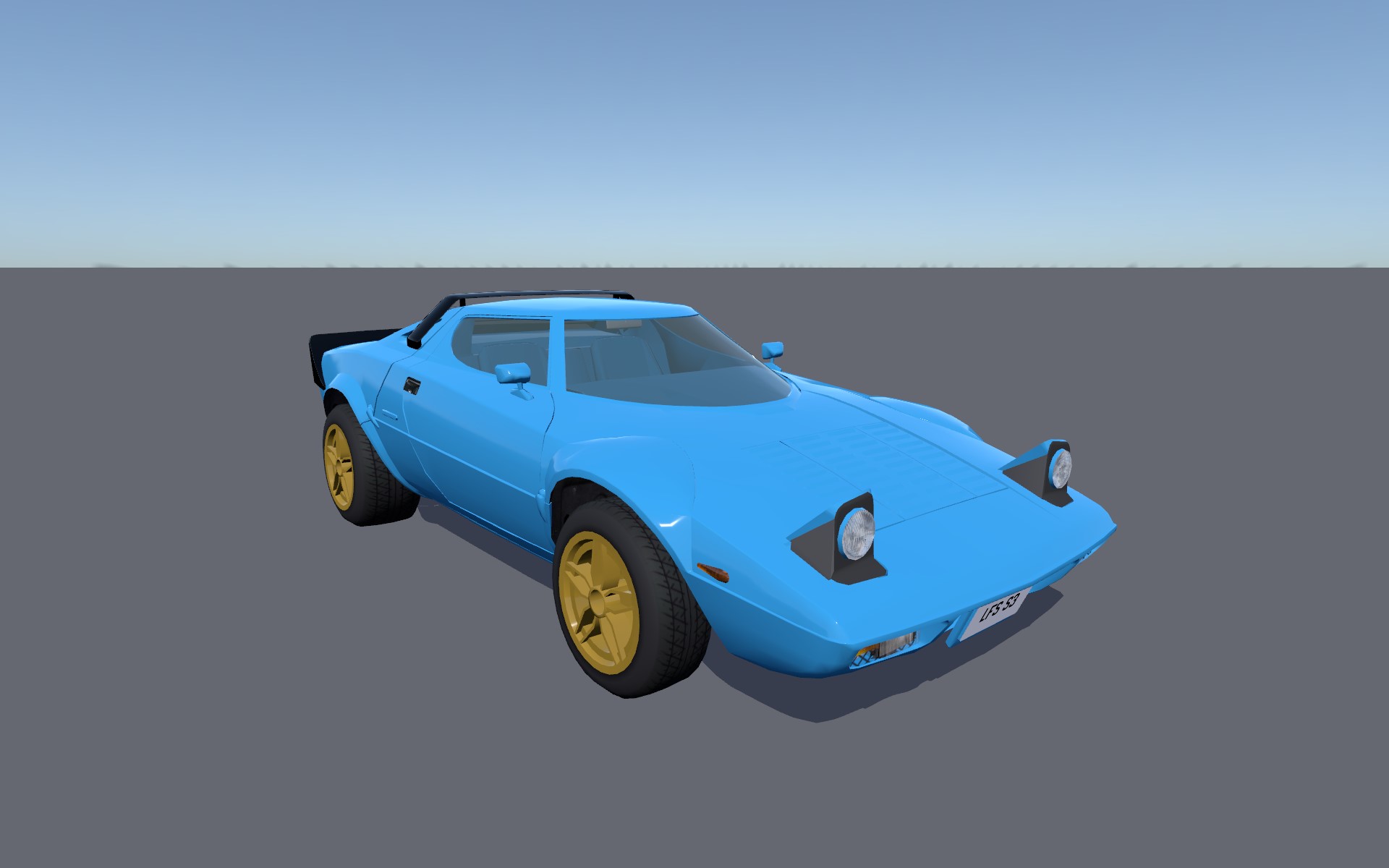 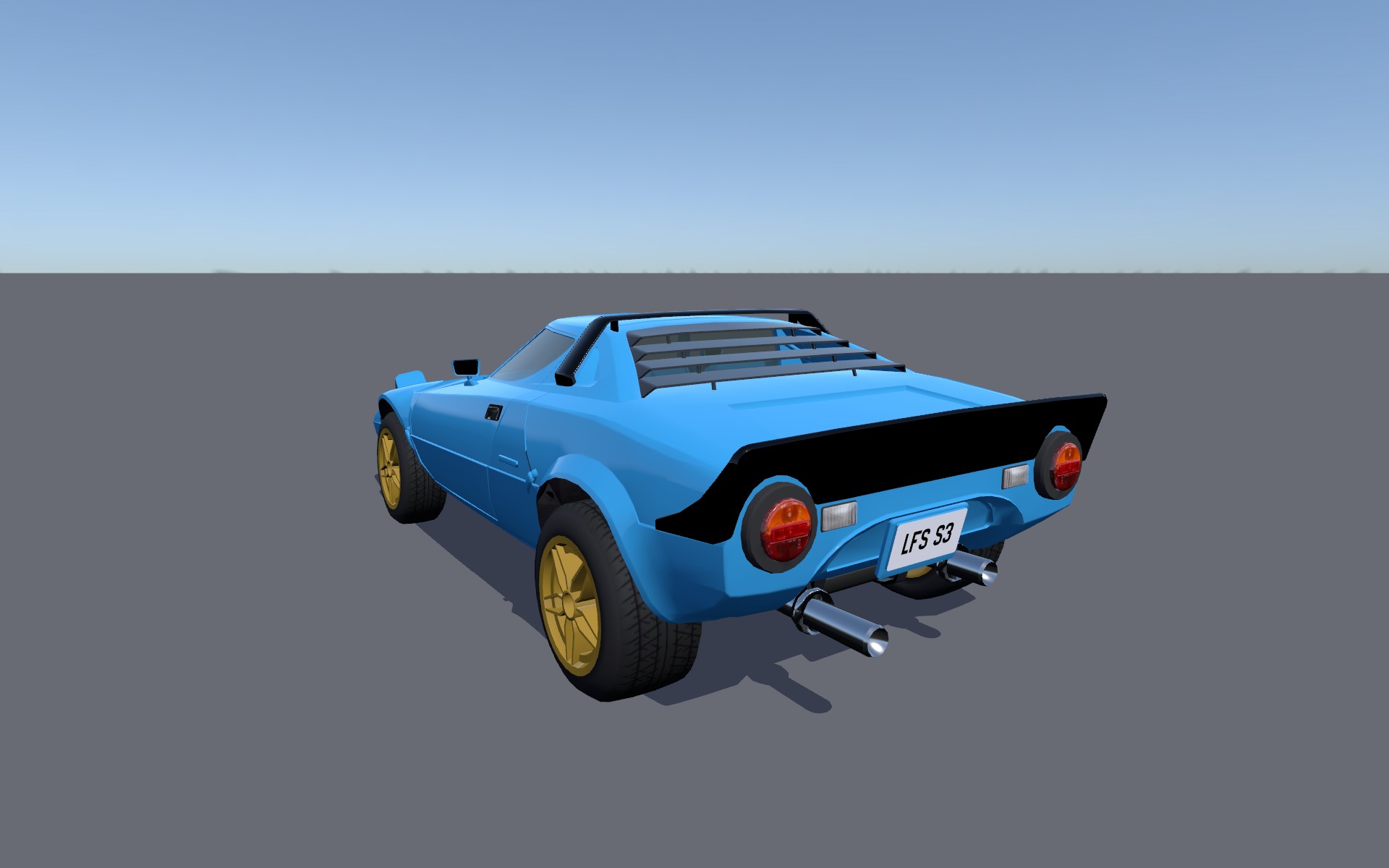 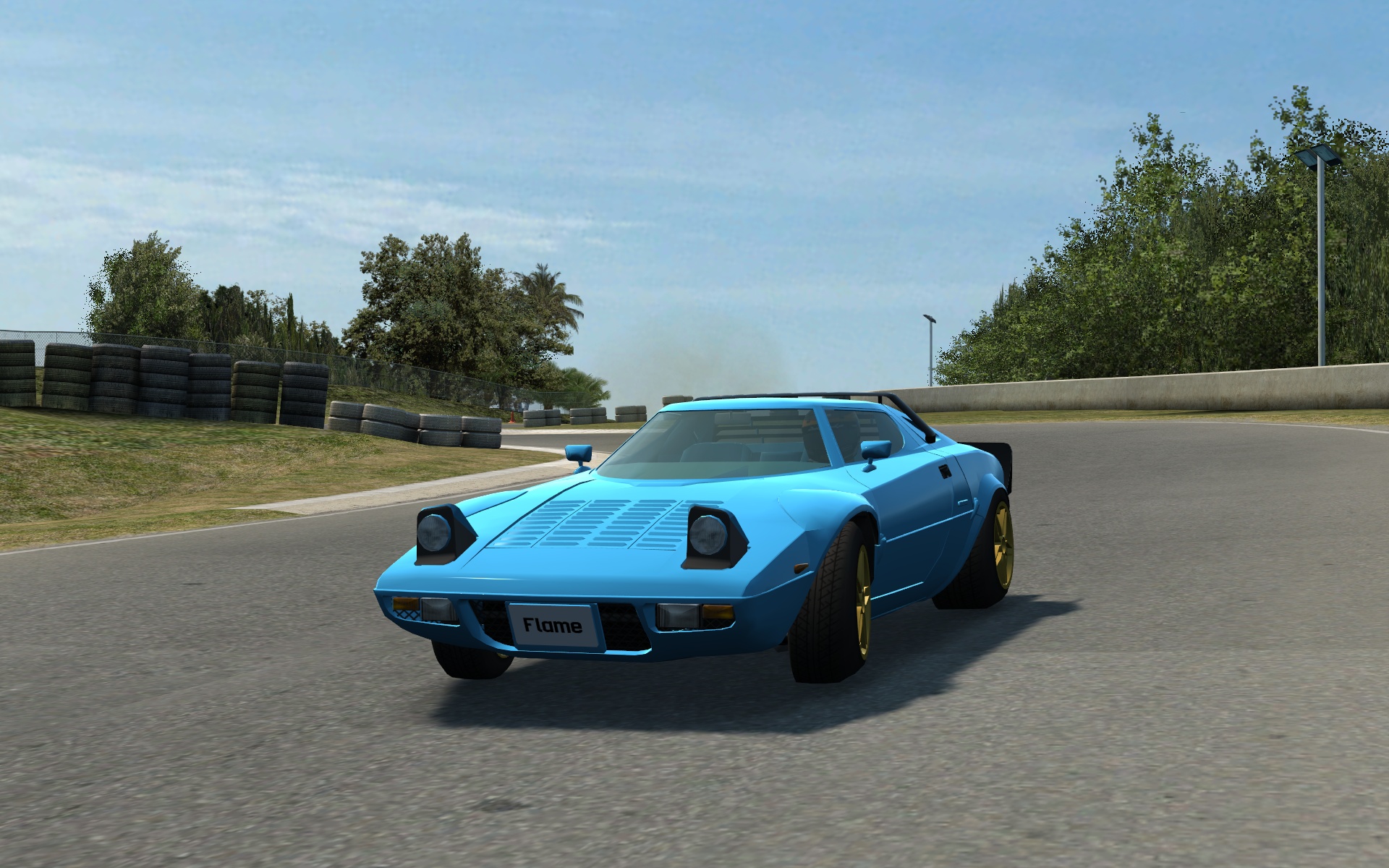 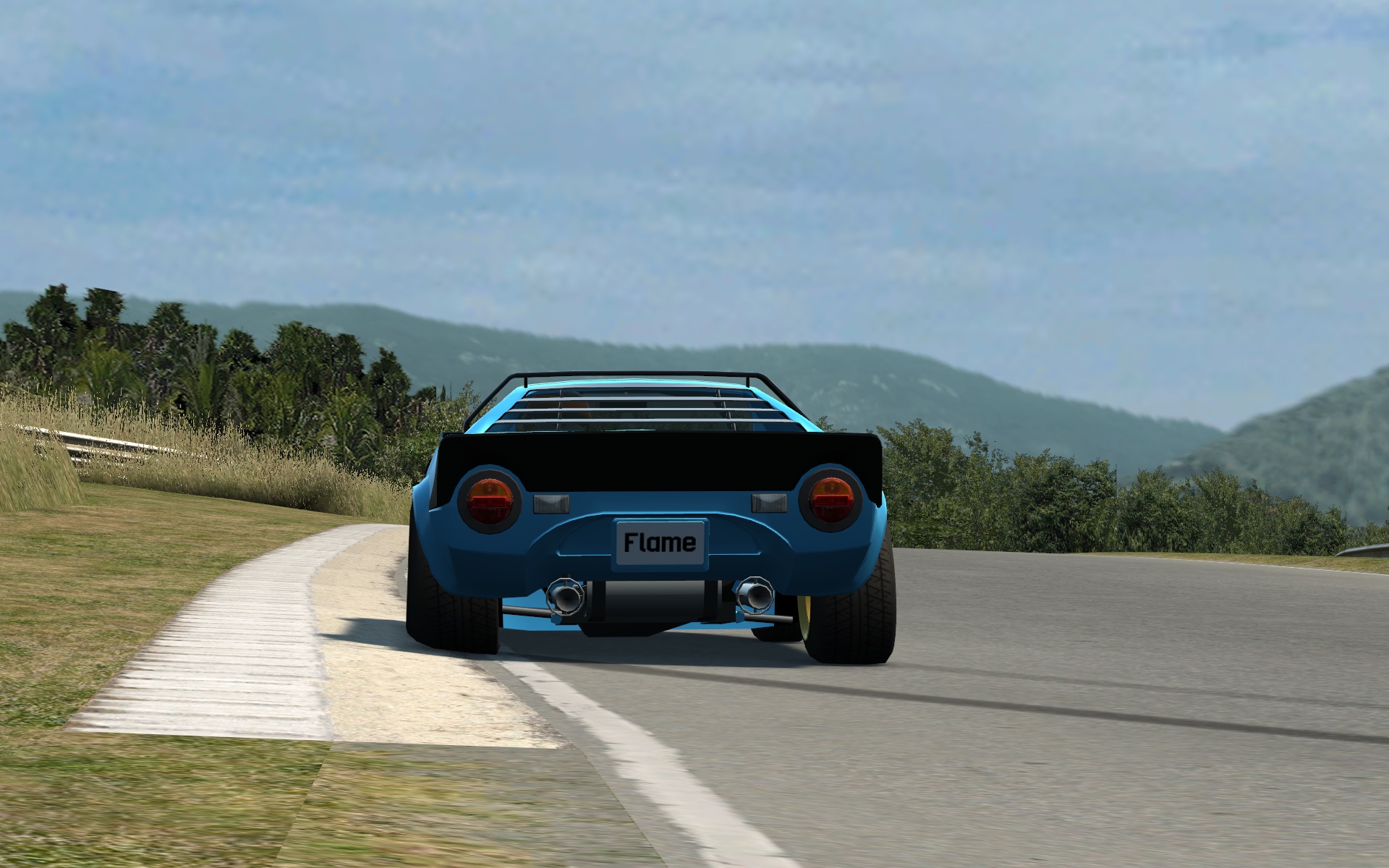 will this have some iconic fictional alcohol sponsorship skin?

I love that car! I can wait to try this

As I'm no expert, where can I get such information? I checked this reference page and is says it does have an adjustable rear anti-roll bar.

So they didn't actually use it in the rally spec?

I'm also struggling to find a good picture of the suspension geometry - I oly approximated it according to some reference photos and the 3D model, but it may be totally wrong

This image shows antiroll bars and drop links both ends

Omg too excited for this!!!!
Cimanu

That dudes sketchfab is pure gold for us

I don't know if you could infer anything reasonable from this kind of instructions and photos of model parts with a ruler.
https://www.super-hobby.co.uk/products/Lancia-Stratos-1977-Monte-Carlo.html
These models are probably not very accurate, but you could cross-check the data using models from two or more manufacturers. They have many photos like these on that site.
Flotch

You are right => the 037 wasn't having one, the stratos was more conventional regarding this.

I might be able to find some period data on the road cars and _some_ variations of the Group 4 versions. No promises though!
martin18

Thanks, it sounds nice

Here is a sample video with the new engine sound (sorry for bad mouse driving):

I don't understand, why are there two separate sound files? Should I load both of them and then re-save, or how does it work?

While Stratos_SoundV2 you load from Transmission / Audio -> ENGINE SOUND FILE.

If I load ENG using either of the two files, it results in the same values, so I guess only one file is necessary for both engine values and the sound?
Flame CZE

Anyway thanks for the tips, here is a video with the correct sound:

It sounds very good to me!

Well I’m glad you liked it 👍 do you still want more bass or is it ok?
fangio86

great improvements, one of my favs cars of all time. Sounds perfect to me
loopingz

Wow we need a cocopine équivalent to Vermouth!

And nice project by the way! Might be crazy on Rallycross!
Flame CZE

I've just found some nice reference photos for the suspension, so I will adjust it accordingly. It also has nice photos of the interior, which will be helpful.

This is cool one! Looks like it's fun to drive!
Flame CZE 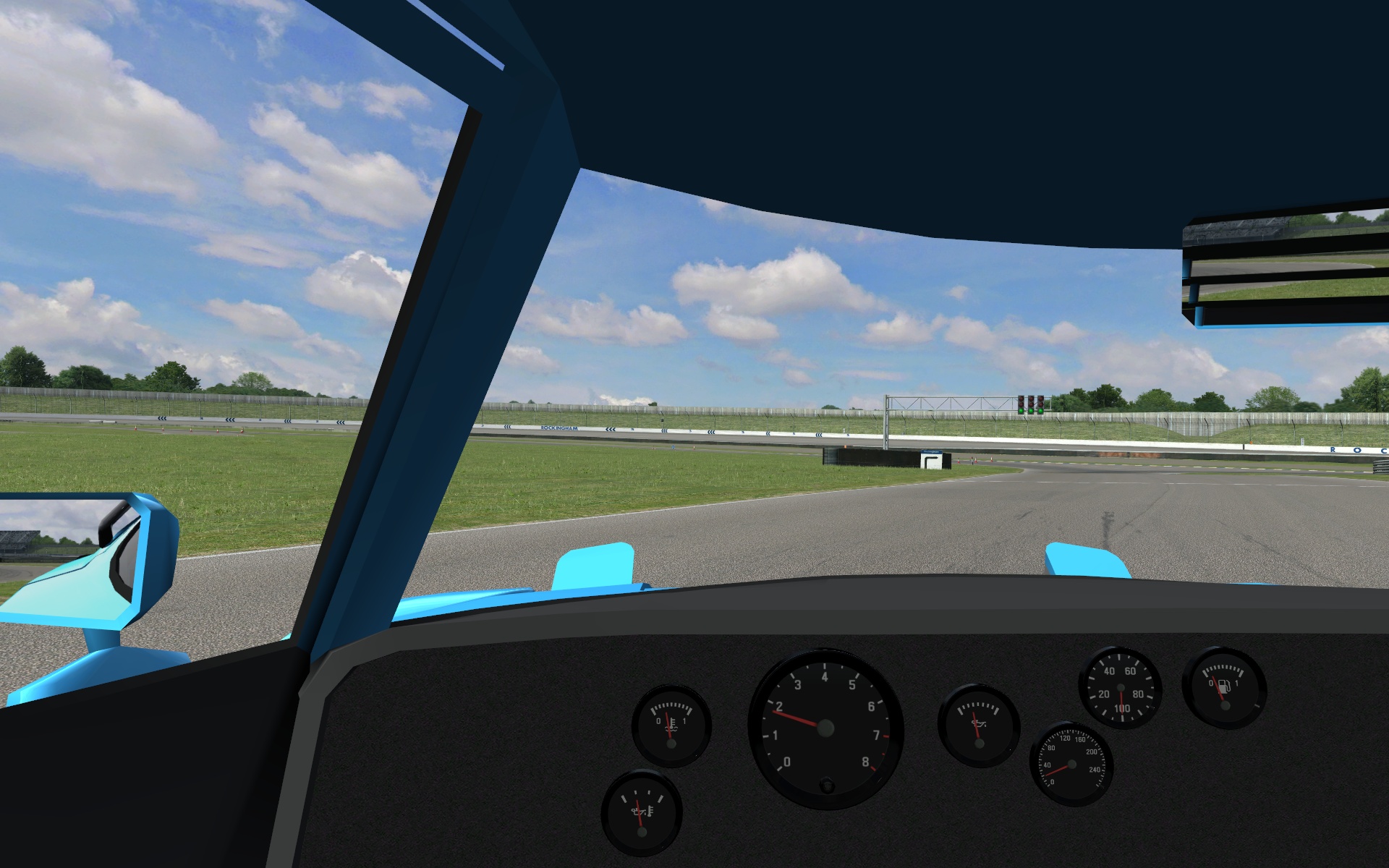 And the suspension geometry has been updated according to reference photos: 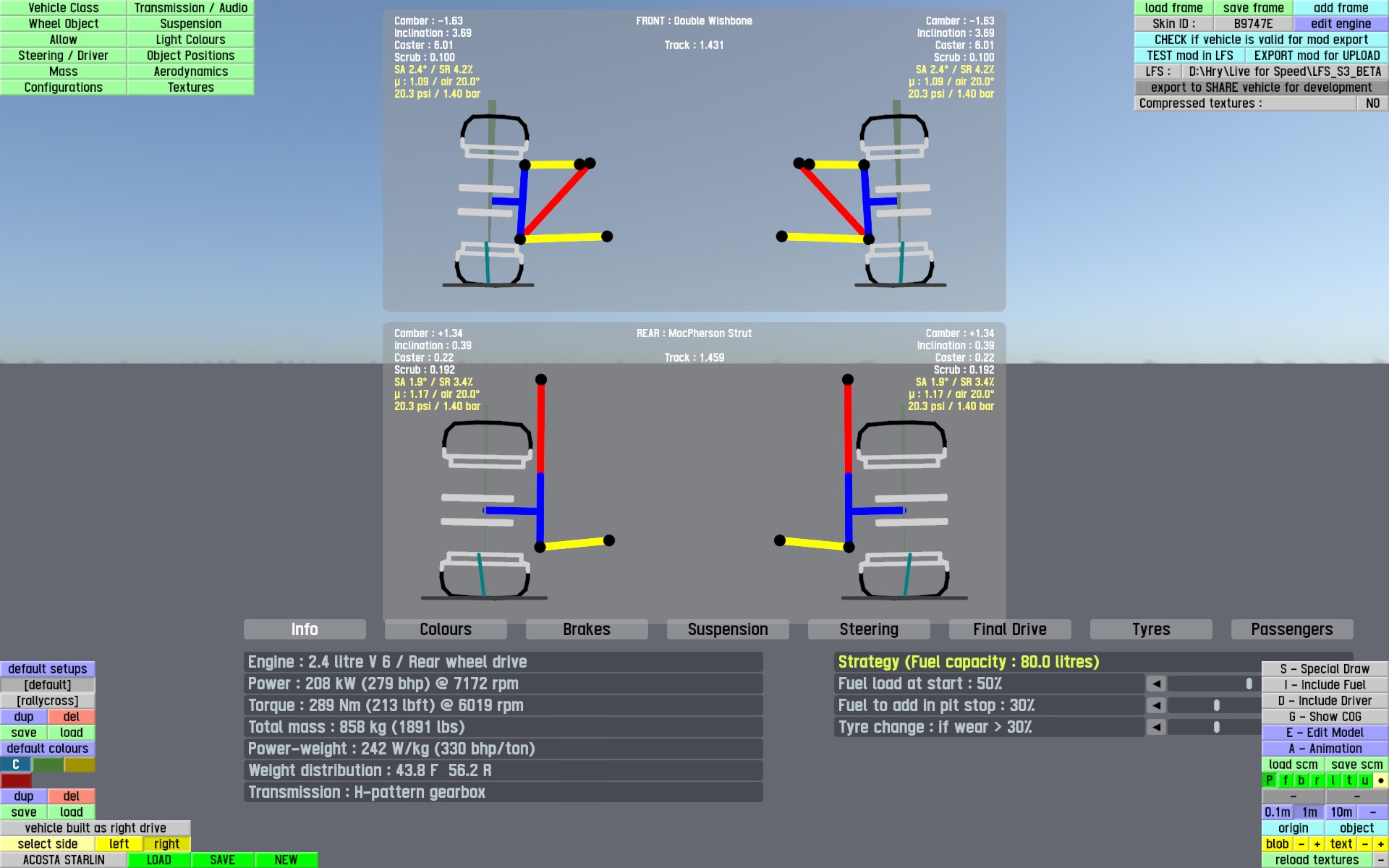 I am using your engine, I just increased the redline to 8500.
martin18

That might mess with the power curve and the sound.(higher RPM higher pitch) Those Dino V6 didn’t rev up that high
Flame CZE

OK, I see. I will revert that change then.
Flame CZE

I was looking at some photos and onboard videos and even though they shift up at about 7000 RPM, the speedo gauge actually goes up to 10000, so I thought the redline would be higher than 7200.

Not sure if you are doing the rally version or the street one but according to this article it had redline at 8k.

Thanks for the article. I'm trying to recreate the rally spec.
Flotch 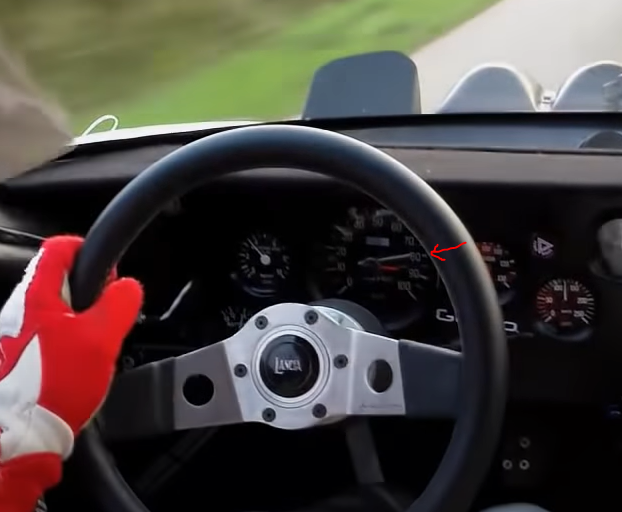 The guy is even reaching 8500+ several times
Flame CZE 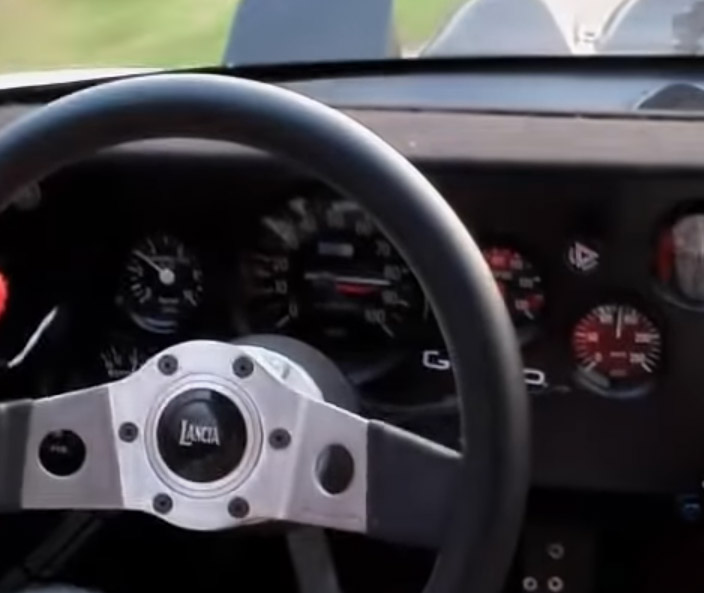 anyway, this is not surprising : to have a good acceleration, as much as you can, you need power (or "powerband", "mean power"...), so you better be able to reach RPM higher than just the "max power RPM". For instance, the stratos engine is supposed to give its max power at 7000 (but you can suppose it is a classic small lie quite common in rallying : remember the 2000's car having "300hp" but able to get sub 4s to the 0-100kmph with more than 1200kg, while in real they were having at least 300hp between 2000 and 7500 rpm), so the real peak power is probably higher with some more hp, and you have a gearbox doing some classic 1500RPM drop between gears when hitting +8000rpm, leaving the engine running around the peak power RPM to maximize the acceleration.
Having cars hitting the peak power at the redline is not so efficient regarding this (NB : this does not mean Ferrari road cars are not accelerating quickly

), this seems then normal for a rally car to have a redline higher by a consequent margin than the peak power.
martin18

Sound like I’m going to rework it a bit more! Thanks for the videos and links guys! New redline will be 8500 rpm’s and will retune the sound so it stays that deep tone at that high rpm’s
Flame CZE

By the way, I've tried aligning the gauges with real life photos. According to the photos, the speedo should be aligned with the steering wheel and the two small gauges in the top right are aligned around the centreline of the car.

Pretty sure the steering wheel in this wasn't aligned with the seat, neither were the pedals. They talk about it on a Top Gear feature on the car.
detail

I think the frame corner by which you aligned the image, is closer to the photo camera than the panel plane, and it has some parallax effect. It seems to be closer to the center than it really is. So I think you can widen the reference texture.


...or I'm wrong, if you aligned it by the panel itself.
timdecnodder

I haven't worked on it much recently, the interior is still quite dull and the driver doesn't align with the steering wheel yet. But it looks good from underneath

Not sure if you've seen this video, but it may help...

Engine not done yet either… been busy with holidays and I just moved to another place, and just went back to work today.
Flame CZE 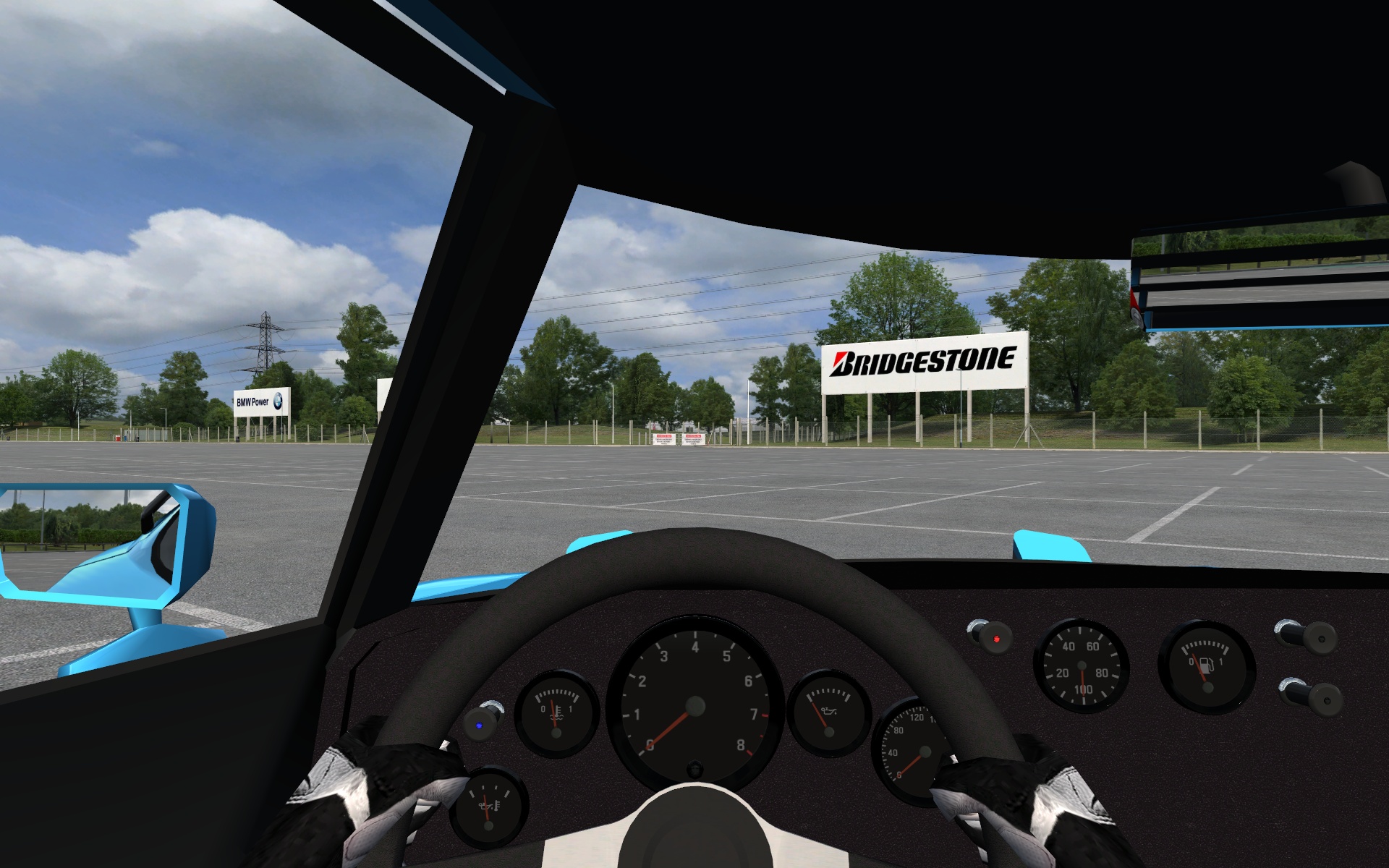 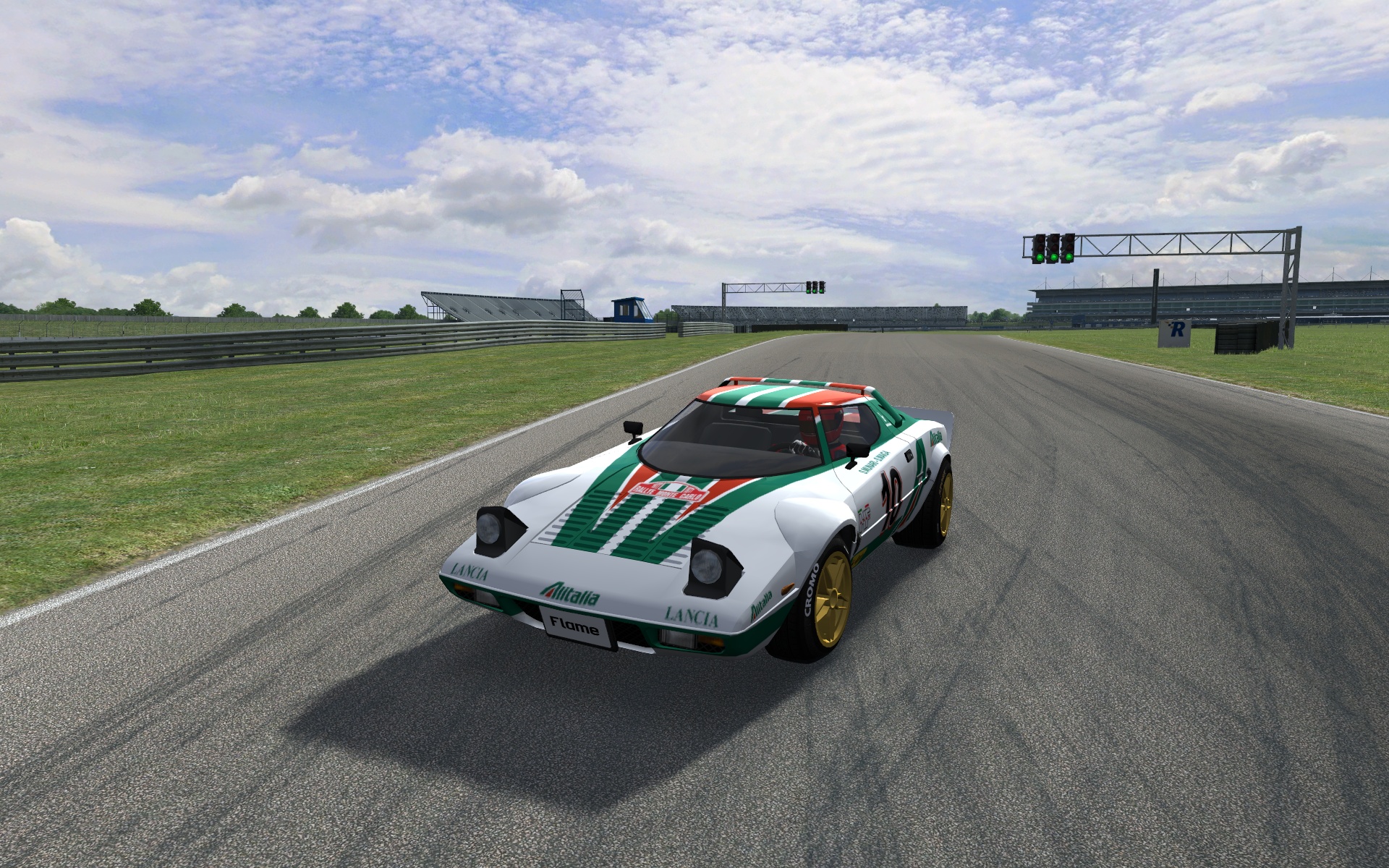 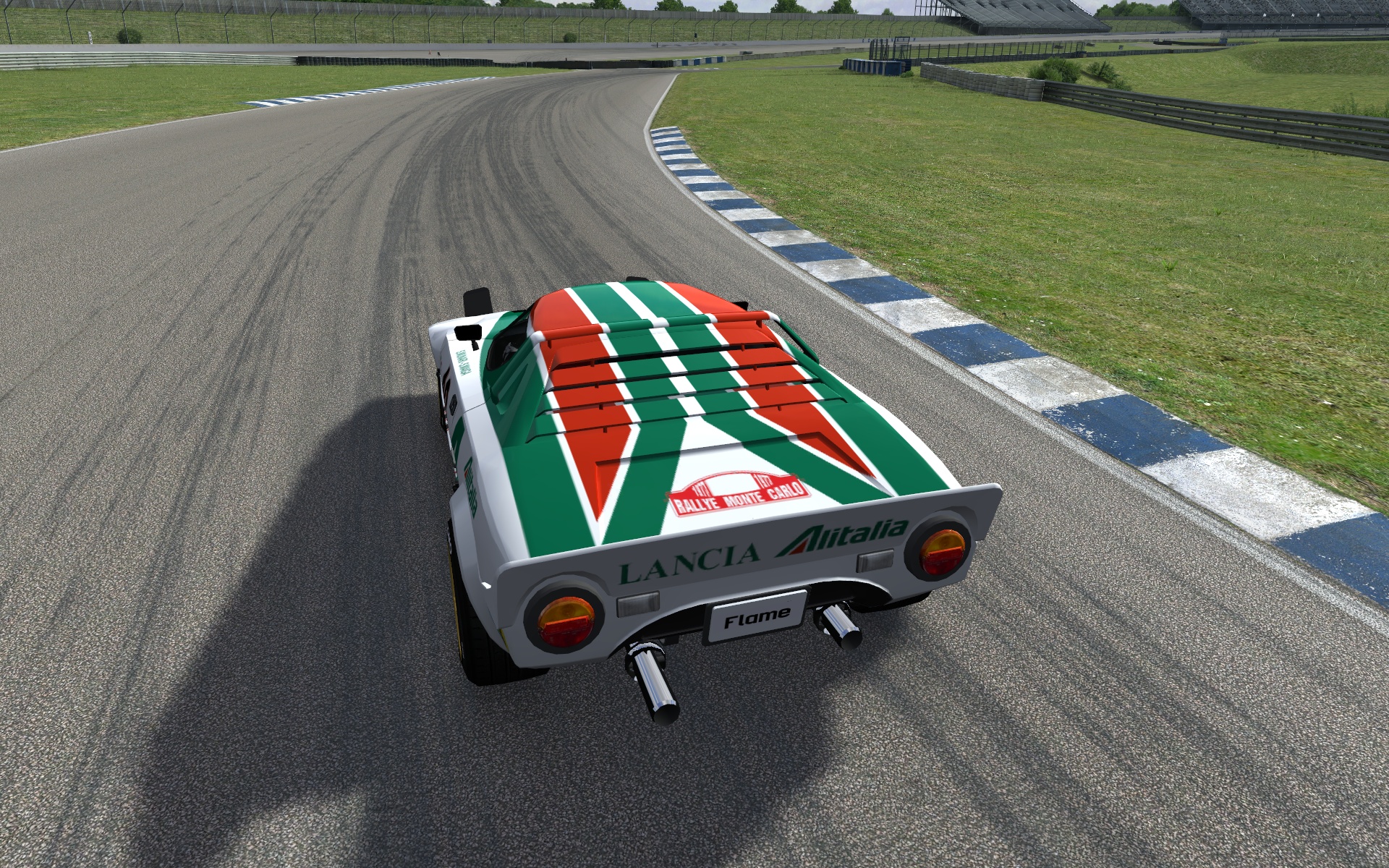 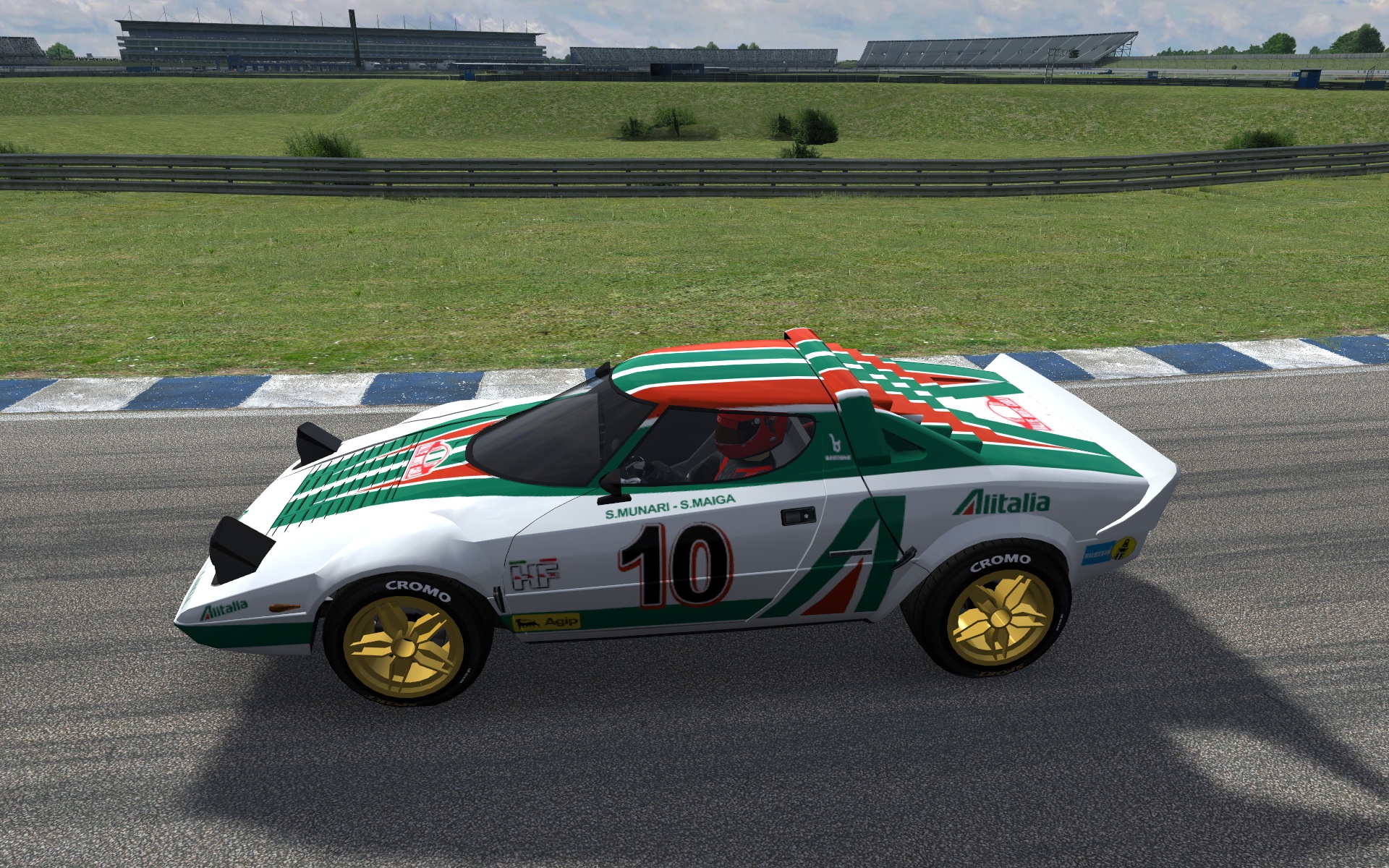 Oh yeah that looks good! What's left before getting it public?
Flame CZE

My most anticipated mod so far

I'm running a server called Lancia Stratos with it on, so feel free to join.
Jake_Blasted

I'll have to ask the original model author since he does not allow modifications of body geometry, so it's up to him if he allows such additions.
marcin338

There no need to change the 3d model tho, only put those tubes, mudflaps, spare on roof and extra lights. But ok hope u can.
PeterN

Suspension seems pretty fragile, quite likely to implode when going up a ramp.
Flame CZE

You're right, I'll try to tweak the default setups to have a stiffer suspension with more damping.
NENE87

Congrates for the mod, interior is good for me!
Flame CZE

A few updates and bugfixes:

Thanks for the high quality mod. A fun and challenging car to drive.
P V L

drives beasty but nice, dash is done very good as well. Found out what 3 of the control lights are

for yet. Lights, indicators and handbrake. Lets see what the last one will show

you did again an amazing job on this, Martin. My gratulations on this masterpiece, P V L.

I've got s confirmation from the 3D model author that I am allowed to add things like a light pod or mud flaps, so this should be fine

Thank you for this stratospheric mod!

I wonder if you could enable the slick tires too, it would be great on tracks.
Pirelli created specifically for this car a semi-slick tire that unfortunately is missing in LFS, but I think slick tires would be good enough.
I've seen also other pictures like this one after the Montecarlo rally in '77.
Not as much as we need a proper rally track on LFS, but I know, that is a r(e)ally off-topic argument!

How to put this skin in game, i copy skin to vehicle folder but i cant find it in game?
TFalke55

it needs to be in the skins folder
Goran_MNE

It is, but i cant find it in game
Flame CZE

Have you done this? The skin should appear on the list of skins. 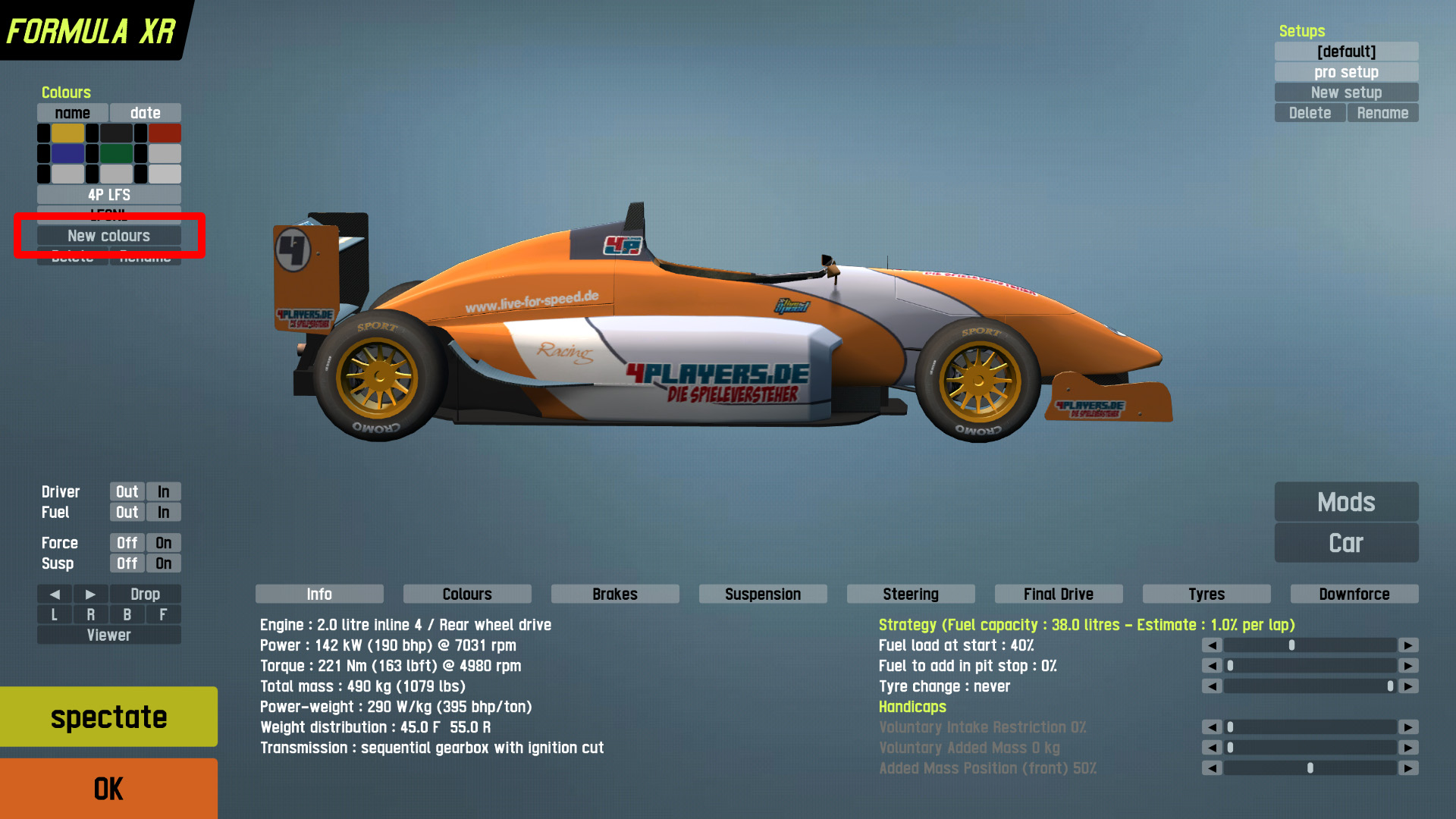 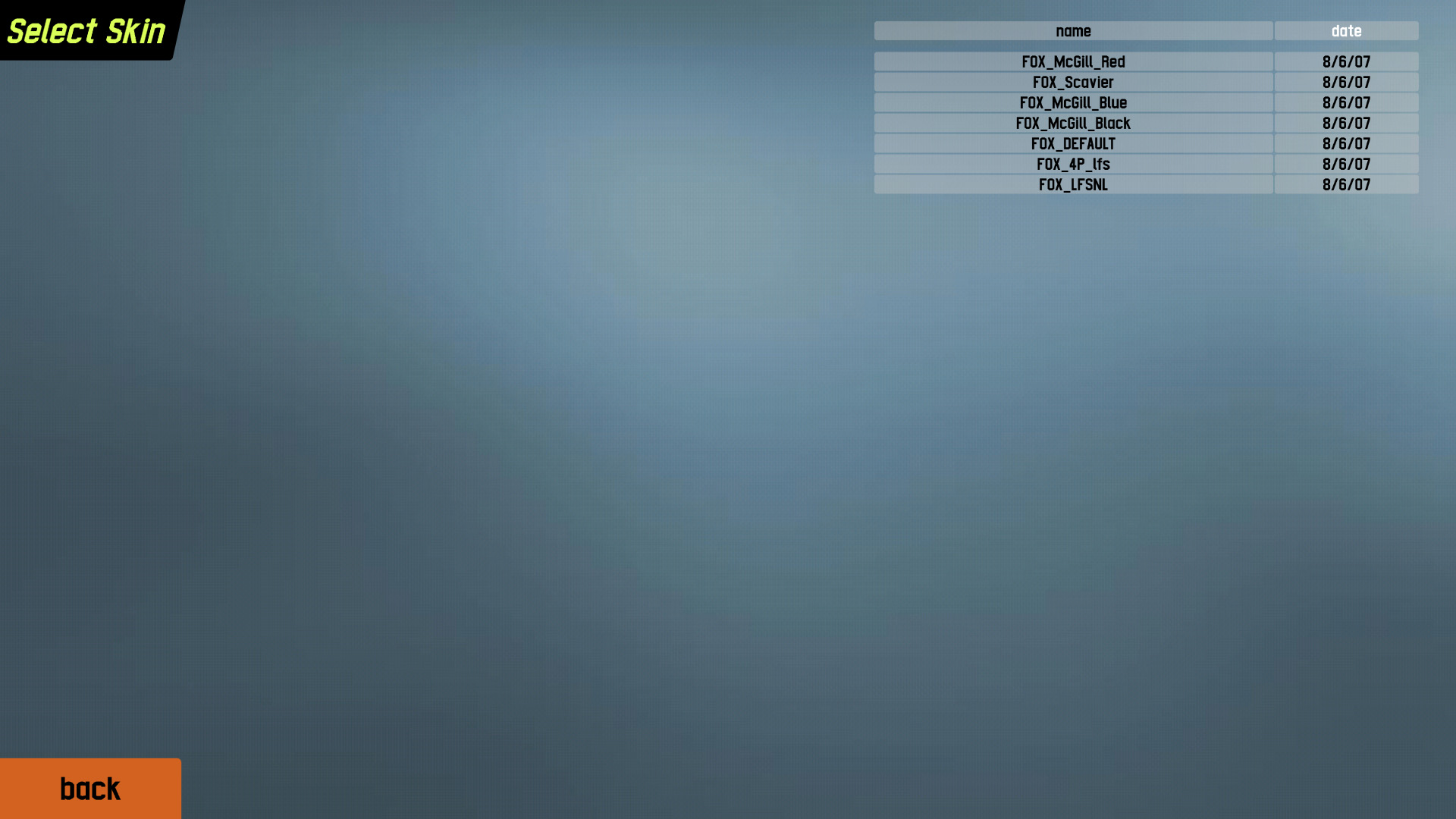 around the edges of the doors are some see-through gaps. (from inside and outside)
bug or because racecar?
Goran_MNE

Meybe i download skin in wrong format, i will check it again tomorow.
Flame CZE

You are right, I guess I could close the gaps.
Evolution_R

I spend few hours closing the gaps in the ETK, I do not enjoy doing that.

I check and everzthing is fine but still i cant see skin in game, there is only default skin.
Flame CZE 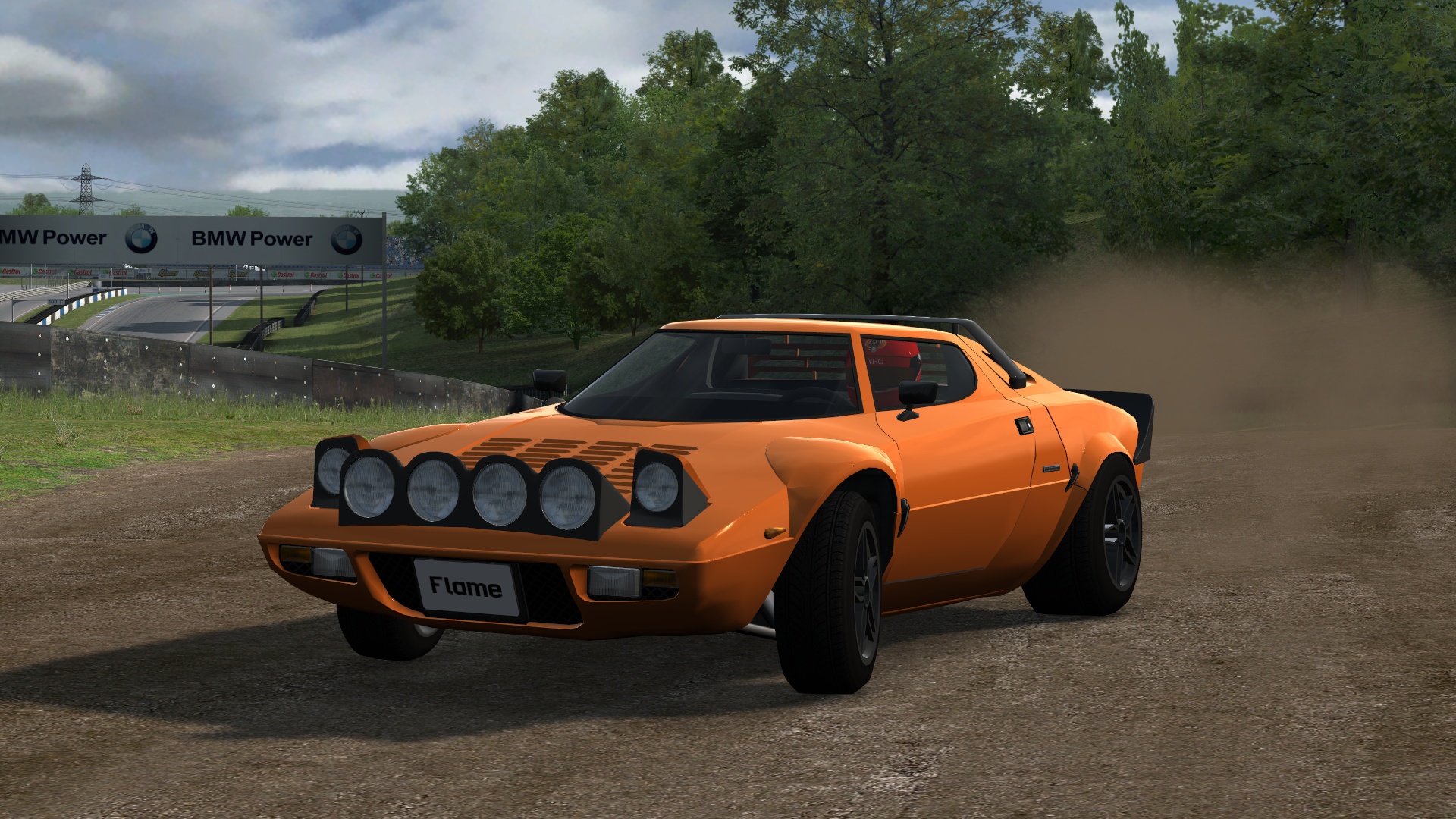 Dear Flame, this thing is so good but damn if it is hard to drive on tracks.
Meanwhile I still hope you will add slick tires, and:

- The central mirror could be prettier;

- Even more trivial: reducing rear height (not at the limit, still using reasonable values) and then bouncing the car, the tire can overlap the car body;

- This could be unfixable as it is caused by the shape of the car, but in rallycross tracks with other Acostas, from behind you can pass *under* other cars. The front is so pointy and low while the rear is so high, so it is a "perfect" scenario.
The LFS physics exagerates the effect a lot as usual unfortunately too.

Could this be at least reduced somehow? Maybe adding some almost-invisible points in the empty bottom part in the rear of the car?
On tracks it is harder to replicate, I suggest driving with AI on rallycross tracks and you will easily see what I mean.
Flame CZE

Thanks for the constructive feedback!

The internal mirror will be improved for sure. It is not very good looking especially in VR.

Regarding the minimum height, I hope this can be achieved by adjusting the "max up" value in editor. I'll see what I can do.

I will also try to improve the collision mesh to be more forgiving about rear impacts.
Flame CZE 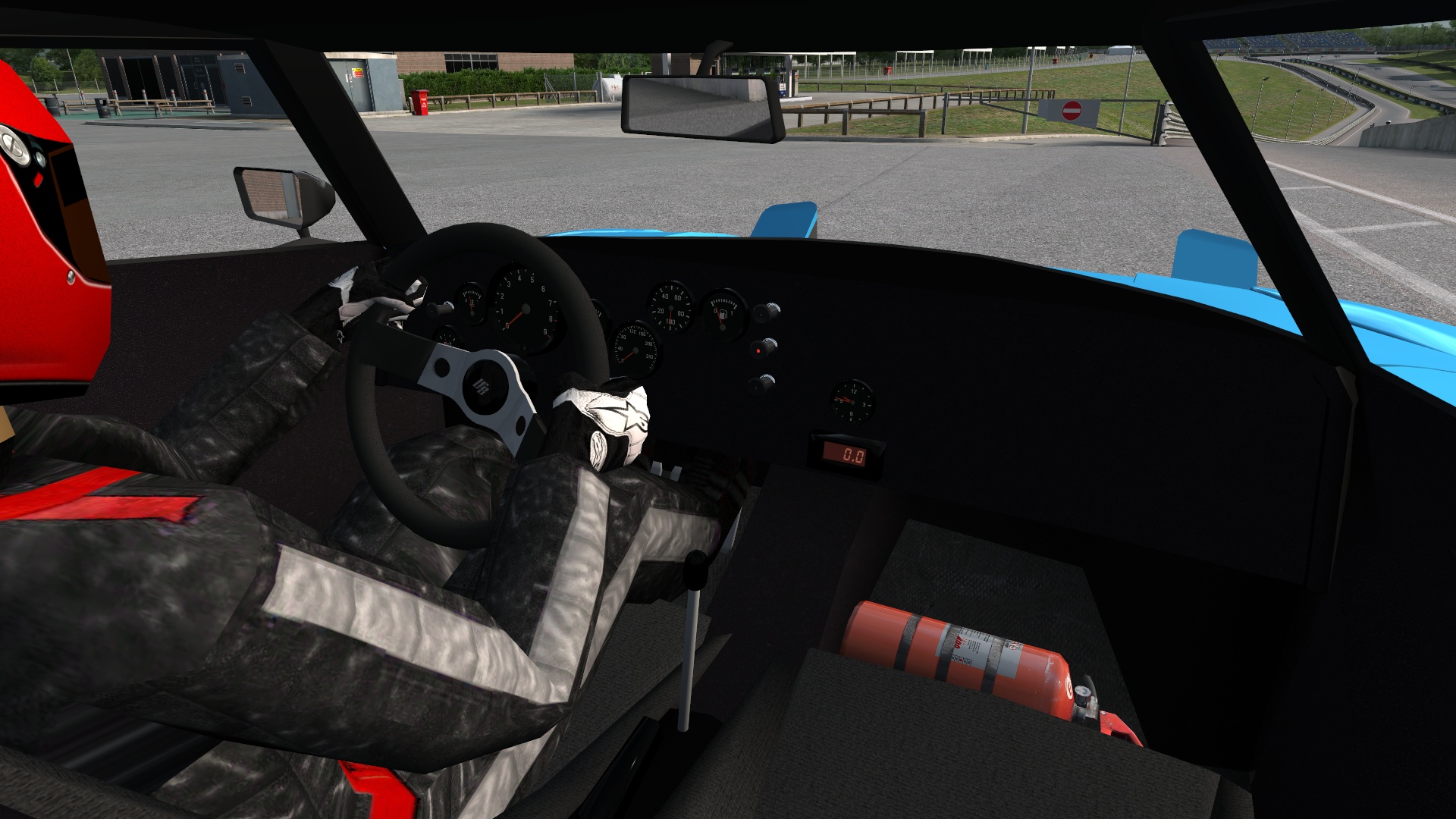