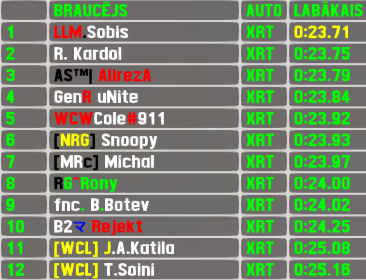 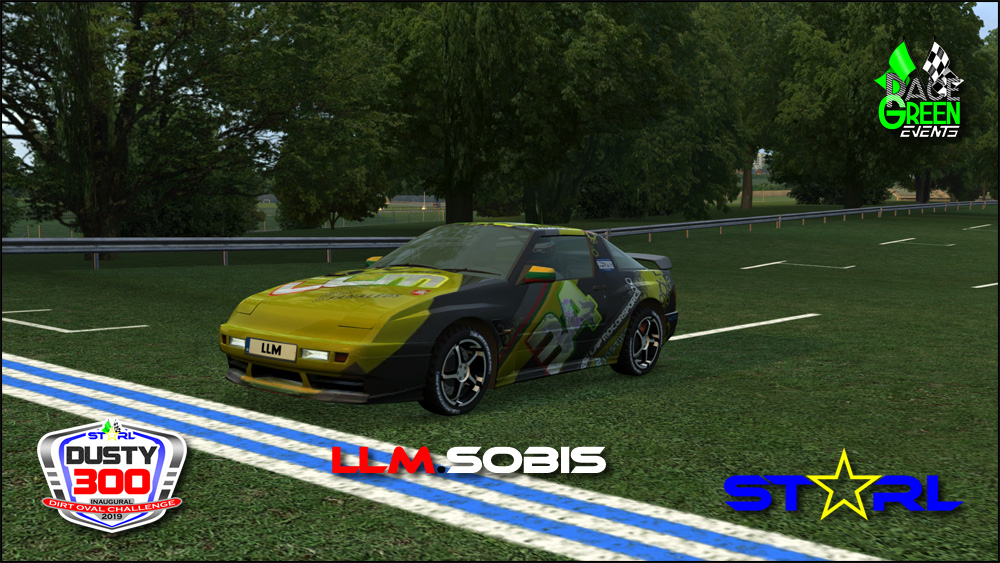 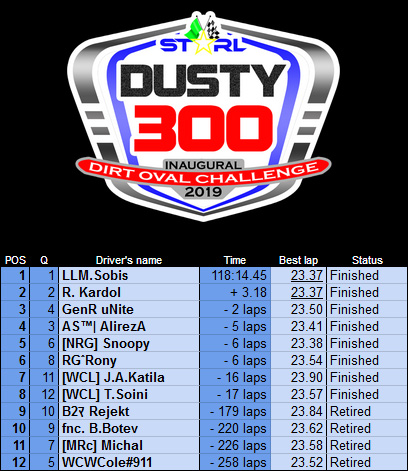 12 endurable men were ready to face the challenge of Race Green Events' all-time 2nd longest race (longest was Summer 1000 back in August 2014) and it's energy consuming 300 laps. Despite track having only 4 left turns,there was a lot of turning right - since the race was on unpaved surface,powersliding through the turns was the fastest way around the course.

Qualifying brought relatively slow laptimes as tyre temperature affects cornering speed also on dirt,while tyre warming here is very time consuming (need over 10 laps to bring tyres to optimal temperature),but conditions were the same for everyone. Sobis set the fastest lap,but R.Kardol secured the other front row position - the main candidates for race win were already showing their skills. After leading first 4 laps,Sobis lost his lead to charging R.Kardol,who did not gave up his leading position until final lap - he led 295 laps of 300 available. Sobis dropped back after being passed,but in later stage of the race increased his pace and started to reduce leader's advantage. It would most likely not have been enough for race win,but R.Kardol run out of fuel in turn 3,from which the slight uphill section starts - no chance to keep the lead. Sobis did help his opponent,pushed him until exit of turn 4 and then passed to take the chequered flag for race win. Unite finished 3rd 2 laps down,Alireza was 4th with 5 laps less completed,Snoopy closed up top5 another lap down - the latter was just 1 hundreth short of setting the fastest laptime. All 3 podium finishers and 6th place finished the distance without pitting,while rest had to use the pitlane,either for fuel or for repairs.

The new challenge has been now completed,now it's about 1 year time to decide if it's worth to repeat it (feel free to coment on this) or even add to official championship,probably adding another shorttrack oval to it. Even if the track would stay the same,drivers now know what to expect - despite track simplicity,it was a very tactical race. To be honest - organization wishes the option to limit car's fuel tanks to 45%,that would throw the fuel saving out of window and add normal pitting strategy with quite wide pitwindow.

2 weeks after the exclusive prologue round,the actual STARL championship will start with 1st round at Aston Cadet. No more dust,no more powerslides,less laps and distance - this should make the main championship more atractive to drivers wishing for more standart racing. Signups of course are still open until start of 4th round!
Sobis

I love this track - quite a lot different from anything else, it's full of close racing and even with 8 of us (more at the beginning) it was fun. There's always someone close by (at least physically) so it isn't monotonous at all. I'd like to see more of this and I'm OK with this being in the official championship. I enjoy oval.
rik97

Yh it was fun to drive it. It is a lot harder to race this track as you lap most of the cars multiple times. There isn't just only 1 line you can take, escpecially while in a battle for position.

A championship would be cool 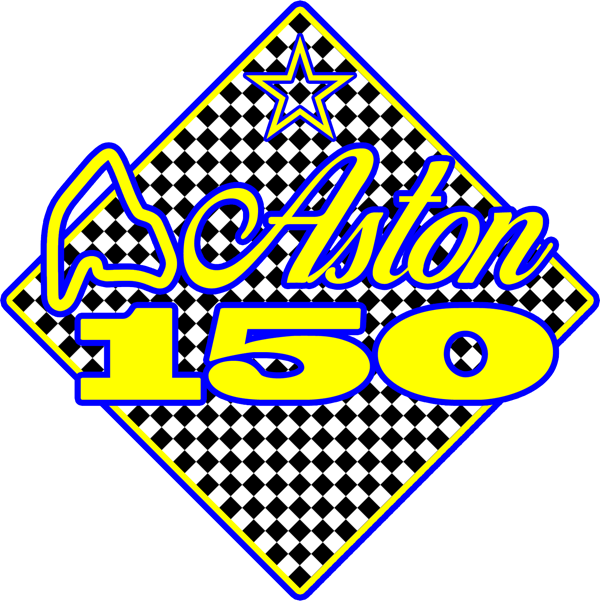 After the tough race at dirt oval,the actual STARL championship starts this sunday with a race at Aston. It will be the shortest official configuration named Cadet,which will host the 1st race in chase for championship. The track features 2 realistic overtaking opportunities despite being short enough to be completed under minute constantly. Again - traffic will be a factor here,not as much as in the prologue round,but will have it's effect as 1 second average laptime difference to leader means that you'll be lapped for sure.

Only thing left is to make points system - currently there are 21 signups,which tend to consider same points system as in AWS - 15 points for win,13 for 2nd,11 for 3rd and 1 less for each next position. As always in RGE leagues,everyone completing the required minimum distance (2/3 in STARL) will receive a point towards championship even if finished outside top 12,while also bonus points for best laptimes in both sessions will be awarded. Everyone is welcome to make an input for this.

New entries will receive PM eventually at some point during saturday/sunday.


Also - points system has been added to main post!
Huseyin41

After little research I found out that there has been race at this track using XRTs (with 1% restrictor) while having 2 FXOs in the mix,the race even had the same distance - 81 laps. Official results are vanished from dropbox though,but plain LFS results still available in LFSW online race results. During race there were few too many incidents,feel free to watch livestream recording and search for action in the 2+ hours video. Info tread consisting mostly from post race discussions here.

Seeing action on track in RGE events,I tend to think we have really low chances something like that repeating tomorrow as culture level on track latelly has improved and drivers seem to respect their competition much more. But still I wanted to post info about an old race also for purely statistical reasons and as a little warning how can a short circuit affect hot tempers. Race Green = Race clean!
Spiiiky

Was tyre physics different back in 2012? The race pace they had was absolutely sick. I can't imagine how they would have reasonable tyre temperatures after 4-5 laps with these lap times.
redbot_

https://www.lfs.net/forum/thread/74873-New-Version-%3A-0-6B - this was the active patch during the time of that race iirc (EDIT: well, in that post Rony linked to it says it was actually 0.6E

I think the tyre physics last changed when BF1 was introduced(Patch S, T?) and in 0.5U they improved the suspension to withstand more force, this is 2006 though. In Patch Y at 07/08 they reworked the physics a bit when they introduced the FBM, but after that they haven't really changed around much.

That is the time when "serious" league racing was still active and there was a handful of very talented drivers, so the pace looks really fast for current physics but I believe they havent changed during those years. best lap in that race by kart-36 was 0.4 sec off the WR, and he has a hotlap in LFSW in same combo that is 0.03 away from the WR time. and NIKI for example, over half of his online stats and mileage comes from driving XRT, he was properly quick with it.

Have to cancel my signup for STARLeauge. Will not be able to race on sundays for a cuople of months.
texxxas 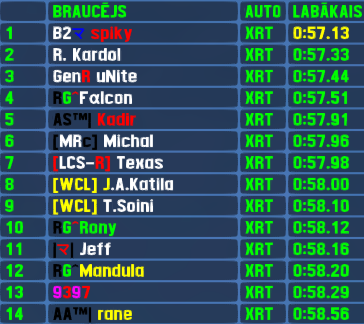 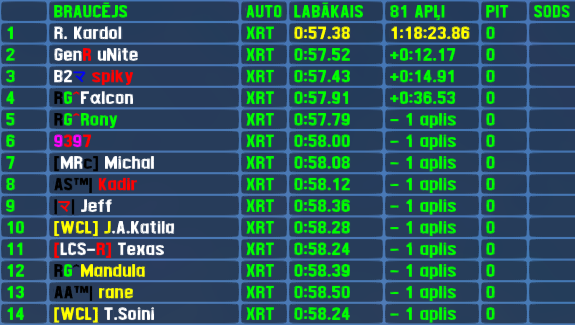 one thing that was weird and probably only Rik and me realized was that 2nd grid slot was in front of first slot https://imgur.com/a/1wTFPVB. not sure if this is common bug in AS1 or custom grid was the problem...
Mikus1212

I used custom grid as in STARL I made all grids but the one for next round with even rows. Seems like I made a mistake by marking grid spots - both front row spots were marked as "2",while the left should have been marked as "1". That's why polesitter started from original 1st position,while everyone else from custom positions.
Luckily at start everything went in right positions,so case closed (let's sweep this little dirt under the carpet).

ooops! Its btw disturbing how easily the indexes go wrong in custom grids while editing. Watching the start from mpr, Rik said "huh, im not in pole" just before green lights. Even looks like he delayed his start.
rik97

Yeah I said it was wrong and was because of that slow away from the start. But as Spiky got the lead and there was no protest from other I was fine with it.
Eclipsed 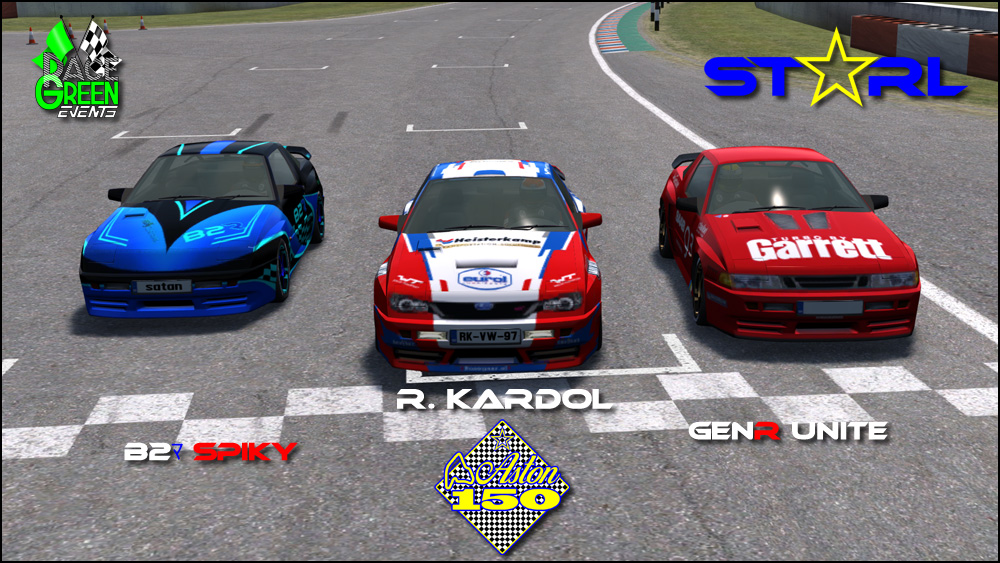 The championship for the shorttrack racing "king" title has begun,there was proper shorttrack racing in the 1st round - a lot of nose-to-tail action,passes,chases,mistakes... The polesitter Spiky took the 1st turn first and kept the lead for 12 laps,where the chasing duo of Unite and R.Kardol slipped by - it was Unite,who set up the pass,but R.Kardol used situation for his own interests and passed Unite right after his pass. That was pass for the lead that never was given away - R.Kardol was able to increase the gap relatively constantly for the remaining 69 laps and crossed the finish line as the winner of 1st ever STARL championship round. Unite finished 2nd just 2 seconds ahead of Spiky. 4th place finisher Falcon was the last driver on the lead lap,his teammate Rony completed top5.

After round 1 the standings are of course the same as finishing positions,just the gaps are worth to mention - R.Kardol enjoys 3 points lead over Unite,3rd place Spiky is just 1 point behind 2nd.

With only 2 multidriver teams attending 1st round,the lead in teams championship table has been taken by team having it's 2 highest drivers finishing 4th and 5th - Race Green Autosports. RGA leads yes motorsports by 6 points and B2R by 7.

Nations table is differently mixed up - Finland's highest finishers were 2nd and 6th,which scores them 21 points. That's 5 more than single driver represented Netherlands and 9 more than Slovakia (both of these nations have never been on podium position at any RGE sanctioned championship series).

As usually 2 weeks break between rounds in RGE leagues,then the longest configuration of the season awaits - the custom built 8-track layed out on Kyoto Oval's main straight and turn 1. This track features a bit controversial chicane under the bridge,which strikes problems if driven over too agessively. It's up to drivers themselves to find the safest line through the chicane - best solution might be to keep turn's outside wheels on the concrete and let only inside wheels go over the curbs,anything else might cause suspension damage on longer term. Rest of the track features more problems for driver than car - 2 180° harpins and the start/finish curve,where the slippery concrete will try to make car's rear pass it's front.
1
2
34
This thread is closed