Best phone I've ever had! Linux works very well on mobile platforms too! Best phone ever. The camera is amazing! I took like about 4 GB worth of pictures/videos.
Blas89

Pearl Flip the great! (Ah well, not so great, the provider is repairing it :/. The battery got busted and wouldnt last more than one day )
logitekg25 i had an enV touch, and i treated it like gold, and loved that thing..but one day i was biking on the sidewalk, and texting (i often text and ride, cause it really isnt that hard on flat) when i had to swerve to avoid somthing, and the phone fell, and i tried to catch it but i just batted it into the street where a car ran it over

Had my chocolate touch a little over a week or so now, and I am really happy with it! It may not have the ability to keep up with most smart phones now a days, but it impresses me everyday with the texting, camera and phone reception, not to mention the battery life is amazing. Plus the music player is bar none! Doesn't hurt its a pretty good looking phone!

I found an iphone4 haha
Takumi_lfs 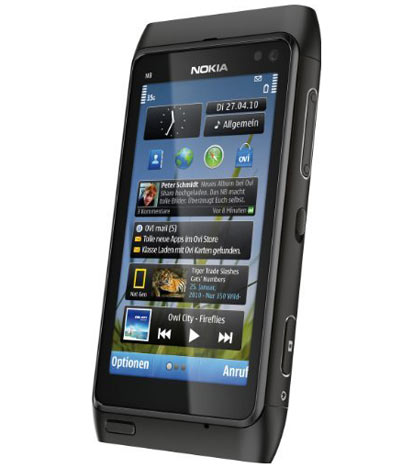 I am really, really happy and satiafied with it! It's quite awesome
Boris Lozac

I love the design, but to give that money for a dying Symbian... i don't know.
mr_x

They should have put Maemo on it like the N900. 9 months on with the N900, still loving it - I usually get bored of phones by 6 months, can't see the N900 heading that way. Mozilla released Firefox 4 for it, so got that synced with my PC Firefox - all bookmarks from PC on my phone

With all the new updates and features of the new Symbian, you'll be quite impressed. People think Symbian is dying; it's not. It may not have as much support from big developers (gameloft is one of them) butceven those have released dozen (actually more) games for Symbian. There are so many great apps, so many things you can do and so many features that even having a lot of great apps (I have 287 currently installed on my phone), though a bit less games than other platforms, that just makes the trade (games for features) worth it.

You know, without Symbian, you just can't get home, gather all your family, just plug the phone via HDMI on the TV and instantly show all your travel photos, make slideshows and play music, also with the ability to sing karaoke and watch movies, all from the comfort of your sofa using a remote control. Then you can go play some games using the same remote control or the Wiimote!
That alone made me want this phone a lot. And combined with all of its other features and build quality, and also promises from Nokia to spend the whole year 2011 updating it, providing new apps, encouraging developers to use Qt, and giving it a whole new interface (PR 3.0 is coming this year!), I just decided purchasing it would great, and I'm impressed and not disappointed.

Gorilla glass AMOLED 3,5" multitouch capacitive screen (really beautiful)
Anodized alluminium body (feels great)
HDMI, compass, accelerometer, light and proximity sensors, gps two mics (used for many things including stereo audio recording and noise cancelling)
3,5mm connector for connection of TV out, speakers, ear phones and microphones
Incredible camera with very high quality that has exceeded the performance and quality of all of my family's previous dedicated digital cameras (all of them: 8mp ones, 12mp ones, 14mp ones, and even expensive sony equipment). The only thing it did not exceed was (understandably) the complex and huge lens from this sony camera (and optical zoom). Apart from that, the 28mm wide angle tessar carl zeiss lens with huge sensor (biggest ever put in a phone) and xenon flash is still unrivailed. LG tried to come up with an "optimus" something that should record in 1080p (N8 does 720p), but the quality of the optimus both in 1080p and 720p just cannot provide more clarity, detail and quality, because resolution alone means nothing.

USB on the go (USB Host) providing the ability to pretty much plug anything on the phone's USB and use it normally like you'd do on a pc (plug-and-play, I tried myself and it's working: wired kb and mouse, wireless kb and mouse, pen drives, external HDD, printer, usb fan, usb light thingy, usb speakers, digital cameras and even other mobile phones! It works in many modes and even lets you use the N8 to charge other devices and phones via USB!)
To keep this post "short", I'll just leave this here: etc.

Posted from Opera Mobile 11 on my Nokia N8
Takumi_lfs

Nokia and symbian is gay.. Thats a fact.
DevilDare

Sorry to be blunt - but Symbian is dead.

We've got to the stage where people aren't just buying phones for what it does "out of the box", but for other stuff you can do with third party apps. And without a large market share, nobody's going to write the killer apps to sell your platform, and so it will slide away.

Windows Mobile had it's chance, but the rest of the technology (i.e. 3G data, low priced internet) wasn't there to push it forward, and so HTC (who made most WiMo phones) are slowly reducing the amount of phones they make with it on, so I can see it going the same way.

iOS came along and made the "want", and then Android came along to create the "realistic / affordable" product most people could actually afford... and that will keep them the two on top for a while.

Blackberry... well it's in a niche. Unfortunately, most people who buy them don't actually have requirements that it fulfills so either expect them to change their lineup quite a lot (which they are doing...) or die.

Exactly the same happened to desktop PC architectures - imagine if Dell made an i7 laptop that cost £300 and lasted for 6 hours on a charge, but couldn't run *any* apps currently available? They'd sell quite a lot for 6 months, then the platform would stagnate and then Dell would quietly drop it... the same has happened (or is happening) to Maemo.
dadge

i have to agree with Jakq. Symbian has been nothing but trouble for me. for example, at least 3 times a week when i try to make a call, my phone (or Symbian for this matter) would tell me that "this feature is not supported with this software release". i mean come on, i'm only trying to make a call on a phone. my next phone is going to be something basic and then i'm going to get me an android tablet. like the Archos 7 v2.
Last edited by dadge, Wed, 23 Mar 2011 00:25.
Boris Lozac

I'd gladly work for Nokia if they hired me

In my opinion, there's not a problem with Symbian. The OS is great, fully featured and works just fine; the problem has always been with Nokia. I've been reading a lot about this matter and I can easily get to the conclusion that, if Nokia hadn't messed up SO MUCH, things would be different. Their internal organization was non-existant, their developer teams created many kinds of software and new User Interfaces; all of them incompatible with each other. They had internal competition to develop each of them their little softwares, without even caring about compatibility at all. Too many projects have been dropped, the UIs (which actually looked great and seemed to work well) could never be implemented anywhere and were also cancelled. Their developers started to make apps in widget format (slower, didn't take advantage of system hardware, looked worse, didn't have transitions, used web code and ran on the old symbian webkit browser) and release phones with these apps (N97, the Nokia disaster). Things didn't need to be like that...

And now that their teams are finally organized, the company has a programming framework that lets developers code once and deploy for all phones, and constant system updates are coming in, a new CEO from Microsoft comes in and announces "we're gonna change our OS for one without multitasking, without copy and paste, without anything all other mobile OS currently have, with few to no apps, but it's better because Symbian is a sinking ship, even though it has everything WP7 doesn't have."

I think this may be the last year of new apps and evolution of Symbian, but I'll definitely try to take the most out of it (like I'm already doing) and I hope (and believe) my N8 will last several years to come!
I think Symbian for smartphones is just like Windows 7 for tablets: it's the perfect platform, just needs a new UI for touch and developer support (specially the big ones)... I don't really think developers will suddenly start developing for WP7 just because Nokia is now producing them.
GuRu_PL