your next project will be scirocco studie R .
Boekanier 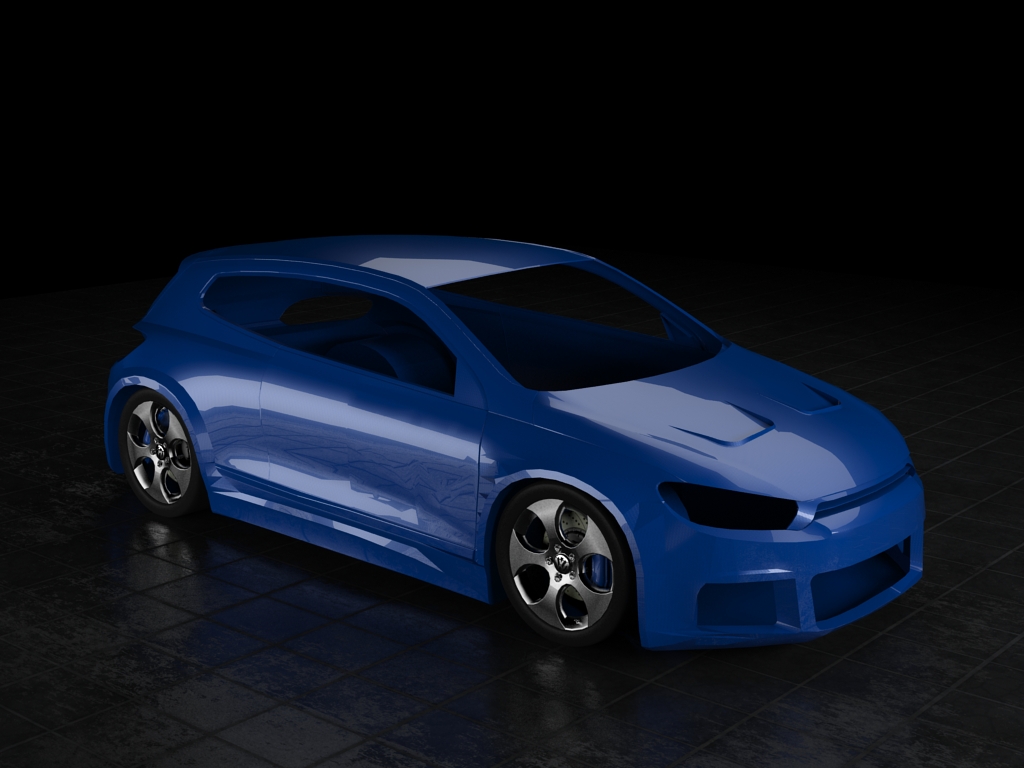 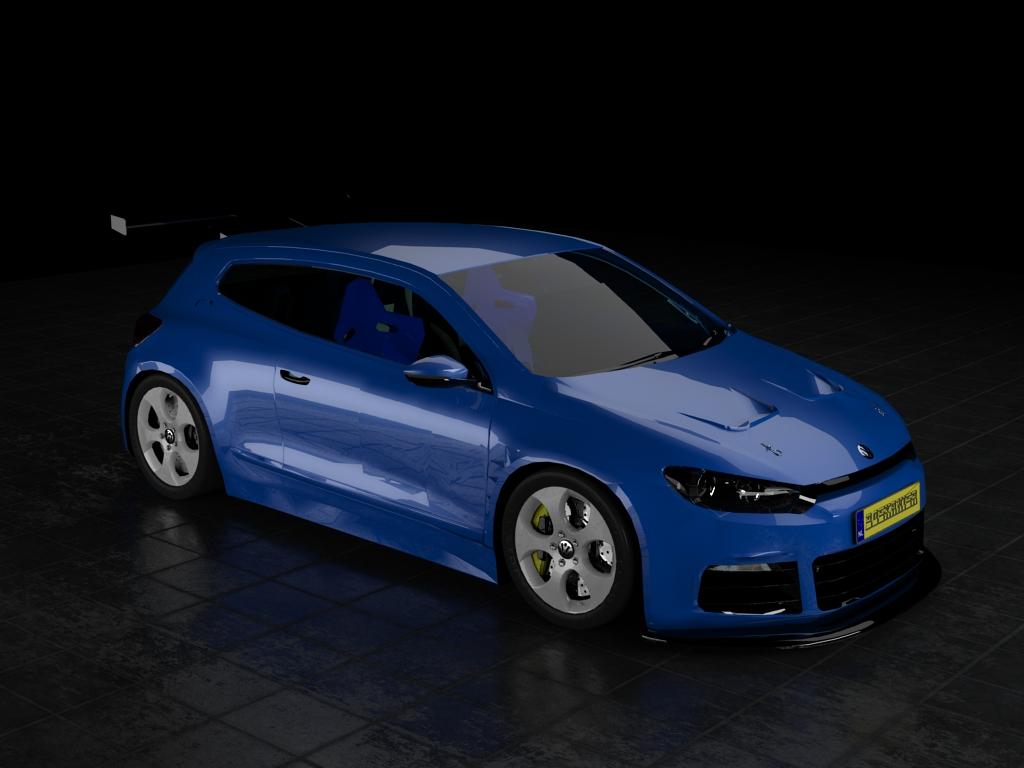 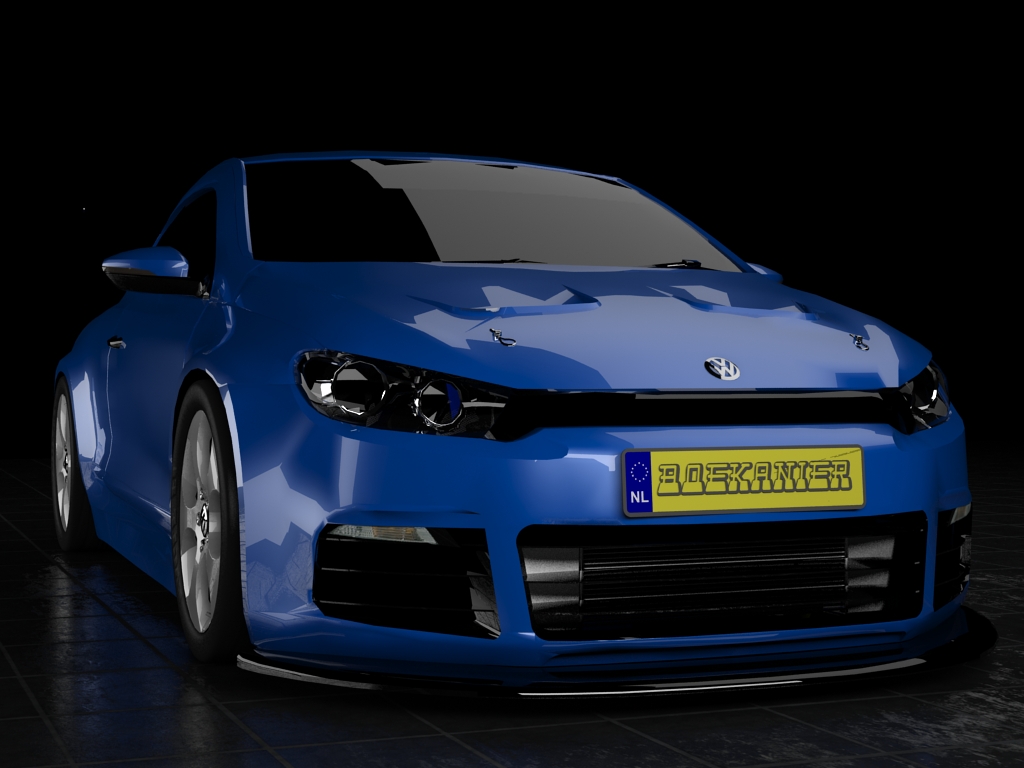 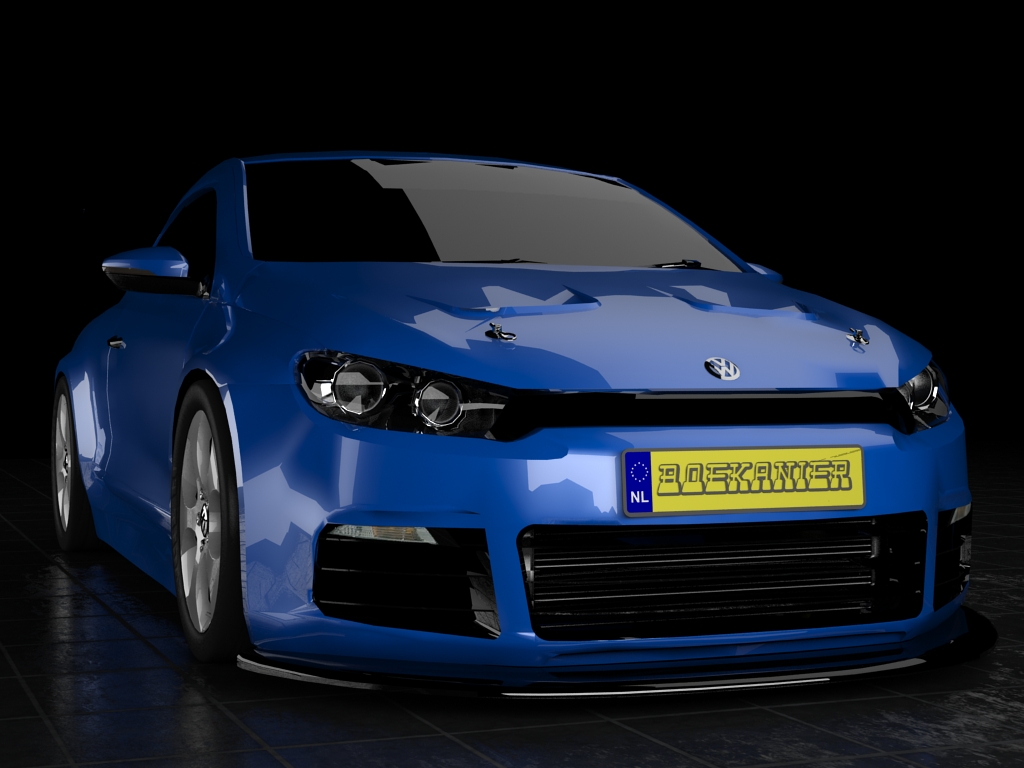 Then it is quite good. And I like to color.

Hmm, I doubt this is a taste, it's a riced out car I see every day on the race track near me, sjonnie, much?
Boekanier 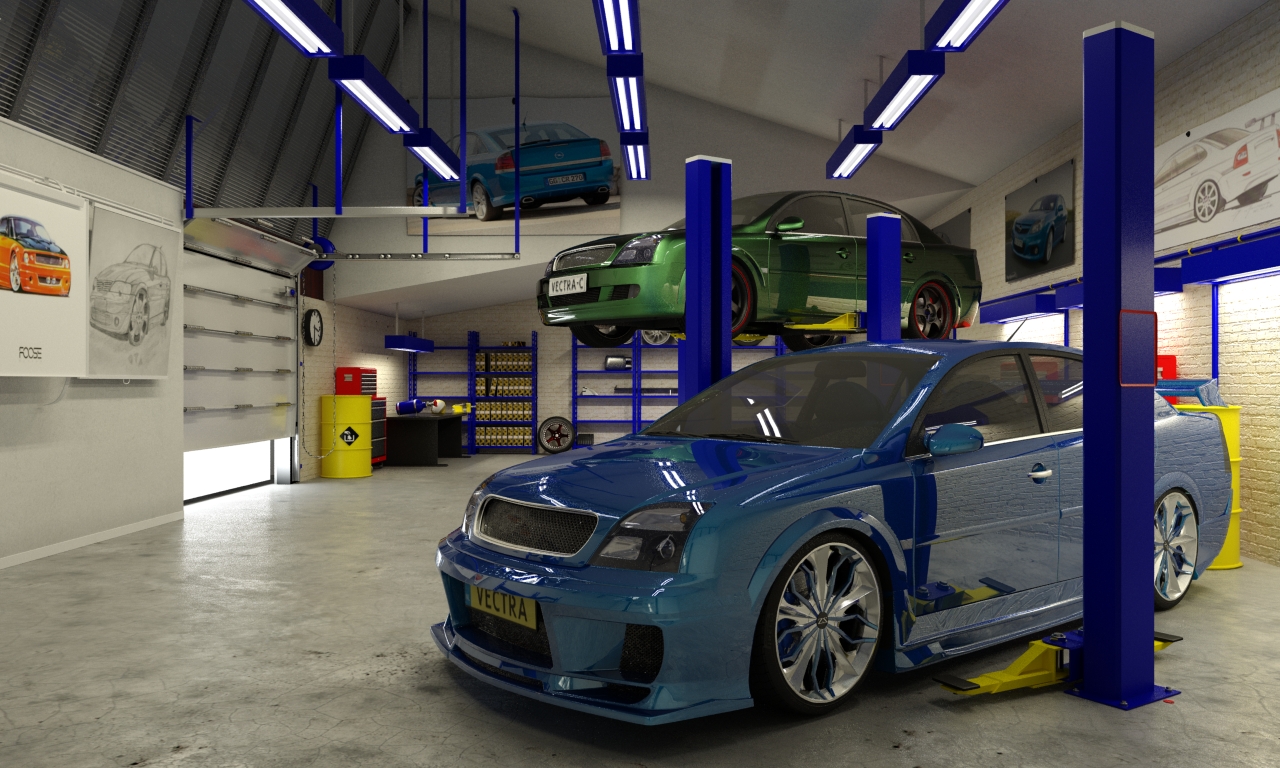 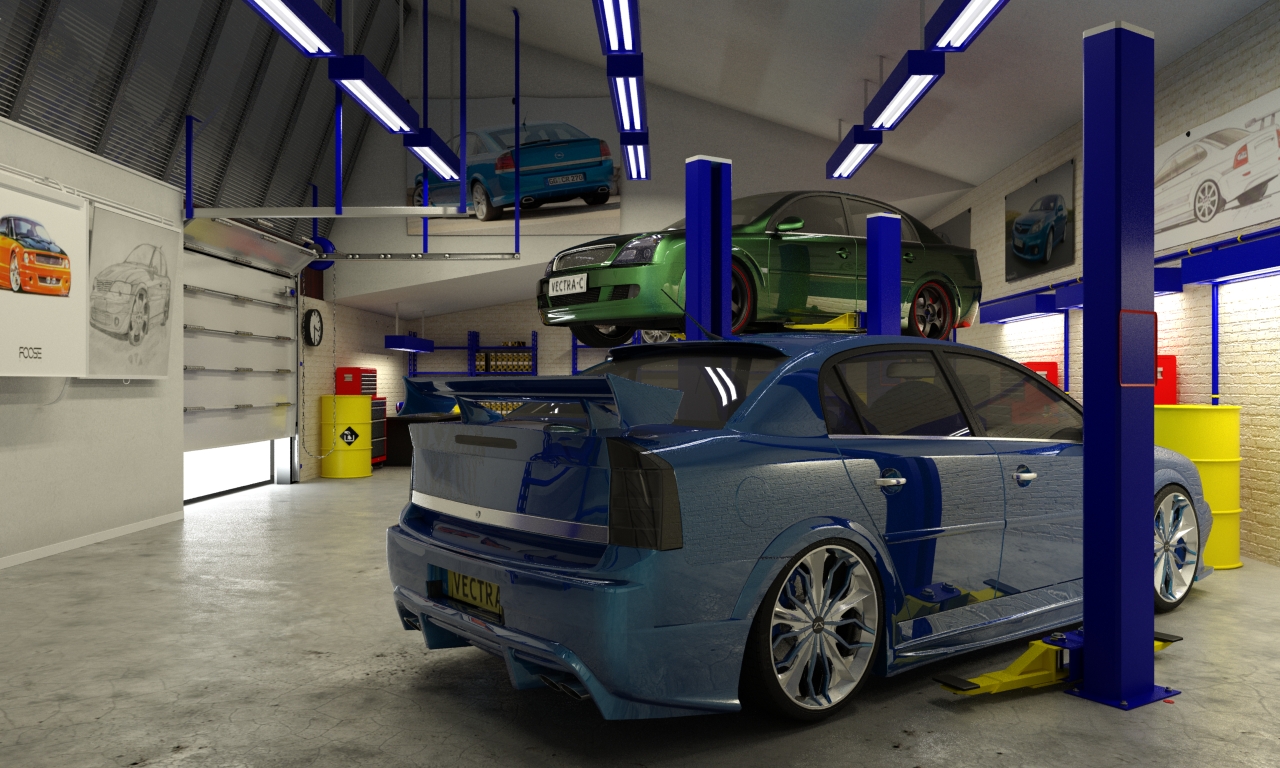 Who's the man? You're the man...
Boekanier

One thing if I may

You should lower the saturation on the blue lifts. They are too saturated and that makes them look less realistic.
FireMike15

i will try. thx 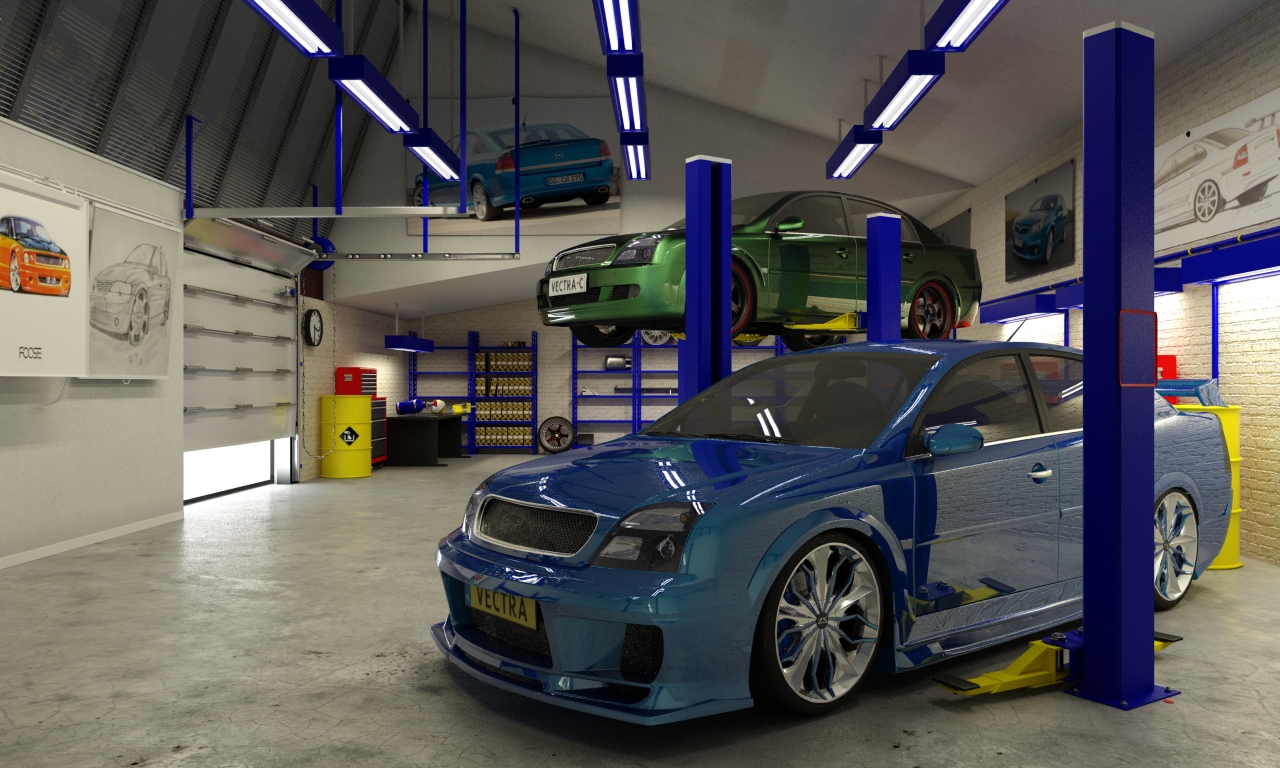 Far from it. You just changed the reflection settings, yah? You need to change the color. Try reducing the saturation by 10-20%
bmwe30m3

And I think that the car paint reflects too much, like a mirror.
matijapkc

It's pearlescent. Hope I spelled it correctly.
tristancliffe

Pearlescent has nothing to do with reflectivity.
r4ptor

This Toyota has stronger effect, but lesser reflection. What does that teach us?

Edit: Meh, Tristan beat me too it :P
logitekg25

its cleaned, and waxed

cars get quite shiny when waxed

about the car paint reflects too much. 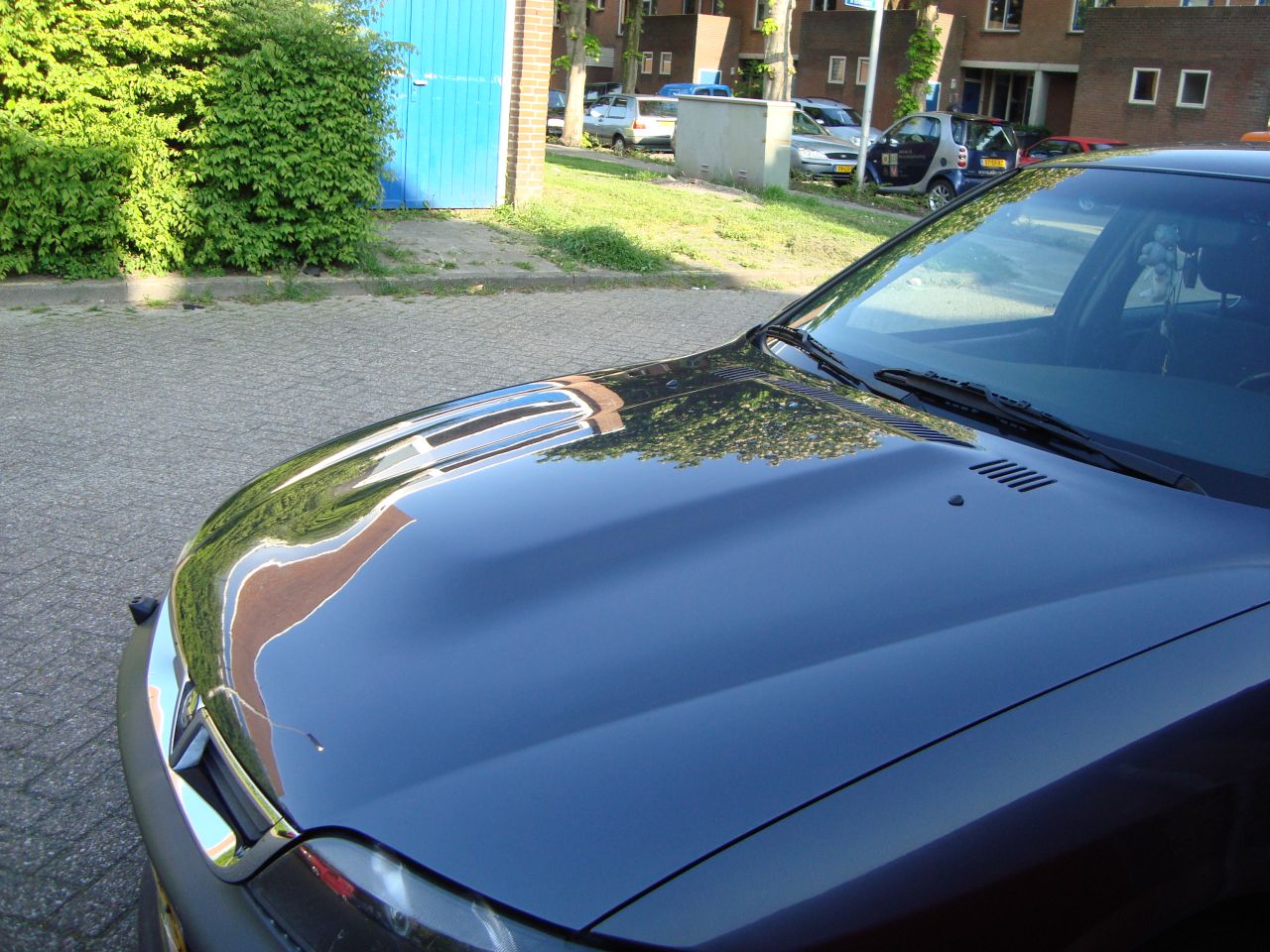 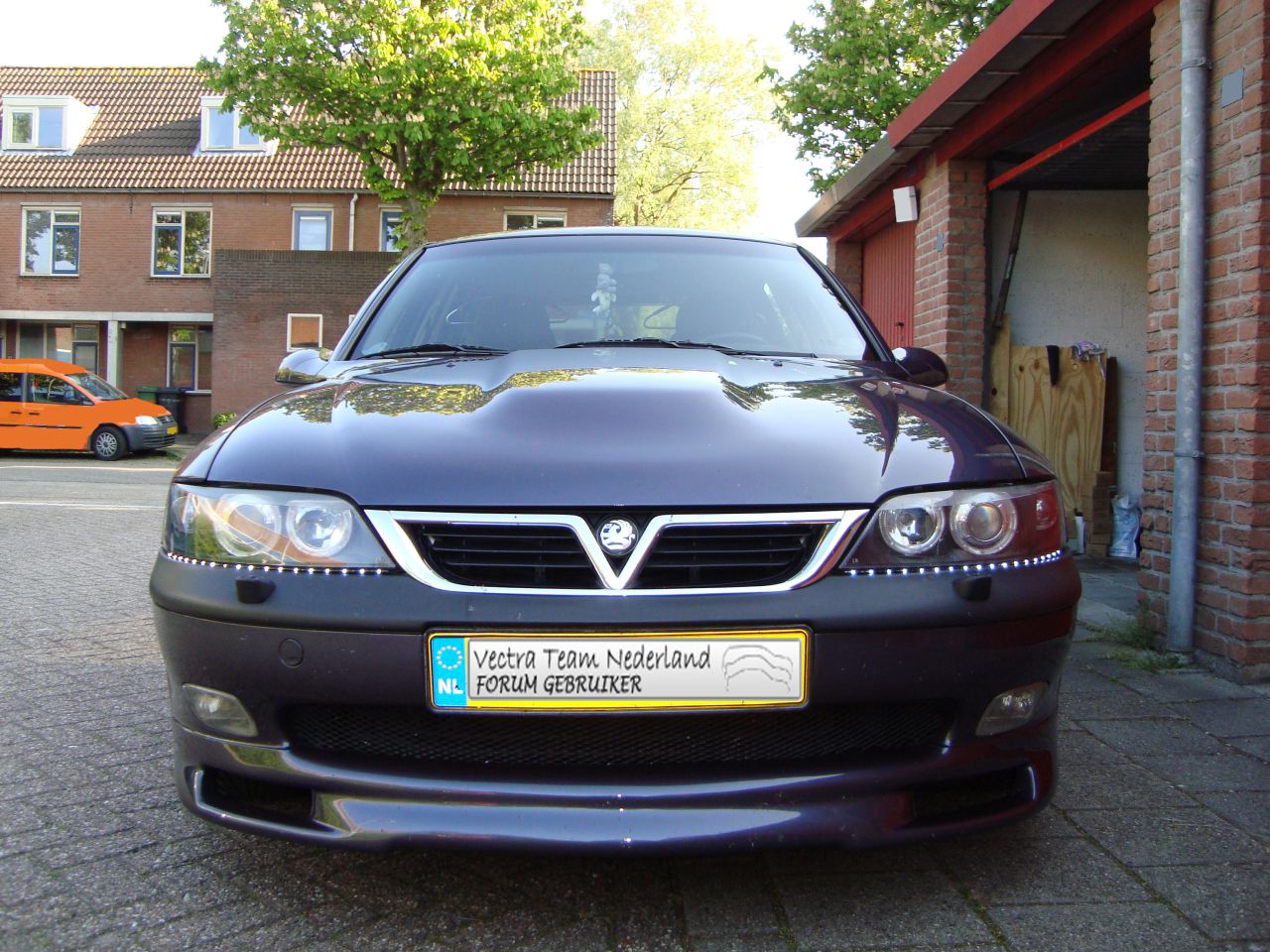 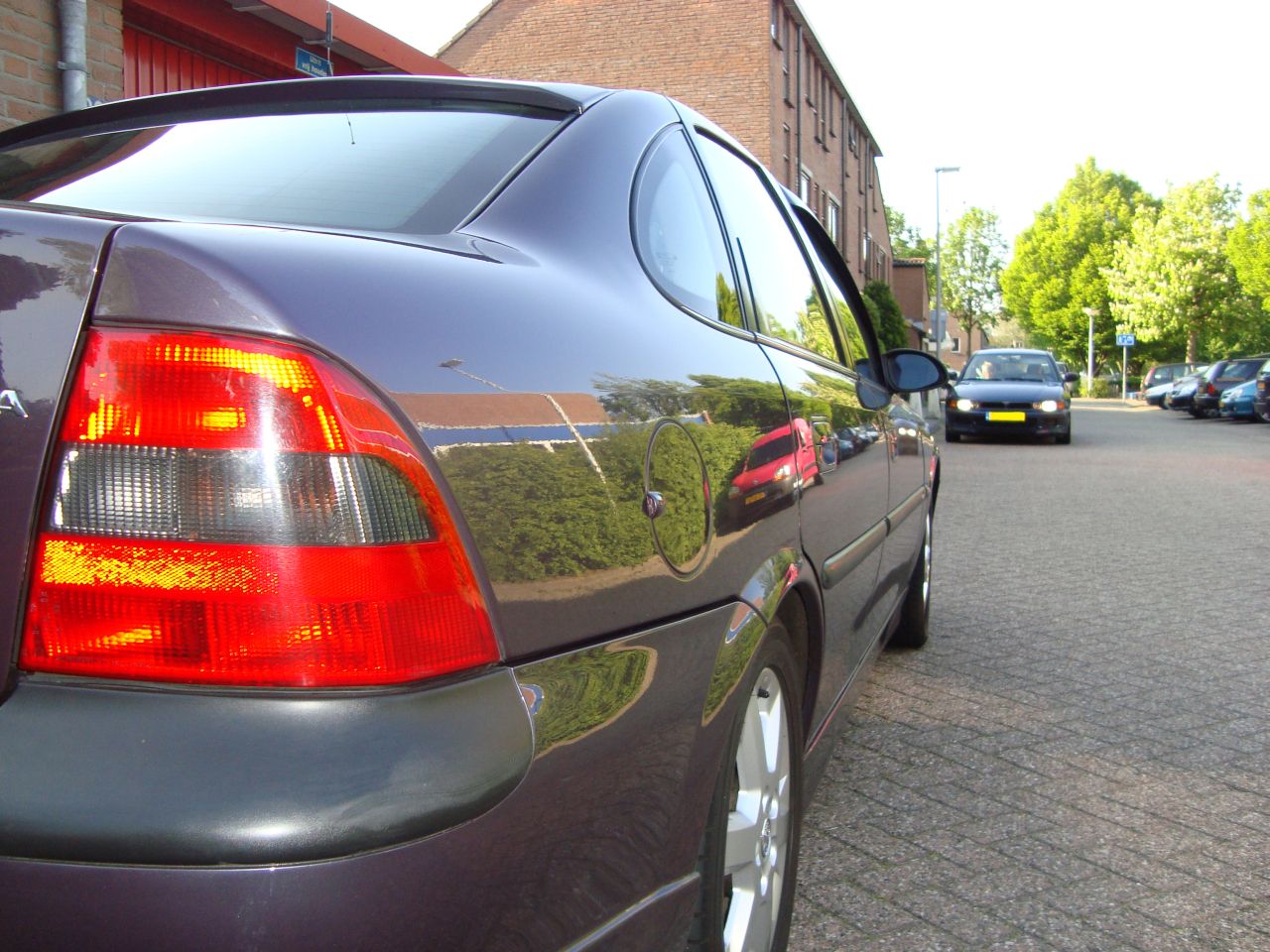 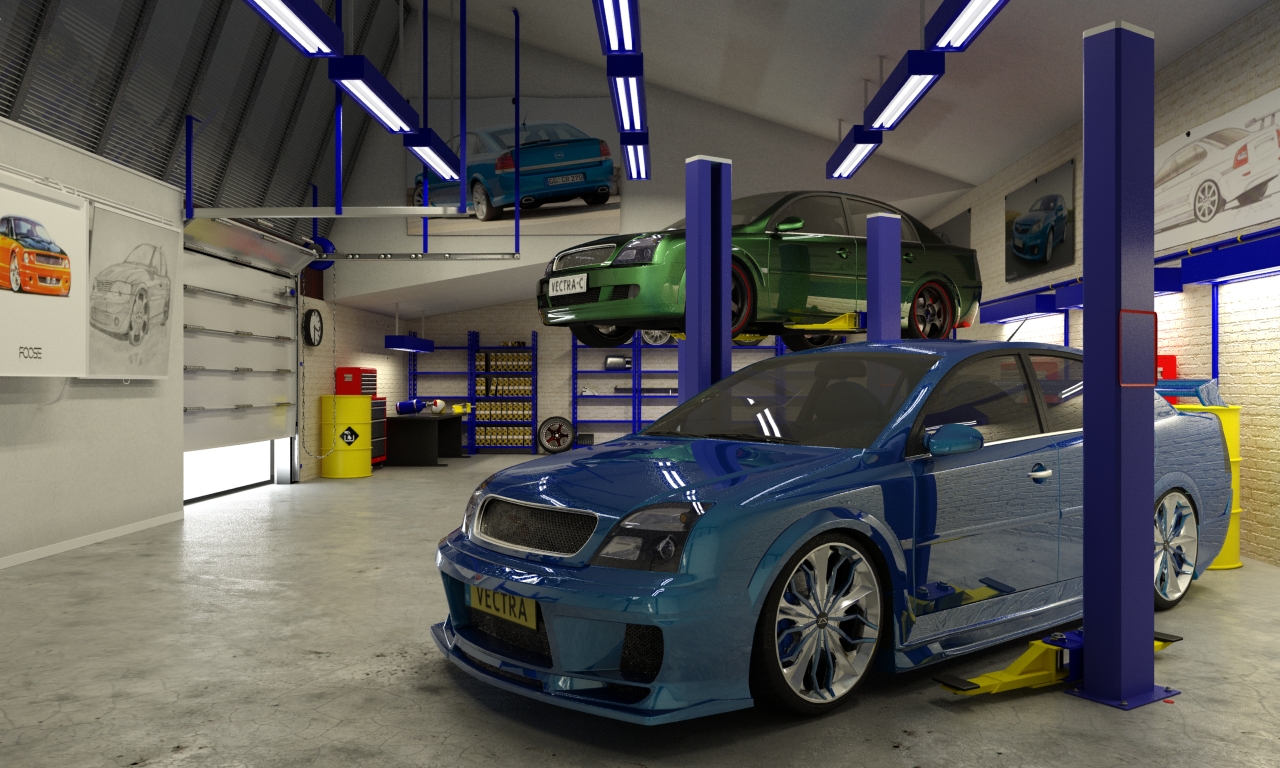 I didn't comment on this because it could be a style thing - but since it's not:

It is indeed reflecting too much. You need to look at as many different photos as possibly, while making sure they are somewhat close to your scene. Using outdoors pics as references isn't always good when you are doing indoor lighting. You can do it, but it can be difficult and timeconsuming because cameras are different. Lighting conditions are different and the settings on the cameras, which can have an huge impact on how things look, are different.

The exposure on the cameras on your reference pics are all set to catch detail in the "low light" areas - 2 of the pics show no detail in the sky, and the one without any sky shows unnatural looking grass - so how can you know for sure you can trust the reflections are correct too? :P None of what you see in those pics will look like that if you looked at the same thing while being there yourself - but that's just because human eye pwns

Cam is set to capture "shadow" detail - that means sky gets bright and washed out.

This one captures details in the sky, but now the stadium lacks detail.

Human eyes are much better than this though and will see more (but they are not perfect). Most cameras, even the expensive ones sucks compared to the human eye - but the human eye balances out things. It won't make something brighter and something else darker for you to see... well, it will, but not as much.

With cameras you adjust exposure to get what you want. But even if you set the camera to catch reflections on a car, you can't entirely trust it unless you took the photo yourself, and you know what you are doing.

http://richardxthripp.thripp.c ... hotos/skys-camouflage.jpg
This photo was most likely shopped, but not by adding the clouds. Those are visible because of the exposure setting on the camera, and we should be able to agree that reflections are not that dramatic on a typical car paint.

Another fun example:
http://i19.photobucket.com/alb ... 58/brightfish/highexp.jpg
This also shows how big impact exposure can have. The light from the car is so bright that it turns the garage port and the side completely white - but... car light during daytime = completely useless. It will barely light anything up at all.

So, exposure is a big thing and it's important to "read" the reference image properly, because different pics are taken using different exposures. Light and angle is different etc.


Something else:
Reflection on most surfaces - especially on cars, are heavier on the steep angles. the more parallel the angle gets, the more reflection you will see. It's true for many many things, including something as odd as paper - or something more commonly known like water. You can see the bottom of a shallow lake, but if you look towards the horizon, then you'll see the reflection of the sky.

This is often refered to as Fresnel effect/reflection in 3D. I think maybe in 3ds it's called reflection falloff? You may have some already on your car material, but the "facing" reflection is too strong.

A bit long explanation - I hope it made sense.


Myeh, closer. It's better though.. IMO. They could now use some dirt. Slap on some random fractal texture and it should work. Maybe you should do the same with the yellow barrels.
Last edited by r4ptor, Fri, 28 May 2010 23:17.
Boekanier

Thank you for your explanation.
it's not too long.
I still miss is: what color you use.
light color or dark color.
This also makes a difference with reflections.

back to my rendering.
I will play more.
because you are right now everything is too clean.
r4ptor

I can't say for sure since I don't use 3DS. I'd guess you need to change the dark one and make it darker. but i could be wrong. Are you still using mental ray? What shader do you have applied?. I use mr a lot, so I can help you out if you use it too, and tell me what shader you are using (if its a mr shader).
Boekanier

Thanks for helping.
This time i used v-ray

I made a print screen so you can see what color i use and some settings.
maby you can do somting with it.

i know now what you mean to chance the colors.
the colors are too bright for a garage.
r4ptor

I think you forgot to attach the screenie

sorry for the late response.
but my browser was odd

do you get when you get older
You forget sometimes. 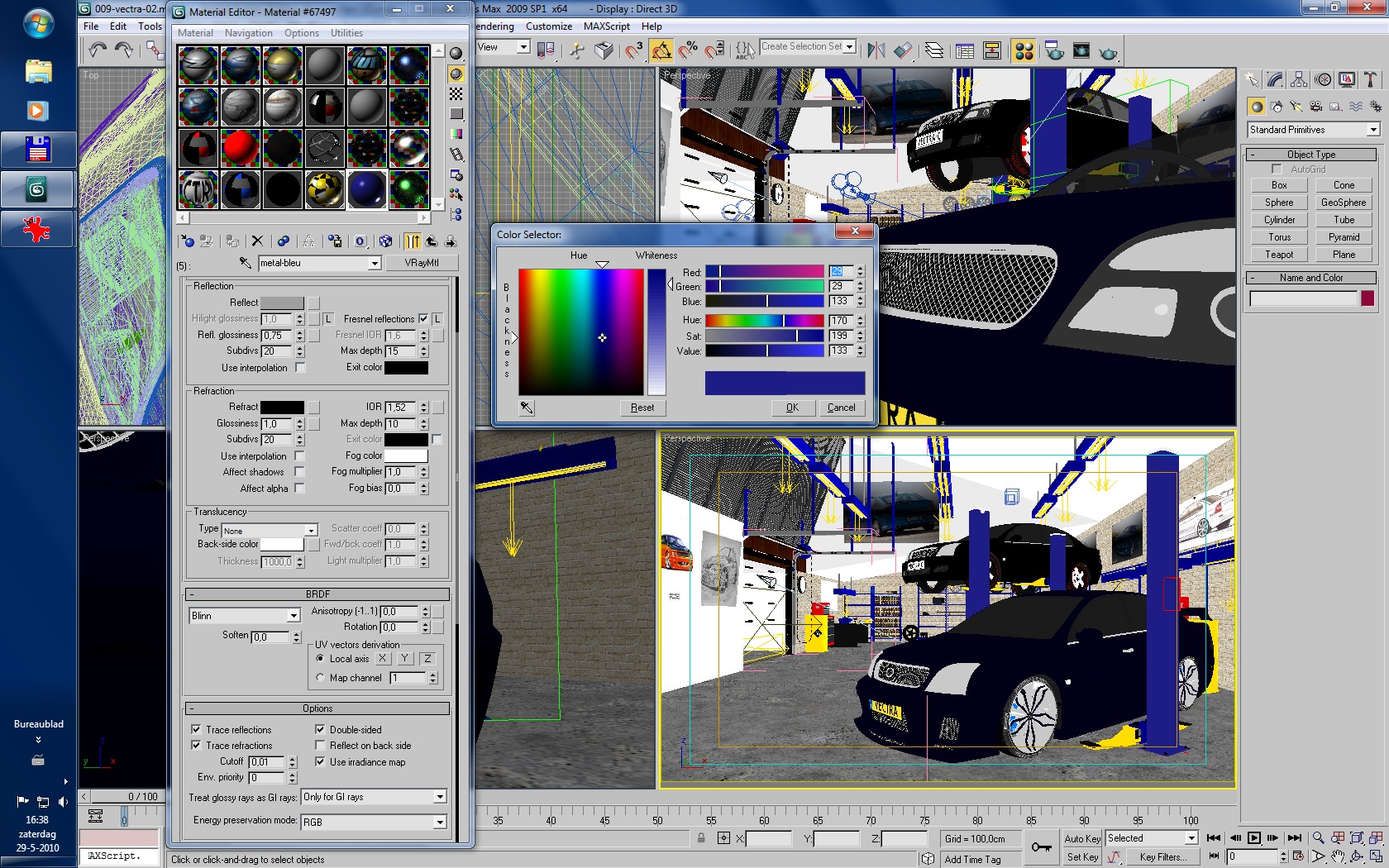 I thought we were taking about the car paint. Add some noise as I mentioned before. Use it on the diffcuse channel to affect the color, but also add the same noise to the reflection channel, to modulate how much reflection there is on the noisy parts. They should be less reflective. Make sure to scale up the noise, so it resembles dirt. Try and see if you can add a falloff to the txture, so it's mostly visible near the ground and then disappears as you get higher up.

It might be best if you use a procedural texture.
Boekanier

i was already back to the bleu color.
I will try to make dirt on it as you have described.

Make some dirt to the scene. 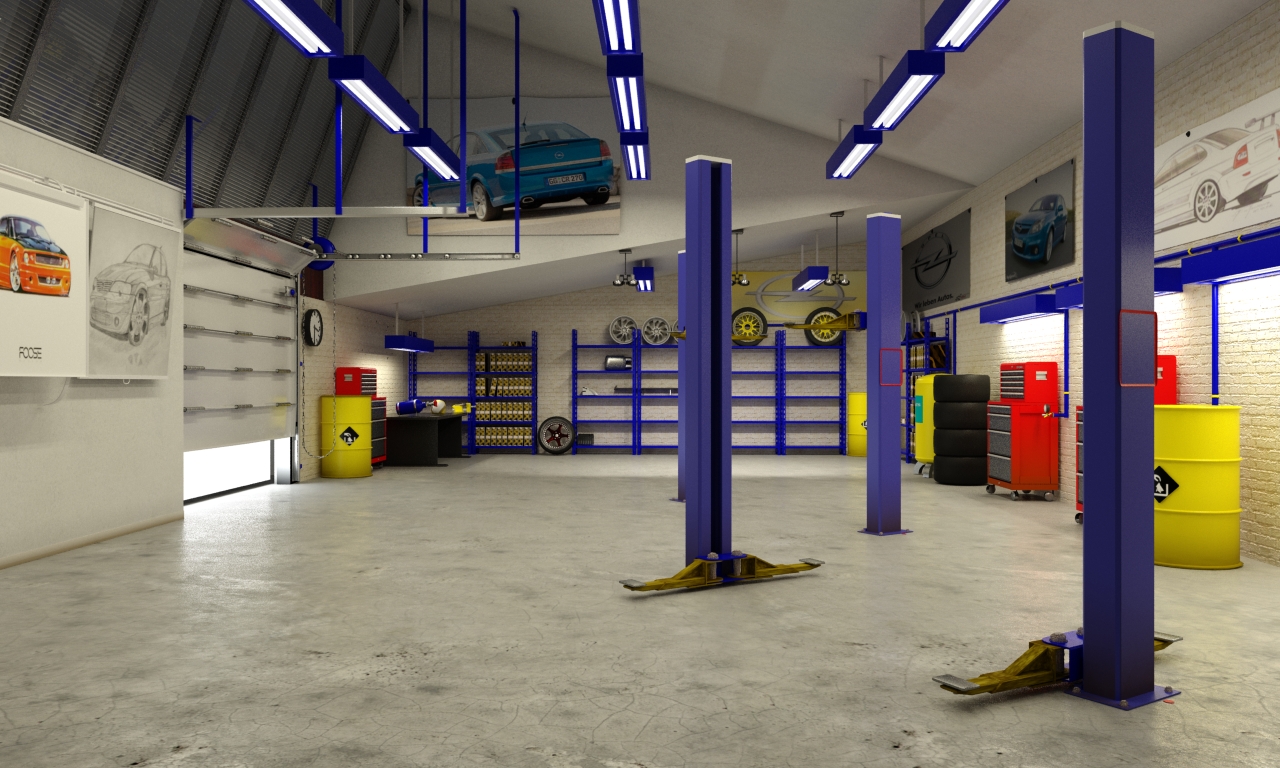 Dang, dunno why I didn't notice you replied - sorry for the delay.

I'd say the render is much better now. Adding dirt adds a lot to it. The lifts and barrels looks "planted" and more realistic now