A busy week this week, with an influx of new players and our highest turnout to date with 45 drivers over the course of the evening and 29 drivers on track at one point. As always this led to a rash of 'overenthusiastic' contact. Unusually, this time repeated warnings did not help - those who ignored the warnings are banned until after the TOC.

There was spectacular racing nonetheless, nerves of steel and lightning reactions were the order of the day!

Special mention goes to Sardjon for topping the next pack of 4 drivers who ended up separated by just 7 points.

REMINDER: This Friday at 19:00UTC is the LAST CHANCE to set a qualifying score for the upcoming Trial of Champions

A new season has begun, with more stats available on the events page and season points now being tracked! Previous seasons have had points back-fitted to them, so some overdue congratulations for previous victories go to **Jon 606**, **Jam 616**, and **Rauno**! https://piranmoto.co.uk/seasons

The first event of Season 4 went with a bang - gauntlet thrown!

Bookended by Death Alleys, filled with off-road action and *another* Death Alley, round 2 saw some spectacular wipeouts amongst some edge-of-seat racing and fighting.

On the top step this week is OK's **Rauno** - season 3's winner returns to successfully defend his event-wins-in-a-row record, finishing with 171 points and 7 wins, Congratulations!

Tracks for the points-scoring rounds are highlighted in the vote menu - !v to vote to change tracks.
Last edited by Racon, Tue, 25 May 2021 11:31.
Racon

A relatively low turnout this week, but spectacular action nonetheless with a distinctly rampy theme keeping people on their toes.

3rd place goes to MRc's **TimDC** with 132 points and 4 wins - still managing the podium despite an injury.

In the season standings, **Dlocky** moves ahead with 58 points to **TimDC**'s 56, and also takes the lead in all but one of the stats and averages, with an average of 8 wins per event!

**Flying ET** joins **J De Cnodder** with 50 points each, but overtakes in the standings and takes 3rd place due to race wins.

Honourable mention goes to OK's **Rauno**, already up to 7th place of 41 drivers depite missing the first week. He's also holding the only average not held by Dlocky, with an average of 14.5 podiums per event!

A bit of a mixed event with a strange apologetic vibe this week - no need to apologise if you're within the rules. *It's a DD event, we're supposed to be fighting!* We also seem to have an event podium that matches the current season standings - are we all giving the top guns too much space to fight amongst themselves?

Another week of fluctuating numbers, but action-packed nonetheless with some classics and some new combos. Motorway Madness lived up to its name in the NG2s and Celtic Midi seemed much smaller in the GT class!

It's 3 event wins in a row again for VM's **Dlocky** (one more to equal Rauno's record), with a monsterous 188 points and 11 wins - winning the event even before the penultimate round had ended with a margin of 49!

Shout out also to PM's **Jon 606** for a rare race win on the terrifying Motorway Madness track!

In the season standings, **Dlocky** extends his lead over the pack as **TimDC** falls back to 3rd place having left the event early. He also reclaims the only average he was missing from the set, with 14.6 podiums per event. **Flying ET** fills the place between, up from 3rd.

Our lowest turnout for a while, but there was still plenty of action with multiple death-alley style tracks. This week saw Dlocky's teammates Dan and Khaos join (as if he needs the help!) later on, and the VM train was on tour for the latter half of the evening - claiming 3 podium lockouts in the process.

This week's event was dedicated to the memory of CK, with many tribute skins and name colours making a fine sight, and all drivers sharing a minute's horn on the green light of the first race before setting off. This one was for you, CK.

It's a new record of 5 wins in a row for VM's **Dlocky** as he wins his record-equalling 8th DD event with 8 wins and 157 points! Congratulations again!

2nd place is MRc's **TimDC** returning temporarily to honour CK, claiming 140 points and 5 wins for him.

3rd place goes to VM's **Dan190NL** with 126 points, claiming a podium on his first full event. It looks like the VM domination is set to continue!

A special mention for Ivanov, missing the podium on his first event by just 2 points.

In the season standings, there's no change in position with VM's **Dlocky** leading **Flying ET** by 17 points, who in turn leads RTT's **J De Cnodder** by 7 points. 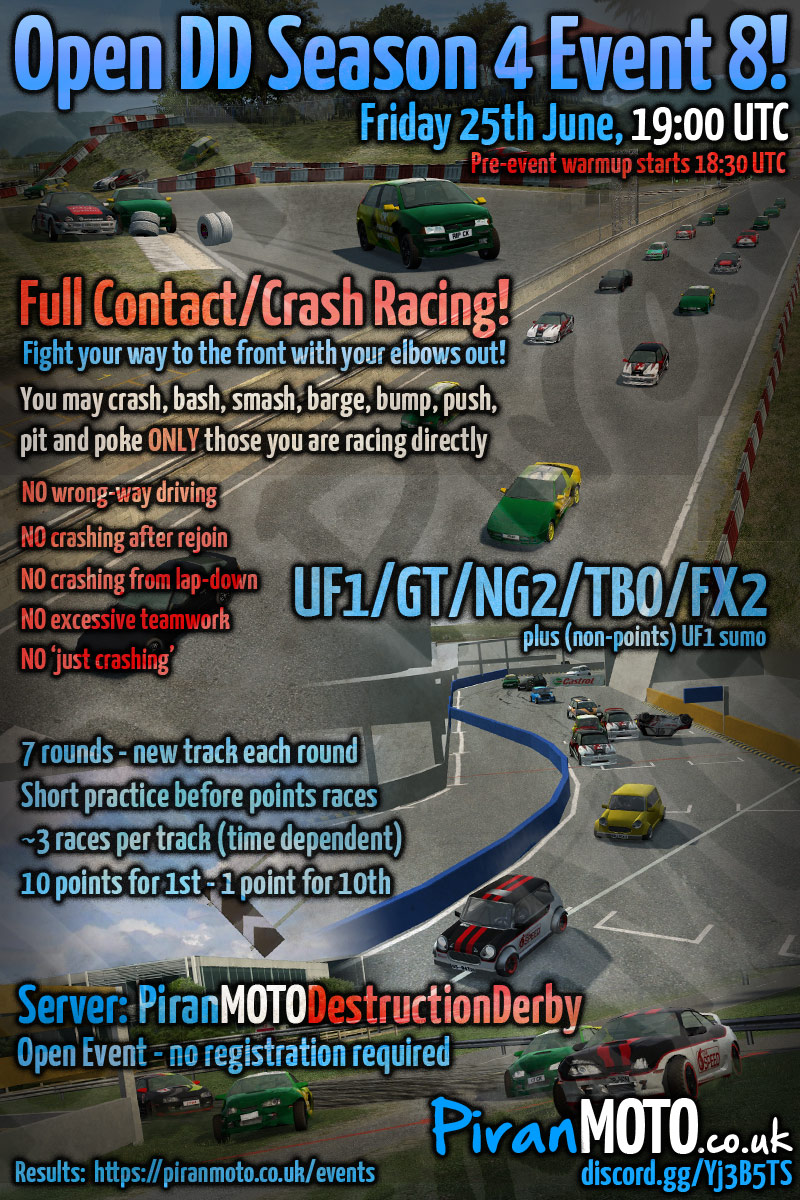 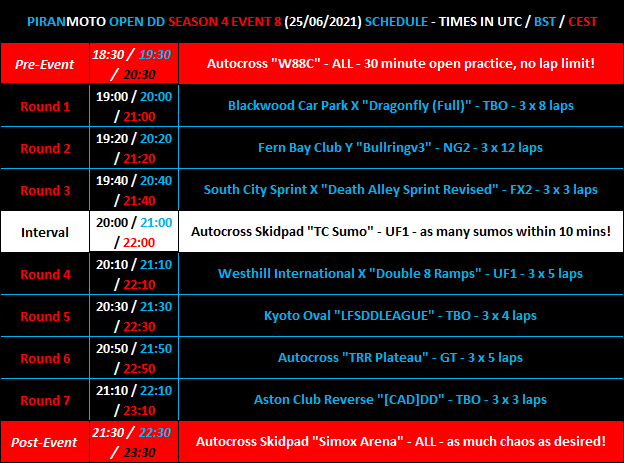