That was fun, i enjoyed it! Thanks Rony and cg kopkal.
Bmxtwins

Damn. The eternal Mayday Mayhem champ missed this chance to impose his superiority in carnage over you all.
Eclipsed

41 participants... That was the amount I wasn't expecting or was ready for,that's why even without time consuming custom gridding the event totally stretched out to 3 and a half hours,where 1 hour was taken for qualifying alone. So I had to remake the premade tables at results sheets and enter many drivers,so it took a while to set up grid for quarter finals. The rest went a bit quicker. At the end the main glory was taken by the Flaminator. Also as usually bonus run layout adittions made the race very difficult,I guess I'll go easier next year and leave the DNFs in hands of competitors.

First time in my life I see a derby race where only 3 out of 73 cars were crashed.
Zaabis

Thanks Rony! Such a fun. At least got my podium in bonus race

I saw that stream. Looks like canadians have problems with our STO speed.

im rewatching my stream VOD ... too much fun
Gutholz

Bonus layout was fun this time, good mix of chaos but one could still move ahead.
Now that there is custom startgrids..did you think about trying a new track? There might be some suitable places on Blackwood/Aston/Westhill that previously were unattractive because of the long drive from pitlane..but now..
Eclipsed

Nope - I'd like to keep this classic,as this track is short and has a good mix between skill and crash attack opportunities. But there's another event I organize in same style - the MayDay MayHam (in 1st may),there I tend to experiment with different tracks and cars. After Rockingham was released,was even thinking to make the event there as I had sights on 2 possible layout locations,but after driving them,they were so meh... Probably next one might be held at Autocross environment...
BTW - well,the results of yesterday's event might be out during next week. Tried today scanning qualifying mpr with lfsstats,but it showed me middle finger,for some reason it does not like anything more then 32 participants,heat mprs shouldn't be a problem,but I kinda lost motivation today...

It was great to race (crash) after so long break...

And of course see some great people on!
Flame CZE

Have you tried the dried out lake too?

That would be great actually.
michal 1279

The Crashmaaas event was more than a month ago.

When we will get the Scirro... I mean the results?

When the tyre phys... it's done.
Eclipsed 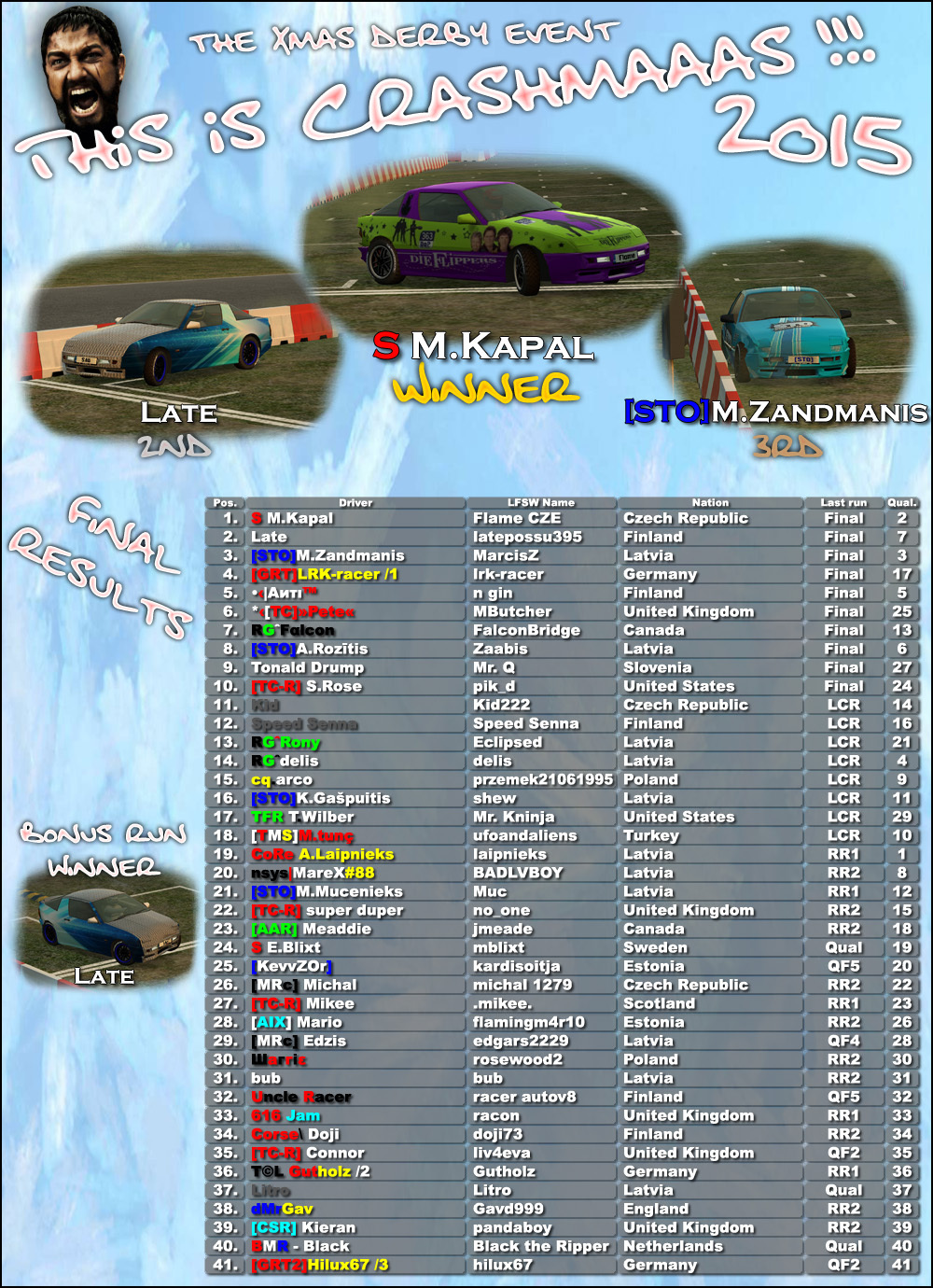 After successfully beating NDR's 2013 Kyoto 250 for longest withheld results,here are the 'This is Crashmaaas !!! 2015' results! Memories and emotions have faded during these few

months,but the glory of the winner remains,as he goes into history books as the 5th TiC winner - M.Kapal joins the list of the most dangerous and brutal racers of LFS! Withheld results wasn't the only record of this event - a total of 41 drivers took part last year,beating the attendance of 29 drivers seen 2013.

The last event proved once again - fast is not just an option here,the 2nd fastest driver of qualifying finished 2nd in his quarterfinal and semifinal runs,avoiding any relegation runs on his way to final. Allthough being the fastest marks you as threat to everyone willing high positions - qualifying winner A.Laipnieks was kicked out of track already in lap 1 of his QF run and missed out the chance to advance from relegation run to semifinal by 5 seconds. 2nd in the final standings is event newcomer Late,but 3rd for 2nd year in row - M.Zandmanis,keeping the tradition of having at least one latvian on podium alive. Interestingly between faster drivers there were also 3 outside-top20 qualifyers in the final. Last year's fastest race laptime was shared by 2 drivers - both M.Zandmanis and Falcon set 20.33 in their semifinal runs.

The very messy bonus run,lasting over 10 minutes,was won by Late,who lapped everyone at least once. Only 8 drivers were still running at the finish,while most of 29 starters were either outside of the track or rolled inside it,but also in one case - out of fuel.

Just 1.5 months left until next Crashmas event - as usually the X-mas derby will take place in 26th december,which this year is a monday. It will be as good as all the racers make it - I'll be providing the server,split drivers into runs according to the same system,you have to do the rest to get the annual crashing fun! See you on the track! Or outside of it...

Bring it on.
Flame CZE

Huge Win
1
2
This thread is closed