James May on the Argentina number plate controversy


The other stuff, yeah, Clarkson makes a game out of offending people who don't warrant that kind of abuse and it's ridiculous. But after hearing May talk about it, I think the number plate thing was purely a coincidence. He makes some logical points and I don't think he's normally one to defend Clarkson's antics like that.
Last edited by Forbin, Sat, 27 Feb 2016 16:51.
sinbad

Ok: you may be jealous to the core of his entitled, self congratulatory, over-privileged background. Your borderline obsession notwithstanding, you are quite entitled to think "I actually wish it was me", but it never will be. That is the reality of the matter.


Common sense: Do you think someone who used to watch (& enjoy) T-G regularly would give a "...." about what YOU are thinking?

This said, dark (english) humour was what made it special and more opened to non-gearheads, like it or not.
CardsetCrazy

Clarkson is one of the funniest TV personalities IMO.
petercollins

Clarkson is a dying breed. He would not be on tv at all, if he wasn't best mates with the UK PM. As I have said before, he despises those who adore him, like those on this thread. You see him as a hero, but he hates you. You are cheap scum to Clarkson. He makes this very clear.
petercollins

How naive are you? James May is the only one who has ANY chance of continuing his career on UK television with the BBC. He was so close to distancing himself from the racism and misogyny of Top Gear, when he got dragged back in accidentally. And now he is doomed to Amazon TV and selling dishwashers, where previously he was on the cusp of becoming his own man. His tv series on reviving children's toys like lego was bringing in 5,000,000 a week.

He must be kicking himself he didn't get out of Top Gear when he had the chance, before he was branded as one of Clarkson's middle aged gang.
petercollins

And it isn't "English humour". The English hate Clarkson more than anyone. The show would have been cancelled 10 years ago if it wasn't for the sales outside of the UK.
Racer X NZ

BBC bosses are reportedly ‘panicked’ after Top Gear show runners began spending an extra £200,000 on each episode.
The budget has ‘soared by 50% amid fears it could be a flop’ claimed the Daily Star, whose BBC source said that it was getting ‘out of control’ behind the scenes.

The show has already been cut back to six episodes rather than the expected 12, and they’ve also brought on board several celebrity guests including Tinie Tempah who was flown out to South Africa for a segment which was filmed this past week.

Not content with six full-time presenters, BBC’s Top Gear has now added English rapper Tinie Tempah as a celebrity guest.
The musician has joined Friends star and new co-host Matt LeBlanc for a driving challenge in South Africa which will see the pair go up against Chris Evans and Texas singer Sharleen Spiteri.
Racer X NZ Pressure is continuing to mount on Top Gear bosses after it emerged the highly controversial scenes of cars 'donutting' near the Cenotaph war memorial cost licence fee-payers around $240,000 to film.

Chris Evans has sought to play down his role in the filming of the sequences, in which fellow presenter Matt Le Blanc and a stunt driver filled Whitehall with smoke and burning rubber by wheel-spinning in the shadow of Britain's main war memorials.

But, despite apologising, Evans has insisted he wasn't behind the idea, saying: 'This isn't a shoot I'm particularly involved in. I was away with family over the weekend'.

The scenes, which required a council and police-approved road closure and took a large film crew hours to shoot, will now not feature in the new series of the show, which is due to air in May.

Yes, welcome to the ALL NEW TOP GEAR....

Back in the olde worlde charm though. Their former show Top Gear has been at the Centre of controversy over alleged scenes of cars "donutting" near the cenotaph war memorial in London.
Last edited by Racer X NZ, Thu, 17 Mar 2016 08:23.
k_badam

the "stunt driver" was ken block and would have really like to see this in the new series (if it was any good).
Racer X NZ

The ALL NEW Top Gear is VERY PC and so anything that may 'upset anyone' is banned. "Speaking on his BBC Radio 2 show, Evans said he “completely understood the furore” around the photographs and admitted it had been “unwise” to film anywhere near the Cenotaph.

He said: “It doesn’t matter what actually happened, it doesn’t matter what the circumstances were that could explain this away, what is important about this is what these images look like and they look entirely disrespectful which is not and would never be the intention of the Top Gear team or Matt (LeBlanc).

“On behalf of the Top Gear team and Matt, I would like to apologise unreservedly for what these images seem to portray."

And the apology I want as I feel triggered that any adult would think that those pant's make you look mature and worth the money you are payed. Come on Chris, say it.....

"I also want to apologise for looking like a complete plonker internationally by thinking 'Charlie Brown PJ pants' made me look cool, They didn't !!!!!!!" The press do seem to be looking for anything to knock Chris Evans and the new TG...it is a bit tiresome. Sure it was a bit daft to bait them with donuts in the vacinity of the Cenotaph but it was approved by someone from the council....not as if TG just turned up on a Saturday unannouced and started burng rubber.

Not too long to wait for the new TG now....just a few months....looking forward to it.
jonmrbean

Most disliked trailer since Ghostbusters 2016?

Dunno, looks pretty cool to me. Just isn't the Top Gear that we're used to with the old hosts, but still looks cool.
CardsetCrazy

"When a sneeze makes the 1 minute highlight reel you know that you're in trouble...﻿"

From the comments section

I can hardly wait.
Let's see how good their Reliant bit is ....
https://www.youtube.com/watch?v=QQh56geU0X8&ab_channel=TopGear
Seems to be a bit forced and copycatish really, why not focus on Morris Marina's just to be different ?

And their latest SNAFU,

"Ahh, things are going from bad to worse for the reboot of Top Gear, with the latest blow costing an estimated £500,000.

Eek - these blunders clearly do not come cheap.

t has been claimed that three of the BBC show’s new presenters, Rory Reid, Sabine Schmitz, and Eddie Jordan, alongside forty crew members were left stranded as they tried to make their way to Kazakhstan to film for the show - with the scenes costing about half a million pounds in total.

However, they were forced to abandon the trip when they got held up in Moscow and all flights were 'grounded'. #(Yeah, Right)

After hearing about Top Gear they probabily didn't want to be Borated again.
http://www.webpronews.com/borats-fake-kazakhstan-national-anthem-played-at-international-sporting-event-2012-03/

(A BBC spokeswoman told The Sun: "Through no fault of the Top Gear team, the airline carrying them was not permitted to fly from Moscow to Kazakhstan and so they returned to London.) 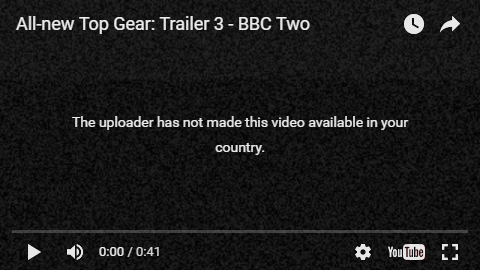 Just imagine Top Gear USA but with Joey from Friends, the every eloquent Eddie Jordan and random other British peoples. That appears to be the aesthetic they're going for here, wrapped up in an "oh doesn't it rain a lot in England - cliche" blanket of B.S.

Not inspiring at all to be honest.
Bmxtwins

RacerX is one of those guys that gets tagged for plagiarism if he were in university. Literally straight copy and pasta salad
Racer X NZ

Seems more than a bit stupid having a promo that isn't availible in countries you want to sell the silly program to ... !!!
And the BeeB had just given lots of the old Top Gear to us to make us interested in the new series.

You just sad that you can't get the vid ???
Once your brave enough to leave your 'safe space', try this link

And your pointless point would only apply if I claimed my posts as my own work, without me providing the links I do.......
I know, your just traumatised that 'Bubble Boy' is not going to be your Pres. So sorry for that -

"At each stop, students have complained to administrators that Trump's very name makes them feel unsafe. In Michigan, students actually called the police. Just today at the University of Tennessee at Chattanooga, a member of student government reportedly has been asked to resign for a pro-Trump chalking. To be fair, the chalking in question did include a drawing of the notorious red "Make America Great Again" hat, making it especially horrifying."

Time for a new 'Safe Space' on this thread - "Former colleagues and friends have said Evans is a 'bully' and a BBC insider claims he recently reduced an employee to tears after screaming at her.
Mr Revell said today: 'It doesn't surprise me. If this was anyone else, they’d have been suspended'.
He also claims that the BBC has a file of complaints about Mr Evans 'yet they've nothing about it'."

"Chris Evans has found himself at the centre of new claims that he is a bully in the workplace, who couldn’t help flashing his (MY EDIT* (Please insert the current PC word for what used to be a common name for male# reproductive parts)).

The new Top Gear host, who the BBC defended this week from claims that he is more ‘volatile than Jeremy Clarkson’, has been the centre of discussion on a Facebook page, according to Heat.com and The Sun."

So, I'll now do my best to move into the current world view, and do my bit to be inclusive.

* I'm sure if the previously accepted word is used by me here some SJW on the site will have a melt down and feel 'Gender Threatened' or something like that. Then demand I get banned for 'Non PCness' or something'


# See below, Personally I chose to sexually identify as an Attack Helicopter^

Couldn't watch the new trailer (not available in my country) so I just pressed the dislike button...
jonmrbean

Finally the new Amazon show has a title - "The Grand Tour"