This is probably the most expensive and least documented shifter out there. After debating for some time, I decided to purchase one. It arrived today. I will try to document all details on the shifter for the benefit of anyone else who would like to learn more about it. 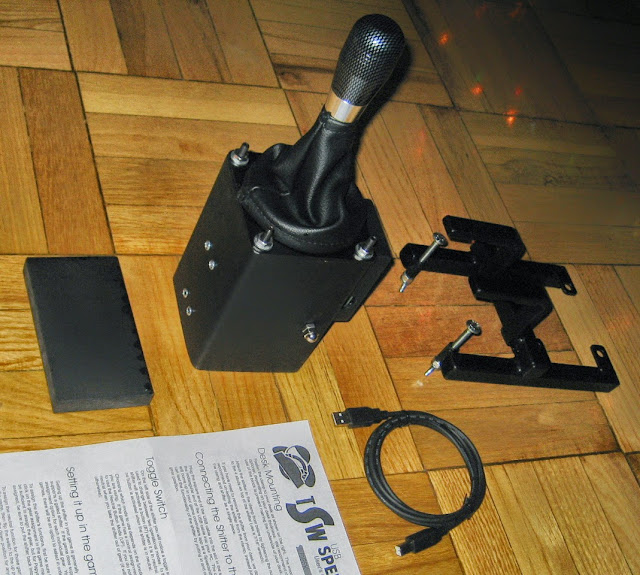 1. Build Quality
The shifter is all metal. All internal components are metal. The boot is made of soft leather. Only plastic component is the external housing of the electronics which also bears the TSW logo. It is extremely solid. If you can find a way to break anything on the shifter, you need to be entered in the Guiness Book of World Records!

2. Mounting
The mount is surprisingly solid. Although from the images it doesn't appear to be stable, it is actually very, very stable! I found a way to mount it in my Obutto, and surprisingly it worked quite well. In fact, I feel that it's mounted much more solidly than my previous G25 shifter. I really don't see how anyone could yank this out of place. Interesting bit is you don't need a lot of force to tighten the clamps.

More on mounting later on.

- Reverse Gate
The reverse gate position is specified at order time. I ordered right and down. Same as G25 setup (although that's really push down into 6th.) The TSW shifter has a separate gate for the reverse. The reverse gate is spring loaded, so it takes effort to push it over into the reverse slot. That way you can't accidentally throw it in reverse. 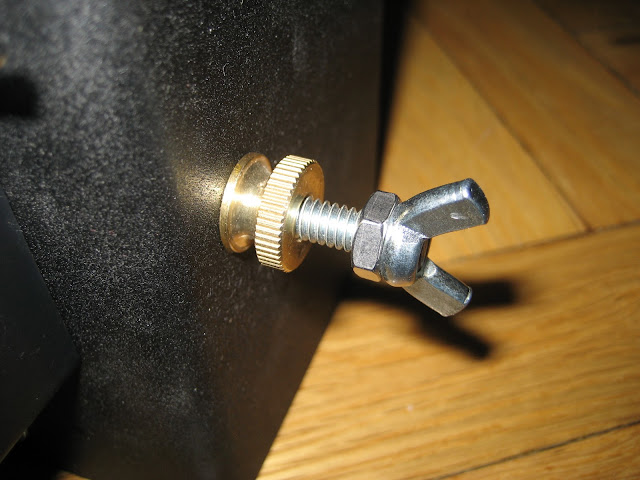 - Neutral button switch
There is a small switch that toggles the shifter in either pressing a 7th button when in neutral, or pressing nothing. This has to do with how some games recognize the shifter. 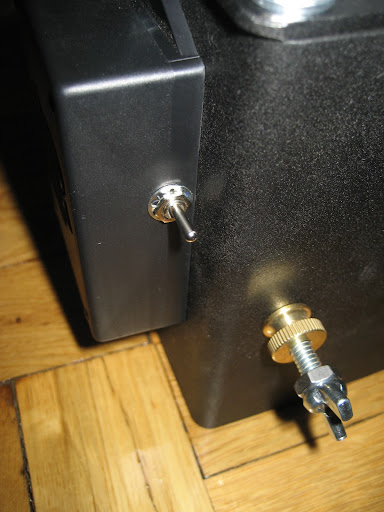 - USB Plug & Play
The shifter plugs with a USB cable directly into the PC. There are no drivers to install. Windows automatically recognizes the shifter and maps 8 buttons to it. 6 gears + 1 reverse + 1 optional neutral. 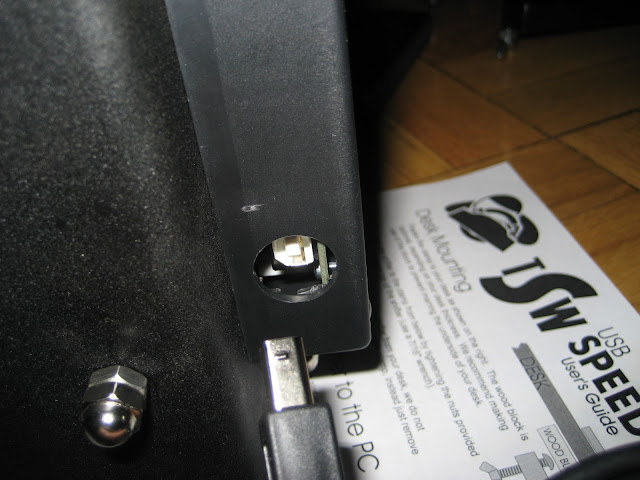 - Mount
The shifter can be mounted a number of ways, however some positions are limited by the external electronics housing box. Best way to mount the shifter is as advertised. However it is still quite easy to be creative and find other ways of mounting it. 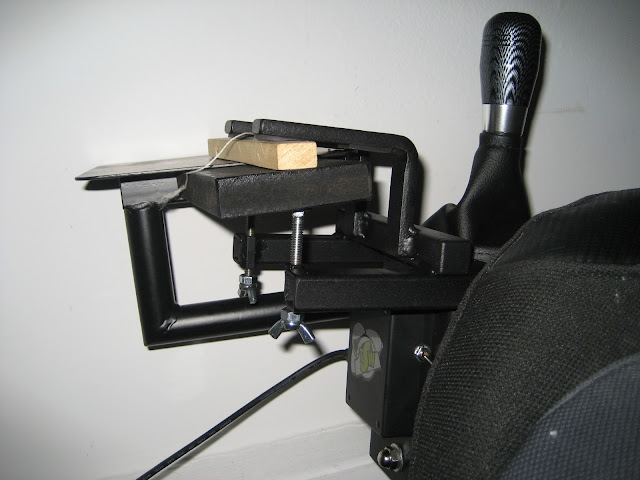 4. Feel
This is the probably the most important feature of any shifter. I'll break it down.

- Shifting Force
Surprisingly the shift offers only slightly more resistance than the G25's shifter when sliding it in gear. Very little force is required to move the shifter into the gates. Fanatec shifters on the other hand require much more force to put into gear. However, since it's all metal, you can bang it around as much as you want and shift it as hard as you want! Even the manual says best way to shift is hard and fast! If you shift hard and fast, you don't even notice that very little force is required to shift. In fact, it feels as if you're really forcing the shifter into the gate. Feels almost the same as when you go to the arcade and bang around those shifters. Solid as a rock.

There is also a certain mechanical feel to it, as if you're shifting metal components internally. All of this is due to the ball detent mechanism of course, and even though it is quite simple, it still feels good. Overall, provides a very pleasant feel and gives you confidence in shifting.

Update
Turns out that if you tighten the nut on the bottom shaft it tightens the overall gate movement resistance. So you can actually adjust how easily you can throw the shifter into and out of gear.

- Gates
The gates are guided by a metal gate plate. There is a tiny bit of play in the gates, however nothing major, and certainly won't cause you to miss any shifts (unlike the 3-4 slots of the G25 shifter.) The gears are also engaged quite early when shifting into the slot, so gear changes are quite fast.

- Throw
Even though the shifter sits taller, the throw is not long at all. It's actually quite a normal throw. A bit longer than the G25's shifter. About the same as a short shifter on a real car. I didn't need much time to get used to it Feels quite natural.

5. Internals
Everything inside the shifter is metal and can be seen by just looking under the shifter. The shifter housing has no bottom! 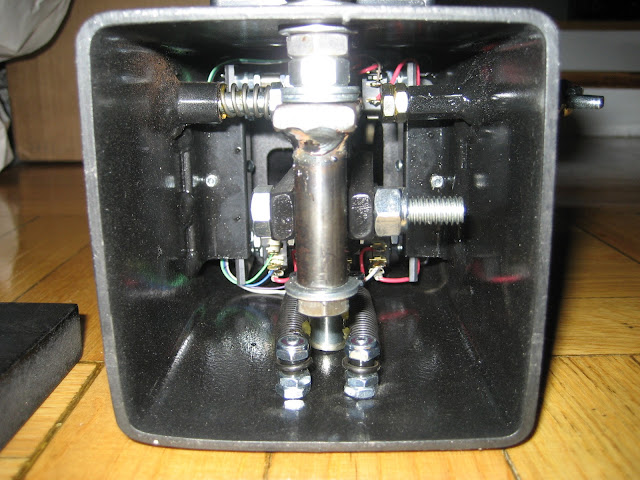 The shifter works pretty much the same way most of the shifters on the market do.

There is a ball detent mechanism that keeps it in gear, and two parallel springs that keep it centered. 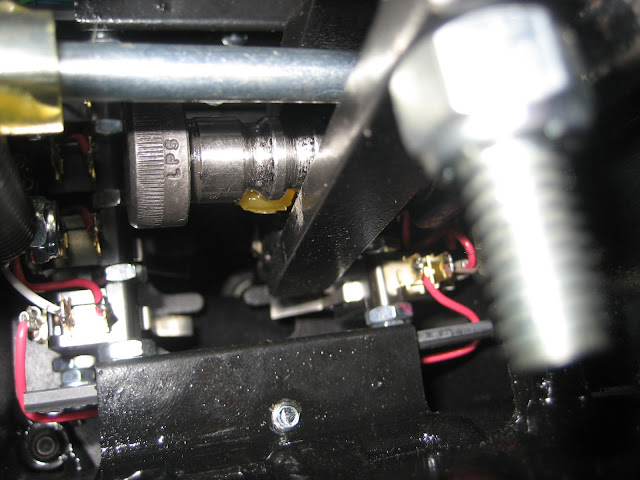 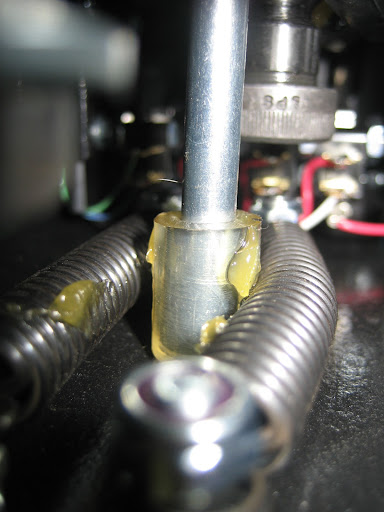 The gears are guided by a metal plate which is under the leather boot. 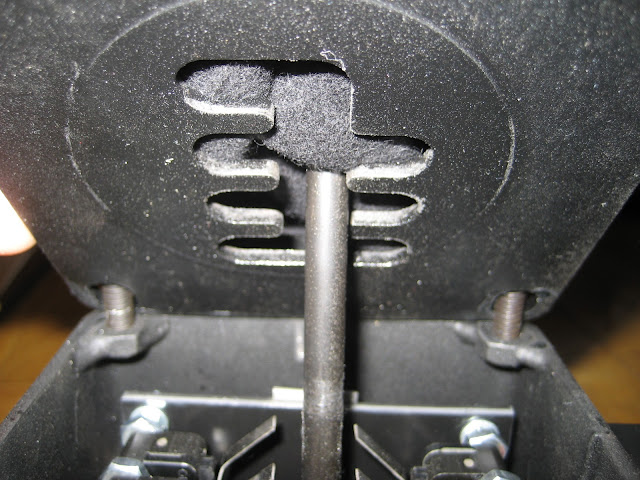 Each gear is selected via button that has a long metal extension that is depressed when the shifter is in gear. 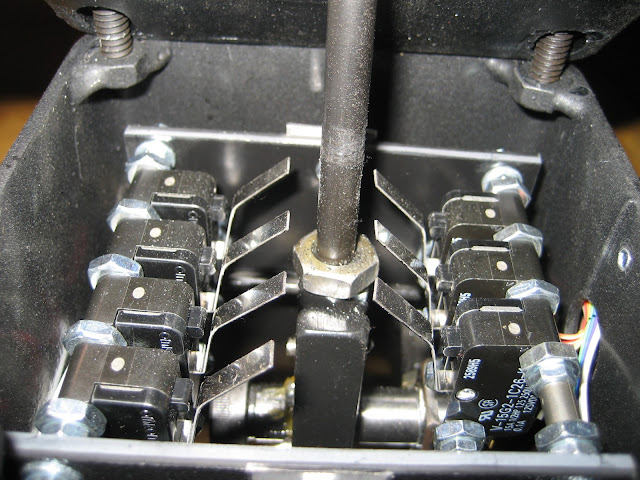 There is grease on the internal components so I don't advise to stick your fingers in there. ...or any other appendages.

6. Modding
So far I'm just taking guesses at what could be done to the shifter by looking at it.

Not sure how much potential this shifter has for modding, but definitely looks easy to disassemble and reassemble. Given that all internals are exposed from underneath, you don't really need to do much if you want to do stuff to it.

- Knob
It is not possible to mod this yourself. Choose carefully when ordering. The knob is attached via a very tight locking mechanism and TSW does not recommend taking it apart as the procedure is complicated. They will happily change it for you if you send back the shifter though.

- Centering spring
It looks quite possible to replace the centering springs with stiffer ones, or even shove something in them to make them stiffer.


7. Value
At nearly $400 this is an expensive accessory. You can easily accomplish the same tasks with many other shifters, even mod some of them to get them to your liking. However no other shifter is made out of all metal components. It also looks very maintainable in the long run, and appears that it should easily outlive any other peripheral you may own.


I'm happy to answer any questions about it, as I personally had a very hard time finding info on this shifter.

Thanks for the detailed review and pictures, and the effort of writing it for us

Not that i'm going to buy one

And i really LOVE the costom stiched leather knob and boot you made! Great work!
Last edited by johnniewalker39, Tue, 4 Mar 2014 17:10.
danielroelofs

As my wheel is about to tell me to do the driving myself.. I am keeping my eyes open to get a new one. Just so far I am thinking of buying the Logitech G27 wheel with the TR500S shifter. The G27 shifter just doesnt feel close to good to me.

I agree this is an excellent review! I'm surprised there weren't any replies when it was originally posted three years ago.

I wonder if TSW has made any alterations to the shifter to improve its resistance when changing gears since 2010? Any one bought one recently? Is it still too light?