After some delay in delivering the official result of the final race of the season (and few other delays...), we can finally conclude the second edition of the Master Race car's E-Challenge championship.

First of all I'd like to thank to everyone involved in this project - The Master Race car team who provided all the necessary infrastructure and who's members were an incredible helping hand; the New Dimension Racing team who was responsible for highly professional direction of all official sessions; the Simbroadcasts.tv team who delivered incredibly exciting broadcasts from all three championship rounds; the Live for Speed developers who's hard work and willingness to experiment made all of this possible in first place; and last but not least to all the competitors who took part in the championship and delivered exciting racing.

We had 3 exciting races at 3 unique layouts across 2 city environments. As the E-Challenge was, is and will be an unique racing competition with many unique features and never-tried-before concepts, we hugely admire all drivers who entered this uncharted territory and bravely faced all the new challenges we put against them.


The defending champion Jimi Virtanen had a tough task to prove he's worth it - over 50 challengers registered in attempt to dethrone him, but in the end it was Jimi who finished all three events on the podium, winning two of them and conquering the driver's championship table with 69 points (haha, nice).
The most active S1DUS driver Niko Puntola tried his best to beat Jimi on the track, but even his three podium places (third, second and first in this order) were not enough to do the job and secured only second place with 58 championship points.
In third place, another S1DUS driver Gábor Gyüre had to skip one of the rounds due to technical difficulties, however his strong results in other two events (two second places) were good enough to earn the third place in the standings with 36 points.
Honorable mentions go to Dawid Góźdź and Jared Meade, who ended up in 4th and 5th place respectively.

A special honorable mention goes to Volfgangas Gudys, who despite being one of the slower guys in the competition was still fully determined to attend all three rounds. 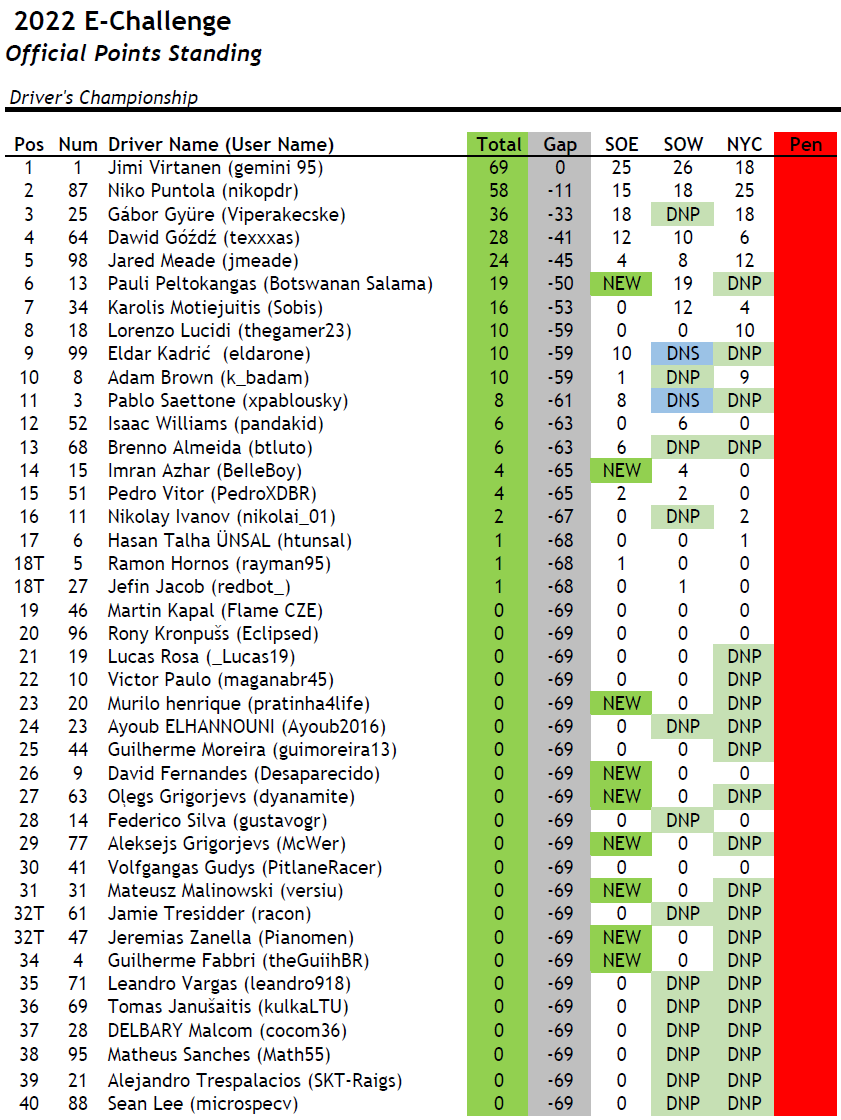 In the teams championship things were much more exciting: entering the final round, Master Race car had 3 points advantage over S1DUS, while SAVAGE SimSports and Last Lap Motorsports were level on points in the fight for the third place.
But it was S1DUS team who thanks to the strong performance in final round took the overall lead in the championship with 113 points.
Master Race car team didn't have the upper hand and had to settle for second place with 97 points, followed by SAVAGE SimSports whose entrants were more successful in the season finale and their 24 points were enough to get the third place ahead of Last Lap Motorsports.
Honorable mention goes to Race Green Autosports team for finishing in top 5, beating the Sim Broadcasts team by a single point. 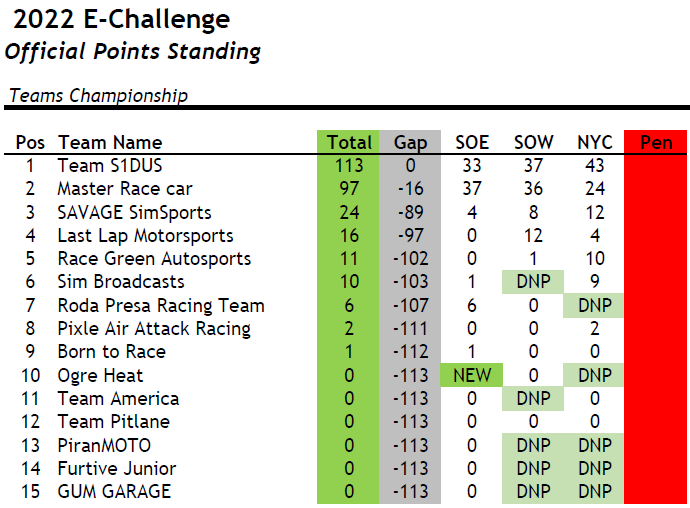 The Master Race car's E-Challenge Champion Award goes to Jimi Virtanen, who undeniably won the championship and our hearts. Let's see if he can remain on the top spot after future third edition of E-Challenge with 10€ in his pocket.

The organisation team evaluated the efforts of all competitors and determined the group of 5 drivers with highest driving standards who are equally eligible for this prize. Unfortunately the clean driving cannot be properly measured and therefore it is not possible to pick the one driver without encountering the possibility of bias and favoritism. Therefore (as stated in the rules) the winner of this prize will be determined in a public draw, which will happen on 13th of September during RTFR broadcast, using randomly generated result. Before the draw all eligible drivers will be contacted with further information about the draw process.

Both monetary prize winners will be then contacted in following weeks with payment information; preferred payment method is PayPal.

Despite the cold start in the first edition, the second edition of E-Challenge was a huge success.
This sets a high bar for the third edition, which is already being worked on behind the curtain.

We can't give away everything, but we can tease you with simple facts about what's being prepared:
New competition vehicle, new tracks, new event format, new strategic elements to play with,... and more and more!
We listened to the feedback we got in the post-season driver survey and try to accommodate some of the great ideas and wishes.
Speaking of the survey - follow this link to see all the responses and reflections the drivers and organisers had.

Thank you for being part of the E-Challenge, see you around in few months when the third edition of E-Challenge is unveiled!
Last edited by michal 1279, Tue, 6 Sep 2022 09:56.