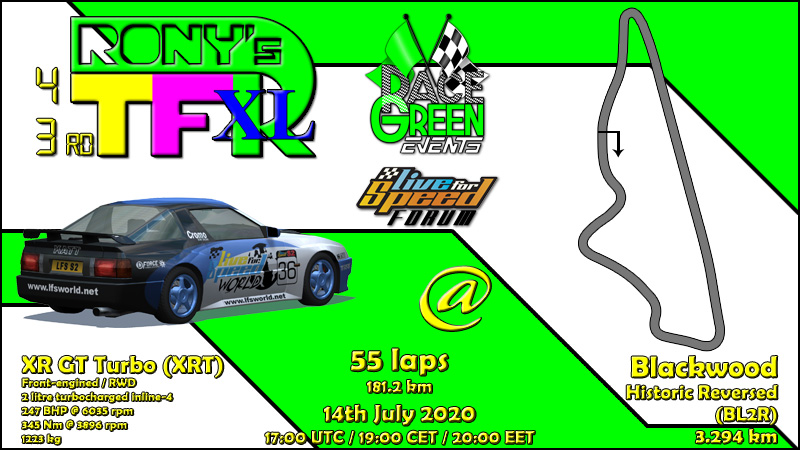 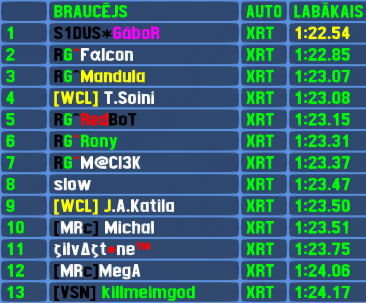 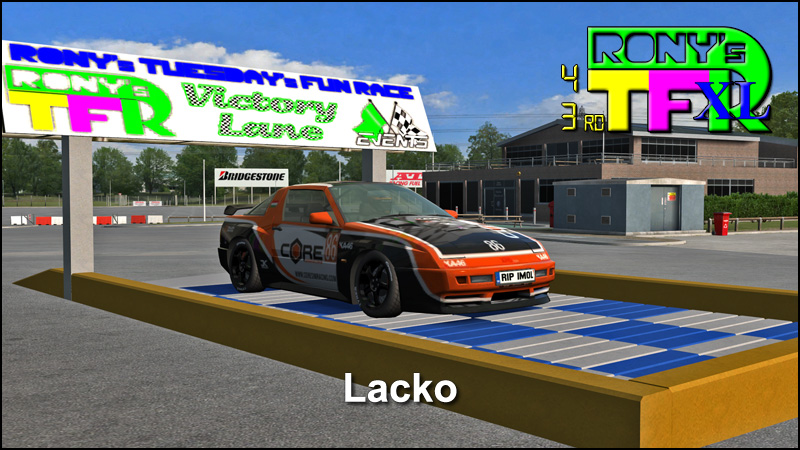 This race featured a demo combo from older LFS ages that actually was never there - XRT at the reversed Blackwood's GP track scipping the chicane. Both car and track should be well known for the drivers,so it was more focusing on the racing than getting used to unknown stuff.

After 4 successive events where the combo picker did not arrive,it looked like this will be the 5th one,but after qualifying Lacko broke this streak and used the rule which allows previous winners join the race as long there are free grid spots - and he used this chance well to climb up the standings and keep the gained lead also after his late pitstop. With this performance Lacko joins the winning streak club - he is the 7th driver,who has won back to back RTFR XL races,increasing the total of his wins to 3 and of his top5 finishes to 5. His countryman Gábor set the fastest lap in both sessions (both are his 1st),but could only repeat his best finish and only top5 finish 2nd - but he also clocked the 4th closest finish in RTFR XL races. Just like Gábor,Redbot was also able to set faster lap in race than the winner,but finished just 3rd,which is his 3rd top5 finish,Michal finished 4th scoring his 4th top5 finish and the leader of 13 laps earlier in race Falcon finished 5th which is his 3rd top5 finish.

* FUN FACT OF THE MONTH :
Some configurations have been used twice or even 3 times so far,the Blackwood Historic reversed was used for the second time. Guess who won the previous race at this track? Yes,the same guy as in this race - Lacko. It was 24th RTFR XL running the RAC.

* CLOCK PITTER OF THE RACE :
Practice makes perfect - 10.11 seconds workless pitstop for the veteran in this category T.Soini. But it's also worth to mention Mandula's straight 10 seconds pitstop,but he did it with help of fueling.

* FIELD RUSHER OF THE RACE :
12th to 1st - there's not much calculations needed to see the best in this category,Lacko was more that twice as good as Michal,who had "only" 5 positions upgrade.


Currently there is no info about next RTFR XL race scheduled 4 weeks after this - winner still has time until tuesday to reply with his combo choise. But already next week the normal RTFR will return with one of the street legal cars,after which Race Green Events will go to 2 weeks summer break.